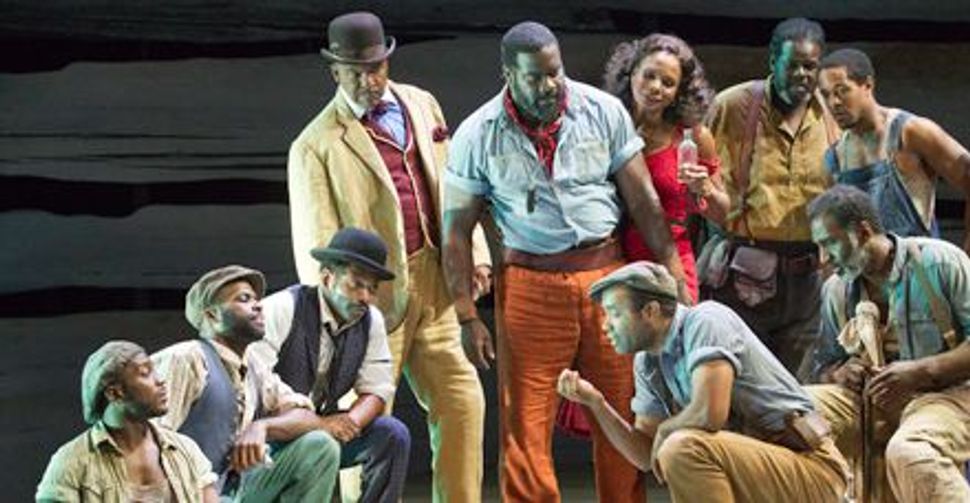 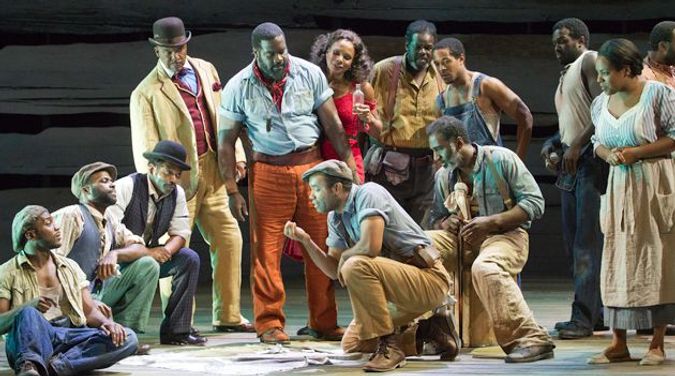 An Opera Changes for a New Century: The American Repertory Theater?s production in Boston. The show is now on Broadway. Image by michael j. Lutch

George Gershwin was insecure. He never showed it at high-society parties, where he could always be found perched at the nearest piano like a king on his throne. (He played incessantly. Once, when Gershwin wondered aloud if his music would be performed in 100 years, his friend Oscar Levant quipped, “It will be if you’re still around.”) Nevertheless, an unending stream of critical onslaughts from the “serious” music camps left him drained of confidence.

The late eminent composer, conductor and musicologist Nicolas Slonimsky told me of a lunch date he had with Gershwin during which the songwriter grabbed a napkin and began writing music on it — just to prove that he knew standard notation! It was for this reason that America’s greatest musical talent asked for lessons from Maurice Ravel (“Why be a second-rate Ravel when you can be a first-rate Gershwin?” was the reply) and then decided to study with a dry musical academician named Joseph Schillinger. “The European boys have small ideas, but they sure know how to dress ’em up,” was the explanation Gershwin offered to Vernon Duke for these pursuits.

Meanwhile, the “European boys” began to dress up their own music with gestures stolen right out of the Gershwin playbook. But Schillinger’s lessons were helpful, particularly in honing the sophisticated compositional techniques Gershwin employed in his groundbreaking opera, “Porgy and Bess.”

There was little hope that the criticism would end with this masterpiece, though, particularly because the opera was based on the lives of African-American Gullah descendants living in South Carolina, and it employed a black cast (Al Jolson wanted to star, but Gershwin was adamant). Art music had grappled with the legitimacy of using folk elements for centuries, attracted to the “primitive” nature of folk art but scornful of the “low” artistic (and moral) values it represented. “Porgy” was stuck in that middle ground.

In addition, some critics complained of what they saw as racial stereotyping, characters too broadly drawn, acting within a failed theatrical framework that tried to combine satire and melodrama. Even Duke Ellington, in a rare example of what appears to be jealousy, put down the work. (A colleague of mine once cited the ungrammatical song title “Bess You Is My Woman Now” as an affront to blacks; I noted that the grammar of Ellington’s song, “It Don’t Mean a Thing If It Ain’t Got That Swing,” remains unquestioned.)

The idea that “Porgy” is inauthentic and demeaning was fodder for the reformulations in the production now appearing on the New York stage, which claims to make the characters more real and more relevant relevant. Composer/lyricist Stephen Sondheim famously defended the original in a letter to The New York Times. “These characters are as vivid as any ever created for the musical theater…. Porgy, Bess, Crown, Sportin’ Life and the rest are archetypes and intended to be larger than life,” he explained. “It makes you speculate about what would happen if [the director] ever got her hands on ‘Tosca’ and ‘Don Giovanni.’”

In a feeble defense of the changes, The New Yorker’s Hilton Als cited negative views of the work expressed by the late composer and critic Virgil Thomson, whom he described as a “Southern” composer. There are some serious problems with this. First, Thomson was from Kansas City, Mo., not exactly the Deep South. Further, he knew nothing of the culture on which the opera is based. And Thomson never cared for Gershwin’s music, complaining at one point about his “gefilte fish orchestrations” — whatever that means. Nor did he like the jazz that Gershwin so enthusiastically embraced.

So what, we might ask, did Gershwin know about the characters he depicted? He spent a good deal of time with DuBose Heyward, the writer of “Porgy” (and co-librettist for portions of the work), who was of Gullah heritage. The composer even moved to Folly Island, S.C., in order to spend time with the people on whom the opera is based. Heyward said that Gershwin’s visit was “more like a homecoming than an exploration,” and the residents seemed to agree. Gershwin even joined in on a “shouting” ritual at a community meeting. “I’m over 70 years old, and I ain’t never seen no po’ little white man take off like you,” one elderly resident said. “You could be my own son.” Gershwin’s depiction of this culture was a labor of love, and a tribute.

What about the claims of racism? As Howard Pollack points out in his biography, “George Gershwin: His Life and Work” (University of California Press, 2007), the opera was as far from minstrelsy as a work can be. While coaching the cast in “I Got Plenty o’ Nuttin’,” the composer explained that the tune was not happy, but actually “a bitter song….” He instructed, “You’re making fun of people who make money and to whom power and position” are important.

For the latest production, a new, happy ending to which Sondheim had objected, has now been dropped. But there are a lot of other alterations, apparently including revisions of the orchestrations, harmonies and keys. Some of the theatrical changes are questionable: Porgy no longer gets around with a goat cart; he now uses a cane, despite the fact that the original inspiration for Heyward’s vision of “Porgy” was a real character in Charleston, S.C., known as “Goat Sammy,” whose tragic life made him a “crushed, serio-comic figure.” Which is more authentic — the contemporary cane or the original goat?

The 1926 presentation of Heyward’s play by New York’s Theatre Guild, James Weldon Johnson wrote, “removed all doubts as to [the Negro’s] ability to do acting that requires thoughtful interpretation and intelligent skill.” Similarly, the opportunity presented to the black singers of the 1935 opera was historic. It was a moment to be applauded. The brilliance of Gershwin’s vision made it all possible and continues to open up possibilities for the stars of today.

Stuart Isacoff’s latest book is “A Natural History of the Piano: The Instrument, the Music, the Musicians — From Mozart to Modern Jazz and Everything in Between” (Knopf, 2011).