Family Tales and Mystery Amid the Markers 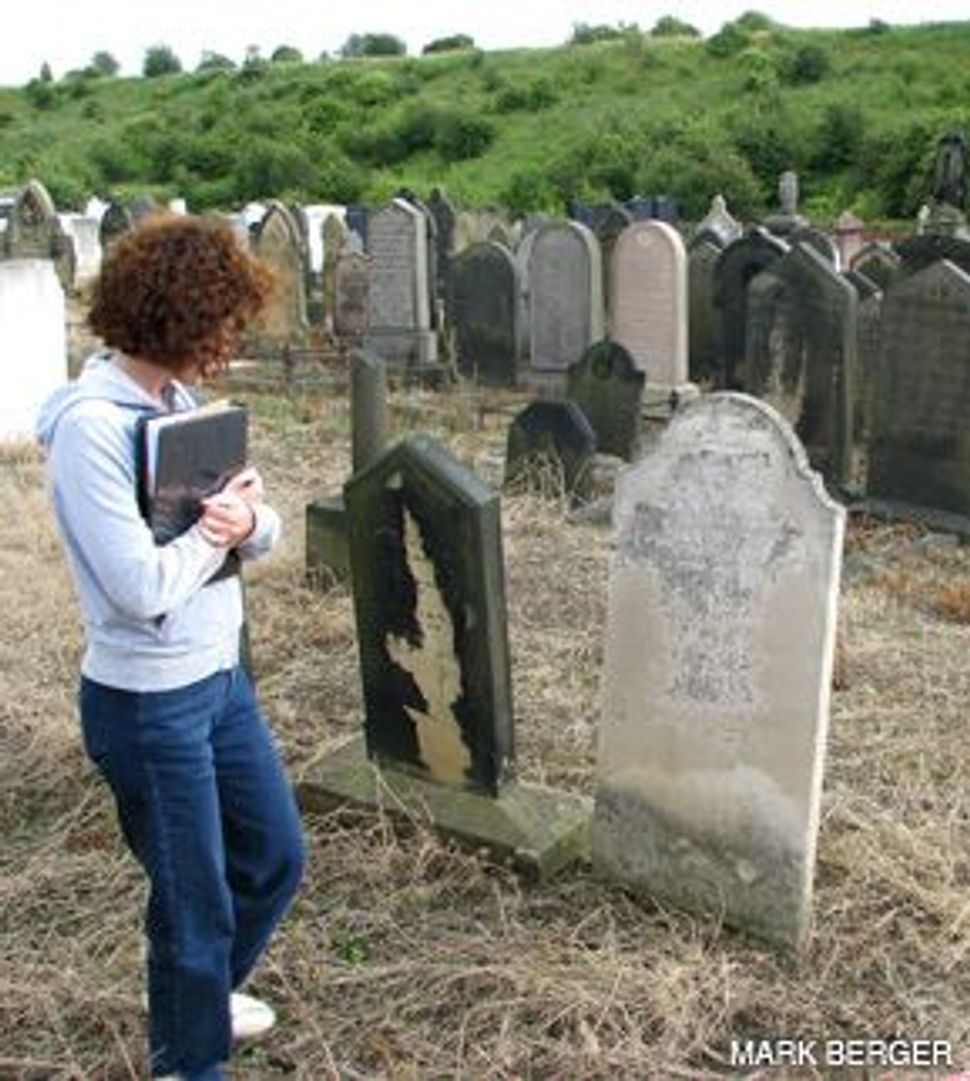 ANCESTRAL TIES: Jane Eisner visits a weathered tombstone in an English graveyard that family legend says belongs to a distant relative. Below, first stop on the visit was to the grave of Rose Levy, her maternal great-grandmother.

We took the A1 South toward Leeds, exited the highway at a junction crammed with cars, trucks, and construction equipment, negotiated one roundabout and then another, dropped down the hill, looked for the red sign and, sure enough, found the cemetery on Gelderd Road. The English sure know how to give good directions. 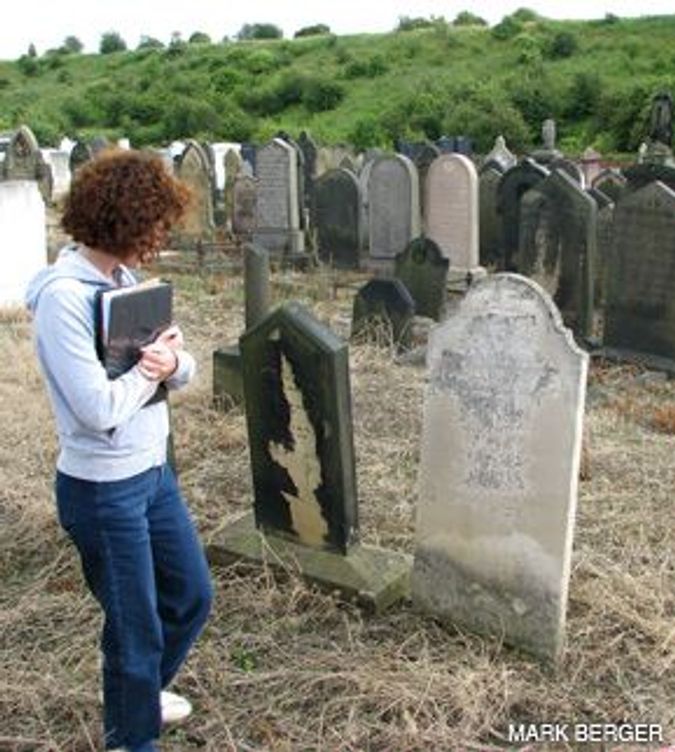 ANCESTRAL TIES: Jane Eisner visits a weathered tombstone in an English graveyard that family legend says belongs to a distant relative. Below, first stop on the visit was to the grave of Rose Levy, her maternal great-grandmother. 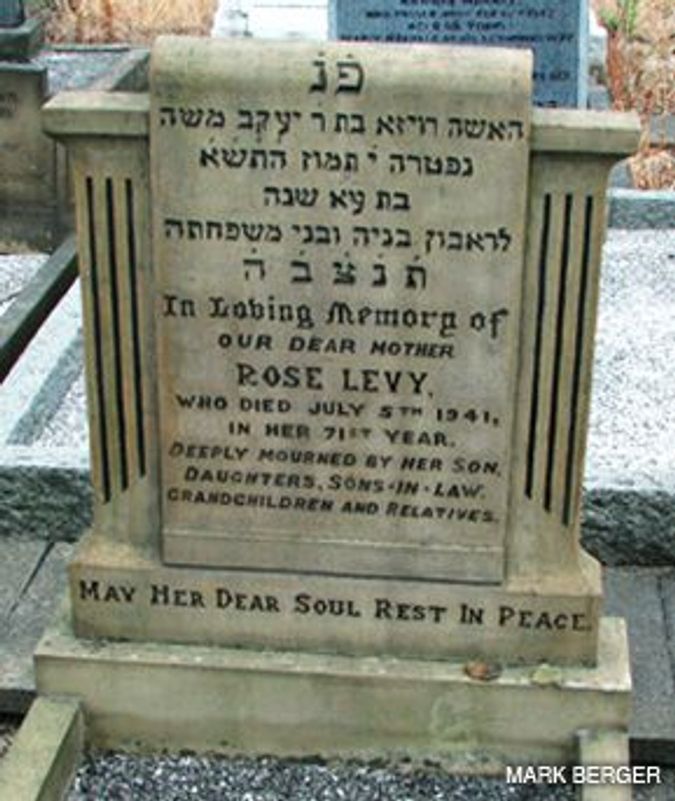 I had come to this cemetery, on the outskirts of my late mother’s hometown, once before, more than 20 years ago. It was when I was living in London as a foreign correspondent and my mother came to visit, without my father — the first time she crossed the Atlantic alone since immigrating to America after the war. With my oldest daughter, who was then 2, we made a pilgrimage of sorts to Leeds, meeting the one family friend who remained in this aging city in central England, and paying homage to the landmarks of my mother’s youth.

Last summer, I returned, this time with my husband and our three daughters. Walking through row upon row of bruised and battered gravestones is not the usual activity you plan for a family vacation. But this United Hebrew Congregations cemetery is the only spot on the planet where I can connect with generations of my ancestors. The girls were receptive; perhaps they knew that, with both my parents now gone, I might never be back in this neighborhood again.

Cemeteries tell stories, if you listen. The stories I heard that blustery day spoke of devotion to family and place, but also to ego, isolation and mystery.

Our first task was to find the grave of Rose Rosenblum Levy, my maternal great-grandmother, who died in 1941. I’m named for her — through my middle name and Hebrew name — and so I feel a responsibility to connect to her life, though I can’t fathom how difficult it was. She was widowed young; her husband died shortly after the last of her six children was born. She supported her family by taking in boarders and becoming the unofficial cook for kosher Leeds. Eventually, she moved in with my mother’s family. My mom adored her. I can imagine why.

All that I knew before visiting the cemetery. What I learned only from being there is that Rose is buried in the same row as her two sisters: Gertrude Glassman, who died, childless, a week after I was born, and Bertha Thompson, tragically killed in 1935 in a kitchen fire as she was cooking dinner a few days before her son’s wedding.

How many of us are laid to rest next to our siblings?

In an older section of the cemetery lay a tarnished stone trimmed by a rusted gate, marking the remains of Rose’s mother, Esther Rosenblum, who died in 1906. And in an even older part, beneath a small square headstone blackened with age, the stone of her mother — Sophia Davis, born in 1805, died in 1883, a century before I became a mother myself.

The mystery lay nearby. Family legend has Sophia Davis’s mother buried in the first grave to the left as you enter the cemetery’s old gate. Sure enough, a grave is there, but the marker was made long ago, of soft, white Portland stone, and the inscription had been stripped away by time and nature. The cemetery records from that period are of no help. The skeptic in me believes there’s little chance that this is the grave of my great-great-great-great grandmother. But there are some stories that are, as we used to say in journalism school, “too good to check out.” This is one I’m holding on to, no matter what.

More stories: We were also told that Rose Levy’s husband suffered from some sort of mental disease. Before our trip, I had learned through research that Jacob Levy died in Wakefield Asylum in 1908, at the age of 40. His grave is a testament to the isolation and sorrow of that suffering. It’s off in a corner, a pointed stone at the head of a long-neglected rectangular marker, now filled with stone and broken concrete. “Gone But Not Forgotten,” it says.

Cemeteries hold more than just grim tales, and so did our visit. My mother had complained on our first trip about a wealthy Jewish family that insisted the body of its patriarch, buried in a Gelderd Road grave, be exhumed and that it be moved to the fancier Jewish cemetery in the swanky part of north Leeds once the new burial ground was opened. Just another one of my mother’s crazy stories? Oh, no. The caretaker told us that the body of Montague Burton, founder of a menswear empire, was indeed moved to the new cemetery. In its place is an ugly, overgrown shrub!

My mother was right to grouse. If the United Hebrew Congregations cemetery is good enough for her ancestors and mine, it should have been good enough for Sir Montague. He could not be keeping better company.

Family Tales and Mystery Amid the Markers