Jokes and Other Things the French Find Funny 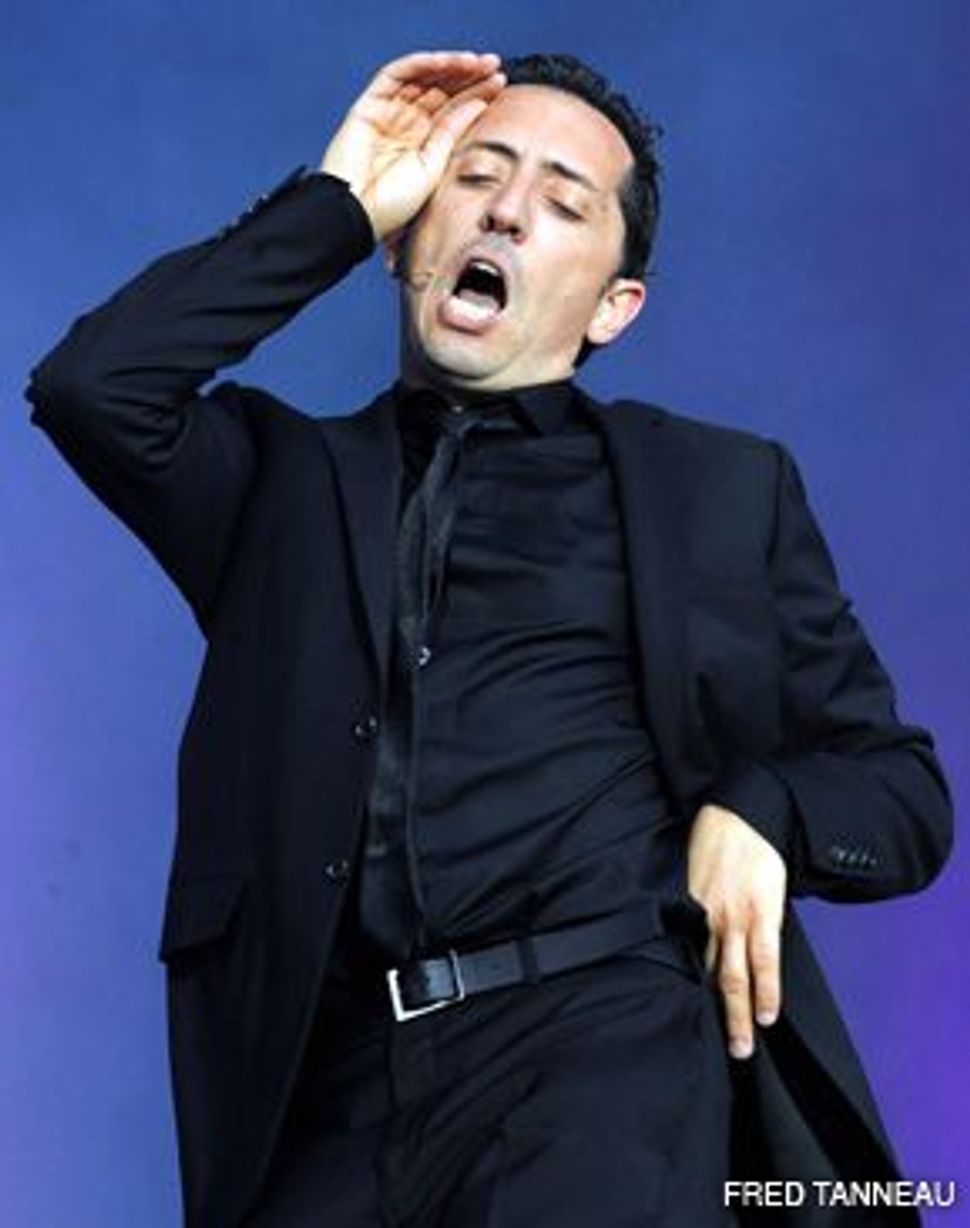 MOROCCAN ON THE MAINLAND: Elmaleh playing for laughs on stage in Brittany.

In France, Christmastime just might not seem the same without a new antisemitic jape, and the performer Dieudonné (born Dieudonné M’bala M’bala, just outside Paris in 1966, of Breton-Cameroonian origin) provided one on schedule during a Paris show. In what noted Nazi-hunter Serge Klarsfeld later described to RTL radio as a deliberate, publicity-seeking “provocation” and “staged event,” Dieudonné invited the 79-year-old pseudo-historian and Holocaust denier Robert Faurisson onstage, whereupon Faurisson was embraced and presented with an award for “social unacceptability and insolence” by a stagehand wearing pajamas and a yellow star. The audience of 5,000 at Le Zénith theater, including the 80-year-old far-right-wing agitator Jean-Marie Le Pen and his cohorts, cheered. 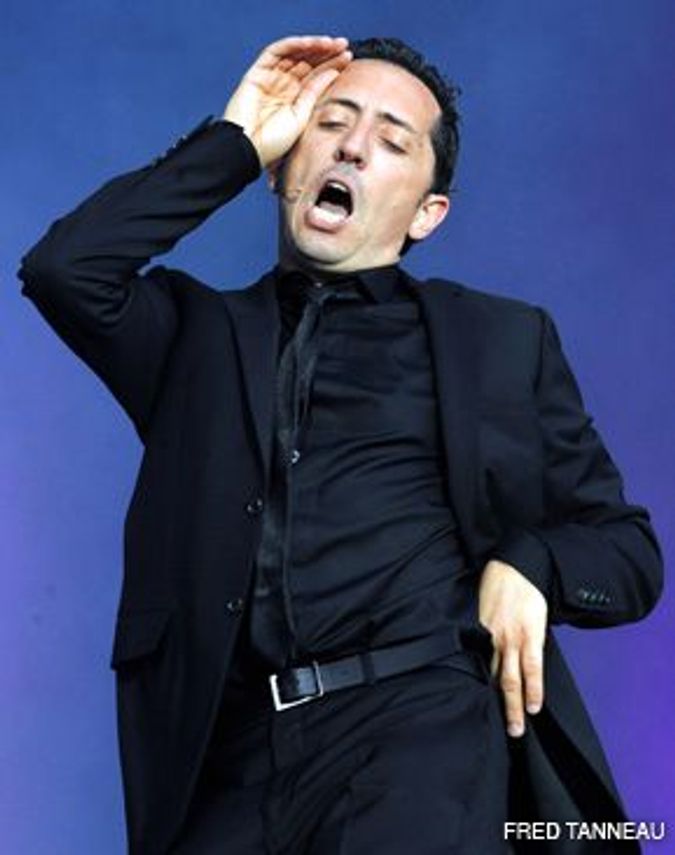 MOROCCAN ON THE MAINLAND: Elmaleh playing for laughs on stage in Brittany.

Although Dieudonné was dignified in 2007 with a pompous, overbearing profile in The New Yorker, his antics are an increasingly feeble and irrelevant echo of French antisemitism, a tradition all too familiar from “Being Jewish in France” (“Comme un Juif en France,” 2007), a three-hour TV documentary that had its American premiere last August at the San Francisco Jewish Film Festival, and will be seen January 25 at the Walter Reade Theater as part of The 2009 New York Jewish Film Festival. “Comme un Juif en France” portrays a country that, despite having the largest Jewish population of any country in Western Europe, has been, and continues to be, little short of catastrophic for Jews. Yet there may be surprising reasons for hope, in the form of French-Jewish comedians who are vastly more popular and influential than Dieudonné.

The Moroccan-Jewish comic actor Gad Elmaleh, born in Casablanca in 1971, has become a beloved screen star in more than 20 films, including the recent DVD releases “Priceless” ([First Look Home Entertainment), “Would I Lie to You 2?” (Synkronized USA), “The Valet” (Sony Pictures Home Entertainment) and “Chouchou” (Warner Home Video). In these, the deadpan Elmaleh — who resembles Buster Keaton, but claims to be more influenced by Chaplin — incarnates a lovable underdog who skewers French foibles such as snobbery (in “The Valet,” he is a parking attendant who pretends to date a supermodel in order to conceal a billionaire’s infidelities), machismo (in “Chouchou,” he portrays a humorously unalluring Moroccan street transvestite) and social savoir-faire (in “Would I Lie to You 2?” he plays a chutzpah-laden garment industry *hondler *(moneyman).

As Elmaleh told The New York Times, his own experience as an immigrant in France has not included antisemitism as much as generalized xenophobia: “I felt different from the Jews who were born [in France], or Arabs… who were born here.” In his film-directing debut, “Coco,” which will be released in France in March, Elmaleh plays the title role of a Sephardic Jew who overdoes plans for his son’s exorbitant bar mitzvah. Elmaleh, who speaks fluent Arabic and Hebrew (mastered at Casablanca’s Ozar Hatorah school), as well as French, appeals to a wide public that understands how in France, Jews and Muslims alike from North Africa share common experiences as outsiders in a white European culture.

Elmaleh frequently collaborates onstage with his friend Jamel Debbouze, a Paris-born Muslim actor of Moroccan descent. During a 2006 benefit performance for the Meir Panim Israeli relief centers, Elmaleh leavened his standup jokes about his family with references to Rashi and Rabbi Elazar ben Azariah, interjecting, “This isn’t the Gemara!” and, “I want another morai verabotai [introduction].” Elmaleh’s charity show coincidentally took place at the same Zénith theater not long ago occupied by Dieudonné, a former colleague who, Elmaleh recently told Canadian Jewish News, is “suffering from a highly serious ailment, paranoia against the Jews, reaching psychiatric levels.”

Over the past 30 years, France’s entertainment world has welcomed some lowbrow knockabout North African Jewish comedians, including Michel Boujenah, Élie Semoun and the late Élie Kakou, yet Elmaleh represents a distinct advance in intellectual flair and wit. Another example, along with Elmaleh, of North African Jewish comedy reaching a vast and enthused audience in France is the new sensation Max Boublil, who was born in Paris in 1979, of North African Jewish heritage. Boublil’s 2007 music video “Ce Soir… Tu Vas Prendre” (“Tonight You’re Going To Get It”), which has received almost 2 million hits on YouTube, exquisitely skewers North African machismo. As a young suitor informing his beloved that he will make love to her “as if I just got out of prison,” Boublil deflates pretentions and poses, just as his joyous stage routines about trying to pick up girls in cafés reach heights of ridiculous glee.

Boublil recently told the French Web site femina.fr that “people in the street, as well as my uncle’s Shabbat table” inspire his jokes. He added that his performances aim at “Sephardic humor,” a Moroccan/Tunisian sensibility that appeals to a wide audience including Jews and Arabs. Insofar as comedy reflects a society’s sensibilities, France’s future being in the hands of such sophisticated talents as Elmaleh and Boublil is encouraging, indeed. Freud’s “Jokes and Their Relation to the Unconscious” (1905) explains that jests highlight a narcissistic facet of the psyche, involving the comparison of one’s self with others. France, surely among the most narcissistic nations on the planet, is lucky to have such humorists currently comparing themselves with it.

Jokes and Other Things the French Find Funny