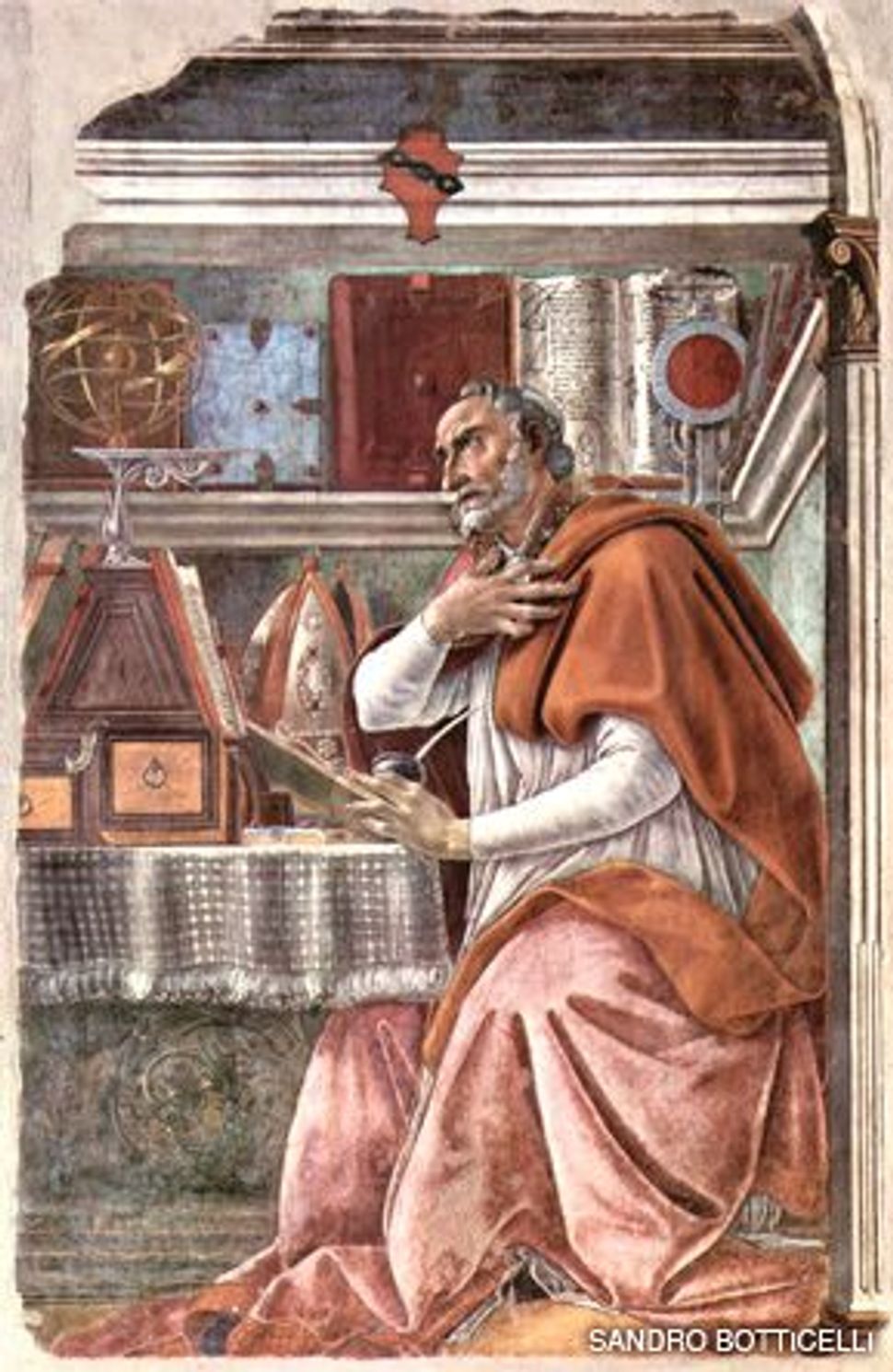 WORRYING ABOUT WITNESS: St. Augustine was probably not worrying about the Jews here, but his words may have helped Jews significantly over the course of history.

Augustine and the Jews: A Christian Defense of Jews and Judaism 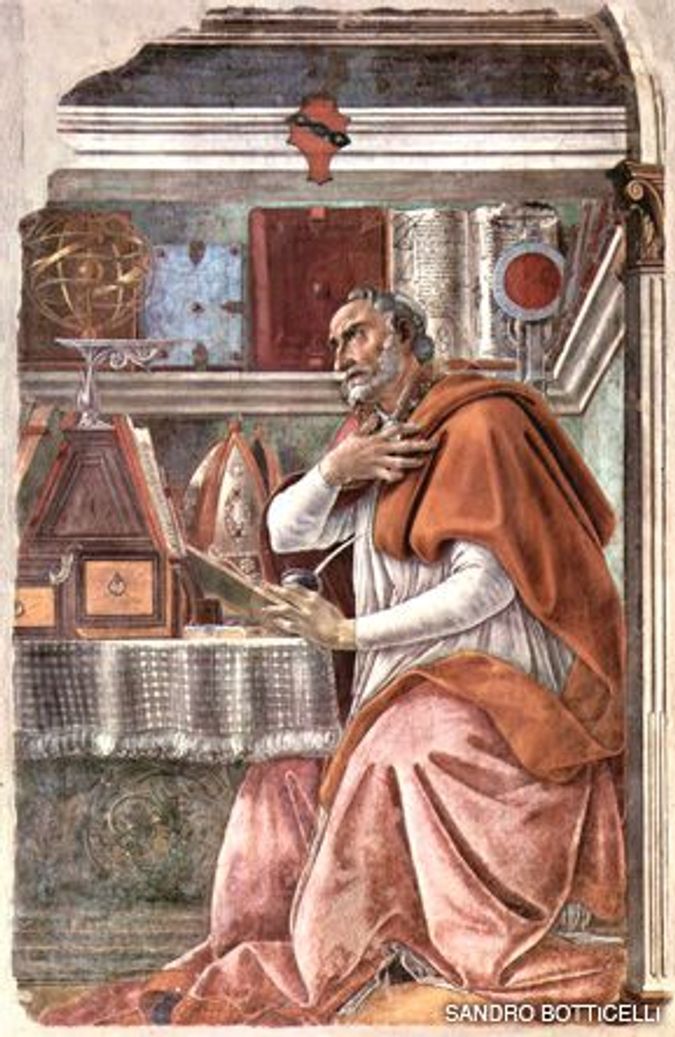 WORRYING ABOUT WITNESS: St. Augustine was probably not worrying about the Jews here, but his words may have helped Jews significantly over the course of history.

The place of the Church Fathers in the contouring of Christianity, particularly with respect to demonizing the Jews, is well established, and their writings have been well rehearsed by theologians, scholars and religious leaders. Anti-Judaism was central to the shaping of Christian theology in the early centuries of Christianity.

As conventional wisdom has it, in terms of virulence of anti-Jewish rhetoric, the Church Fathers were “broad-brush” antisemites — each one worse than the last. But the best known of the Church Fathers, the fourth-century Augustine, parted company with this central tenet of orthodox Christianity, anti-Judaism, as Paula Fredriksen argues in her elegantly drawn book, “Augustine and the Jews: A Christian Defense of Jews and Judaism.”

Fredriksen, a professor of Scripture at Boston University, has established herself as one of the premier commentators on the intellectual and religious history of the early Christian world: Two other books by Fredriksen, “From Jesus to Christ” (Yale University Press, 1990) and “Jesus of Nazareth, King of the Jews” (Vintage, 2000), have expanded our understanding of the early periods of Christianity. “Augustine and the Jews” falls neatly into the context of the scholarly literature on the relations between Jews and non-Jews in ancient and early medieval times. Works such as Louis H. Feldman’s magisterial “Jew and Gentile in the Ancient World,” which sets a comprehensive context for Fredriksen’s explorations; Benjamin Isaac’s substantial “The Invention of Racism in Classical Antiquity,” on anti-Judaism in Greece and Rome; and Peter Schäfer’s masterful “Judeophobia: Attitudes Toward the Jews in the Ancient World,” which establishes post-Alexandrian Ptolemaic Egypt as a generating source of anti-Judaism, all lead naturally into Fredriksen’s analysis.

Central to the agenda of “Augustine and the Jews” is the development of the early Christian idea of “Jewish witness” — the notion, crucial to the shaping of Christian theology, that the Jews, by their very (and very unlikely) survival, were “witness” to the truth of Christianity. In Augustine’s words, “It is in order to give this testimony [to the truth of Christianity] that they are themselves dispersed among all nations, wherever the Christian Church spreads.” Why else, the Church Fathers asked, would the Jews, in their weakened condition, without homeland or power, have been permitted to survive?

Augustine took “witness doctrine” to a new level, Fredriksen argues: His theology of the Jews’ special status and the special service that their presence rendered the church provided authority for later churchmen to deflect and even defuse Christian violence toward Jews. Augustine provided, in effect, a counterweight to the 300-year development of anti-Judaism — the contra Iudaeos, “against the Jews,” tradition — that by the time Augustine arrived on the scene (he was born in 354) had become a defining feature of Christianity. Augustine turned the tables on the “Christ-Killer” polemic of other early Christian writers, and averred that Jews should be exempt from Christian persecution. At the very least, for the salient point of Jews “witnessing,” Christians needed to have living people who were practicing Jews! Augustine, Fredriksen argues, was a protector of Jews.

Much of Fredriksen’s analysis of Augustine’s break with tradition derives from one of the theologian’s lesser-known works, “Contra Faustum Manichaeum,” “Against Faustus,” a polemic against the leader of the Manichean heretics (Jesus seemed to have only flesh, according to this heresy), in which Augustine delivers himself of his views on Jews and Judaism. Faustus’s attack on Orthodox Christianity was, in large measure, based on anti-Jewish themes: Basically, Christian revelation had nothing to do with Jews or Jewish Law, both of which ought to be discarded. Not so, Augustine argued. Even though his own church had adopted much of the anti-Jewish rhetoric that Faustus spouted in the name of the Manicheans, Augustine asserted that that the two “Testaments” had validity. If this be the case, then Jewish practice — indeed, the very existence of the Jews — had validity, even if this was based on the role of Jews to be “witness” to the truth of Christianity.

The question, of course, for Fredriksen — and for us — is basic: Does her thesis hold water? Or, more precisely, does she give good value to Augustine’s writings, other than “Against Faustus”? For example, Augustine’s master-work, “The City of God,” has much to say about “Jewish witness,” not all of which is positive. And there is Augustine’s sermon “Against the Jews,” which while not quite as harsh in tone as much of the anti-Jewish Christian rhetoric of the period, is certainly in line with it in content. It is almost as if Augustine — for whom Christian heresies and heretics, not Jews, topped the agenda — had to say something about the Jews, and what he said may not have been entirely consistent.

The question for us is not whether Augustine was a nice guy; it is all about the weighty matter of the shaping of the theology of the then-new faith community. And here Fredriksen walks, and sometimes trips over, a fine theological line. She cannot help but place Augustine in the tradition of Christian theologies of deicide, of “Teachings of Contempt,” of a supersessionist religion that is the fulfillment of the old. Augustine, after all, was a Father of the Church, and was foursquare committed to a church theology that he helped shape. At the same time, Fredriksen’s nuanced analysis of “witness doctrine” squares the circle nicely; the writer makes a compelling case for the value of this important piece of Augustine’s theology as a “Christian defense” of Jews.

Historians will continue to argue over the question of whether the doctrine of “witness” was, in the long run, “good for the Jews.” Did “Jewish witness” protect Jews over many centuries, as it is persuasively argued by Fredriksen that it clearly did in the Second Crusade? Was there a lasting beneficial effect of “witness”? Or was the doctrine in fact pernicious, making Jews more, rather than less, vulnerable to slights, to prejudices, to persecutions, and ultimately to murders? Indeed, I would argue that modern antisemitism, racial rather than religious in nature, can be traced in part to Christian notions of “witness,” which a priori set apart Jews as the miserable “Other.”

And this is the context in which Augustine and the Jews ought to be viewed. Why, indeed, do we, in 2009, care about what Augustine in 399 thought about Jews? “Witness doctrine” has had an impact over many centuries. Has it been benign, indeed beneficial, to Jews? Has it been lethal? Wherever one falls out on these questions, “Augustine and the Jews” is a valuable — and refreshing — contribution to the debate.

Jerome A Chanes, a Forward contributing editor, is the author of the award-winning “A Dark Side of History: Antisemitism Through the Ages”(Anti-Defamation League of B’nai B’rith, 2001) and the editor of “A Portrait of the American Jewish Community”(Praeger Publishers) and the editor of the forthcoming volumes “Whither American Zionism?” and “The Future of American Judaism.”