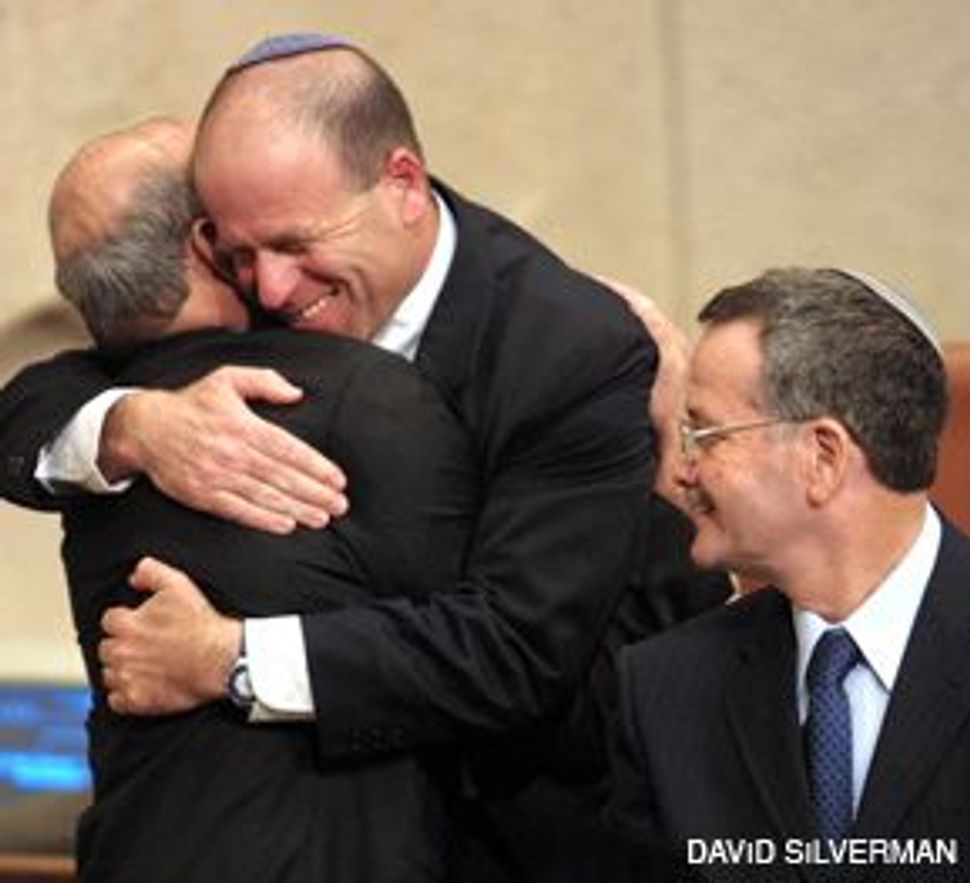 IN THE SHADOW OF SHARON: Avrum Burg, when he was Speaker of the Knesset during the Sharon era, hugs Salah Tarif, the first non-Jewish government minister. To their right, the Knesset secretary Aryeh Han, enjoys the moment.

The Holocaust Is Over; We Must Rise From Its Ashes 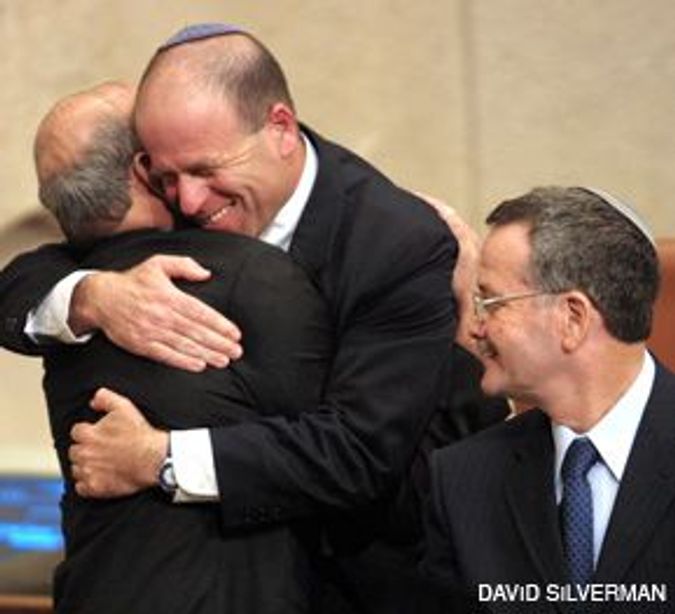 IN THE SHADOW OF SHARON: Avrum Burg, when he was Speaker of the Knesset during the Sharon era, hugs Salah Tarif, the first non-Jewish government minister. To their right, the Knesset secretary Aryeh Han, enjoys the moment.

Avraham Burg’s new book, “The Holocaust Is Over; We Must Rise From Its Ashes,” is maddening: It is by turns incisive and hard-hitting, but also bombastic, vague and repetitious. It is also extremely important.

Burg’s basic argument is simple: For too long, Israel has had an unhealthy obsession with the Shoah, leading the country to use the Shoah as a justification for mistrusting the rest of the world and for continuing to dispossess the Palestinians.

What makes the book significant is its author’s Zionist credentials. An heir to the glory and horror of Western and Eastern Europe (his father was the German-born National Religious Party leader Yosef Burg, son of Yiddish-speaking Polish Jews murdered in the Holocaust) and the Middle East (his mother, Rivka, was a survivor of the 1929 Hebron massacre), Burg was an officer in an elite paratroop unit, a Labor leader who became speaker of the Knesset and at one time was thought to be prime minister material. In a word, until recently, he embodied the Israeli political establishment that this book so harshly criticizes.

Burg’s critique is sharp, and it is off the charts on my personal discomfort test: How upset and defensive would I get if a non-Jew made these kinds of arguments about Israel? Coming from someone who was once part of the Israeli establishment, the critique is doubly stinging and, given the firestorm that the original Hebrew version caused in Israel, likely to contribute to needed soul-searching.

The bulk of the book is a denunciation of the Shoah’s hold on the Israeli imagination. Burg likens its pervasiveness in the culture and politics of Israel to “the hole in the ozone layer: unseen yet present, abstract yet powerful.” Well, not exactly unseen, as he shows how the Shoah is invoked constantly in political discourse, public commemorations, youth pilgrimages to Auschwitz and the like. At the same time, Burg argues that Israelis have understood the Shoah as an event significant only for the Jews, and through this distorted lens, the Israelis have drawn the conclusion that the world was, is and always will be against Israel and the Jews. Logically, then, force is the proper basis of Israeli foreign policy, and dissenters from this Shoah-inspired worldview are considered enemies of the Jewish people.

Burg argues passionately and, for the most part, persuasively that the main lesson of the Shoah should be universal and both forward- and backward-looking: Israel must stand with other nations against racism, xenophobia and oppression wherever they occur, precisely to prevent genocide. Insisting on the Shoah’s uniqueness cuts off Israel from other nations’ struggles to act on the Shoah’s universalist implications. Coming hard after a chilling passage that sees Germany’s brutal early 20th-century colonization of Namibia as the precursor of Nazi racial theory and extermination practices, Burg proclaims that the Shoah “was not only a Jewish historical event, or the climax of longstanding hatred of Jews…. The Jewish Holocaust was the climax of expanding human evil.”

Perhaps the book’s most interesting and detailed chapter is an unflattering comparison between Weimar Germany and contemporary Israel. Burg sees painful parallels between the military in Weimar and Israel, including importance as an avenue for political power and the exclusion of ethnic minorities (German Jews and Israeli Arabs) from its upper echelons. As in Weimar, political language in Israel has become debased, with violent rhetoric and an us vs. them mentality paving the way for dehumanizing perceived enemies both external and internal. Euphemisms became accepted smokescreens for harsh realities, a process that Burg notes in Israeli society dating back at least to his Israel Defense Forces days in the early 1970s, and continuing today in the use of such phrases as “targeted prevention” for what Burg labels “assassinations.”

Burg attributes a great part of the Nazis’ rise during Weimar to the majority’s indifference, which enabled widespread acceptance of extreme right-wing ideology. He sees a disturbing similarity in Israelis’ indifference to extremism, which allows it to creep into the political mainstream. Throughout these passages, Burg is careful to point out that he is not comparing Israel with Nazi Germany. He is, however, unsparing in seeing the roots of that evil in the traits that Weimar shared with today’s Israel.

Burg is much less compelling when discussing how to move forward. He offers platitudes on Israel’s need to stand with other nations in opposing injustice, but little practical advice regarding how to arrive at peace with the Palestinians or heal divisions within Israeli society. He believes that Israel should be a state of all its citizens, yet he does not explore at any length the implications of this proposal, let alone how it might be accomplished. He advocates amending the Law of Return to recognize as Jews those who choose to share the Jewish people’s fate rather than to require Jewish birth or the acceptance of Orthodox religious practice. But Burg leaves the far-reaching ramifications of this change undeveloped.

More sure-footed, however, is his suggestion of how to rework Israel’s Shoah Remembrance Day. In the Jewish state’s early days, its leaders chose to commemorate the Shoah on the day of the Warsaw Ghetto uprising, symbolically honoring resistance rather than victimhood. Burg advocates commemorating it three times during the year. By observing it January 27, the international day of Holocaust remembrance, Israelis would never lose sight of the fact that the Shoah was a crime against humanity, not just against the Jews, and that preventing further genocide is the business of the entire world. Commemorating it May 9, the day on which the former Soviet republics — and Israel’s immigrants from those countries — mark the victory over Nazi Germany, would symbolically embrace the many immigrants from the former Soviet Union who are not Jewish under Jewish law. Finally, celebrating it on the Ninth of Av would express the Jewish particularity of the genocide, while incorporating the Shoah into that day’s remembrance of the destruction of the Temples would place it within the historical continuum of Jewish suffering rather than consider it wholly unprecedented.

Burg tries to ground his prescriptions for a new Israeli attitude toward the world in a “new Judaism,” but his foray into theology is shallow. He argues for a Judaism that is more concerned with the needs of all peoples rather than with those of Jews alone. He argues for a version of God who does not intervene in the world, and thereby Burg solves the problem of theodicy: the Shoah is a human, not a divine failing. This raises questions that Burg barely addresses (for example, the nature and status of revelation and religious authority). Burg is also vague on the content of such Judaism, other than to state that it need not be ruled by Jewish law. Dismissing Jewish law is no small matter, and Burg leaves unexamined a host of issues that, as American Judaism has painfully found, must be confronted.

Moreover, it is unclear how Burg proposes to foster any of these religious — or, as he often prefers, spiritual — changes. This omission is striking, coming from someone so familiar with the workings of government power. Some reflection on the concrete project of wresting control over matters of civil status from the Orthodox religious establishment would have been helpful.

This book is unevenly written: While occasionally rising to prophetic heights, its prose is often leaden, and it is marred by infelicitous translations. Referring to the Shoah’s universalistic message, the following phrase combines these two flaws: “One law will be in the land for the persecuted of the entire world, whatever group….” But these imperfections are overshadowed by the passion and logic of Burg’s critique. The response to it in this country is likely to be as heated as it was in Israel. The nerve it touches is raw and very close to the surface.