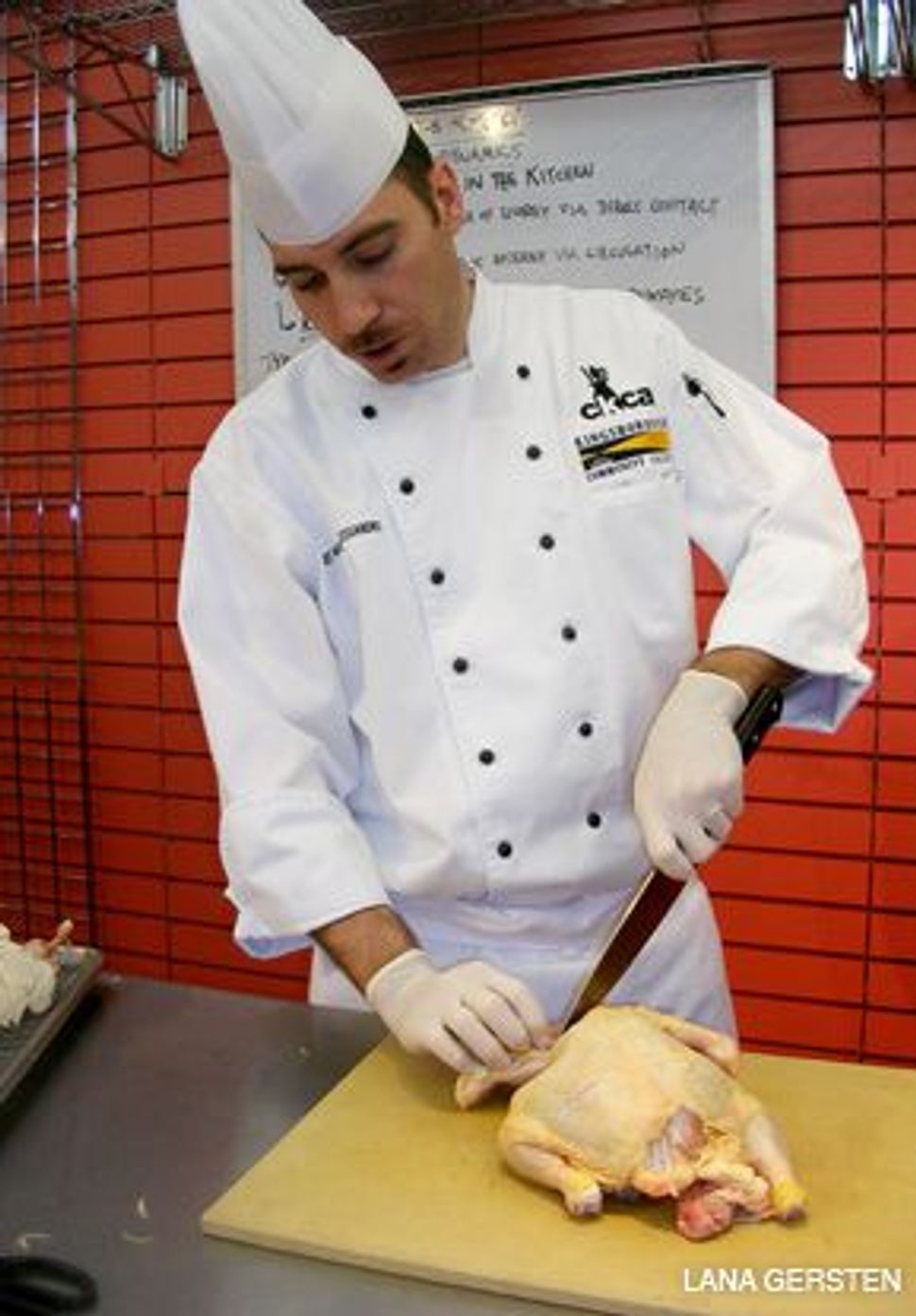 SOMEONE'S IN THE KITCHEN: Chef Mark D?Allessandro demonstrated how to prepare a raw chicken.

Tucked amid the shops on a busy street in Brooklyn, the Center for Kosher Culinary Arts is at first hard to find. The one-room school, located on the second floor of a housewares store, is small and unimposing. Despite its humble appearance, the center offers an impressive array of recreational classes for the home cook, from a master class in chocolate, taught by chocolatier Bruce Beck, to preparation of healthful weeknight meals, taught by cookbook author Rachel Saks. 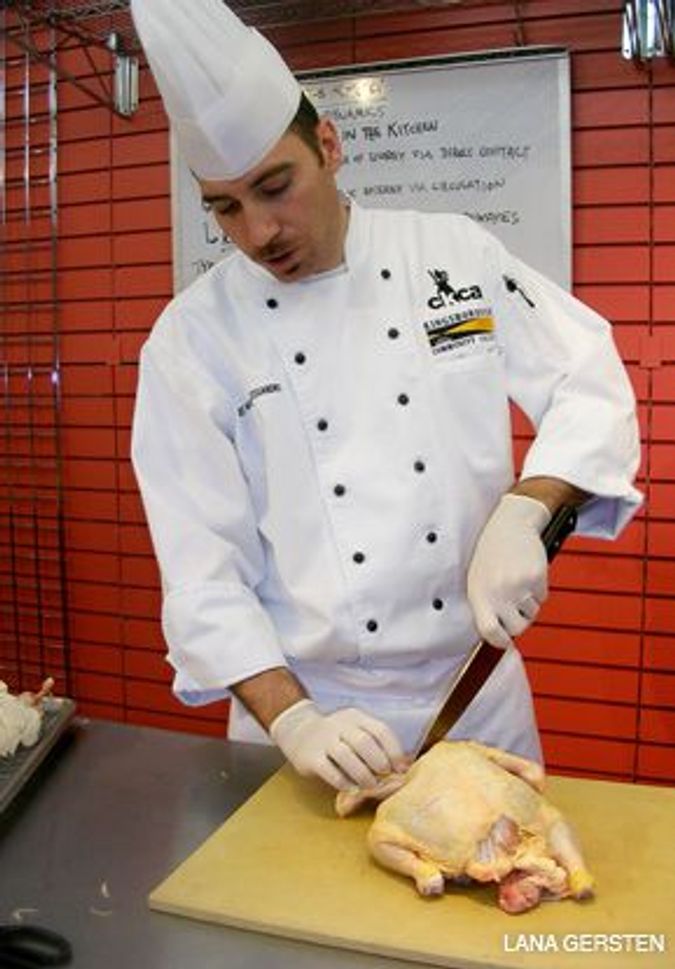 SOMEONE'S IN THE KITCHEN: Chef Mark D?Allessandro demonstrated how to prepare a raw chicken.

When the school opened in the fall of 2007, it was the first culinary institute of its kind in the United States, catering to a Jewish clientele in the heavily Jewish Brooklyn neighborhood of Flatbush. In addition to its recreational classes, the school started a professional training program last summer, where participants walk out of the six-week, $4,500 course with a joint certificate in culinary arts from Center for Kosher Culinary Arts and Kingsborough Community College. The school now offers the professional program during the day and at night, and added a new crop of seasonal recreational classes this month.

When I called to inquire about taking a recreational class, Jesse Blonder, director of the school, recommended the cooking-technique course, part of a five-session culinary boot camp that teaches everything from dry-heat and wet-heat techniques to knife skills and bread making. As a recreational-cook-in-training, I signed up for the dry-heat class, which taught the fundamentals of roasting, baking and sautéing. One week later, in a class with 10 other students, I found myself with my very own raw whole chicken.

With an ease that I could admire only from afar, chef Mark D’Allessandro, who had previously taught in Florida at Le Cordon Bleu College of Culinary Arts Miami — associated with the famed Paris culinary school — showed us how to tie the chicken’s legs closer to the body in order to allow it to roast perfectly, and then demonstrated how to carve the raw bird into airline chicken breasts, bone-in leg quarters, and lollypop chicken wings, all while finishing with a clean carcass. His demonstration took about 10 minutes; I spent an hour and a half struggling to carve my bird into eight pieces. In the end, my bone-in leg quarters were entirely mangled and I completely abandoned the flat wings for fear of failure. I couldn’t help but daydream about the poultry section of the supermarket, where I could easily buy chicken already cut into perfect pieces.

But as Blonder put it when I first called: “Most of our classes are technique driven as opposed to recipe driven. We teach them how to sauté, so they can sauté anything.”

Once the breasts, legs and wings were removed, we proceeded to roasting, which made the difficulties all worthwhile. D’Allessandro’s simple, no-nonsense cooking style was perfect for beginners. He demonstrated how to make a stock using carrots, celery, shallots, fresh thyme, red wine and chicken bones, and then the class split into pairs to cut vegetables for stock. Since I was the 11th person in a class of 10, I lucked out and was paired with the chef, a perk that guaranteed me a great meal at the end of the evening — and an impromptu lesson in knife skills. After the slicing was complete and the stock was bubbling away on the stove, we drizzled olive oil and sprinkled salt and pepper on the chicken breasts and began sautéing.

Each pair of students was given the task of making a meal. My two chicken breasts crackled as I placed them on a hot pan coated with olive oil, helping them form a crispy skin before they were transferred to the oven to finish cooking. Once the breasts were done, I brought them back to the stove and added shallots, mushrooms and the cooked stock. By that point, it was 10 p.m. and I was starving, but my patience paid off: The stock had transformed into a rich sauce, and the chicken was perfectly cooked. The dish superbly complemented the grilled zucchini and roasted cauliflower.

I learned a lot from my evening at culinary boot camp, but the best part was the eating. As an added bonus, D’Allessandro gave me a quick rundown of his favorite cookware and offered up an easy way to cook fish using parchment paper. As of now, the Center for Kosher Culinary Arts has no direct competition from other kosher culinary schools, and though it’s still in its early stages, one can imagine that the center is well on its way to becoming a premier school for kosher cooking.