The Next Generation: Organizers and Activists Learn the Ropes 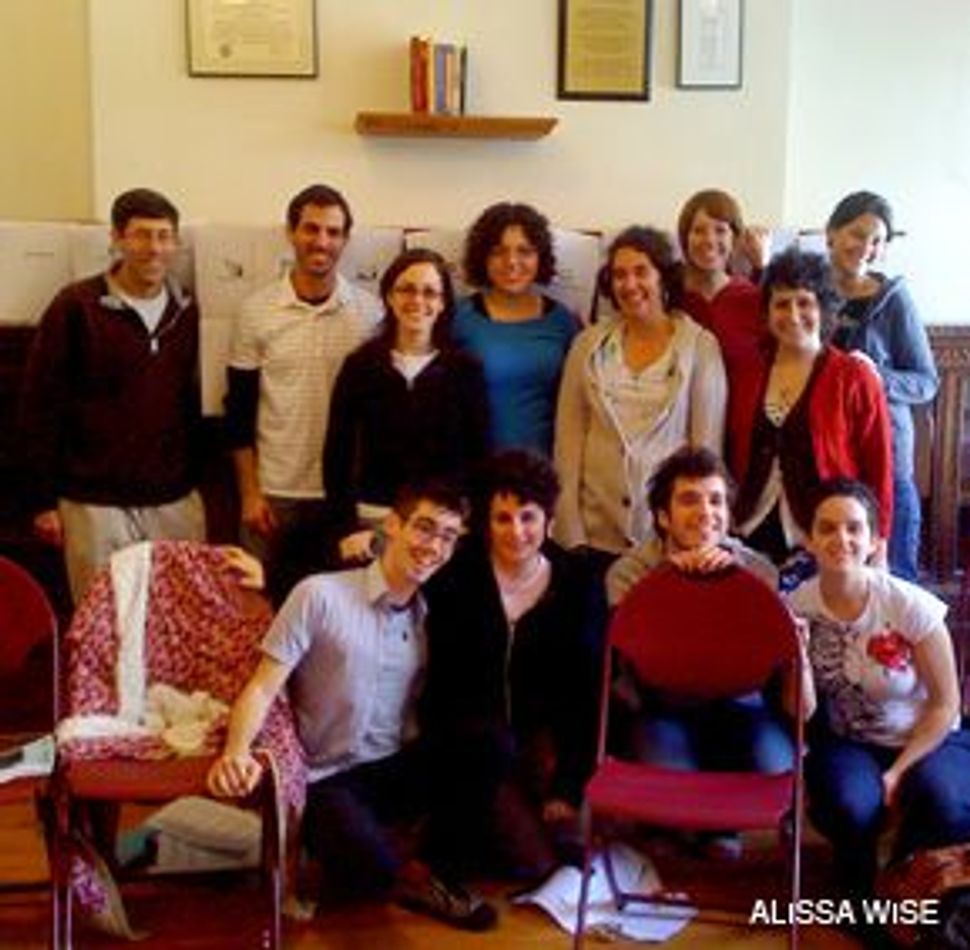 WORKING TOGETHER: The inaugural class of the Grace Paley Organizing Fellowship, launched this year by Jews for Racial and Economic Justice.

By 10 o’clock on a Saturday morning, a dozen bleary-eyed idealists were already milling around, chewing absently on bagels and sipping from little orange juice cartons. Sunlight streamed into the windows of the fifth floor of the brownstone on East 10th Street in New York City, where they had gathered to talk about leadership development and oppression. Later that day, they would use such words as “invisible-ize” and discuss systems of power and the best approach to knocking on doors on the Lower East Side. But they began the morning with an invocation of sorts, a reading from Grace Paley’s short story “Midrash on Happiness.” 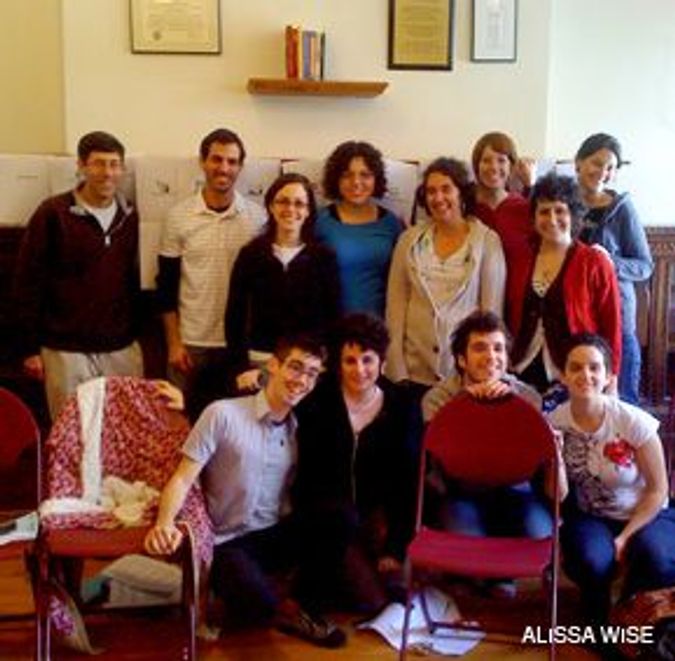 WORKING TOGETHER: The inaugural class of the Grace Paley Organizing Fellowship, launched this year by Jews for Racial and Economic Justice.

“For happiness, she… required work to do in this world,” read 29-year-old Alissa Wise, who serves as the education director of Jews for Racial and Economic Justice, a Manhattan-based group that provides organization, education and advocacy. JFREJ had convened the Saturday meeting. “By work… she included the important work of raising children righteously up,” Wise continued. “By righteously she meant that along with being useful and speaking truth to the community, they must do no harm.” The 14 community organizers, seated in a circle, went around and read until the story ended. Then there was silence. Wise spoke first. “I love Grace Paley,” she said.

This was the fourth meeting of the inaugural class of the Grace Paley Organizing Fellowship, which JFREJ launched this year to train a new generation of organizers and activists. The fellows are mostly in their 20s, but they range in age from 19 to 45. Their religious observance runs the gamut from secular to Modern Orthodox. About half of them were already involved in JFREJ when the fellowships were announced, and they applied so that they could take their involvement to the next level; the other half used the fellowships as their way of becoming involved in JFREJ.

Rob Browne, a dentist who lives on Long Island with his wife and three children, had given money to JFREJ in the past, but otherwise had not been involved. Then one day, he heard some of his neighbors mention that they were looking to hire someone to clean their houses. “I said, gee, well, that’s a dynamic,” Browne said. “There seemed to be no rules. How much is paid, what the standards are in terms of hiring and firing people. It was all done differently from person to person. I thought, I know that’s what’s done, but there’s got to be something more organized.” Browne’s research into what Jewish law has to say about domestic workers led him to JFREJ and, shortly thereafter, to the fellowship.

Founded in 1990, JFREJ organizes its members to act on behalf of progressive causes in New York, such as labor and immigrants’ rights. In 1994, for example, JFREJ worked in support of the Chinese Staff and Workers’ Association in the association’s efforts to unionize a restaurant in Chinatown. For the past several years, two of JFREJ’s major campaigns have been Shalom Bayit, which aims to pass statewide Domestic Workers Bill of Rights legislation, and a Housing Justice campaign for affordable housing.

The six-month fellowship began in September 2008 and runs through February. In addition to attending these monthly training sessions and retreats, fellows commit to spending 16 hours per month working on one of the two campaigns, and to raising $500 toward JFREJ’s work. In addition, each fellow is assigned a seasoned organizing mentor from progressive groups around New York City, such as the Bronx Defenders and the not-for profit Jewish Funds for Justice. JFREJ received a grant from the Elias Foundation to help administer the fellowship, but participation is on a volunteer basis; no one is paid, including the fellows and the experts who lead workshops or conduct training at the fellows’ retreats.

JFREJ’s approach to training leaders is not simply to teach them concrete organizing skills, such as how best to knock on doors, make phone calls or organize a rally. The fellows certainly do learn these types of skills, both at these retreats and on the ground, in their work on the campaigns. At the recent Saturday meeting, for example, Yasmeen Perez, leadership development director of the group FIERCE, which is by and for gay and lesbian youth of color in New York City, taught a workshop on leadership development. But building of concrete skills is paired with theoretical and cultural analysis so that the fellows will have a context within which to understand the work they’re doing. On this particular afternoon, JFREJ’s executive director, Dara Silverman, and community organizer Danielle Ferris taught a workshop on anti-Jewish oppression. Some other topics have been imperialism and white supremacy, Jews and class, and gender and sexuality.

“The more knowledge I have as an organizer about how these systems work, the more power I have to affect positive change,” said Zach Scholl, 21, who has been involved with JFREJ for a year and a half, first as an intern and now as a fellow. “I really need to understand the ways that these systems of oppression affect us and divide us.”

After the Grace Paley reading, the fellows spent some time studying musar, or Jewish ethical practice. Wise is a fifth-year rabbinical student at the Reconstructionist Rabbinical College, and has, over the course of the fellowship, led discussions and study on taking responsibility for the “other.” The group reflected together on a passage from Exodus in which Moses’ father-in-law, Jethro, asks Moses to allow others to help him: “Why do you act alone, while all the people stand about you from morning until evening? The task is too heavy for you…. You cannot do it alone.” The group then broke into pairs to discuss what it means to be a good leader — when to ask for help, and when to take on tasks themselves. Most of the fellows are students; many work full time. Balance is a big issue.

After musar study, the fellows discussed the readings assigned to them that day, which included “Between a Rock and a Hard Place: Relationships Between Black and Jewish Women,” written by feminist icon Barbara Smith, and “The Past Didn’t Go Anywhere: Making Resistance to Anti-Semitism Part of All of Our Movements,” a self-published pamphlet by Philadelphia activist April Rosenblum.

The fellows are mindful of the fact that they are rarely affected directly by the issues for which they are fighting. The question of what it means to work on behalf of, and in solidarity with, others is one that occupied much of the day’s discussion.

Vered Meir, 26, has been involved with the Shalom Bayit campaign for three years. She chose to apply for the fellowship even though she moved to Boston last fall. She has been commuting to New York once a month for training, and doing as much work as she can on the campaign remotely. “What’s hard about organizing as allies is that we have a choice to be involved or not, whereas somebody who’s being abused by their landlord, let’s say, doesn’t really have a choice,” she said. “I want to feel like my liberation is tied up in the liberation of [Domestic Workers United] members. I don’t want to feel like, yeah, I moved, so I’m not going to be involved anymore.”

Grace Paley, writer, activist and longtime JFREJ member, died in 2007. Wise says that the organization was looking for a way to honor her, so when the idea for the fellowships first emerged, it seemed like the perfect fit. Paley’s daughter, Nora, agreed. “This JFREJ fellowship is the right ship on the right sea to continue in her name,” she told the Forward. “How wonderful that these shining young people are on earth and willing to continue the human race in adamant decency. My mother would have been honored to meet each of them and work beside them, too.”

After Perez’s workshop, the fellows broke for lunch. They told stories, laughed, teased each other and chatted about their plans for the holidays. Before they reconvened to talk about oppression and what it means to be “out” as a Jew, they stood in a circle in the sunlight for a post-lunch warm-up. Lane Levine, community organizer for the Shalom Bayit campaign, had devised an “organizer stretch” — kind of like the hokey-pokey, but more grown-up. Sort of. “Stretch up for high goals!” he said, and all the fellows reached their arms to the ceiling. “Reach down to your grass roots!” They followed Levine’s lead, touching their toes, leaning left and right, touching their heads and wrapping their arms around themselves. As they finished, the room filled with flailing arms and legs: “Shake it out for social change!” Levine said, and they did.

The Next Generation: Organizers and Activists Learn the Ropes