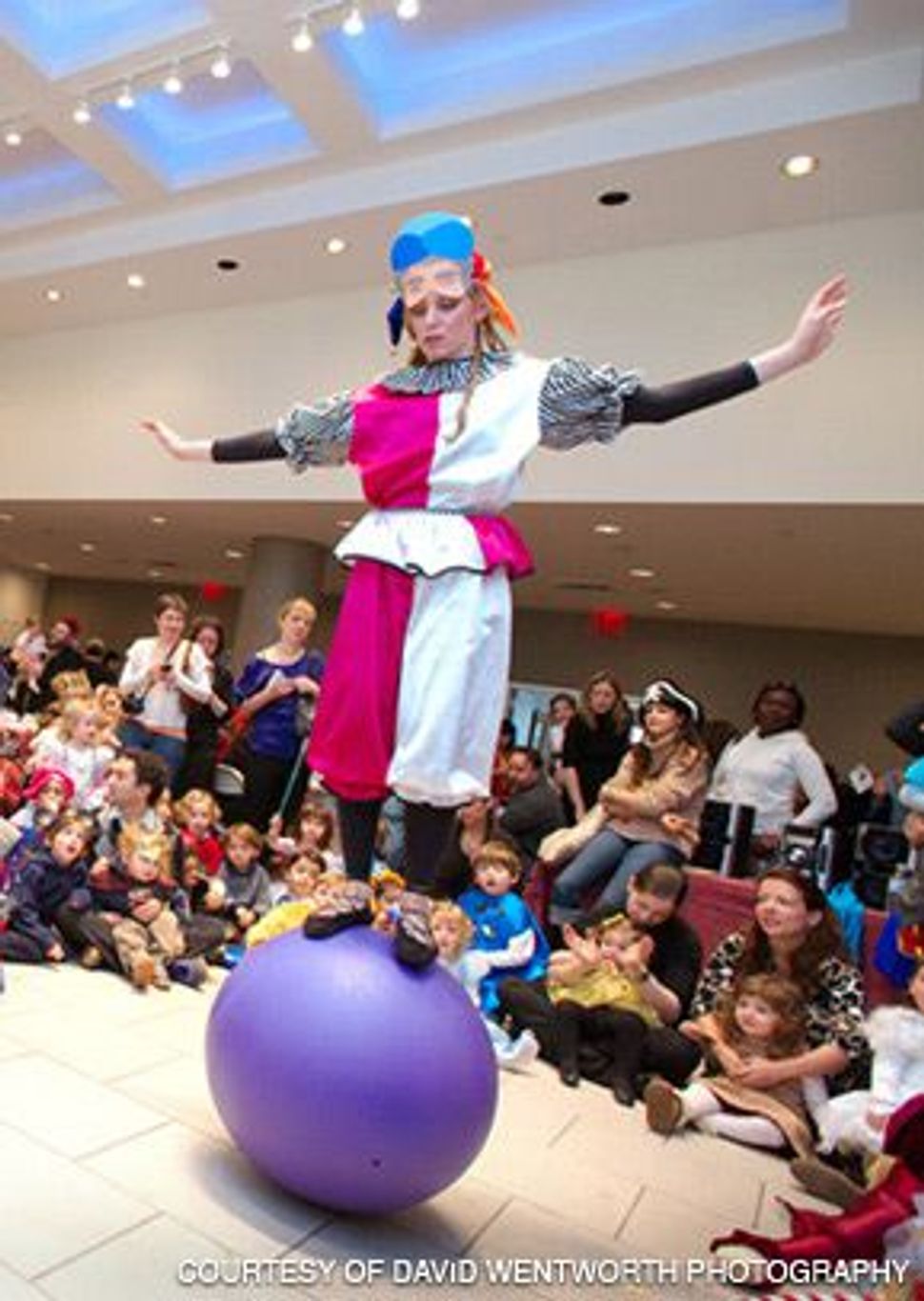 UNIQUE APPROACH: Lisa Appel (aka Miss Lisa) incorporates her background as a dancer and acrobat with her training in formal education to teach about Jewish issues.

Lisa Appel spends more time standing on her head than most Jewish educators spend on their feet. The classroom veteran with an affinity for Hebrew songs also spins more plates and juggles more scarves than her colleagues, and she’s more likely to teach in sparkly attire and a bright-pink wig. 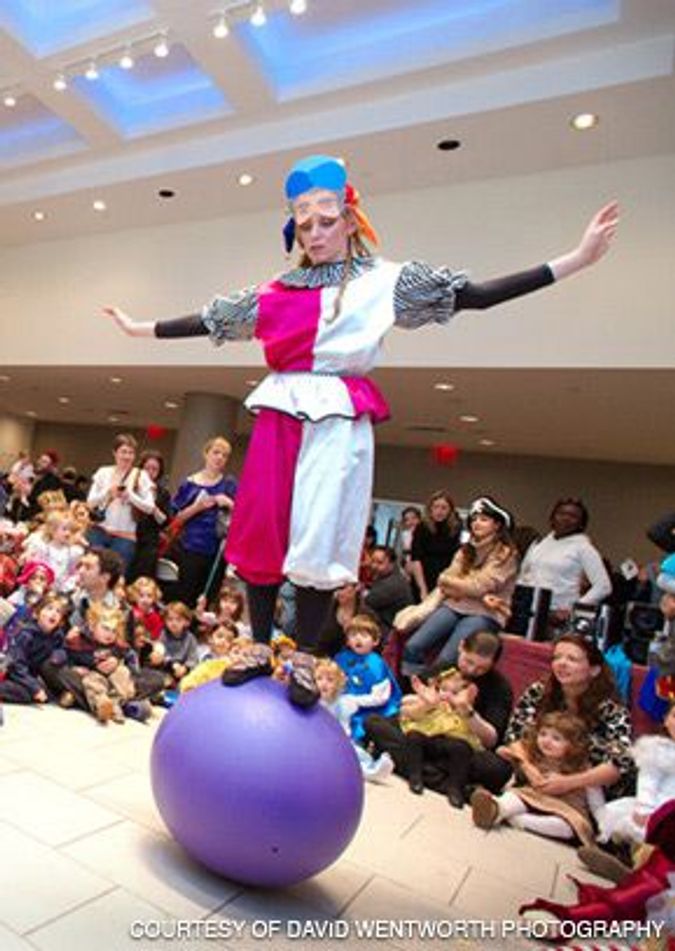 UNIQUE APPROACH: Lisa Appel (aka Miss Lisa) incorporates her background as a dancer and acrobat with her training in formal education to teach about Jewish issues.

In other words, Appel is not your typical religious instructor, even if many of her goals are the same. “I’m a teacher, regardless of how flamboyant I want to be or pretend to be,” she told the Forward recently in a phone interview from her Philadelphia-area home. “We’re not just spinning plates — sometimes we’re speaking Hebrew, sometimes we’re singing in Yiddish.”

And sometimes, depending on the venue, Appel and her students talk about such subjects as assimilation and the Ten Commandments, though often with the aid of hula hoops or puppets.

Appel’s unconventional teaching style has earned her a growing circle of students over the past two years. She founded her own teaching business, Miss Lisa, Inc., in 2006. Her lessons, usually delivered in single sessions tailored to the curriculum of an individual group, combine Appel’s background in formal education with her years as a dancer and acrobat. The sessions are taught by her alter-ego, Miss Lisa, rather than by the more teacherly Ms. Appel.

“I named my company Miss Lisa, Inc., because I incorporated myself. It’s everything I love, all together,” Appel said. “The circus gimmicks and other things I do, they really capture the attention of my audiences.”

Appel hopes those audiences will expand in the coming months to include more observant men, whose traditional conception of modesty she’ll accommodate with several male counterparts she’s currently training. But while Appel will remain behind the scenes for those shows, she’s front and center in new classes she recently began teaching for preschoolers, and she said she’s learning sign language for shows she’d eventually like to host for the deaf.

With a bachelor’s degree in education from Philadelphia’s Drexel University, Appel taught full time for seven years before starting her business, where she has continued to rely on a rule she learned as a schoolteacher: “If you can stand on your head, students will look at you.”

Because of her work as Miss Lisa, Appel has achieved additional freedom to fuse her physical and educational talents. Formerly a juggler and acrobat in her spare time, she experienced her “revelation” about merging her gifts while she performed as “the lovely assistant” at a variety show in Atlantic City.

“I went to college after high school, because that was the responsible thing to do,” the 34-year-old recalled. But being in the classroom full time, a position she’d originally seen as a fallback, “wasn’t meant to be.”

Since founding Miss Lisa, Inc., Appel has taught and performed for groups ranging from synagogue sisterhoods to audiences at Chabad Houses. While there’s no single format for a lesson, Appel said most appearances begin with the performer pulling up to a venue in her SUV and unloading a client-specific combination of feathers, vanishing crayons and tumbling mats. (A balance beam, parachute and holiday paraphernalia, like a lulav, are sometimes involved.) Though most Miss Lisa programs focus on Jewish ritual and history, others deal with more general topics, like time management and making friends.

“When she was here, she was teaching the kids how to get along with each other, how to work together and help each other,” said Selma Roffman, director of education at the Voorhees, N.J., Jewish school Kellman Brown Academy. “She juggled plates and cooked imaginary soup with the kids. They were mesmerized.”

For other groups, Appel has created programs on such topics as ancient Jewish prophetesses and even the Holocaust, sometimes handing out written material she has prepared to supplement an individual lesson. “I do a lot of research,” she said. “Every program is different. I don’t take responsibility for saying, ‘This is what’s important about this holiday,’ or, ‘These are the objectives.’ I speak to the client and present them with a menu of choices.”

As a result, Appel has been able to accommodate a wide variety of groups, abandoning her tighter tumbling outfits, for example, when appearing before religious audiences. But while she’s happy to wear a skirt and cover her hair, her lessons retain her personality regardless of who’s watching. “I will wear a skirt,” she said. “I just won’t stand on my head. But the skirt will be sequined, and my hair will be colored — with a pink or purple sheytl.”

She sees the physical part of her teaching as a way to demonstrate key metaphors, literally juggling with students as part of a presentation titled “The Balancing and Juggling Act of Being Jewish in a Non-Jewish Society.” She even uses movement and rhythm to teach about the Holocaust, describing a lesson in which she asked children to join her in a modern dance routine before initiating a discussion on when to follow and when to lead. She’s careful to note the limits of the program — “I don’t mean it to replace a speaker coming” — but said the lesson can create a “powerful connection” to a difficult topic, one that young audiences might otherwise be inclined to avoid.

As her company develops its client list, Appel continues to expand her own education, pursuing a master’s degree in Jewish studies at Gratz College in Melrose Park, Pa.

And how does she know her lessons are getting through, that students aren’t merely entertained by her tricks?

“I ask them,” she said, “and I do a follow-up to check. It’s the same as regular teaching.”