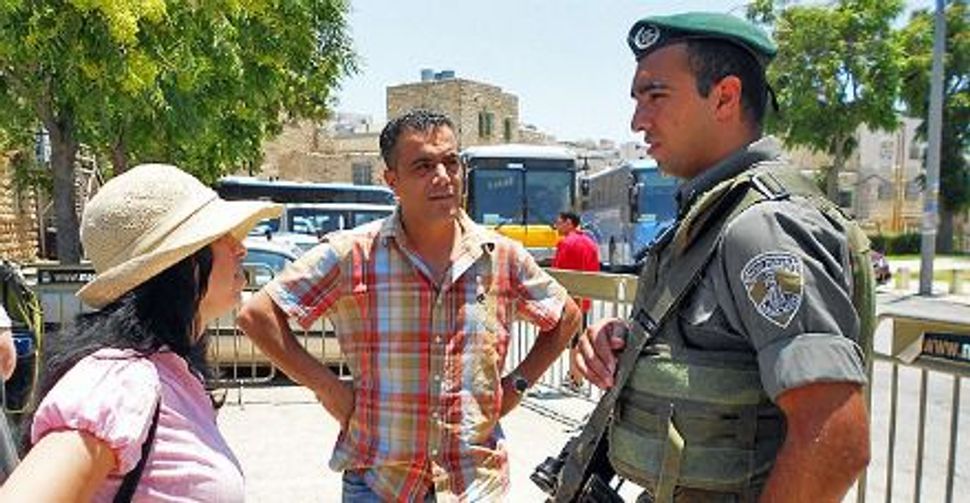 Image by courtesy of mejdi

A group drives up to the Mount of Olives and takes in the vista below: the Old City of Jerusalem; the Dome of the Rock in the near distance; the modern city a bit farther off.

An Israeli tour guide begins to explain the importance of this spot to the Jewish people. “King David,” he might say, “walked here.” He will explain where Jews could go, and where they could not, before 1967, and what the city’s unification meant for Jews the world over.

And then he will step aside and a Palestinian tour guide will step forward and explain how his people see this spot, what this view means to them. “You see that flag in the distance?” he might say. “That is a small settlement.” And he will explain what that settlement means to the Palestinians, and how it got there; he will talk about how a family was removed from their home — tricked or forced into giving up their land.

The Israeli will interject and provide the settler perspective. But they will not argue. They will simply show the two narratives, running parallel but in competition, rarely intersecting. They will ask the group how to resolve the moment.

The following day, the group will go to Yad Vashem and then Ammunition Hill. They will learn about the origins of the State, they will travel to a village at the edge of Jerusalem that was once Palestinian and they will hear from soldiers who served on both sides of the 1948 War of Independence.

This is a dual narrative tour, run by a unique tour company called MEJDI (Middle East Justice and Development Initiative). The company’s founders work at the Center for World Religions, Diplomacy, and Conflict Resolution, at George Mason University in Virginia, which is dedicated to promoting peace and understanding in the Middle East. MEJDI was founded, fittingly, by a Palestinian — columnist and peace activist Aziz Abu Sarah — and two Jews — Marc Gopin, a rabbi and professor at George Mason, and Scott Cooper. The group takes school groups, synagogues, churches, social organizations and individuals on tours around Israel and the West Bank, challenging travelers and students to gain a deeper understanding of the underpinnings of the conflict.

At a moment when the peace process has frozen, MEJDI offers hope, if not an easy answer. It also provides a chance for Americans to study with Palestinians and Israelis together, something that has become increasingly rare since the second intifada, when Palestinians from the West Bank all but completely stopped working in Israel proper. Groups are taken into the West Bank, students see where tour guides from each side are allowed to go and where they aren’t; they meet real people, living in real places, under real conditions, from the settlers of Gush Etzion to the Palestinians in Hebron.

“The idea of MEJDI is that every person on our staff has to be in some way committed to recognizing the dual narrative-ness of this region,” said Shira Nesher, 24, one of the Israeli guides in Jerusalem. Nesher, whose grandparents are all Holocaust survivors, served as a military guide in the army. She now studies political science and history at Hebrew University in Jerusalem. “One guide cannot be the whole Israeli narrative, and one guide cannot be the whole Palestinian narrative,” she said, explaining how the groups meet dozens of representatives from both worlds, something she had never done in her own youth. “People leave the tour very confused, and not pro-Israeli or pro-Palestinian, but pro-justice.”

Dave Schimdgall, 30, a pastor based in Washington, D.C., who has taken two tours with MEDJI, echoed those sentiments. “It’s kind of an alternative pilgrimage,” he said. “The goal is to get into the mess, embrace the tension and really learn about the conflict both past and present.”

Abu Sarah himself is a case study in the region’s complexities. When he was 9, the first intifada began, and his older brother was arrested and accused of stone throwing. His brother, Abu Sarah explained, was tortured and, eventually, confessed. He never came home. He was released from detention directly to the hospital, where he died of internal bleeding. Abu Sarah became radicalized, joining the youth wing of Fatah, the Palestinian political party. He was throwing stones at age 11 and distributing political pamphlets by 16, refusing to learn Hebrew as he studied. But at 18, he graduated from high school and realized life in Jerusalem without Hebrew was impossible.

So he enrolled in ulpan, or Hebrew language school. “That was my transformation moment.… I met Israelis for the first time in my life who talked about Palestinians’ freedom. When I grew up, I never saw Peace Now or any lefty Jewish organization. It was only when I was studying Hebrew that suddenly I realized there are Israelis who are not supportive of the occupation.”

Abu Sarah formed a Palestinian branch of the Israeli Bereaved Families Forum and began walking a path of nonviolence. He studied tourism and then religion and conflict resolution. “It started a process, a process of what to do with my anger about my brother’s death…. Working for peace became part of my mission,” he said. He worked on a joint Israeli-Palestinian radio show and began training Palestinian youth in nonviolent social action. Then, in 2008, he met Cooper, who invited him to meet the director of George Mason’s conflict resolution department, Gopin.

With Abu Sarah’s expertise in tourism in mind, the three formed MEJDI. Students eager to earn college credit and expand their understanding of regional problems quickly signed up, as did church and synagogue groups. The program has become so popular that today MEJDI also operates in Turkey, Egypt and Jordan, with the aim of expanding to Greece, Armenia, South Africa and Ireland.

So far 20 groups have gone on MEDJI tours to Israel and Palestine, and at least another 10 are planned for 2012 (two already left in January). It is not, the group emphasizes, just about left-wing groups; AIPAC hired MEJDI to spend a day with its youth leaders. They strive to be neither left nor right on the spectrum. Most trips are 8 to 10 days, but they are tailored to fit each group.

“It is difficult to see injustice, and it is also difficult to see blaming of those carrying out injustice. It is challenging to hold all the perspectives together. This trip has strengthened my intention to be able to support both peoples, and to be a dedicated Jew,” wrote Melanie Malka Landau, a lecturer at Monash University in Australia, on her blog after her experience with MEJDI.

Kathryn House, 30, a Ph.D. candidate in theology at Boston University, went on a MEJDI tour offered through the school the first week of January. “They really do a great job of complicating even the dual narrative,” she said. “We were left to say, ‘What will we do with those narratives?’”

In 2011, the group won the United Nations’ Alliance of Civilizations Intercultural Innovations Award in Doha, and Abu Sarah was named an “emerging explorer” by National Geographic, which now uses MEJDI as its tour operator in the region, with Abu Sarah as the host.

MEJDI has another mission: to pump money into the economies on either side. “We… realized that tourism was a potent force in the Holy Land… but that the conflict was hampering the access and even the enthusiasm for visiting the Holy Land, or Israel and Palestine. We figured that we could invite people into two narratives, the Jewish one and the Palestinian one, as a positive way to engage in tourism,” said Gopin.

Cooper agreed. “We thought it was an opportunity [to] make positive change and… do it in a sustainable way,” he said. “Many of our speakers are in the peace-building community; we pay them well. It’s a nice way to encourage collaboration.”

Sarah Wildman writes about the intersection of culture, politics and travel for The New York Times and for PBS.