Before sending her 6-year-old son, Charlie, off to day school in September, Brenda Hite wondered if she’d made the right decision. Neither Hite nor her husband, Tom, are Jewish, but the public school options in their hometown of Akron, Ohio, didn’t enthrall them. So they applied to the local Lippman School, which impressed the Hites with its new global perspective and its energetic and experienced educators.

“Once we learned more about the Jewish culture and religion, and how steeped everything is in Old World values, the Lippman School became very attractive to us,” said Hite, who, like her husband, grew up in a Christian household. Also, she said, “It didn’t feel like Charlie would get the individualized attention at a public school that he would receive at Lippman.”

“It was kind of a leap,” admits Hite. “But after the first day, our son was all smiles,” she said, adding that Charlie adores the school’s weekly Shabbat celebrations.

The Lippman School is engaged in an experiment of sorts among unaffiliated community day schools — one that may soon be replicated in several other shrinking Jewish communities. For schools in regions with declining Jewish populations, attracting families like the Hites could be just the buoy needed to stay afloat.

“Many day schools are valued because they offer what is perceived to be a high-quality education, and that’s not limited in appeal to Jews alone,” said Jonathan Woocher, chief ideas officer at the Jewish Education Service of North America (JESNA), an organization dedicated to strengthening Jewish education. Also, as with parochial Catholic schools, whose non-Catholic enrollment has increased in recent decades, the education at Jewish schools is “often offered at a price that is less than non-sectarian schools,” Woocher said. In Lippman’s case, that’s $7,500 annually.

But the solution runs the risk of polarizing Jewish families, according to Marc Kramer, executive director of RAVSAK: The Jewish Community Day School Network. “It’s an approach loaded with opportunities but also fraught with potential dilemmas,” such as how to handle kosher food policy and celebrations of Christmas, as well as interfaith dating among older children, he said. “[However] we do not want a vibrant Jewish education to be only in big city centers. We need Jewish education to be a viable option all over America.”

The strategy could also potentially backfire if Jewish families flee, fearing dilution of Jewish content and experience, or that their donated dollars are going to non-Jewish causes. At Lippman, for example, financial aid is available for both Jews and non-Jews, and while specific dollars go toward supporting Judaic studies programs, local Federation money supports the entire school.

What’s more, admitting non-Jewish students to Jewish day schools brings up serious philosophical questions about the nature and purpose of Jewish education. Jewish day schools have always seen themselves as educating the next crop of Jewish leaders in order to reverse the tide of assimilation. By bringing non-Jews into the mix, they might be hindering their own cause.

“Here’s what you need to think about: Can schools that take in non-Jews maintain their core Jewish identity and mission over the long term? In the beginning they might, but what happens over the long term? Does that get diminished?” said Amy Katz, executive director of the Partnership for Excellence in Jewish Education.

Even so, Lippmann isn’t the only day school to bring non-Jews on board. In fact, another Ohio school — Akiva Academy in Youngstown — seems to have reversed its ill fortune by stepping up efforts to appeal to both Jewish and non-Jewish families. Akiva saw its population shrink from more than 120 children in the 1980s to just 42 students last year. But at least partly due to its marketing campaign targeting Jews and non-Jews, enrollment this year increased to 78, and 17 children have already applied for kindergarten slots for the next school year, according to Kathy Mioni, the head of the school.

Other schools appear to be following suit — or at least looking into the possibility — as a way to save their schools. Take the Kadima Jewish Day School in Buffalo, N.Y., which has lost nearly a quarter of its students in recent years. Kadima’s administration is now looking into admitting non-Jews. “It’s simply financial. The money lost has caused a real crisis for this school,” said Deborah Pivarsi, controller of the Jewish Federation of Greater Buffalo.

The New Orleans Jewish Day School also may reconsider its policies. The school experienced a dramatic decline in enrollment after it was forced to shut down for the 2005–06 school year following Hurricane Katrina, dropping from 85 students then to just 50 today. “We’re in the process of deciding whether to be intentional about marketing to non-Jewish students,” said Bob Berk, head of the school.

Although the school has admitted non-Jewish children since Katrina, it has not been deliberately seeking them. But Berk is left with a dilemma. “We are cognizant of what many term the ‘tipping point,’” he said. “At what point does an increasing percentage of non-Jewish students in the school lead to a school that doesn’t feel Jewish?”

The changes at the Lippman School followed a yearlong conversation involving more than 30 focus groups. The school decided to market itself to a wider public with billboards and radio ads, to drop the word “Jewish” from its name and to more actively promote itself to members of the JCC, whose campus it shares.

In what might be considered its boldest move, Lippman also implemented a dual curriculum in September 2010. It offers families the choice between two concentrations: one global in focus, with Spanish language; the other Jewish, with Hebrew language.

For Charlie Hite and his peers in the new global studies concentration, this means studying Spanish and world cultures for eight 40-minute periods each week, while his other classmates head to Judaic studies and Hebrew. Children enrolled in the global studies concentration also take a class called “core values,” which compares Jewish values with other cultural and religious values. The school celebrates Jewish holidays, but not those belonging to other faiths.

Lippman’s transformation “was born out of necessity, but there are many learning opportunities that the school is exploring now,” said Sam Chestnut, who came to the Lippman School in 2011, after eight years as the head of Cleveland’s Lillian and Betty Ratner School, which has a Jewish background and a current commitment to diversity.

Could the Lippman model be applied to the Solomon Schechter network of Conservative schools, which, according to a recent study by the Avi Chai Foundation, has seen the largest dips in enrollment when compared with other networks?

Elaine Cohen, who is director of the Schechter Day School Network, thinks not. “I believe that the Solomon Schechter schools have as their mission to inculcate Jewish literacy as well as values,” she said. “I think that living Jewishly is at the core of the Schechter education, so making Jewish studies an option would not align with the core mission.”

At Lippman, Mary Hickcox, a Jewish parent who participated in the strategic planning committee, said she feels optimistic about the new model. Regarding her two daughters, she said, “They are sharing their Jewish culture with non-Jewish children. It’s a great way to go into the world.”

The multicultural emphasis intrigued Lisa Dennis, a Unitarian Universalist who grew up in a Christian home and has a Christian spouse, but believes in “taking the best from all perspectives.”

When she spotted a billboard while driving on West Market Street near her home in Akron, advertising “Global perspective; individual focus; now offering Spanish,” she thought: “Oh wow, now the Lippman school has everything.”

Her daughter, Jace, now in fourth grade, transferred from her Montessori school last year. Other than worrying whether she should wear her Santa Claus earrings to school in December, Jace adjusted to Lippman without issue.

Elicia Brown is a freelance writer living in New York. 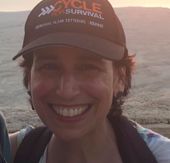