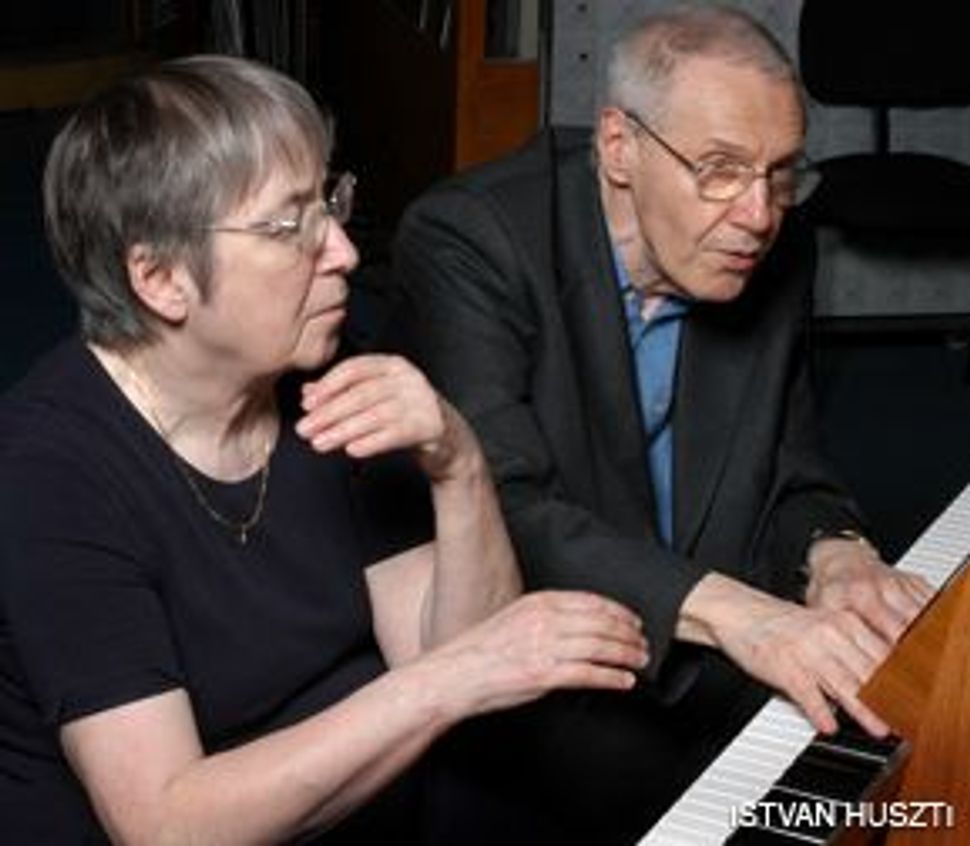 QUITE THE DUO: Márta and György Kurtág at the piano.

Music generally eludes accurate verbal descriptions, but rarely as often as in the case of 82-year-old Hungarian Jewish composer György Kurtág. On February 1, Kurtag will perform a recital of his piano music with his wife, Márta, at Carnegie Hall’s Zankel Hall. (At that same venue, a day earlier, Peter Eötvös will conduct a concert with more music by Kurtág.) A lean, professorial man with close-cropped gray hair, Kurtág writes music that is aphoristic in its high-pressure concision, as if he were a Hungarian-Jewish version of Anton Webern. 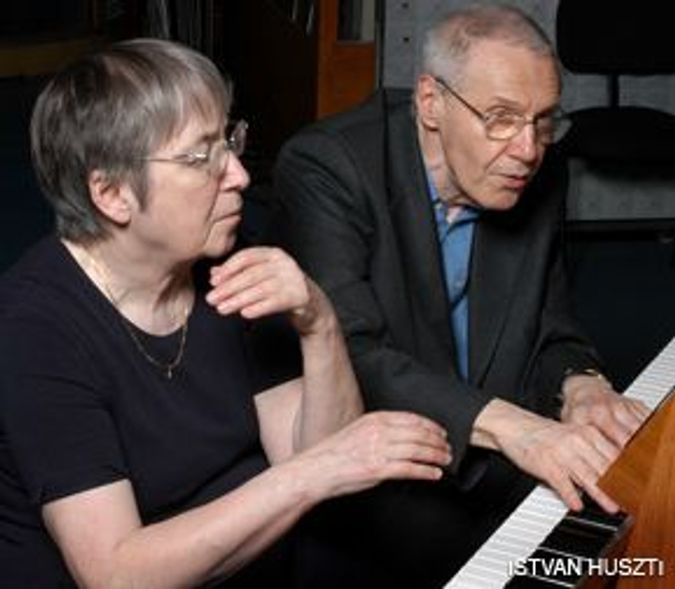 QUITE THE DUO: Márta and György Kurtág at the piano.

As a one-off individualist, Kurtág puts notes in unusual and unexpected places, and no one can imitate his compositional style. More influential to later generations of performers is his work as a chamber music coach, during which he readily admits to “putting students through hell” by examining every measure of a work before they can experience joy from performing it.

Critics repeatedly refer to the composer’s “monastic seclusion,” and one even said that his composing process is “like a monk mortifying the flesh.” Though some might think he resembles one of the extras from the 1986 film “The Name of the Rose,” Kurtág is in fact a doting father and grandfather who is influenced by his Jewish family heritage, and this becomes quite clear on listening to certain works of his.

One such work is “Kafka Fragments” (“Kafka-Fragmente”), for soprano and solo violin. It includes a “Hasidic Dance” set to Kafka’s wistful words: “Once I broke my leg; it was the loveliest experience of my life.” As a teenager, Kurtág studied composition in Temesvar (Timişoara) with A specialist in Jewish folk and liturgical music, Mihály (Max) Eisikovits (1908–1983), who wrote in the preface to his “Songs of the Martyrs: Hassidic Melodies of Maramures” (Sepher-Hermon Press) that nigunim, from a “musical point of view… unquestionably constitute the most original and noble aspect of Jewish folklore.”

“Hasidic Dance,” a portion of “Kafka Fragments,” expresses rough, unsentimental folklike power, as well as the topsy-turvy absurdist element of turning somersaults in the marketplace, associated with the messianic movement. In 1940, when World War II broke out, Kurtág was studying with Eisikovits in Timişoara, from which Jews were not deported as much as elsewhere in the region, and so he managed to survive the war.

In another section of “Kafka Fragments,” labeled “Penetrant Jüdisch” (mistranslated, on the ECM label, in the booklet notes of an otherwise excellent performance as “offensively Jewish”), the German word penetrant means “penetratingly, overpoweringly, insistently.” Kafka’s maxim in the same musical passage (“In the struggle between yourself and the world, side with the world”) underlines how well Kurtág understands Kafkaesque sly wit and resignation to human weakness.

This is only natural, since Kurtág has identified so closely with Kafka as to represent himself as an incarnation of Gregor Samsa in “Metamorphosis.” As recounted in the perceptive 2007 documentary film “György Kurtág: The Matchstick Man,” now available on DVD from Ideale Audience, after Kurtág travels to Paris in the 1950s for further studies, he feels somewhat like a “cockroach striving to change into a human being, seeking light and purity.” Rereading Kafka’s “Metamorphosis” obsessively, he was eventually helped by depth analysis with Hungarian-born psychoanalyst Marianne Stein. The benefits were immediate. In addition to giving him a “moral demeanor,” Stein helped Kurtág, the latter asserts, to “stop lying to myself… [and] concentrate on essential things.” Using a form of art therapy involving the construction of small sculptures out of matchsticks (whence the documentary’s title), cigarette butts and tufts of dust, Kurtág slowly developed what his longtime friend, Romanian-born Jewish composer György Ligeti (1923–2006), called Kurtág’s “fantastic inner concentration” on “tiny, subtle gestures.”

Such aspects are evident in Kurtág’s “Games” (“Játékok”), a still-unfinished work for piano four hands that Kurtág has been working on for three decades, excerpts of which are part of the Carnegie Hall performance. Already brilliantly recorded by Kurtág and Márta on ECM, “Games” interlaces original compositions with transcriptions of Bach, conjuring up a world of Central European domestic music making. The excerpt “Slaps — Squabbles” (“Schläge — Zank”) expresses a conversational spat, with the distracted nagging that is to be expected in any long-term partnership. Arguing, like music, is a domestic form of entertainment. Also in “Games” appears an “Homage to Márta Kurtág,” which on the ECM recording prefaces several solo pieces played by Márta, herself a masterful student of composition who offers advice on every note written by her husband.

Kurtág is not always a miniaturist, and this is notable in “Stele” (1994), a mighty work for large orchestra, composed for Claudio Abbado and the Berlin Philharmonic, in which, like all major artists, he defies generalizations and expectations. His compositional approach, aspiring to the simplicity of Gregorian chants, creates music, Kurtág said, from “almost nothing, without any material so to speak, quite simply because something happens which transforms nothingness into movement.” This approach strongly echoes French-Jewish philosopher Vladimir Jankélévitch (1903–1985), whose book “Le je-ne-sais-quoi et le Presque-rien” (The Indescribable Attribute and the Almost-Nothing) inhabits comparable theoretical terrain.

But although writers make his music seem impossibly ethereal and abstruse, it’s worth recalling that in the 1990s, Kurtág the man relocated to Saint-André-de-Cubzac, a no-frills, down-to-earth small town outside Bordeaux in southwestern France. Offering tourists little except the gravesite of native son Jacques-Yves Cousteau, it’s the town where Kurtág’s son, aspiring composer György Kurtág Jr. — a fan of electronica who is inspired by The Beatles and Jimi Hendrix — lives with his family. According to Junior’s Web site, one of Kurtág’s teenage grandsons, Raphaël, currently aspires to be a dancer in a boy band. The realization of this dream might make some grandfathers react “like a monk mortifying the flesh,” but surely Kurtág will merely offer a Kafka-like smile and shrug of resignation, since he is not just a great composer, but a loving family man, as well.

This domesticity is essential not just to Kurtág, but also to other composers — especially Ligeti — featured in the concert series “Celebrating Hungary,” which runs at New York City’s Carnegie Hall from January 24 to February 14. I well recall asking Ligeti, during a Paris interview that took place around 1990, whether some of the humanitarian awards that he himself had received asked too much saintly activity from a man whose chief responsibility was to write good music. Ligeti agreed absolutely, saying, “Two things are of essential importance to me: composing music and making love to my wife.” So much for the “monastic” school of modern Hungarian composers.

To watch a clip from “György Kurtág: The Matchstick Man” click here.