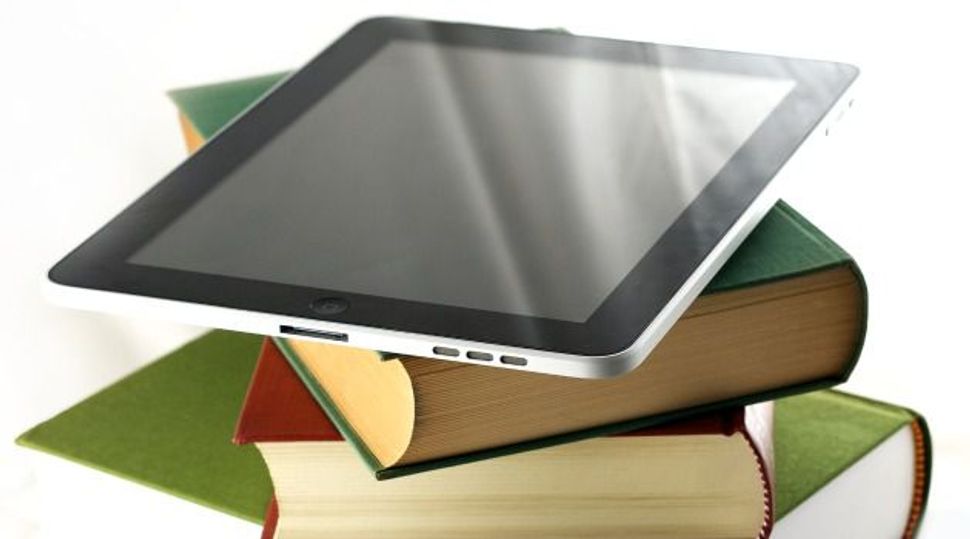 iPad in Day Schools: Jewish day schools are using tablets in the classroom. Image by istock

Toward the end of his life, Apple’s visionary leader, Steve Jobs, was visited by another computer innovator, Microsoft’s Bill Gates. The conversation turned to the future of education.

As related in Walter Isaacson’s recent biography of Jobs, both men agreed that computers had made surprisingly little impact on schools.

“Computers and mobile devices would have to focus on delivering more personalized lessons and providing motivational feedback,” Gates said. One of the many projects Jobs had hoped to develop before he died, Isaacson explained, was “to disrupt the textbook industry and save the spines of worn-out students by creating electronic texts and curriculum material for the iPad.”

Jobs might have been happy to learn that at least two Jewish schools are already aiming to do precisely that. The Scheck Hillel Community Day School in North Miami Beach is now offering an entirely paperless Talmud course, thanks to the iTalmud app.

“The increased levels of engagement, portability, and space and cost saving have been enormous,” said Seth Dimbert, the school’s director of learning technologies. “Normally, when you study the Talmud, each page is covered with cross-references and tertiary commentaries, and you have bookshelves filled with dozens or even hundreds of secondary reference texts. Using an iPad application puts all of that reference material in hypertext. It’s an ideal way to study the Talmud, which is in some sense the original hypertext.”

The leader in iPad integration in Jewish schools is probably Frankel Jewish Academy in suburban Detroit, whose students began this school year with a nice surprise: Each received a new iPad2, thanks to a generous gift from a donor.

“The move to this incredible new technology gives teachers access to so many more sources and enables students to leverage their learning,” said Patti Shayne, the school’s director of technology. ” With the iPad, students have one central place for assignments, communications and in many cases, text books and reading material. They will be able to access sources not available before. Our job is to make that learning as inspiring and exciting as possible and prepare FJA students for a future where competency with all web-based devices is the norm.”

The students aren’t the only ones in the school who have embraced the iPads. The teachers had a chance to play with them before the students even returned from summer break. One teacher at FJA was already an iPad pro: Robert Walker, who teaches government, was an early adopter of the iPad.

“Where I see the iPad really impacting learning is that it appeals to so many different learning styles: Students will have more freedom in choosing the direction they want to go to master their coursework,” Walker said. “While meeting the requirements, students will also have the ability to go above and beyond what they are required to do. It’s a powerful tool that will support learning in any number of ways.”

One way the iPad will help students learn is by giving them the opportunity to review a lecture they might not have fully understood the first time. FJA’s chemistry teacher recorded himself going through a problem and then uploaded the video onto the students’ iPads.

“Students now have the opportunity to watch his demonstration several times,” Shayne said. “Sometimes you don’t catch it all and some students are hesitant to speak up. With the iPad they can listen to the explanation as many times as they need at home or at school.”

Are the students using the iPads for serious academic work or are they just expensive video game consoles with a pretty screen?

“In Jewish Leadership, our teacher, Mr. [Marc] Silberstein, is trying to be completely paperless, so we went over the syllabus on our iPads and got to play around with the neuAnnotate app to annotate it,” she said. Wolf also noted that it’s common to see her peers playing the popular game ‘Words with Friends’ on their iPads during study hall or even in class, which is frowned upon.

“We used to teach technology as a subject,” said Shaindle Braunstein-Cohen, director of Detroit’s Project Chesed and a former director of the David B. Hermelin ORT Resource Center in West Bloomfield, which provides technology services to the community. “We would teach how to use a device. It’s no longer the ‘something’ that we teach; it’s the platform on which we deliver information.”

So, what’s next? Shayne anticipates the current crop of iPads will be used for about three years before they are refreshed. “As to what the future holds,” she said, “maybe one of our students will invent it.”