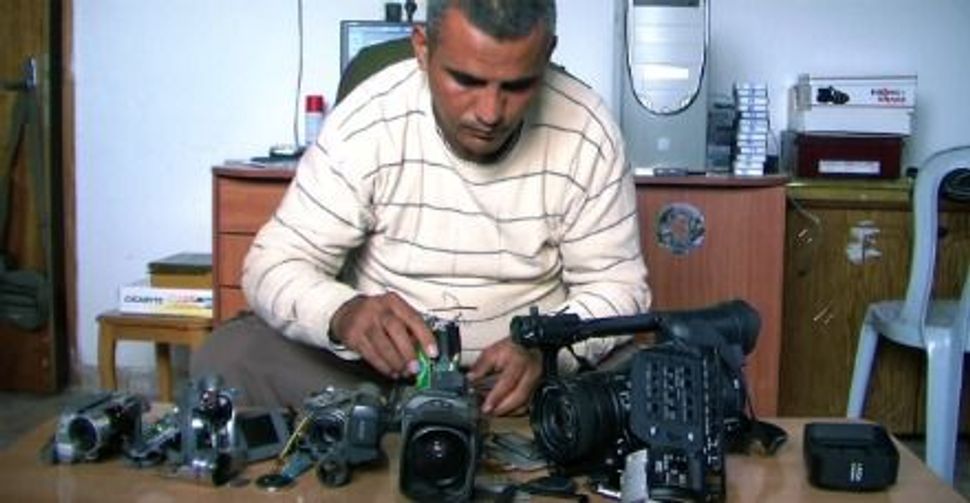 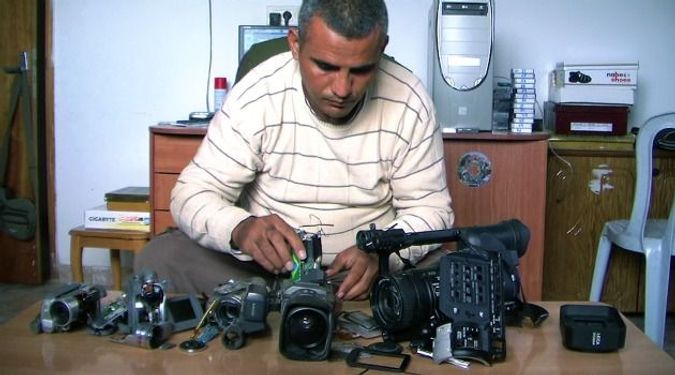 Two Eyes, ?5 Cameras?: Director Emad Burnat got his first video camera to film his son. It would open up an unusually candid window on Palestinian life under occupation. Image by courtesy of sundance film festival

Selling out a screening or getting a standing ovation at Sundance is hard enough for a seasoned filmmaker, let alone for a farmer from the West Bank. But director Emad Burnat, from the village of Bil’in, brought Park City, Utah, to its feet with his debut documentary about his family’s life beyond the security barrier and amid Israeli settlements.

Shot from his own perspective, “5 Broken Cameras” is a refreshing change from documentaries with political agendas that reverberate throughout. Instead of an embedded political message, the film focuses on one person’s reality and his child’s vantage point. There’s no escaping the situation, but Burnat, who ends up filming his village’s non-violent response to Israeli settlement building and construction of the security barrier, begins his documentary by explaining that he actually bought his first video camera to film his son, who was born in 2005.

Over the seven years of filming, Burnat used six cameras, five of which were destroyed. The life and death of each camera has its own distinct chapter in the film.

Co-produced by Israeli Guy Davidi, the film gives the majority of airtime to Burnat; however, footage of Israelis from all walks of life joining villagers from the West Bank in non-violent protest is one of the most powerful parts of the documentary.

Armed with a video camera, Burnat documents the changing landscape of his village and the surrounding area as the security barrier is built, settlements spring up and religious Jews move into complexes that tower over Palestinian villages in the disputed territory. Similar to the 2009 film “Budrus,” about a Palestinian village’s nonviolent response to the security barrier, “5 Broken Cameras” does not focus on media attention, but rather on family and personal experience through the eye of the camera lens.

Burnat has a way of constantly juxtaposing joy and pain. Footage of army aggression and village protests sits alongside happy family events, footage of his son, Gibreel, and his patient and brave wife, Soraya. In between bursts of occasional gunfire, he captures the innocence of Gibreel’s childhood. The child’s laughter, first words and intimate family moments illustrate how life continues even in challenging times.

One of the main characters in the film, Phil, is a village leader and charismatic big brother to the children in Bil’in. Young, broad-shouldered and full of hope, he has a following of young boys who look up to him. Phil, a Palestinian, is always pushing for peaceful resistance, even as grenades and tear gas are lobbed and rubber bullets fired at the villagers. It is important to see another, less publicized side to the resistance — a non-violent approach. At points during the film, it is hard to imagine how Phil maintains dedication to peaceful resistance as progress seems non-existent and Israeli military incursions are continual.

While viewers who have knowledge about the West Bank may be aware that non-violent protest is not the norm, the point of Burnat’s film is to represent his experience, from his point of view. The film’s goal is not to show whether the rationale for the barrier and checkpoints — to reduce bombings — has been vindicated.

Instead, the audience witnesses the progression of the villagers’ anger as little seems to change for the better in Bil’in. Indeed, things get ever worse as the IDF enforces laws that are not explained to the villagers.

Burnat and Davidi focus on youngsters in Bil’in rather than on hardened villagers that audiences often see in documentaries about the West Bank. This approach offers a glimmer of hope when hope seems fleeting. Instead of seeing enraged Palestinian children as rock throwers on the road to extremism, the film suggests that the children in the village are committed to a non-violent approach to resistance. In “5 Broken Cameras,” the kids carry banners in protest, and in one scene Gibreel hands an Israeli soldier a symbolic olive branch as he passes through the barrier. This illustrative scene depicts not only the positive interaction between two people, but it shows as representative interaction between Palestinian and Israeli that is deliberately not violent.

As the documentary progresses, we witness Gibreel’s growth from a baby to a sensitive boy. He and the audience become aware of what is going on around him, and the physical separation between the Arab and Jewish West Bank is seen through the eyes of a child. He sees the division between two populations, not just a line to separate two lands. The disturbing image of young boys with peyes and tzitzis playing in beautiful apartments in settlements that peer down at Palestinian children in semi-permanent shacks sticks with the viewer. Men dressed in suits and black hats throw violent punches at Burnat as he films. It is hard not to share a sense of frustration.

While the film focuses on peaceful demonstration and a non-violent approach to Palestinian protest, “5 Broken Cameras” lacks explanation as to why Israeli soldiers entered the village of Bil’in in the first place. The trade-off in offering an individual perspective is that the film does not show the broader clash of systems that has led to terrorism, on the one hand, and Israeli incursions and searches, on the other. Throughout the film, viewers see uniformed IDF soliders launching grenades and tear gas at villagers during what look like non-violent protests. The villagers are understandably upset, but the lack of context undermines any larger claim for justice.

Nevertheless, “5 Broken Cameras” subtly reinforces hope for peaceful co-existence between Israelis and Palestinians, a much needed belief when peace seems far-fetched. The co-production of this film, combined with the portrayal of Palestinian children and villagers who resolve to accomplish political change through peaceful means, can only strengthen even a discouraged viewer’s resolve to achieve peace. As Burnat says: “It takes strength to turn something negative into something positive.”

Abra Cohen is a freelance writer and photojournalist based in Eugene, Oregon.