The Cup of Liberation 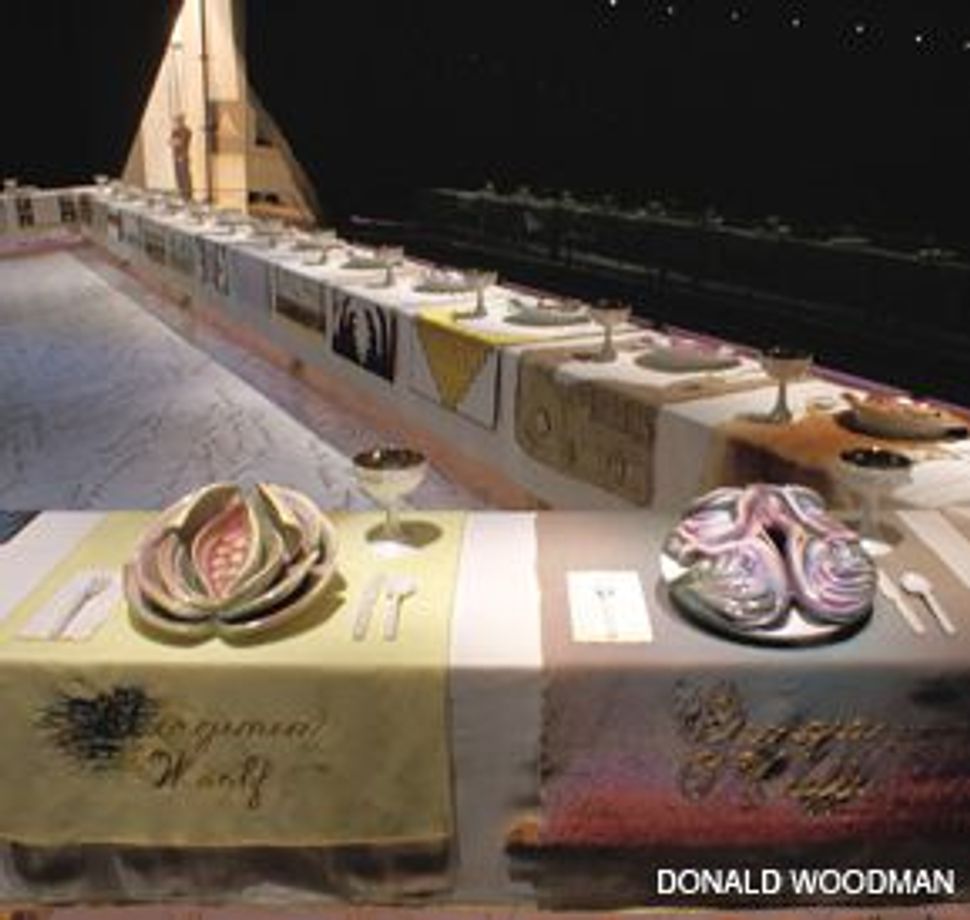 FROM MAKING ROOM AT THE TABLE TO IRONIZING THE TABLE: Judy Chicago?s ?The Dinner Party? (1974-1979, above) and Beth Grossman?s ?The Good Wife? (2004, below) exemplify some of the changed understandings of different generations of Jewish feminist art.

New Jewish Feminism: Probing the Past, Forging the Future 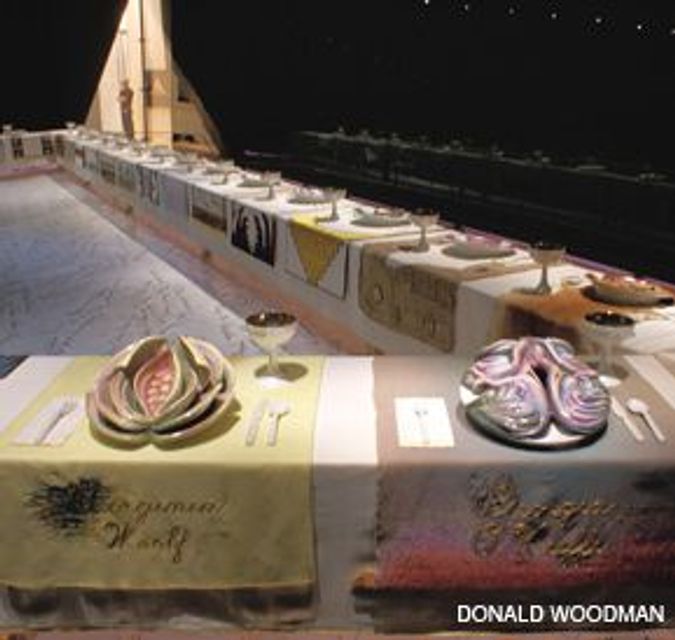 FROM MAKING ROOM AT THE TABLE TO IRONIZING THE TABLE: Judy Chicago?s ?The Dinner Party? (1974-1979, above) and Beth Grossman?s ?The Good Wife? (2004, below) exemplify some of the changed understandings of different generations of Jewish feminist art. 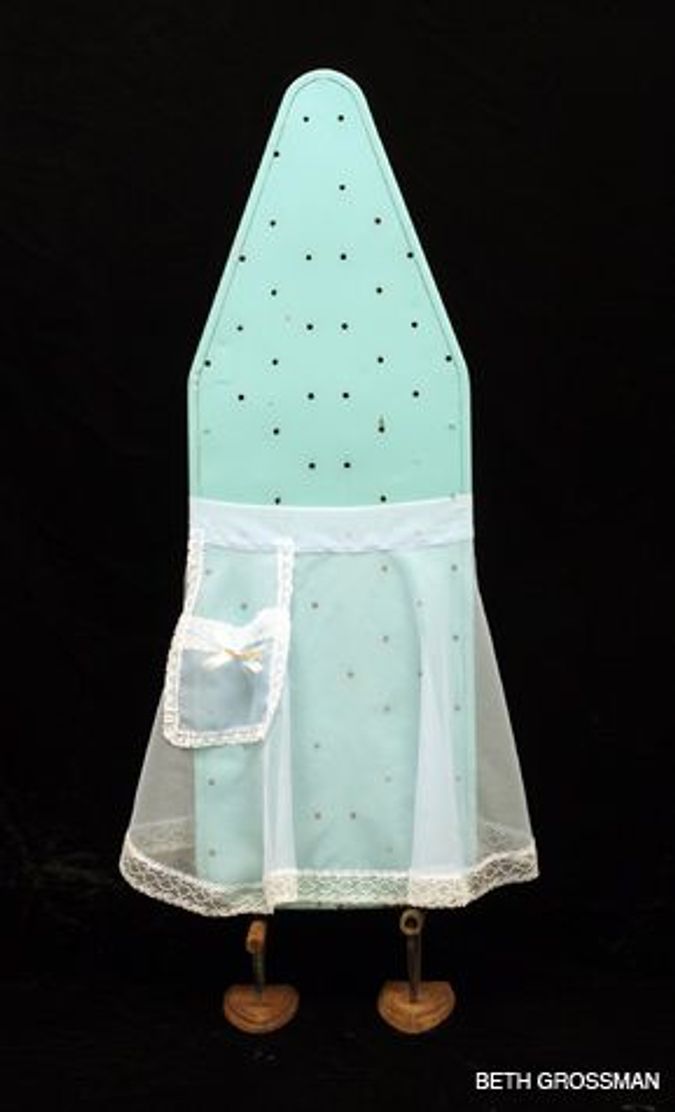 Our family’s Passover Seders are always large and boisterous, but I wasn’t prepared for the mini-rebellion that occurred a few years ago. Like all good feminists of a certain age, I relished the chance to sprinkle my table with objects meant to symbolize the role women played in the great story told that evening. A tambourine, for the song Miriam led when the Israelites had crossed the Red Sea. A Miriam’s cup filled with water, to balance Elijah’s cup of wine. An orange on the Seder plate, to connect with Jews who remain marginalized from our tradition.

I was sure that the several young women at the table would appreciate the gesture. I was wrong. Instead, my guests — raised as Conservative Jews, with highly achieving mothers and prestigious day school educations — politely derided these feminist additions as silly and unnecessary.

This memory tugged at me as I read the comprehensive anthology “New Jewish Feminism: Probing the Past, Forging the Future,” edited with care and commitment by Rabbi Elyse Goldstein. The book catalogs the tremendous changes in Jewish theology, scholarship, rituals and synagogue life sparked by ardent feminists of all denominations (though mostly non-Orthodox) — in a way that will leave any reader impressed by what has been accomplished in only decades. But few of the essayists offer much insight as to why my Seder guests reacted the way they did, and what that might mean for our feminist and communal future.

There is undeniably much to celebrate. As Anita Diamant notes in her cheerful foreword, “This is the first time in Jewish history that women’s voices — not just singular and extraordinary characters but a large and varied chorus — have been added to the public discourse about everything: about God and halakhah, about the governance of our synagogues, about marriage and how we educate our children, about our money, about the substance and fire of our lives.”

“Ima on the bimah is just no big deal,” Diamant notes. “How cool is that?”

It’s so cool that nearly half or more of the students at Reform, Reconstructionist and Conservative rabbinical seminaries are women — a stunning fact, considering it hasn’t even been 40 years since the first woman was ordained. Moses wandered for longer. Even the Orthodox are tiptoeing toward giving women rabbilike power. One of the more fascinating essays in the book is by Sara Hurwitz, who is designated a “religious mentor” at her Orthodox synagogue in Riverdale, New York, and takes on many rabbinic roles — presiding over prayers at houses of mourning, and even speaking from the pulpit. How this small but growing trend of Orthodox women taking on roles with real ritual power will fare against that denomination’s rightward march will be one of the more intriguing developments to watch in coming years.

There is other unfinished business. The dismal lack of women in positions of communal leadership is one important example. “The most prominent Jewish organizations, though overwhelmingly staffed by women, are still led by men,” Shifra Bronznick reports in her essay on leadership in the 21st century. This is especially ironic given the strides in Israel, where the national cultural norms may lean toward the macho, but it hasn’t stopped women from achieving the top posts in the Knesset, the Supreme Court and the ruling political party.

Like many anthologies, this one benefits from a multitude of voices and perspectives, highlighting the capacity of Jewish culture to change, even if some of that change rests only on the margins (for now). Yet I longed for more dialogue, more analysis. The one man included in this book, Rabbi Joseph Meszler, suggests that liberal Jewish synagogues have become so dominated by women that some Reform leaders have suggested the need to tackle “male flight.” Really? What are we to make of this dramatic turnaround? Are we moving to a time when liberal Judaism will be dominated by women and more traditional Judaism will be even more of a male scene? And what of the Conservative movement, shrinking in numbers, but still, in my opinion, the best hope for melding tradition and egalitarianism. Should strengthening that movement be a feminist cause?

A celebratory collection like “New Jewish Feminism” is perhaps not the place for such debate. But I found myself drawn to the few essays written by younger Jews willing to challenge feminist orthodoxy by discussing women’s issues with a sense of irony, humor and a critical eye. Ruth Andrew Ellenson describes the flak she has received, especially from women her mother’s age, for having the chutzpah to publish a book with the title “The Modern Jewish Girl’s Guide to Guilt” (Dutton, 2005).

“If academics, activists, and rabbis who are on the leading lines of Jewish feminism want to show the importance of the cause to younger generations, there must be room for a questioning of the standards of what has been received,” Ellenson writes. “It’s not a rejection of the gains the women before us have gifted to us, but it is a re-exploration of how we will use those gains. For my generation, living with feminist privilege is a matter of course, not a cause.”

Which takes me back to the mini-rebellion at our Seder. The young women at the table do treat the gains achieved by their mothers and grandmothers as a settled part of life. They’ve seen women read Torah, prostrate themselves before the congregation on Yom Kippur, perform weddings and funerals, interpret text — and that’s just the start. Most important, our daughters see women as active players in religious, spiritual and communal life, not as the disempowered victims of the past.

Isn’t that what we strived for? These gains must be protected and replenished, of course. Just like racism won’t end with President Obama, the cause of bringing full equality and empowerment to Jewish women can’t fade because Ima’s on the bimah. But neither can we hold on to the perspectives of the past. One of the few moments in this anthology where I heard the voices of young Jewish women was in an essay titled “Koach Banot (Girl Power)” by Beth Cooper Benjamin and Jodie Gordon. The authors informally interviewed five young women over a period of time, and presented their views without really drawing any conclusions. Nonetheless, there was a distinct sense that the word “feminism” had gone out of style, and that the authors, while discomforted by that finding, recognized the possibility it engendered.

“Listening to these girls speak about feminism, we sense that this generation has created a new vocabulary for describing and understanding their identity — both Jewishly and secularly,” Benjamin and Gordon wrote.

If the conversation is going to continue, and I sure hope it does, then we all have to adapt to this new language. In my view, the emphasis of the feminism of the future has to change, to start shoring up communal vitality instead of securing individual rights. Much of the feminist gains described in this book speak to personal desires for inclusion and validation. But religion and peoplehood aren’t just about tending to our own needs; we are also meant to serve a higher being, a broader set of causes. I only hope that the enormous creativity, commitment and, indeed, courage displayed by Jewish feminists will be further directed to embrace the challenge of maintaining American Jewish culture, no matter what language or rituals we use.

As for my Seder table, well, the following year, I decided that the orange was there on flimsy grounds, but the Miriam’s cup and the tambourine stayed. I’m happy to report that no one considers them unusual anymore.

Jane Eisner is the editor of the Forward. [email protected]

The Cup of Liberation