A Portrait of the Artist as a Young Jew 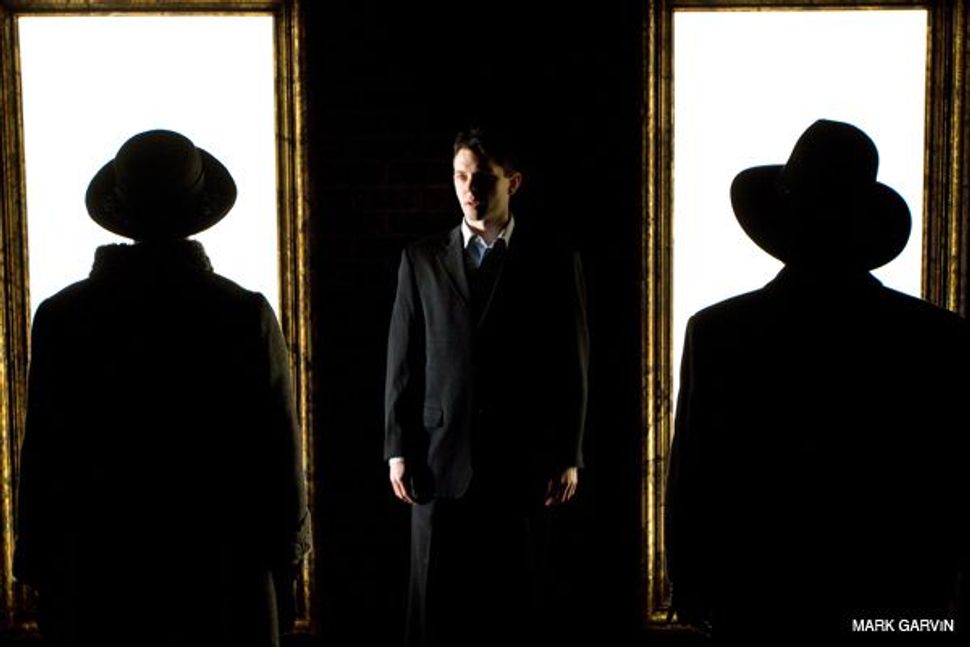 Everything is Illuminated: Brightness does not mean enlightenment for Asher.

The young man, who calls himself an artist, looks out to an audience eying him from risers laid along the floor-level stage. He speaks of his reputation without irony. He calls himself a traitor.

His name is Asher Lev, he says, introducing himself by declaiming his legacy. “I am none of those things,” he tells us. “And of course, in some ways, I am all of those things.”

The late Chaim Potok’s novel about the boy, in which no one was right and everyone was right, came out in 1972. Now, “My Name Is Asher Lev,” in its first adaptation for the stage, unfolds with the same compelling force as the book. It debuted on January 14 on a professional stage in Philadelphia, the city Potok called home from his residence in the near suburbs.

Potok’s story of a Hasidic boy caught between a solid tradition and his parents’ expectations on one hand, and a need on the other to develop his talent in ways that would challenge even the most patient rebbe, has universal appeal. It continues to be a mainstay of upper-school reading lists, and not just in predominantly Jewish neighborhoods. The announcement of a planned stage version drew immediate reaction: A dozen artistic directors of theaters ac–ross the country are expressing interest in acquiring rights to produce it.

The novel is written like a memoir. Indeed, as a youngster, Potok was interested in making art, just like Asher, and later in life he returned to his paints with gusto. Potok had put away his oils and canvases when his father told him to cut the studies he was preparing on canvas and start the studies he should be preparing for his bar mitzvah.

Not so for the character Potok created. Asher’s gift for art consumed and haunted him, and eventually set him on a tenuous course, living as a Torah Jew and making internationally received art as a man of the world. The conflict electrifies both the book and the play. Potok “was able in this book, well, in all his books… he never faced good against evil,” his widow, Adena, told an interviewer from Arden Theatre Company, which commissioned the adaptation and is producing its debut. “He faced good against another good.” Adena Potok served as artistic consultant to the production.

Aaron Posner, a founder of the 21-year-old theater company that is among Philadelphia’s main stages, began talking with Potok almost a decade ago about the possibilities of “Asher Lev” as a piece of theater. (The Bronx-born Potok, a rabbi, was 73 when he died in 2002. His fiction was widely read, and is only part of a Potok catalog that includes a history of the Jews, called “Wanderings,” and 14 volumes concerning Jewish ethics.)

Posner and Potok had collaborated on a stage adaptation of Potok’s celebrated first novel, “The Chosen,” which had already been made into a film; the stage version was a hit for the Arden in 1999, as it has been since for other theaters.

Potok himself adapted a piece of “Asher Lev” into a one-act called “The Gallery,” which played on a professional Philadelphia stage in 1990. But it included only a fraction of the story, which has such a broad sweep that it’s a challenge even for Posner, who has adapted many novels for the stage. For Posner, artistic director of Two River Theater Company in Red Bank, N.J., “Asher Lev” marks a homecoming to the Arden.

Posner’s script culls the book’s Yiddishkeit and maintains its literary qualities — especially its cadence that often becomes litany, in the form of ancient prayer; you can discern a davener in some of Asher’s narrations that provide the grout between the scenes. There’s both tension and tenderness in many moments, as in the book. For example, from his study, the rebbe gives Asher a blessing, both subtle and intriguing, prior to his bar mitzvah, and sets him on a path to rarefied artistic training. Or the moment when the young artist torments himself over the mix of Christian and personal imagery he has appropriated to show pain.

Posner, who also directs the play, cast two versatile actors — Adam Heller and Gabra Zackman — to play many roles, including Asher’s parents, and Karl Miller, 29, who has appeared off-Broadway, to play Asher. Miller’s portrayal is remarkably real: He is every frustrated kid who holds fast to his parents’ values even as he breaks out to form his own.

One of Posner’s most effective decisions is to show Asher’s art on empty canvases; we fill in the blanks with our imaginations when necessary. In the provocative gallery show that is the story’s culmination, the two most vexing paintings are shown as huge rectangles of bright white light. These blocks of illumination become a piercing silhouette as Asher’s parents stand before them and begin to fully understand their role — and the role of a wider world — in his artistic vision.

*Howard Shapiro is a theater critic for the Philadelphia Inquirer and also writes about travel. *

“My Name is Asher Lev” runs until March 15th at the Arden Theater in Philadelphia.

A Portrait of the Artist as a Young Jew