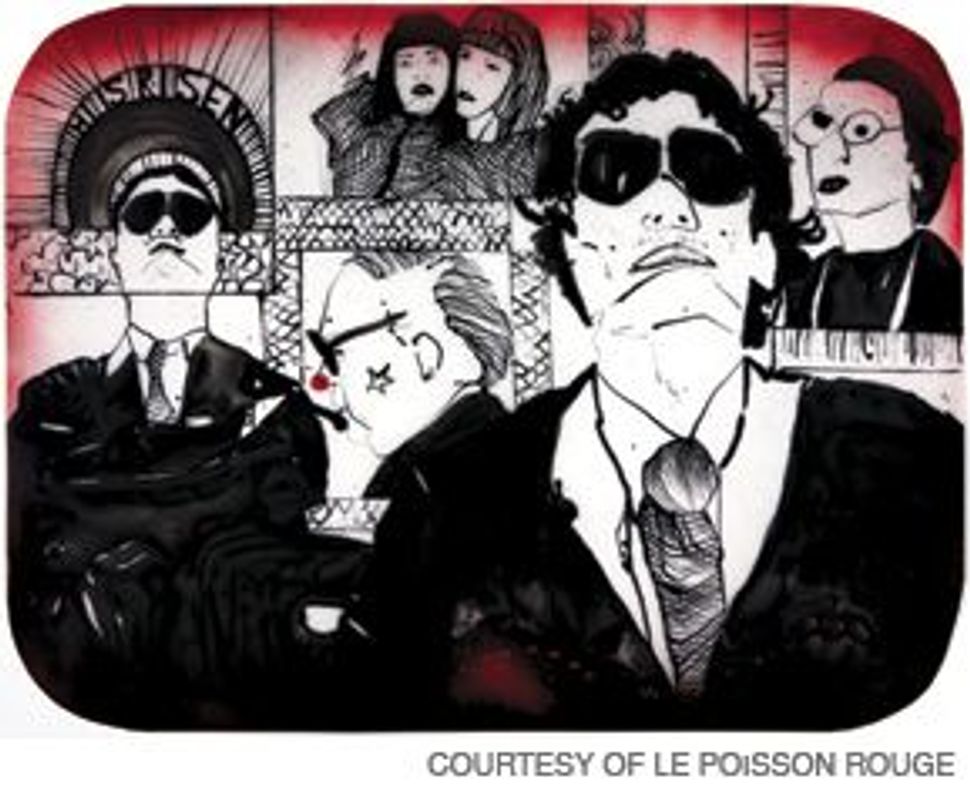 THE EYES HAVE IT: Obscured gazes hint at power struggles between viewers and the viewed in ?He Is Risen.?

The quirky New York City venue for Israeli-born artist Ofri Cnaani’s current solo show, “A Tale of Ends,” is apt. Le Poisson Rouge, a dimly lit bar, nightclub and gallery in the downtown space once occupied by the venerable Village Gate, bills itself as “serving art and alcohol.” It announces its off-kilter sensibility just inside the entrance, where a 5-foot-long tank, filled with fish swimming about, hangs askew from the ceiling, suspended by metal chains. Poisson Rogue is a place to consume (booze, food) and be consumed (by art and music), and this sense of devouring and being devoured also runs through Cnaani’s work. 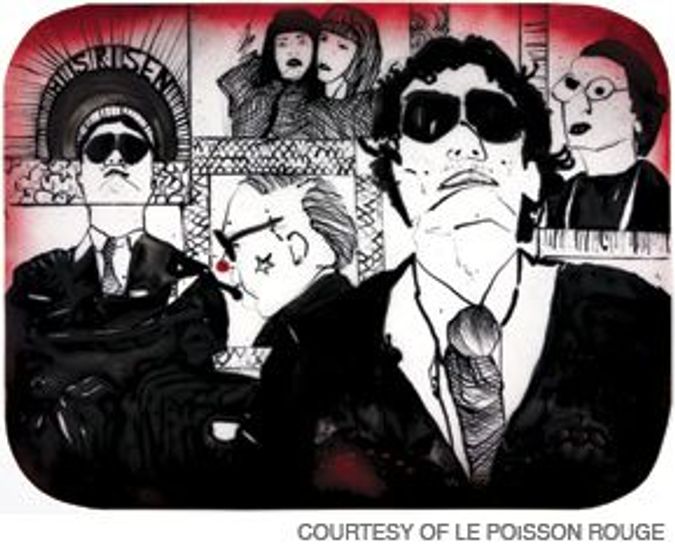 THE EYES HAVE IT: Obscured gazes hint at power struggles between viewers and the viewed in ?He Is Risen.?

“A Tale of Ends” consists of nine provocative ink-and-spray-paint drawings on Mylar, part of an exhibit called Two Dimensional Days (shown in 2007 at the Andrea Meislin Gallery). There’s a lightbox piece and a video installation, too, but the drawings form the show’s core. Themes of desire and consumption, creator and spectator, and subject and object are explored by the 33-year-old emerging artist, who uses these notions to investigate, in part, where power lies. Cnaani isn’t willing to say, perhaps because she sees power as a shifting force.

Her setting is, vaguely, the art world. But which one? The world within art, or the world surrounding art? Does power ultimately reside with the artist, the curator or the collector? Little is given away in these cryptic drawings; context is slippery. These characters, who occupy a decadent milieu, are cool, muted, detached — sometimes wearing sunglasses, as if to hide and underscore their self-awareness at being seen. As a result, the viewer is made to feel self-conscious looking at them.

In Cnaani’s work — not unlike Poisson Rouge itself — elements of cheeky humor, revelry, sensuality, decadence, mystery and cool detachment prevail. In “Young Collectors,” a nattily dressed couple stands coolly in a gallery, in front of framed portraits and landscapes on the wall. They’re observing art and looking to buy. Yet, in “End of the Night,” yearning is shown in the context of a hazy, erotic scene. A woman on the left side of the drawing is seen smoking, detached from a nearby female figure, legs entwined with a shadowy male figure, as empty wine glasses fill the foreground. Both pieces explore the act of looking. In the former, it’s an indifferent, casual endeavor, but in the latter, gazing is a voyeuristic intrusion.

Overall, the effect of Cnaani’s images is both intimate and distancing. Although meaning is ambiguous, the tension between detachment and desire has an alluring effect. The viewer is left feeling disoriented, drawn into the scene and left out of it at the same time. Crucial information about what you’re taking in is withheld. Because you’re never certain of where your focus should be, Cnaani is raising questions about attentiveness in our information-saturated culture. In her hands, even watching becomes a kind of performance, but whether it’s for the benefit of others or strictly solipsistic is unclear. Ideas blur and collide in these works, and it’s up to the viewer to assemble and interpret the detritus of what remains.

In the peculiar “Real Faces,” a masked, costumed woman is hunched forward on all fours atop a table, her hands clutching a disembodied cheetah head, as two figures stand behind her, smiling and watching. Is it a performance? Has the woman been forced to perform? There is no obvious threat of violence or aggression, but something about the animalistic scene, entertainment or not, is disturbing. It’s unclear whether the performer is an active or passive figure — whether she is forcing herself upon an audience or being made to perform for its pleasure.

Artist Chris Ofili once described his friend Peter Doig’s paintings as “the figure becoming part of the landscape and the landscape becoming part of the figure.” Cnaani’s images similarly blend (and even confuse) foreground and background, subject and object. Her figures often stand in front of framed paintings on a gallery wall, and are at the same time on display themselves, a part of what they observe. Background and figure become one.

As with Doig’s work, Cnaani’s figures become almost part of the background; perspective is confused and confusing. In “He Is Risen,” for instance, a male figure shown as a character in other drawings becomes a framed portrait on a “gallery” wall. And another man, wearing sunglasses and a suit, is shown with a horizontal line across his neck, making his face a part of a piece hanging on the wall, and his body a part of the space around him. He’s three and two dimensional at once, both person and portrait. He himself is part of the art that he observes.

Each of the 18-inch-by-24-inch Mylar images is like a haunting film still; Cnaani is obviously interested in the cinematic and theatrical. Each frame in the show is a self-contained vignette and part of a larger narrative, but the story it tells is obscured and enigmatic. Even the show’s title is open to interpretation: This story of “ends” may have to do with the cycles of celebrity and spectacle we are subjected to daily, and with one’s Warholian 15 minutes of fame coming to an end. Similarly, not least since “tails” and “ends” are both finales, the exhibit can be read as a meditation on where attention stops: the limitations of subjectivity.

Another important artist, Ed Ruscha, is a presence in Cnaani’s work. Though Ruscha hails from Los Angeles by way of Nebraska and Cnaani from New York by way of Israel, the artists share a keen interest in photography and cinema. Cnaani’s drawing “The End” seems to be a homage to Ruscha’s 1991 lithograph of the same title. A solitary, middle-aged, bespectacled man (who appears elsewhere in the show) is seen in profile, stepping out of the frame. He’s walking in front of a screen — or perhaps it’s even meant to be Ruscha’s famed artwork itself — marked “The End,” which has lettering in the exact style of Ruscha’s piece.

The image is partly obscured by the (overweight) man in front of it, but visible on the screen/picture are vertical streaks that suggest an old movie. To create this effect, Ruscha actually scratched a piece of film that was then transferred onto a light-sensitive plate. Cnaani uses ink marks for her lines, but the vintage feel is the same. The result is an exquisitely rendered piece, indicating that the show’s over, folks: The spectacle of coveting and consuming comes to its inevitable end as the man makes his exit, gaze downward. The Ruscha reference is ambiguous, but in other pieces in Cnaani’s Two Dimensional Drawings series, paintings by Klimt, Matisse and others can be seen on the “gallery” walls, suggesting that Ruscha represents another desirable object of collectors’ and viewers’ attentions, one particularly well suited to mark the close of “A Tale of Ends.”

An addendum to the show is a darkened room with black walls, just off to the side of the gallery space. A row of five black fabric chairs along the back wall provides seating for the nine-minute, 35-second showing of “Death Bed,” a two-channel video installation suggesting life and decay that is eerie and beautiful. (There’s another lovely video projection as you walk up the stairs from the gallery/bar area.) One video that has nothing do with Cnaani’s show is that of the flat-screen TV hanging above the bar, which on one occasion was displaying a basketball game. Although the sound was muted, it was a noisy, distracting presence amid the art — but maybe that was somehow the point.

“A Tale of Ends” runs until April 13 at Le Poisson Rouge Art Gallery, 158 Bleecker Street (between Thompson and Sullivan).

Carmela Ciuraru has written for the Los Angeles Times, ARTNews, and Newsday. She is the author of six poetry anthologies and lives in Brooklyn.