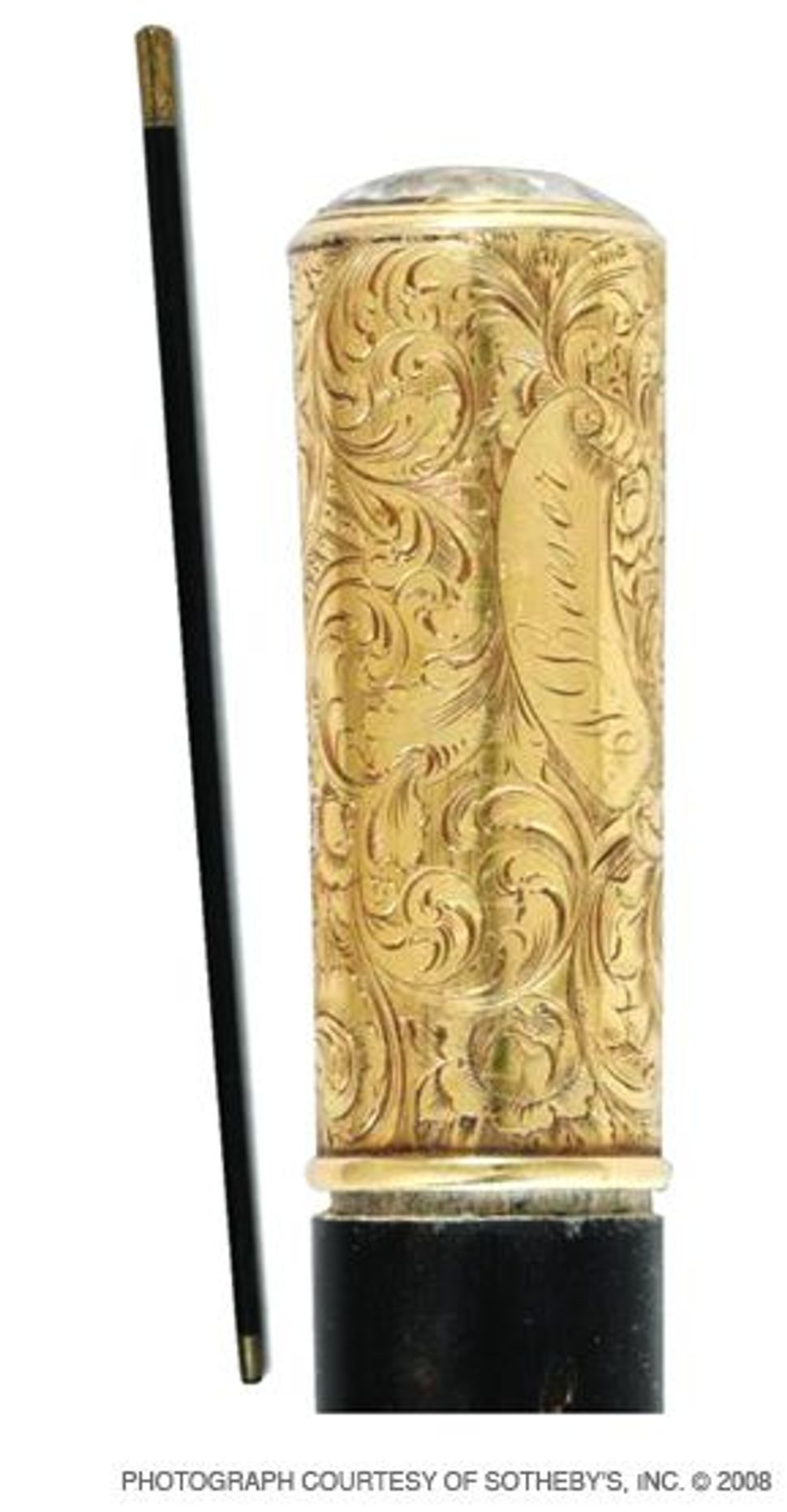 History comes in all shapes and sizes. Sometimes it takes the form of large events that lunge across the landscape, leaving everything else in their shadow. At other moments, history is more a matter of odds and ends, a salute to the power of the serendipitous. The newspapers of late have been full of the first kind, referring to war, disease and presidential politics on a daily basis. Auction houses of late have focused on the second, filling their display cases and catalogs with all manner of ephemera, from personal effects to writerly flights of fancy. 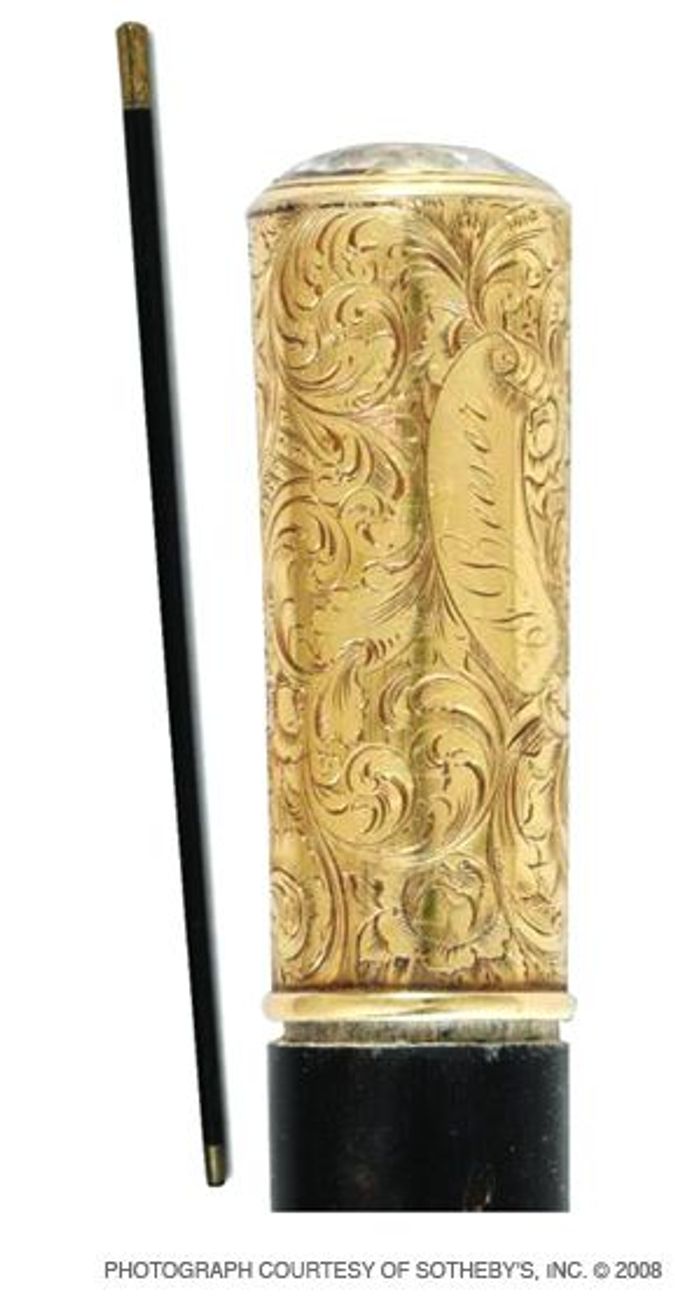 Although it may strike some as counterintuitive, we can glean an awful lot of information from the latter category of historical material, especially when it comes to the texture of daily life. Consider, for instance, Rabbi Isaac Leeser’s walking stick, which Sotheby’s just sold for the hefty price of $37,500. Though I’ve spent years studying the myriad objects, texts, institutions and personalities that define American Jewry, I had absolutely no idea that the august Philadelphia rabbi — or “reverend,” as he preferred to be called — ever owned a walking stick, much less one that might fetch thousands of dollars at auction. Then again, speaking frankly, I had never given any thought whatsoever to how Leeser, one of the most formidable American Jewish leaders of the 19th century, dressed, or how he made his way around town.

Most of what I knew of him centered on his Sisyphean efforts to fashion a singularly modern, American kind of traditional Judaism. Translating the Bible into English, publishing the monthly magazine The Occident and tending to his flock, which he periodically castigated for its “accursed love of money, of pleasure, and of power,” Leeser didn’t seem to be the sort of man inclined to brandish a gold-topped, ebony walking stick. Such expensive things, one would think, would be the property of high-living fops and dandies, not of unremittingly fierce, uncompromising guardians of Jewish tradition.

Leeser’s walking stick, then, isn’t just a curiosity of antebellum America or a treat for collectors of Americana. It’s also a bit of American Jewish history — an odd bit, to be sure, but a bit of history all the same. In the end, knowing that Leeser sported a gold-topped walking stick doesn’t change our estimation of the man or of the circumstances in which he found himself. But it sure goes a long way toward humanizing the Philadelphia rabbi, revealing him to be a real person with an eye for some of the delights of this world, a person with a stick, rather than a stick figure, a remote symbol of rectitude given to dour pronouncements about this and that.

Much the same can be said of a number of other items of American Jewish provenance that landed on the auction block over the course of the past few months. Kestenbaum & Company, for instance, recently featured a dazzling range of printed matter that points up the richness of our cultural patrimony. I wouldn’t exactly classify most of these items as enduring literary classics or as major cultural statements — far from it — but then, that wasn’t their function. These are occasional pieces in the best sense of the word, documents that show the imagination at work or address a particular set of contingent concerns. One such text, bearing an inordinately long title, is “An Essay on the Propagation of the Gospel; In Which There Are Numerous Facts and Arguments Adduced To Prove That Many of the Indians in America Are Descended From the Ten Tribes,” written by attorney Charles Crawford. Among other things, this 1801 text, published in Philadelphia, inventively drew parallels between the rituals of Native Americans and those of American Jews, in an attempt to underscore the kinship between the two peoples.

Another work, only slightly less fanciful, “Drei Jahre in Amerika” (1862), was the handiwork of avid traveler Israel Joseph Benjamin or, as he liked to style himself in homage to his 12th-century predecessor, “Benjamin Tudela II.” It provided a detailed account of Jewish life in the faraway Northwest of the United States, slaking the curiosity of those in the Old World about their coreligionists of the New. Elsewhere, “The Hebrew Reader: An Easy Method for the Instruction of Jewish Children” (1872), made clear that the youngest of American Jews — then, as now — had trouble mastering the Hebrew alphabet and needed encouragement to persevere in their studies.

And then there’s Joshua Siegel’s “Eiruv ve-Hotza’ah,” which reflected the efforts of observant Jews in New York of the early 1900s to erect an eiruv, a space specially demarcated so that those who keep the Sabbath might carry things within its parameters on that day. Siegel’s proposal that the East River and the Hudson River, along with the Third Avenue “El,” serve as the boundaries of this device stirred up a spot of controversy at the time. That even today, more than a century later, the legitimacy of the Manhattan eiruv is not universally accepted goes to show how some of the same issues that roiled earlier generations also roil ours. Siegel’s fascinating text sheds light on the relationship between Jewish law and the modern, urban landscape of 20th-century America. And in the course of things, it puts an altogether different twist on the regnant notion that the New World was a “treyfe medina,” a country inhospitable to people of faith.

Taken together, this collection of texts, along with Leeser’s walking stick, constitutes the stuff of history, bringing to life American Jewry’s crochets and controversies, as well as the people who generated them. A far cry from what we learned about in school, it renders the past up close and personal and makes just a little more room for our predecessors within the orbit of our contemporary imaginations.