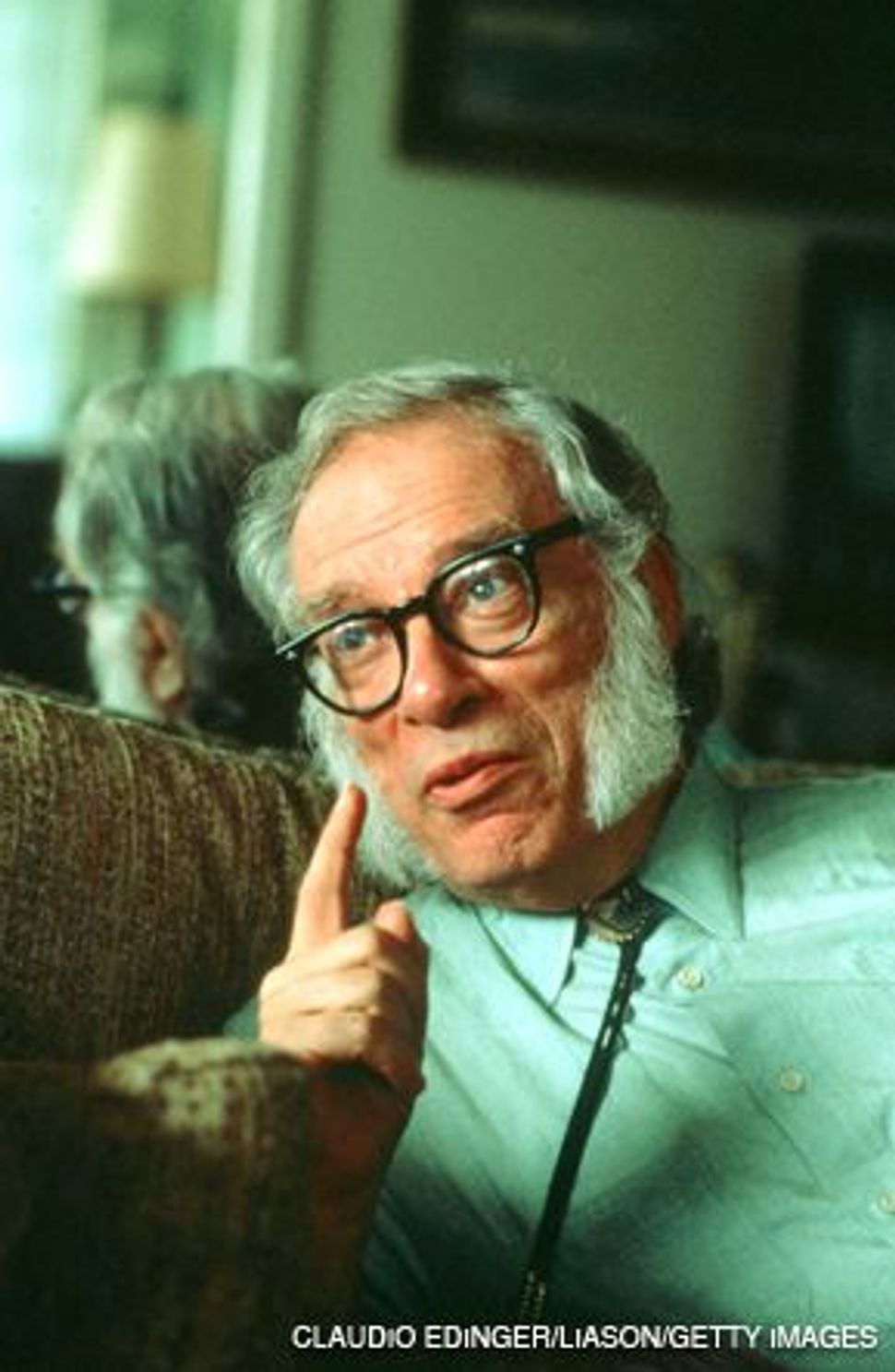 I, ASIMOV: Ol? Mutton Chops is back.

Between 1950 and 1969, Isaac Asimov became a publishing industry unto himself. From “Asimov’s Annotated Gilbert and Sullivan,” to “Isaac Asimov’s Book of Facts” and “Isaac Asimov’s Treasury of Humor,” he was celebrated as much for his success and prolificity as for his wit, curiosity and erudition. Photographers asked him to pose with his many books, and he obliged, wearing a grin both proud and credulous. On the cover of “Opus 100,” published in 1969 (Houghton Mifflin), he is pictured sitting at a desk between two endless stacks of books, sans notorious mutton chops, dressed in a suit and tie on the occasion of his 100th book in two decades. When Asimov appeared on “The David Frost Show,” the host asked if he believed in God. “I haven’t given it much thought,” he replied. But by then, “Dr. Asimov” had become a household name. 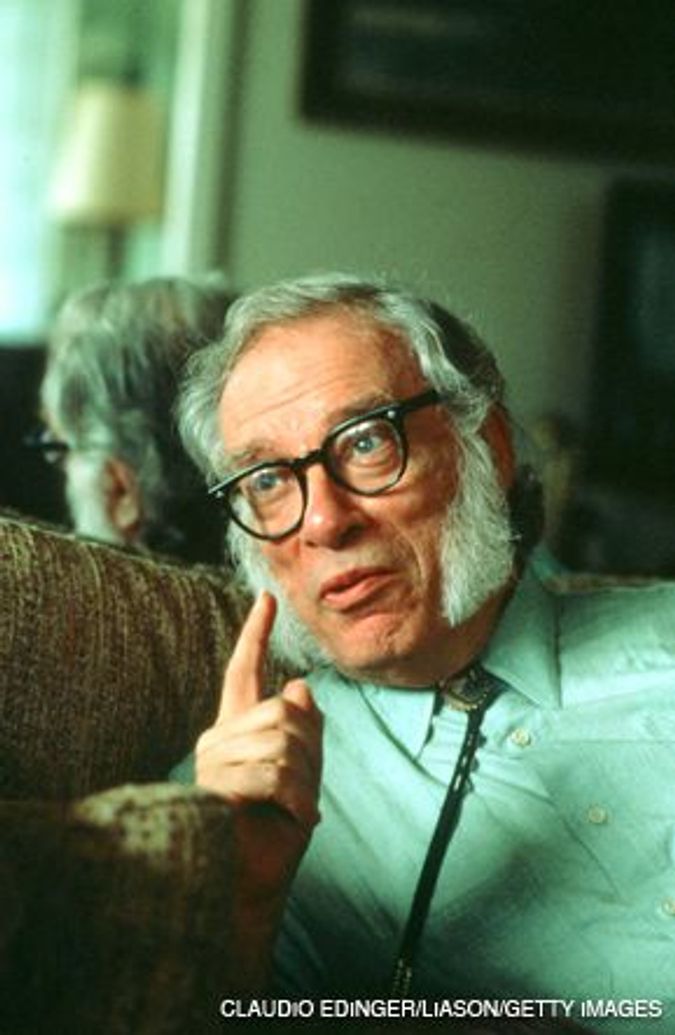 I, ASIMOV: Ol? Mutton Chops is back.

Next year will mark the 60th anniversary of the publication of the first book in that list of 100: Asimov’s first novel, “Pebble in the Sky,” which introduced America to the Galactic Empire — his de facto science-fictional universe — and to a not yet so self-assured 29-year-old Asimov, with the words: “Two minutes before he disappeared forever from the face of the Earth he knew, Joseph Schwartz strolled along the pleasant streets of suburban Chicago quoting Browning to himself.” Schwartz, we are told, is a retired tailor. The Robert Browning poem he’s reciting happens to be “Rabbi Ben Ezra.” And in an instant, Schwartz finds himself again an immigrant: this time, in an unknown future, on an earth too radioactive to sustain life beyond the age of 60, the age “Pebble” finds itself today.

Born near Smolensk, in Petrovichi, during the first years of the Soviet Union, Asimov’s first language was Yiddish, his eyes recessively blue and his Judaism casually latent: “… it may well be that many East European Jews are descended from Khazars and the people they ruled,” he later wrote, as a confirmed rationalist. “I may be one of them. Who knows? And who cares?” Upon arriving in New York in 1922, the young, preschool-age Asimov quickly taught himself English. Since his parents spoke only Russian and Yiddish, he began a course of Anglophile self-education at public libraries, first reading dictionaries, then the Greek myths and British classics.

The young George Gershwin converted to ragtime partly to escape the street, and Asimov converted himself to science to achieve a similar effect. This he did via Columbia University (his doctoral thesis was on “The Kinetics of the Reaction Inactivation of Tyrosinase During Its Catalysis of the Aerobic Oxidation of Catechol,” the first and worst-selling of his books) and one of several family candy stores on Decatur Street in Brooklyn. There he was first introduced to science fiction through such pulp magazines as Amazing Stories and Astounding Science Fiction — stories he would later defend on the grounds that “the age of the pulp magazine was the last in which youngsters, to get their primitive material, were forced to be literate.”

Intuitively threatened by looking’s supremacy over reading, he went on to publish fiction and nonfiction at a vengeful rate, as if to stanch the attrition: His 200th book, “Opus 200,” was published in 1979, followed by “Opus 300” in 1984. Meanwhile, he maintained a life diametrically opposed to that of a typical writer, eventually making money by publishing books and working as a professional chemist by day, simply out of curiosity and passion. At the Naval Air Experimental Station in Philadelphia, probably the first and last time three sci-fi writers — Asimov, Robert Heinlein, and L. Sprague de Camp, author of “A Gun for Dinosaur” — were ever in charge of wartime weapons research, Asimov was, in fact, more inspired by theoretical premises than the performance of seam-sealing compounds: What if it were humans who had to come to the aid of foreign intelligences? (“Blind Alley”) What if Truman dropped the bomb? (“Pebble in the Sky”) Or what if a computer played the role of God? (“The Last Question”)

More Lithuanian than Polish — that is, more Misnaged than Hasid — science fiction writers rule a universe of which they are the sole intelligent designers, inscribing the Law on a parchment of space-time continuum composed of bizarre coincidences and fantastic exceptions derived entirely from our own planet and its latter day. The rules they set spring up like traps, inevitably ensnaring the 62-year-old retired tailors of the world in the nightmare of a life that ends at 60, and a fate that, like the Great Depression Asimov survived, happens to be both terrible and explicable. (It is said that, following Tsar Nicholas’s expulsion of the Jews from Russia, a rich landlord in Asimov’s birthplace conveniently shifted the border to the east of town from the west, therein annexing its residents, geographically, to the Pale of Settlement, while remaining, physically, within the margins of crown lands.)

Galactic Talmudists, it is the writers — not science — who rule science fiction, just as it’s the competing voices of commentators that create the echo of the Talmud: When Asimov coined the term “robotics,” he also enumerated its three standard laws, reminiscent of Rabbi Hillel and the exegetic penchant for threes: “A robot may not injure a human being or, through inaction, allow a human being to come to harm. A robot must obey the orders given it by human beings except where such orders would conflict with the First Law. A robot must protect its own existence as long as such protection does not conflict with the First or Second Laws.” Perhaps this preoccupation with the terrestrial and the worldly is why the genre turns so readily to social satire and dystopias — places that must exist, according to etymology and various destinies.

Asimov’s most popular sci-fi series, “Foundation,” for example, was inspired by the gloomy fate of Europe in 1941: Thinking of Edward Gibbon’s multivolume “History of the Decline and Fall of the Roman Empire,” Asimov began his so-called “history of the future” in novel form, proposing a foundation at the borders of a galaxy where scientist-saviors convene to keep the Galactic Empire alive by compiling an encyclopedia of human knowledge to combat the encroachment of “feudalism,” or fascism.

The story “Jokester,” from Asimov’s later collection, “Earth Is Room Enough,” asks the seemingly innocent question, “Where do jokes come from?” And concludes, with sinister implications for human laughter, that the prototypes of our humor are of “extraterrestrial origin” — a laboratory experiment for alien psychologists. Thus the joke is on us: There will be no more jokes now. “The gift of humor is gone,” Trask said drearily. “No man will ever laugh again.”

Though Asimov’s dialogue was openly stilted and his style consciously antiquated from the first to the last bookend of his long career, and though he somehow always managed to make Jewish names sound futuristic, or merely Israeli — Abram Trask, Pola Shekt, Bel Arvardan — his presence can still be felt in the sympathy accorded Multivac, the story’s supercomputer and lonely-intelligent bearer of bad news (Asimov died of AIDS, which he contracted from a blood transfusion, in 1992). In the final sentence we can sense an allusion to the mysterious popularity of the author’s science, too: “And they remained there, staring, feeling the world shrink down to the dimensions of an experimental rat cage — with the maze removed and something, something about to be put in its place.”