You Shoot, He Scores: The Kibbutz King of Komposers 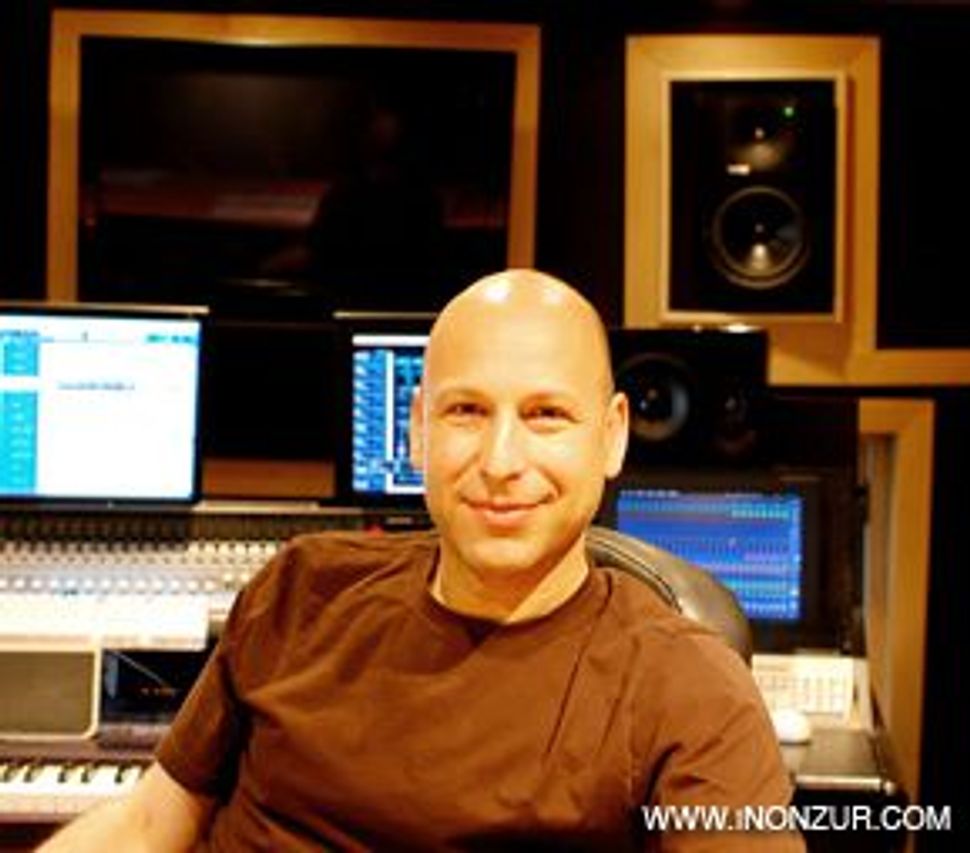 SEAT OF POWER: Inon Zur in his recording and mixing studio in Los Angeles.

“My grandparents drained swamps and established Kibbutz Merchavia in northern Israel. My father, an actor/director, and my mother, a teacher/poet, lived on it and raised three sons there… They divorced when I was 20. I moved to Tel Aviv to study at the Music Academy and was advised by my guru, ‘There’s nothing more for you here, go to America; that’s where the opportunity is.’”

Inon Zur’s odyssey is a bittersweet post-Zionist metaphor and a Horatio Alger success story. He’s an Israeli living the American dream: at the top of his profession, but in Galut.

Working from his well-appointed recording and mixing studio in Los Angeles, Zur creates cutting-edge symphonic scores for electronic games. These games are now a multibillion-dollar industry, and Zur is one of the first to bring complex and compelling musical tension to the visual action. 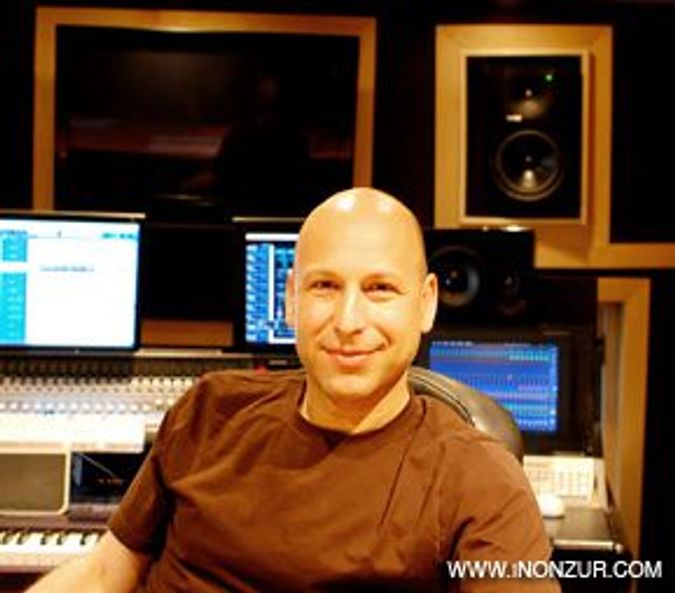 SEAT OF POWER: Inon Zur in his recording and mixing studio in Los Angeles.

Today, at 43, Zur is a charming, creatively productive, happy man living with his wife, Osnat, and their three sons in a beautiful, gated estate in the San Fernando Valley. Once a secularist who never saw the inside of a synagogue, he now has a family that keeps a kosher home, celebrates the Sabbath and festivals, and belongs to Valley Beth Shalom Synagogue, where the Zurs recently celebrated the bar mitzvah of their eldest son, Jonathan.

The 8-year-old Sabra who fell in love with the piano and the French horn while accompanying the Kibbutz choir was later inspired to study composition with composer Theodore Holdheim in Ein Harod, but didn’t enjoy advanced work at the Tel Aviv Academy of Music: “They were arrogant and taught too abstractly. I couldn’t see the purpose to their approach. They were just a bunch of Yekkes [German Jews] teaching a kind of music you were supposed to admire but not feel. It didn’t speak to me.”

After spending four years in the tank division of the Israel Defense Forces, marrying Osnat and freelancing in Tel Aviv, Zur still did not seem to realize the talent he knew he had. It was then that Jaffa accordionist Tuval Patir (Zur’s guru), sharing his frustration, encouraged Zur to make the break and immigrate to the United States.

In 1990, Zur arrived in Los Angeles. While gigging around town as a jazz pianist, he enrolled at the Dick Grove School of Music and found the hands-on, pragmatic approach that he yearned for. There he admired Herbie Hancock’s pianism and learned the nuances of Count Basie’s big band voicings. After completing his career preparation by studying film scoring at University of California, Los Angeles, he began to accompany services at Valley Beth Shalom, where he learned Torah from Rabbi Ed Feinstein.

A congregant recognizing his musical acumen recommended him for work in Haim Saban’s “Power Rangers” stable of young, underpaid Israeli and American composers. Writing for hire for a basic hourly wage, often from 6:30 a.m. to 6 p.m., without any further royalties, Zur soon learned the craft of Saban’s eager young music staff, and the business end, while providing music for more than 300 children’s TV programs, including “Digimon” and “Escaflowne.”

Seven years later, he reluctantly moved into the burgeoning but musically unsophisticated arena of video games, composing music for “Klingon Academy” (Zur was the first composer to include choral backgrounds in his game scores). Since then, he has gone on to achieve a glowing reputation as a game composer with many credits, including “Crysis,” “EverQuest” and “Prince of Persia.” While readers older than 35 may not recognize these titles, the texting generation knows them, loves them and, above all, buys them.

His main theme for “Men of Valor” was honored with the Game Audio Network Guild Award for best original instrumental at the Game Developers Conference, and his recent score for “Fallout 3” was just nominated for the Spike TV Video Game Awards — the Oscar of its genre.

The phenomenal rise of video and online games worldwide parallels Zur’s own advancement in the industry. ABI Research estimates that the overall game hardware, software and services market will grow to $66 billion by 2011. Game music is the hottest commodity in media music. The size of symphonic orchestras and compositional fees once reserved for major motion pictures is now budgeted for scoring games.  Price tags for original scores reach well into six figures.

In addition to general dramatic musical skills, the musical technique for game scoring is specific to the genre, requiring an extensive understanding of both electric and acoustic musical idioms — a comprehensive mastery that Zur has demonstrated repeatedly in a span of slightly less than a dozen years. Though he came from meager beginnings, he now conducts symphonic recordings of his elaborate scores with the Hollywood Studio Symphony Orchestra and the Seattle Symphony Orchestra.

Simon Landry, music supervisor of the Montreal office of Ubisoft Entertainment, the company that developed the “Prince of Persia” games, offers high praise: “Inon’s music brings together a video game’s perspective, tragedy, humor, violent confrontations, romance and moral dilemmas.” Bob Rice of the game composer agency Four Bars Intertainment adds: “Even when Inon’s music is not sounding, because of his strong melodies, you can still ‘hear’ his music playing in your mind.”

If this acclaim were the extent of his odyssey, Zur certainly would have arrived. He lives well, is being offered first-rate assignments and patiently waits for the games’ visuals to grow as sophisticated as his music. Zur, whose name means “rock” or “foundation,” still asks himself where his true foundations lie: In Israel? In America? Or is he a neo-citizen of the 21st-century world?

“I’m so grateful for all that this country has given to me and my family,” Zur said. “I am a proud American citizen, but I’m an Israeli American. What Yiddishkeit is for you, Ahavat Yisrael [love of Israel] is for my family and me. Israel will always be my home. When I play basketball, I play with my Israeli buddies. I hire talented young Israeli musicians and refer them for work. We eat Israeli cuisine and speak Hebrew in our home.”

He added: “I wish I could compose and create the way I do here in *Ha’aretz *[Israel], but I cannot; the business is here. What can I do? I hope to return one day and maybe retire in Israel. I don’t plan too much. I’m a pragmatist who now understands that life takes you to places you never imagined.”

Michael Isaacson is a composer, conductor, lecturer and educator working in Los Angeles. He blogs at michaelisaacson.com.

You Shoot, He Scores: The Kibbutz King of Komposers