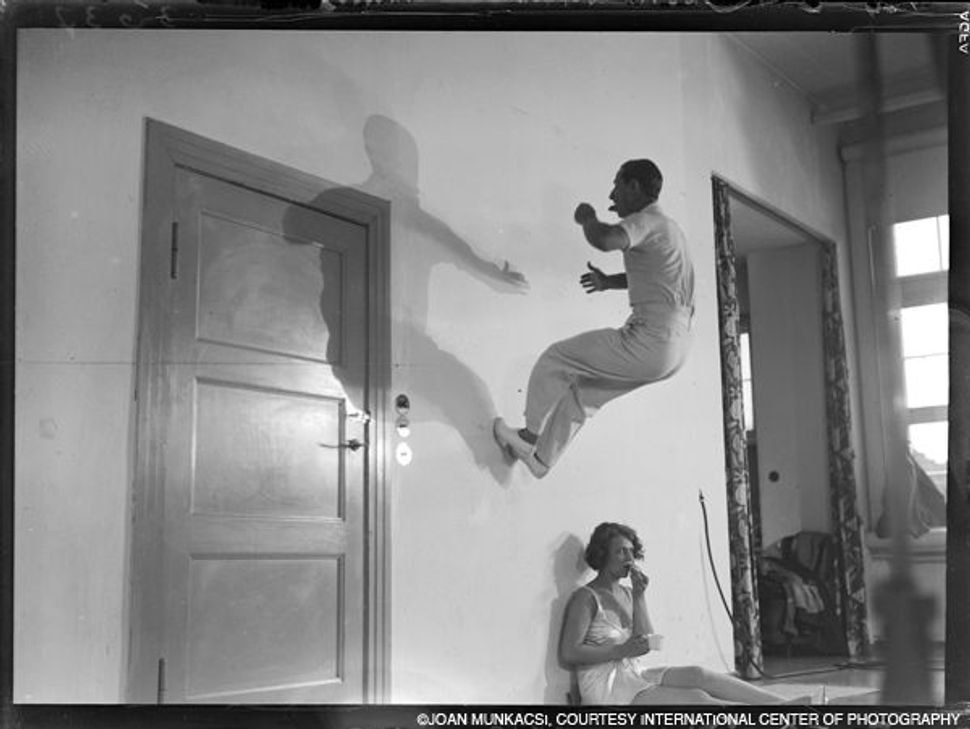 To see him roaming the halls of Harper’s Bazaar in the early 1960s, poor and desperate for commissions, it must have been hard to believe that only a few decades earlier, Martin Munkacsi was one of the world’s highest-paid photographers.

During a 2007 retrospective of his work, shown in New York at the International Center of Photography, curators and family lamented the loss of Munkacsi’s archives, which disappeared after his death in 1963. Munkacsi produced revolutionary fashion and photojournalistic images for 40 years, but only 300 or so of the Hungarian’s prints, painstakingly gathered, had apparently survived.

So, Munkacsi’s Lost Archive, showing at the ICP through May 3, is an exhibition lifted straight from the catalog of a curatorial fairy tale.

As legend has it, Brian Wallis, deputy director of exhibitions and chief curator, was doing some Internet strolling when he found the entire collection listed for sale on eBay for $1 million.

“I talked to the guy. I said, I know what they are; I’m coming out to you now!” Wallis said at the exhibition preview in January, smiling giddily at the memory. He leaped into his station wagon and headed to Connecticut, where he found dusty stacks of small cardboard boxes, each holding about 40 glass plates. All together, they weighed more than 300 pounds.

How the negatives came to be stashed in Connecticut for 20 years, and exactly how much the ICP, with the help of Munkacsi’s daughter Joan, paid to “repatriate” them, is a stubborn mystery, (ICP insists it paid “far less than the asking price”). But the negatives’ impact on the previously low profile of Munkacsi — who influenced the work of Henri Cartier-Bresson and Richard Avedon, but faded into obscurity and died in poverty — is immense.

Born Marton Mermelstein in Hungary in 1896 (his father, Lipot Mermelstein, changed the family’s surname to counter the occasional antisemitic outbreaks), Munkacsi had his first successes as a writer and sports journalist at several major newspapers in Budapest and Berlin. His sports photos resonate with an enthusiasm for the subject that lasted all his life (he died watching a soccer game), but they are also meticulously composed — to the extent that they appear stylized even when taken directly from live-action events.

Work and travel across Europe and Africa enhanced his reputation, and as a star of the magazine Berliner Illustrierte Zeitung, he photographed the “Day of Potsdam,” when Hitler consolidated power in 1933. Soon after, when the publication was Aryanized, the Jewish Munkacsi immigrated to America.

There he was picked up and later contracted by Harper’s Bazaar*, *where his first assignment was a bathing suit reshoot with socialite model Lucile Brokaw. Munkacsi headed to the beach on Long Island and had Brokaw run toward the camera, cape flying in the wind — a classic example of Munkacsi’s knack for photographing an everyday location that, by studied placement of subject and angle, became a new stage.

Plunging into fashion from sports, Munkacsi’s theme may have changed, but the style did not. If anything, it sharpened. Never one to shy away from posing his subjects, Munkacsi now wielded a greater power over them than ever before. He infused fashion photographs with the action of a soccer game, and the result was an innovative jolt to fashion photography — not least because, as a 2007 New York Times profile pointed out, respectable magazines didn’t show models with their knees apart.

The dynamism that energizes Munkacsi’s work is particularly notable in comparison with the exhibit currently showing in the room beside his at the ICP: a retrospective of Conde Nast’s chief photographer, Edward Steichen (Edward Steichen: In High Fashion, The Conde Nast Years, 1923–1937).  Steichen’s classic photos of Hollywood greats are languorous: Gary Cooper still and smoldering at the camera; conductor and composer Werner Janssen, the fingers of his left hand spread across the arm of a chair, in subtle nod to his profession. Munkacsi also shot Hollywood, but his framing is far more casual: Carole Lombard crouches in tennis whites on the court, lighting a cigarette. Next to this, Steichen’s work appears static.

Munkacsi’s work should come with sound effects: the roar and spittle of a crowd packed around a boxing ring; the throttle of an engine to accompany the series of eight photos of a woman flying into the wind in a Rumble seat. His subjects are often off the ground entirely, as in the memorable “Tibor von Halmay and Vera Mahlke” (1931), where the dancer bounces off the wall above his partner’s head. It was Munkacsi’s “Boys Running Into the Surf at Lake Tanganyika” (1930), a shot of three naked African boys on a beach — muscles tight in motion, legs kicking up the sand — that Cartier-Bresson insisted had convinced him of the power of photography. He reportedly kept a copy of the photo above his desk all his life.

For Lost Archive, modern gelatin silver prints have been developed from the original glass-plate negatives, and the few dozen on display are really just a taster; the curators are still working through thousands of negatives. Ultimately, the value of the exhibit is not for the new shots of old images, but for how the exhibit illustrates the process that made these images in the first place.

“The photograph you see signed with my own name is sometimes only a fraction of the original photograph,” Munkacsi wrote for a 1935 Harper’*s *article about his technique. And Lost Archive does a good job of illustrating this. “The Fight Between Szabr and Browning, ca. 1934,” one of Munkacsi’s boxing photos from Berlin, hangs twice on the wall: a print of the original negative next to a reproduction of the published image. The first is a wide, flat landscape in comparison with the second: a cropped and expanded image of two boxers hunched on top of each other, heaving at the borders of the frame.

Munkacsi projected an untrained, un-stylized self-image, stating in the same Harper’s article, “My trick consists [of] discarding all tricks.” His cropping technique reversed, however, reveals the planning that went into seemingly spontaneous shots. The diaphanous picture of a woman in white, silks falling around her, also contains the lace-up brogues and heavy skirt of a faceless woman letting go of the cloth to set it aflutter. For a portfolio of airborne people, after all, the people need a way to get airborne.

In a glass-covered nook in the wall next to the photographs are dozens of cardboard boxes. Scrawled on the side of each, in dark pen, are labels variously reading “Pan-American Clippers,” “Katharine Hepburn and Sisters,” and “Hawaiian Pineapple Industry.” For Munkacsi’s small fan base, mostly industry, the exhibition is like finding another layer of chocolates in the box; for the many more who’ve never heard of Munkacsi, it is a sweet new discovery, with boxes and boxes to come.

“Munkacsi’s Lost Archive” runs until May 3rd at the International Center of Photography in New York.

Sarah Kessler is an Anglo-American journalist working in New York. She can be reached at sarah.g.kessler@gmail.com.