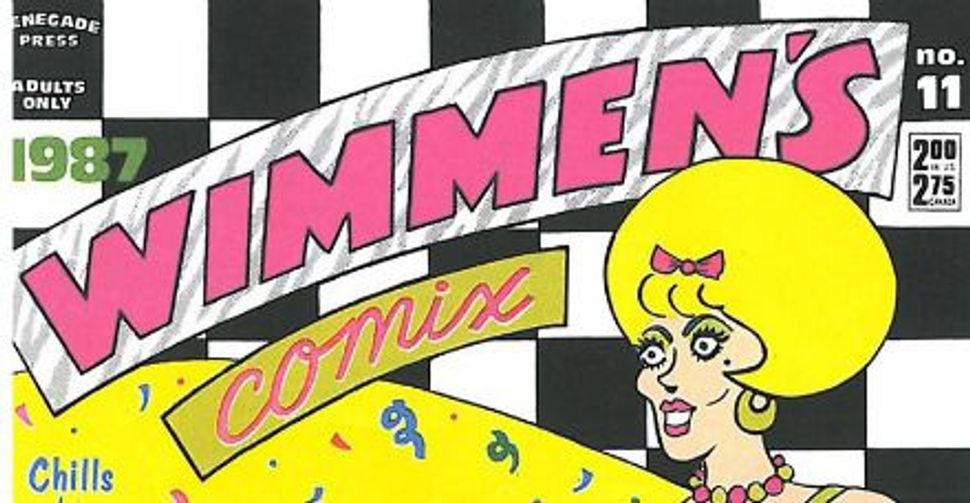 Pioneer of women’s comics Diane Noomin talks to Michael Kaminer about Wimmen’s Comix, Twisted Sister and her new book, “Glitz-2-Go.” The many and varied adventures of Didi Glitz — the book’s central character and Noomin’s comic alter ego of several decades — both delight and instruct.

Noomin uses Didi to combine the personal and the public in a character whose gestures are flamboyantly larger than life.

In one of the longer pieces of the early Didi comics, from Wimmen’s Comix #4, Didi discovers she’s pregnant from a butcher in Red Hook. Since he is married to someone else, she is on her own and decides to rob a bank. Adventures ensue!

By 1987, Noomin had been away from Wimmen’s Commix for a while. Issue 11 had a new editor — the talented Dori Seda — and she wanted someone new to do the cover. Noomin had never been an editor or had ever done a cover, but fashion was right up Didi’s (and therefore Noomin’s) street.

“Baby Talk: A Tale of 3 4 Miscarriages” — this compelling piece about the emotional sledgehammer of miscarriages is included in the Graphic Details exhibition. The drawings engage in Didi’s particular way with the deep, true tragedy of the event and the trauma of the event for Noomin herself is reflected in the dialogue between Noomin and Didi which ends with Didi literally dragging Noomin out of the comic.