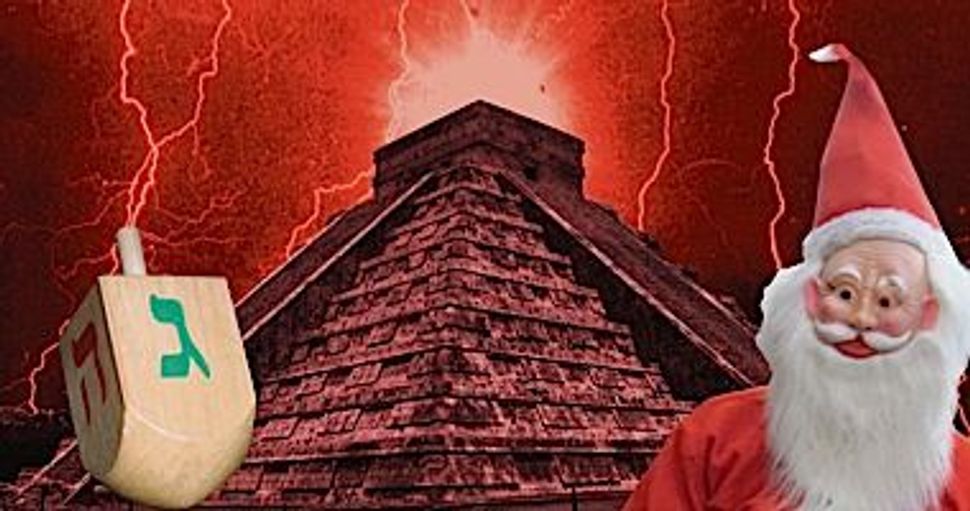 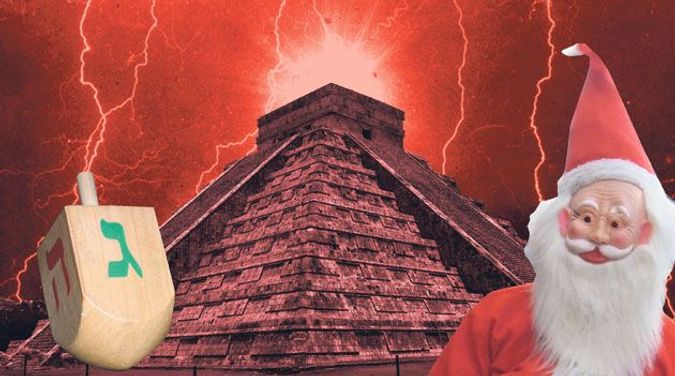 Holiday Mashup!: It?s so hard for the little ones to understand how the holiday season can include dreidls, Santa and the fulminating epicenter of universal destruction. Image by image courtesy of Yaluk the lightning god and mayan pantheon pr

If you’re a Jewish parent like me, you always dread December. There’s the relentless onslaught of Christmas carols and decorations. The perpetual question of, “Do I try to compete and distort Hanukkah, or honor the holiday but nonpluss my kids?” And, worst of all for a Jew, there’s all that wintertime indoor-heat chafing.

But this year brings an added wrinkle: The Mayan Calendar’s prediction that December 21, 2012, will be the end of the world. And if you think Jews aren’t taking it seriously, why is 8 Tevet 5773 the last date listed on my “Ungerman Brothers Funeral Home” fridge magnet calendar?

For a Jewish parent, there’s just no easy answer to why a bunch of long-dead people who once lived near the Club Med we once vacationed at with Aunt Gertie say we’re all going to die. This despite the valiant efforts of a recent slew of PJ Library titles: “The Giant Fiery Dreidel From Space,” “Soon We’ll All Be Tsimmes,” “Sammy the Spider Is Wiped Out Instantaneously, Along With All Life on Earth.”

However, because I’m the type of Jewish parent you all hate — with boundless time and energy and a complete abnegation of self — I’m turning the apocalypse into an “apocalyptunity” for my kids.

It starts with Jewish/End-Time art projects. We’re decorating our family’s fallout shelter with pictures of all the things we’ll be glad no longer to have to deal with: Mahmoud Ahmadinejad; next year’s day school invoice; those last two hours of Yom Kippur, where the head of everyone around you looks like a Pepperidge Farm Mint Milano.

Our global annihilation is also fertile soil for instilling Jewish pride — mostly through the elimination of Jewish shame. No more exhausting Hebrew school carpool conversations with the kids about why we Jews are different — now we’re getting the same treatment as everyone else! Even better, it’s the first global calamity no one can blame on Israel.

Speaking of which, now there’s really never been a better time to visit Israel with the family. What’s the point of saying “It’s a dangerous time” when that’s true of the entire year 2012? And if you thought Birthright buses were filled with teens hooking up like there’s no tomorrow before…

Finally, di groyse oysreynikung, the great cleanout, is the perfect time to make peace with our limitations as Jewish parents. No more worries that every second we let them watch “Spongebob” is dropping them down the acceptance list to Princeton. No more anxiety that all our parenting flaws will one day be portrayed in an angry novel, or haunting fears that our parents’ questions of, “Oh, you’re letting her eat that?” are actually legitimate. No more judgment that we don’t “walk the talk” Jewishly enough for our kids.

Because let’s face it: Come December 21, we’re going to all keep Shabbat like nobody’s business.