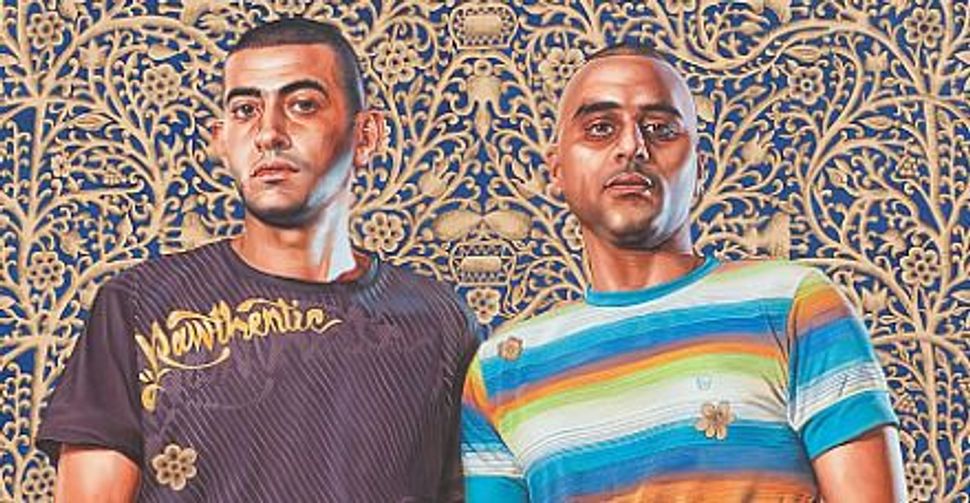 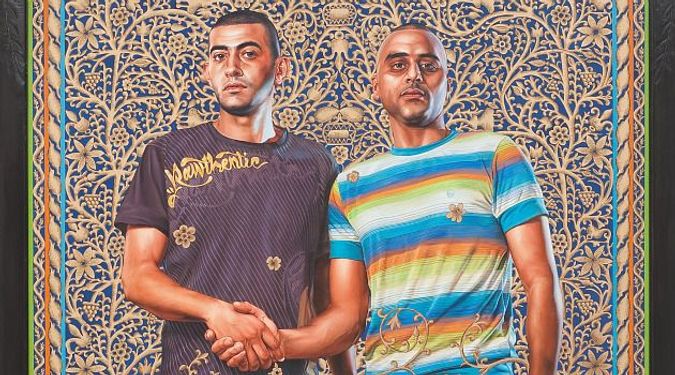 Subject Matter: Kehinde Wiley traveled to Israel to find and photograph his models, whose ethnicities range from Ethiopian to Arab Israeli to Ashkenazi. This may be the first time Wiley has painted a white person. Image by kehinde wiley

Most articles about the artist Kehinde Wiley begin with a line recounting his accomplishments — more than 20 solo shows in galleries and museums around the world, studios in three cities, work that sells for as much as $250,000 — followed by a sly mention of how young he is (35). Yes, Wiley is impressive. Someone set a stone rolling in the art world a decade ago, and now his résumé takes up seven pages of the catalog for his latest exhibition, “The World Stage: Israel,” which opened on March 9 at the Jewish Museum in New York.

Wiley deserves attention. His paintings of young, urban black men in the poses, and sometimes trappings, of famous European history paintings boldly challenge the art historical canon. When he replaced Jacques-Louis David’s famous Napoleon atop a rearing horse with a man in a bandana, camouflage and Timberlands, the largely white American high-culture crowd took notice. His paintings’ loud, decorative backgrounds, which sneak forward onto their subjects like vines sprung to life, cleverly complicate the dynamics of the traditional picture plane.

But the question stands: Does Wiley deserve so much attention? The Jewish Museum’s curators were right in thinking that his latest series would be perfect for their institution: a hip, young black artist painting portraits of Israelis is difficult to pass up. It’s worth noting, though, that this series came, en masse, from Wiley’s Los Angeles gallery, Roberts & Tilton, where it was on view last spring. Roberts & Tilton published the catalog being used for the museum show. The Jewish Museum is hardly the first to tread this path, but there’s still something disconcerting about vines of the commercial art world creeping into museum galleries like this.

For the current series, Wiley traveled to Israel to find and photograph his models, young men he met in the streets and nightclubs, whose ethnicities range from Ethiopian- or Arab Israeli to Ashkenazi (this may be the first time Wiley has painted a white person). The works are actually part of a larger project called “The World Stage,” for which he visits countries he identifies as “points of anxiety and curiosity and production,” among them India, Nigeria and Brazil. As for Israel, he wanted to “go beyond the media stereotypes about national identity,” he told the Los Angeles Times. “What does an Israeli even look like?”

It’s a worthwhile question, though similar to one long asked by Jewish artists, most notably in a standing display exploring Jewish identity at Beit Hatfutsot, the Museum of the Jewish People. With these portraits, Wiley begins his response to the question. Although they don’t correspond to specific historical artworks, the paintings do conform to the basic rules of Wiley: The subjects wear street clothes and strike strong, confident poses, usually staring directly at the viewer, while colorful backgrounds of plants, tendrils and animals swirl around and over them.

The backgrounds are based on patterns from Arab and Israeli textiles and paper cuts, including a beautiful one from the Jewish Museum’s permanent collection that’s also on view here. Viewers can compare the original to Wiley’s re-creation of it in his painting “Alios Itzhak,” as well as marvel at other paper cuts — Mizrah plaques that were hung on the eastern walls of Jewish homes to identify which way to pray (toward Jerusalem) — and at Torah ark curtains that Wiley selected from the collection for display. They’re a welcome addition that gives the exhibition more depth and sets it apart from its gallery predecessor.

The combination of ceremonial and contemporary art makes for an interesting, at times exciting pairing, and it embodies the spirit of cross-cultural pollination so essential to Wiley’s practice. Some of his best paintings illustrate the strange vibrancy that results when different images get mashed up in a global cultural exchange; in one portrait, for example, a young man stares out from amid an almost psychedelic thicket of flowers and animals, calmly asserting his presence. His skin is black, he sports a stud in one ear and a T-shirt with Chinese writing and a picture of Mao Zedong, and his name is “Shmuel Yosef.” This is identity building at its most fluid, and Wiley celebrates it.

“Shmuel Yosef” has another factor that works in its favor: scale. Wiley’s portraits here come in two sizes — big and very big. The former, like “Shmuel Yosef,” are hung where their subjects’ gazes hit you at eye level, drawing you in and mesmerizing you. The latter, even more expansive at 8 feet by 6 feet, lose their intensity to imposing showiness.

Critics have commented on Wiley’s sometimes flat handling of paint, but the flesh of the men here looks sculpted and shiny as light hits and illuminates it (except for that of the one white man, which may or may not be a coincidence). Where the painting does often fall flat is in the backgrounds: Wiley’s translations of the decorative patterns can appear simplified and almost cartoonish in comparison with the intricate originals.

But the biggest problem with “The World Stage: Israel” is conceptual rather than formal. When Wiley first appeared in the art world, recasting young black men from the street as emperors and religious icons, the message was clear. At the Jewish Museum, the intention is murkier, in large part because we (and perhaps Wiley) lack the context. African-American men have a history vastly different from that of Ethiopian- and Arab Israeli men.

Is Wiley attempting to call attention to the racism and discrimination that his current subjects face? If so, we need more information — wall text or an artist’s statement, and certainly not the glossing-over the issue gets in the catalog. There the writer vaguely and quaintly states that, sure, these groups have encountered some economic and social problems, but not to worry, they’ve still contributed their own traditions to Israeli society.

What’s more, the series works well for the Ethiopian immigrants: Set against backdrops that represent Jewish artistic and religious heritage, they gain the power of equality, of seeming to say, “We are Jews, too.” But there’s a dearth of Arabs that goes unexplained. Is Wiley pointing out their underrepresentation in Israel by including only a few of them here? Do the motifs in their portraits hold any special meaning? (Neither the paintings nor the exhibition provide an answer.)

Wiley has created small sculptures of two lions holding the Ten Commandments to top the frames of the Jews; the Arabs, meanwhile, get two lions holding a plaque with a Hebrew translation of the famous Rodney King line, “Can we all get along?” This vexes; its significance beyond vague feelings of brotherly solidarity is elusive. A more logical and potentially meaningful choice might have been a line from the Quran or from Arabic poetry — or at least the Rodney King line in Arabic. As an artist concerned with power and empowerment, Wiley could do better.

Jillian Steinhauer is a freelance writer living in Brooklyn. Her work has appeared in such places as The Awl, The New York Observer and Guernica Daily.