Making a ‘New Jerusalem’ in D.C. 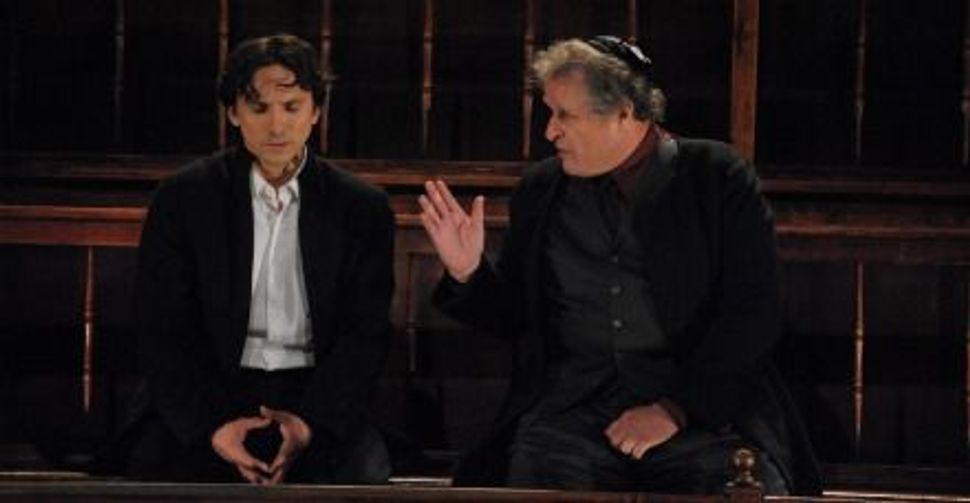 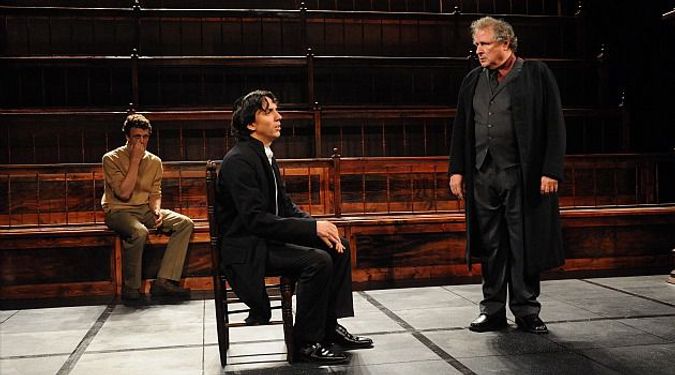 My Way or the Highway: Mortera (Michael Tolaydo), right, warns the young Spinoza (Alexander Strain) of the real possibility of excommunication. Image by stan barouh

Despite a title that sounds like a grad school dissertation, and pontifications that would make a third-year philosophy major proud, “New Jerusalem: The Interrogation of Baruch de Spinoza” keeps theatergoers surprisingly engaged. In fact, the opening night audience at Theater J took in the fast-paced courtroom-style drama with at times audible gasps and guffaws.

Theater J, in residence at the Washington DCJCC, has long been a thinking-person’s theater, staging new works that reflect myriad contemporary Jewish voices from the likes of Robert Brustein, Wendy Wasserstein, Motti Lerner and Ariel Dorfman, not to mention a few canonic standards and works by rising young playwrights, including Neil Simon and Clifford Odets. “New Jerusalem” — which had a successful off-Broadway run four years ago, featuring Yiddish actor Fyvush Finkel — with its heady circumlocutions on the nature of God, is, for all its ponderous philosophy, unexpectedly witty, especially in this Theater J remount.

The successful company never expected a runaway hit when its longtime artistic director, Ari Roth, programmed the David Ives work to close the 2009–10 season, with encouragement from another D.C. theater colleague, Howard Shalwitz, artistic director of the renegade Woolly Mammoth Theatre Company and a longtime Spinoza-phile. Roth reported that he budgeted the play to bring in $42,000 in the sleepy summer-time slot. It brought in close to $120,000 and sold out its final 15 performances, even with 10 extra seats added. “We were very pleasantly surprised,” he said, “and vowed the day the show closed to bring it back.”

Remounting meant storing designer Misha Kachman’s extensive wooden set replicating Amsterdam’s famed Portuguese synagogue, and once more lining up a quartet of D.C.’s most in-demand actors. While Ives made no changes to the script, and only supporting actors are new, this new version, also directed by Jeremy Skidmore, feels meatier, more muscular and, ultimately, more satisfying than its previous production.

That a play about a 17th-century Jewish philosopher facing excommunication struck a chord at all is, according to Roth, a testament to the intellectual curiosity and rigor of his loyal Theater J audiences.

In the context of a theater that’s proudly Jewish but full of provocative questions, we invite in a non-Jewish audience to have this very frank debate about reason and faith.

Spinoza paved the way to the Enlightenment and to modern philosophical thinking, asserting a conception of God as abstract and impersonal rather than as personal and metaphorical. He argued that everything exists as a single substance of the deity, which is equal to nature. This idea, then, subverts the typical idea of free will. He also said that since everything in the universe is a manifestation of God, evil, as well as good, is a part of God. These ideas don’t feel radical today, but in the 17th century they challenged long-held beliefs.

The result is a bracing and frank theological debate between Jews and Christians. Shalwitz, who is presently rereading Spinoza’s masterwork, “The Ethics,” said he finds the philosopher’s logical conception of God enlightening, even beautiful, and sees it successfully represented in Ives’s play. “You almost see his philosophy exhibited in the behavior of the character in the play more so than you hear the philosophy itself explicated, and that’s wonderful as a strategy for a drama,” Shalwitz explained.

The play’s heady, combustible nature rests on the probing and insightful portraits drawn by its lead actors. Eloquent Alexander Strain as the young, sometimes brash, Spinoza remains imperious in the face of excommunication from his community as he confronts his foil, powerhouse Lawrence Redmond as Valkenburgh, Spinoza’s staunch Christian inquisitor. In between them, heavyweight Michael Tolaydo is persuasive as Rabbi Mortera, the community’s steadfast leader and Spinoza’s teacher, who weighs the integrity of both his community and his pupil in this trial.

Though the histrionics spiral upward, particularly in what is nearly a death match of words, ideas and glares between inquisitor and rabbi as they attempt to match wits and intellect with the inimitable Spinoza, that’s when the evening burns brightest. The supporting cast includes luminous Emma Jaster as the philosopher’s young Christian love interest; Brandon McCoy as his scheming friend, and the fine Colleen Delany as Spinoza’s bitter and high-strung sister, Rebekah, whose entrance is a nice coup de theatre.

Ives’s work casts the audience as the eighth character — Amsterdam’s tight-knit community of Portuguese Jews. Performers, who wear essentially contemporary clothing crafted by costume designer Kathleen Geldard to look simple enough to hearken to an earlier era, walk through the audience, frequently addressing spectators. It was a community that had found refuge from the Inquisition in the Dutch city, yet, as the rabbi understands well, accommodations were made that limited Jews’ freedoms. Lighting designer Thom Weaver’s decision to keep a slight glow in the usually darkened theater allows viewers to feel as if they are present at the actual 1656 hearing.

This time, too, Roth’s company takes that interactivity one step further by placing ballots in each program, proclaiming: “Vote! Should Spinoza’s excommunication be reversed?” Audience ballots are being collected and tallied after each show. In a reversal of the initial trial, the Amsterdam Jewish community is itself being prosecuted — this time by the theater.

When the play closes, on April 1, the theater will present a “Spinozium” — a day for study and debate — and a final vote, for or against excommunication. Scholars, lawyers, historians, philosophers and theater artists will also argue the matter throughout the day. Shalwitz will be there to interview The New Republic’s Leon Wieseltier on a panel called “Loving and Hating Spinoza.” Daniel Spiro, one of the founders of the Washington D.C. Spinoza Society, which meets monthly, will offer a brush-up or introduction to those unfamiliar with Spinoza’s groundbreaking philosophies. A group of actors will read a little-known 1953 appeal that David Ben-Gurion sent to the chief rabbinate of Israel, asking them to lift the cherem, or excommunication, to which they averred. Jane Eisner, the Forward’s editor, will be moderating a panel on tolerance, and the D.C.-based father-daughter legal team of Nathan and Alyza Lewin will argue the case against and for, respectively, excommunication before bringing the issue to a final vote. A pair of rabbis — David Shneyer and Nissan Antine — will be on hand to either rescind or reinscript the writ of excommunication.

“The play,” said Roth, who has faced off against discordant elements of the Jewish community — both right and left of center — in response to controversial Theater J programming in the past, “is an analog, a metaphor for Jewish communal politics today.”

Lisa Traiger writes about the performing arts for The Washington Post and Dance Magazine, among other publications.

Making a ‘New Jerusalem’ in D.C.