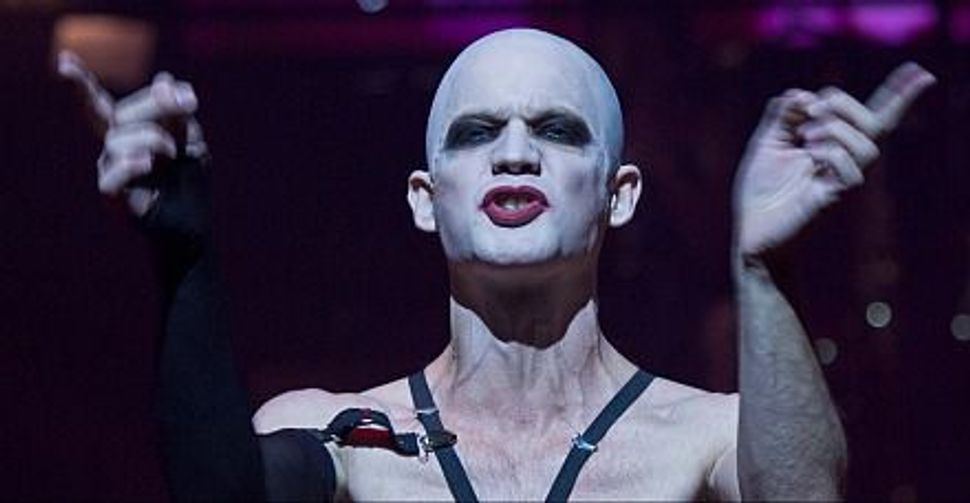 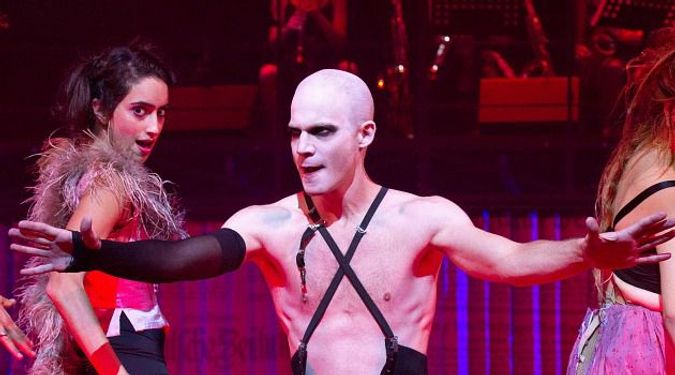 Something Fishy?: The Cameri?s ?Cabaret? stars Itay Tiran as the exuberant host. Image by gerard alon

Inside a dark theater on a recent Friday night, the master of ceremonies slinks up to the microphone and smacks his painted red lips. “Meine Damen und Herren, Ladies and Gentlemen! Leave your troubles outside! We have no troubles here! Here, life is beautiful.” Onstage, he lives in the carefree world of 1931 Berlin, but the audience he beckons in Hebrew sits in modern-day Tel Aviv, at a performance of the Cameri Theatre’s new production of the hit 1966 Broadway musical “Cabaret.”

“Cabaret” takes place in the waning days of the Weimar Republic, between the two World Wars, when Germany enjoyed a period of relative economic and social stability. British author Christopher Isherwood, who lived in Berlin from 1929 to 1933, arrived to partake in the prosperity and document the hopes of a healing nation. What he observed instead was a society slowly spiraling into desperation and fear and the rise of the Nazi Party. From his experience emerged “Goodbye to Berlin,” a collection of stories that included one called “Sally Bowles,” about a frivolous cabaret singer in search of love and fame: that story eventually became “Cabaret.”

The Cameri, the municipal theater of Tel Aviv, first presented “Cabaret” in 1990, and this production marks its only Israeli revival. The show’s producer, Chaim Sela, says that this was the right time to bring it back. He calls the Cameri’s first version of the show “sweet,” with a focus on song and dance, while this production plays up more political themes.

Haaretz critic Michael Handelzalts highlighted those themes, writing that the show “compels [the audience] to ask themselves what they would do… if around them events of increasing violence, tyranny, arbitrariness, bullying and nationalism were taking place.”

With the imminent threat of war with Iran, a surge of laws in the Knesset deemed un-democratic by human rights groups and a recent wave of widely reported discrimination against women in the ultra-Orthodox community, Handelzalts’s review sounds like it could have come from the editorial pages of the past six months.

To be sure, this isn’t to suggest that the issues facing Israel today are comparable to the unraveling of Germany in the 1930s when the Nazis came to power, or that Israel is in danger of suddenly morph ing into the Third Reich. Wherever one stands on the political spectrum, Israel is still a functioning democracy. So Israelis are not flocking to “Cabaret” to learn a lesson. The show is not some prophet warning the masses to change their ways. First and foremost, it’s just damn fine entertainment.

The show has been a staple of musical theater for nearly half a century. This polished version, directed by the Cameri’s acclaimed artistic director, Omri Nitzan, has become one of Tel Aviv’s hottest tickets: According to Sela, the show has already doubled its run and will probably be extended to twice that.

For a show that dives into a German underworld during a period that is particularly loaded for an Israeli audience, the genius of “Cabaret” is how easily the flirty opening numbers and arousing atmosphere of the Kit Kat Club make us forget what’s happening outside the theater walls. It is only in the second half of the production that the cracks in the cabaret begin to show, the political storm brewing outside begins to seep in and the haunting ending finally breaks the spell.

There may be no such doom awaiting us when the curtain comes down in Tel Aviv in 2012. What lingers from “Cabaret,” however, are the disquieting questions it raises about how such lighthearted fun could reach so devastating an end. How did we not see this coming? What could we have done anyway?

The unsettling coup of “Cabaret” is how it slyly holds up a mirror to the unsuspecting viewer and shows us just how little we may have changed. From the comfort of today, we know that the nightmare of 1930s Berlin is behind us. Yet the potent cocktail of bringing “Cabaret” back to life in Tel Aviv is how it mixes such soothing reassurance with a chilling hint that, someday, this decadent city, too, may be unable to leave its troubles outside.

Brian Schaefer, based in Tel Aviv, covers arts and culture for Time Out Israel.