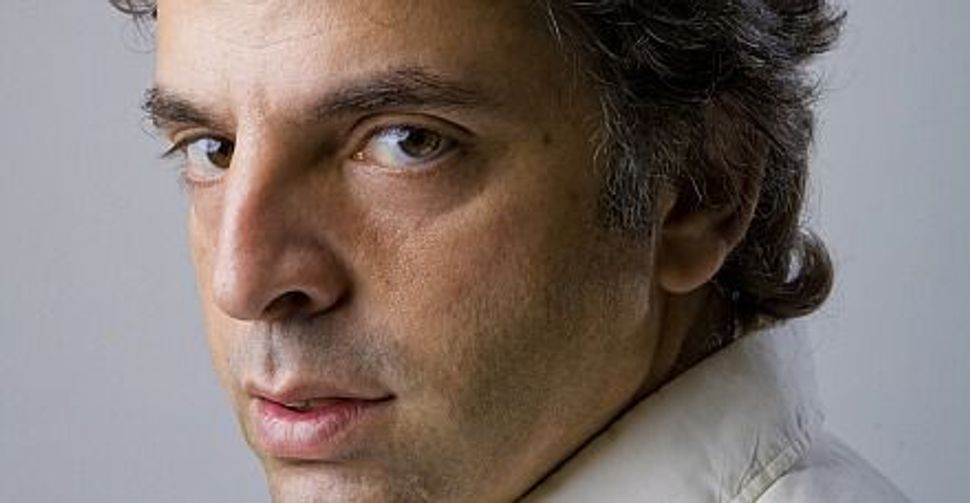 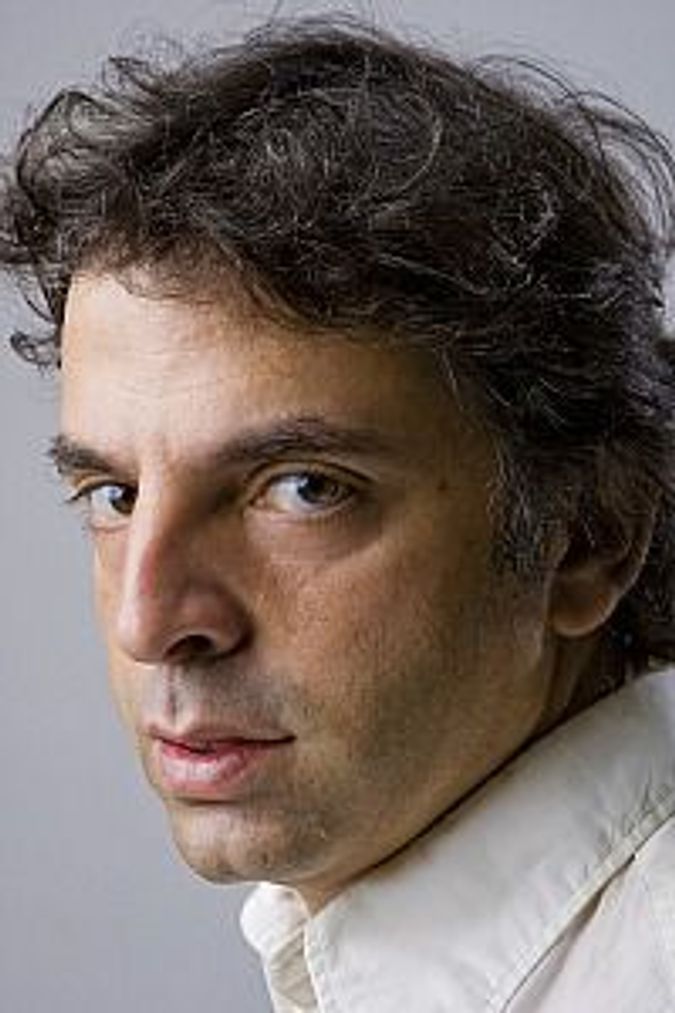 Once upon a time, Etgar Keret was a humble guy scribbling out weird and fantastical stories about Israel’s version of Generation X. With his first few books, he gained a reputation in Israel as one of the country’s rising stars. Then, with the 2004 English-language publication of “The Bus Driver Who Wanted To Be God & Other Stories,” and its 2006 follow-up, “The Nimrod Flipout,” he zoomed with whiplash speed from quirky Israeli writer to international cult figure.

He’s featured in every literary festival the world has to offer. He’s been named a Chevalier of France’s Order of Arts and Letters. He’s elevated above his peers, again and again — by writers as various as Salman Rushdie, Amos Oz and Gary Shteyngart — to the status of Great Author: Voice of a Generation. But also, because of the kind of stories he writes, the kids think he’s cool. He’s got Kurt Vonnegut-Jonathan Safran Foer-type appeal. Comic adaptations are made of his work. Films, too. He — in collaboration with his wife — has even directed his own movie, “Jellyfish,” which won the Cannes Film Festival’s Camera d’Or prize.

His new book of short stories, “Suddenly, a Knock on the Door,” is being published in April in English translation, and the Forward has asked me to review it. This is a harder task than you might think. At this point in Keret’s career, criticism seems superfluous. He’s a brand on its way to becoming an industry, and the commercial noise around his work is apt to distort and drown out any serious attempt to explore its artistic merit. 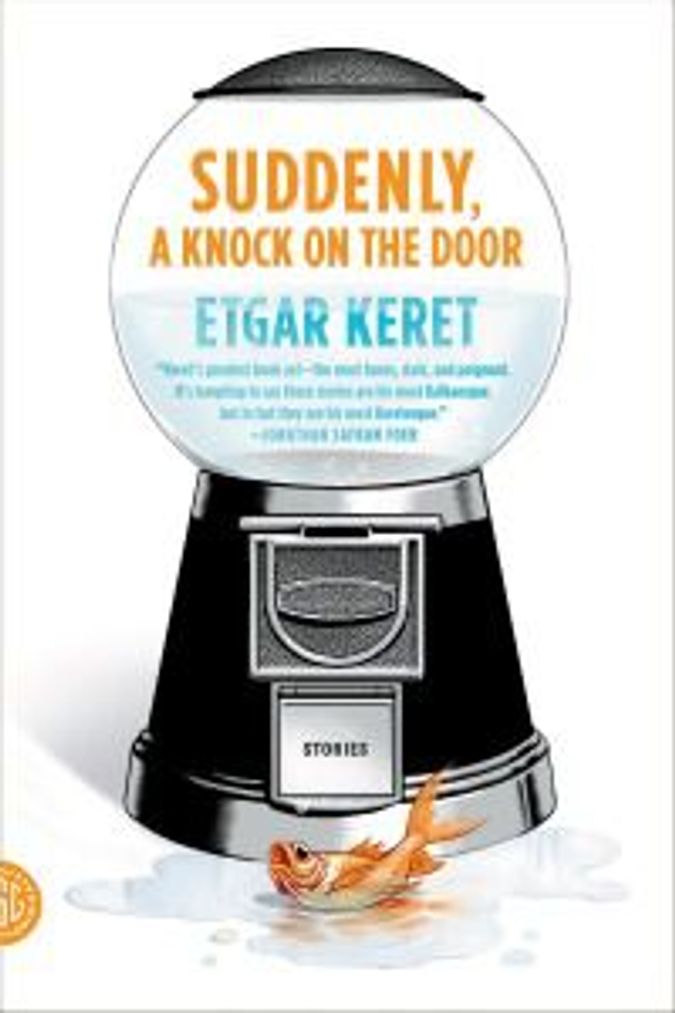 This is not — or not wholly — Keret’s fault.

Like I said, Keret started out as a kid from Tel Aviv, spinning tales about what it was like to be young in the lonely, cynical, pop-inflected landscape of his particular time and place. He wrote about men, mostly — Israeli guys who spent most of their time chasing tail and money and hanging out on the beach, wondering, when they thought about much at all, what had happened to the meaning that life was supposed to have had — the sort of subjects moody boys have been writing about since there’s been such a thing as a moody boy.

But, oh, the imagination on this boy! Characters walk in and out of dreamscapes that are part and parcel to their realities. Dogs don’t die when their owners shoot them. People wander the afterlife in search of true love. People living on the moon have the power to turn their thoughts into concrete objects. In “Fatso,” maybe his most famous story, the narrator’s girlfriend turns into a massively hairy, sports-obsessed man every night. In the best of these pieces, Keret was able to transport the humdrum lives of his characters, through rings of metaphor, into rich metaphysical dimensions. His writing evoked a stranger, more porous world than our own, but it did so without abandoning the sad late-capitalist reality of the now.

It’s no surprise, then, that writers and editors and literary standard-bearers the world over were ready to hail Keret as a prophet capable of forging an exciting new direction for a literature lost in the desert. He was appealingly cosmopolitan in his worldview — though his work was set in Israel, and his characters sometimes grappled with the specific conflicts of Israeli life (blown-up buses, stints in the army, the need for reliably excellent hummus), its attitude was secular and vaguely left-leaning, presenting a vision of a pop-induced global culture that transcended geographical and cultural boundaries. Tom Waits even starred as the eponymous Kneller in “Wristcutters: A Love Story,” the 2006 film version of “Kneller’s Happy Campers.”

It was flattering to think that, even in a place as riven as Israel, our side might be winning the culture war. Then, also, it was quirky, and quirky was good. People who don’t like to read, or who don’t like to read “literary fiction,” anyway, will pick up a book if they know it’s quirky. The hope is that Keret’s light, unthreatening surrealism might bring a larger readership to us all. And the stories are so short! You can read one in the time it takes to watch a YouTube video. They’re brief, accessible and not weighed down by the belabored realism that most writers of Keret’s generation mistook for seriousness of intent. How great would it be if Keret could get people interested in reading short stories again?

I sympathize with this line of thinking. It’s what went through my head, too, when I first encountered Keret’s work. It was exciting to read, fresh — like that unattractive guy at the bar who, through sheer chutzpah, turns out to be a master pickup artist.

So what if his writing is sloppy and haphazard — simple sentences, colloquial voices, a chatty reliance on clichéd phrases like “He didn’t miss a beat,” “This guy means business” and “It all started with a dream.” A semiliterate college freshman reading prose like this might understandably think, “Hey, I could do this, too.” That’s okay, says the literary professional with high hopes for Keret’s work: With time, the guy will grow as a writer; he’ll refine his prose and expand his themes and learn how to control his talents.

But what if he doesn’t? What if, instead of growing as a writer, the guy stagnates and rehashes the same tropes and tactics over and over and over again? What if he seems to be growing complacent, bored even, with his talent? On the evidence of “Suddenly, a Knock on the Door,” this is the situation in which Keret has found himself. His tactics have become familiar; they no longer surprise. The metaphor will be literalized. The lesson that the parable seems to be leading toward will be inverted. The reader familiar with Keret’s work can see what’s coming. Worse, the lazy turns of phrase, the clichés and inaccurate locutions and vague fudges of the language that on inspection mean nothing at all, continue to proliferate, even when, as in “The Story, Victorious,” the narrator is meant to be the author himself.

Few of the 36 stories in the book extend much beyond three or four pages in length, which wouldn’t be a problem if they were truly stories. What they are instead are premises, ideas for stories, that Keret plays with just long enough to discover the complications they contain before he abandons them without having addressed these complications. When he does bother to follow his stories out to their logical end — in “Unzipped,” with its heroes zippered into skins that hide their true personalities; and “Black and Blue,” with its mixture of psychological insight and blithe emotional cruelty, and “Not Completely Alone,” with its sympathetic portrait of a femme fatale and the men who die for her, along with three or four others — he shows that he can still charm and even jolt the reader into states of wonder.

Generally, though, Keret phones it in this time around. And whether or not he has the clout to get away with this, he must realize that doing so breaks a sacred trust.

Writers, like all artists, have the prerogative to pursue their talent in any way they can. The single thing that can reasonably be asked of them is that they strive to retain their integrity, that with every new piece they push themselves closer to the ephemeral, unreachable goal of perfection. Succeed or fail, the artist must try. Otherwise he’s just a content provider.

And what if, satisfied with the hype he’s previously received, he stops trying? For that he can be faulted.

Joshua Furst is a frequent contributor to the Forward. His latest book is “The Sabotage Café” (Knopf, 2007), a novel.