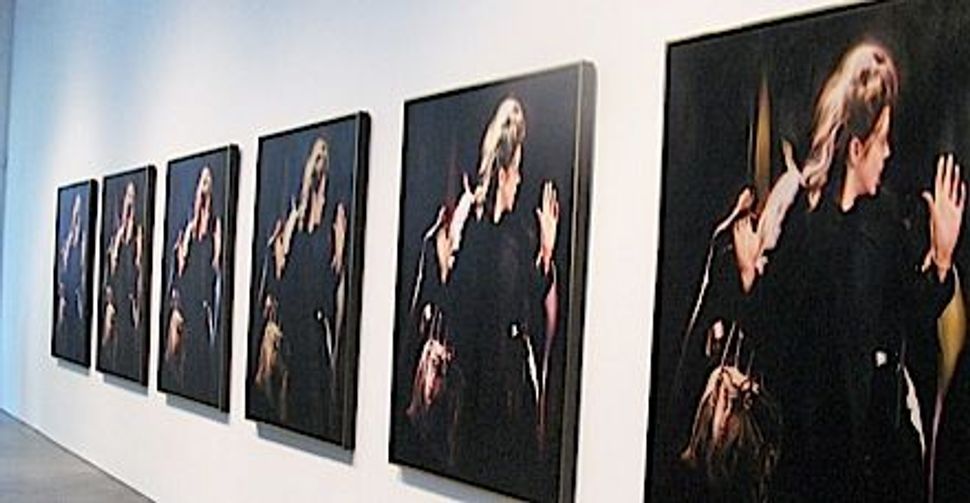 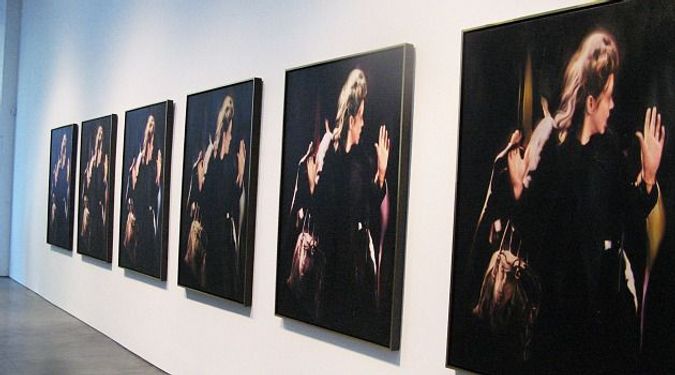 Perched above the velvet ropes, club kids and chain stores of Gansevoort Street, in Manhattan’s meatpacking district, Nir Hod’s studio, filled with books and light, feels more like a think tank than an artist’s lair.

Loquacious and handsome, with wavy, dark hair framing chiseled features, Hod, 40, is consumed with “Mother,” his current exhibit at the Paul Kasmin Gallery in Chelsea. 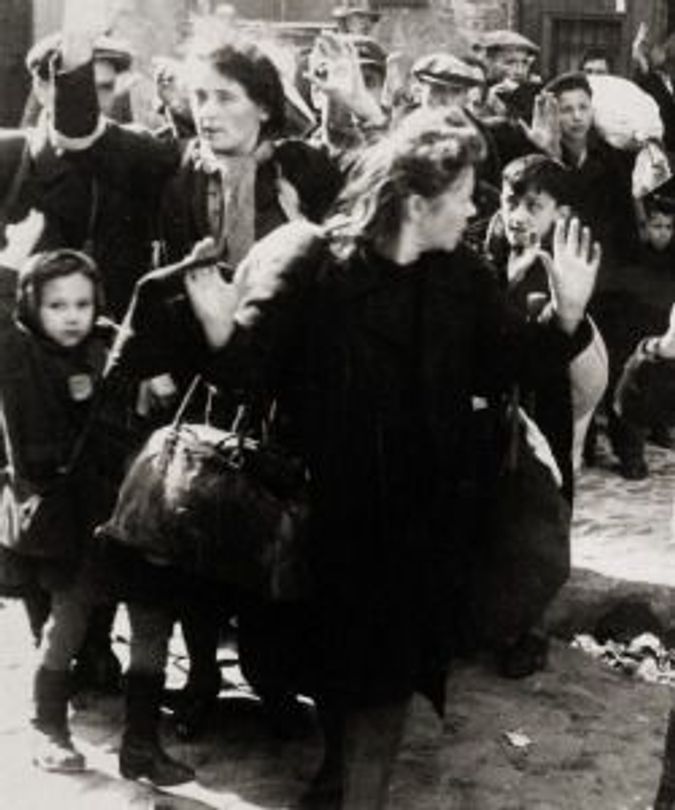 Famed Photo: Nir Hod?s installation focuses on the woman in this famed photo.

In this series of 10 paintings, he amplifies literally and creatively one woman from Franz Konrad’s famous 1943 photograph, “The Boy From Warsaw Ghetto.” His goal, he told the Forward, was “to bring her to the front, to give her all due respect and to see her in her true colors.”

Hod’s hyper-focus on this figure began in 2009. He was researching the iconic Nazi photo online, when on CNN’s homepage he saw an image from Life magazine of Hillary Rodham Clinton giving a lecture. He was struck by the photo’s beauty, how Clinton’s hands held up that way made her look like she was “begging for her life.” That stance, of someone scared or surrounded, gripped him then, and now it grabs those viewing his work.

Each of the nine smaller canvases (59 inches by 43 inches), exhibited side by side in the gallery, uses muted shades from “a dreamy, melancholic palette” that Hod describes as colors from old magazines blended with those from the Old Masters. The differences between the paintings are definite but subtle, with the exception of featured colors that vary for each.

The singular, larger painting is twice the size of the others, and the woman’s features appear elongated, more exaggerated. “You can really feel her body. There’s something so strong about the hands and the expression. Here you can really feel her pain,” Hod said, pointing out that her hair piled high “is almost like a skull, like a death mask…. It’s almost like a child seeing his mother in this situation.”

Hod cites Andy Warhol’s Shadows paintings as a major source of inspiration. And it’s clear that the subject of “Mother” is also in the shadows, having ceded the stage, in Konrad’s photograph, to the child.

Hod’s work has been displayed worldwide since his first solo show, at age 23, at Jerusalem’s Israel Museum. But the 2011 “Genius” exhibition, at the other Paul Kasmin Gallery (half a block away), “was the big break in my career.” The sold-out exhibit included controversial paintings of pouty children — some smoldering with cigarettes — and three bronze sculptures, selling for as much as $45,000. After that success, the nine “Mother” paintings were priced at $75,000; according to the gallery, they have already sold.

While the identity of the boy in the photograph remains a subject of speculation, little is debated and even less is known about the woman who is the focus of “Mother.” That’s fine with Hod: “Most of the time, the facts are not important for me. Facts destroy the experience.”

Words enhance it. “Titles are really, really important for me,” he said. “Once you call it ‘Mother,’ I think it takes it to a different level.” He speaks lovingly of his own mother, who came from Israel for the show’s opening, but the name is archetypal rather than personal: “It became such a myth…. The title… makes it larger than life and at the same time makes it more tragic.” “Mother,” he said, repeating the word over and over again in his melodic Israeli accent. “It’s like she’s the missing mother.”

Born in Tel Aviv (his grandmother was from Budapest), Hod grew up with this chilling image captured the last day before German soldiers evacuated the ghetto. As with most who know this photograph, he always thought the boy was its center, and he wondered why he never looked at the woman in the forefront. “I wanted to do something about her,” he explained. “She deserves it…. For me, it’s not about the Holocaust. I wanted to bring something new. I want to change the familiar.”

Hod believes that people often miss what’s in their peripheral vision: “How many times in food, in clothes, in general, in life, does everybody come home, and straight they go to the refrigerator and then to the TV. Why? Because it’s very easy.”

In the bigger painting, he made “Mother” taller and thinner, emphasizing her luxurious satchel that today could be a Hermès or Louis Vuitton bag. But while designer name-dropping and modern contexts swirl around (some say she looks like a lady hailing a cab uptown), he’s more excited to point out that creases in her purse’s leather resemble a face: “It’s so amazing, almost like when Jesus appears.”

If people cry when they see “Mother,” Hod said, he will feel he’s succeeded: “It’s so beauti-

ful that art, song, music, movies, can expose you to something that was in front of you and you never saw it.”

His recurring artistic themes — heartbreak, loss, death, tragedy and tears — juxtapose with a personally upbeat demeanor. “Life is too short and too interesting for me to stop on this,” he told the Forward. His next two years are already planned, set aside for a project that reflects a fascination with dictators.

That fascination, combined with unflinching confidence, makes him sound like he, too, wants to dominate the (art) universe.

“It’s important for me to be a lot of things. I’m moved by major people that changed the world, and I would love to be part of it….” he said. “When I close my eyes, I see Warhol, I don’t see artists sitting smoking a joint in the East Village. I see Picasso, I see Jeff Koons, I see Caravaggio, Rembrandt.”

When the artist as a young man landed in the meatpacking district in 1999, the neighborhood was quiet. Since then, restaurants and boutiques have moved in and even the Whitney Museum has arrived — next door. Until a year ago, Hod worked and lived in his spacious studio, but now he cycles daily from a Chelsea apartment he shares with his girlfriend. “At some point you have to separate,” he explained. “I’m so obsessed with my art that even if I’m not here, I’m still working.”

Regarding more details about his personal life, he would only say: “I’m very narcissistic; I feel like I’m in the center of the world and I take from it what I want.”

Lisa Amand is a feature writer from Brooklyn.

“Mother” is on display at the Paul Kasmin Gallery (515 West 27th Street) in New York until April 28.