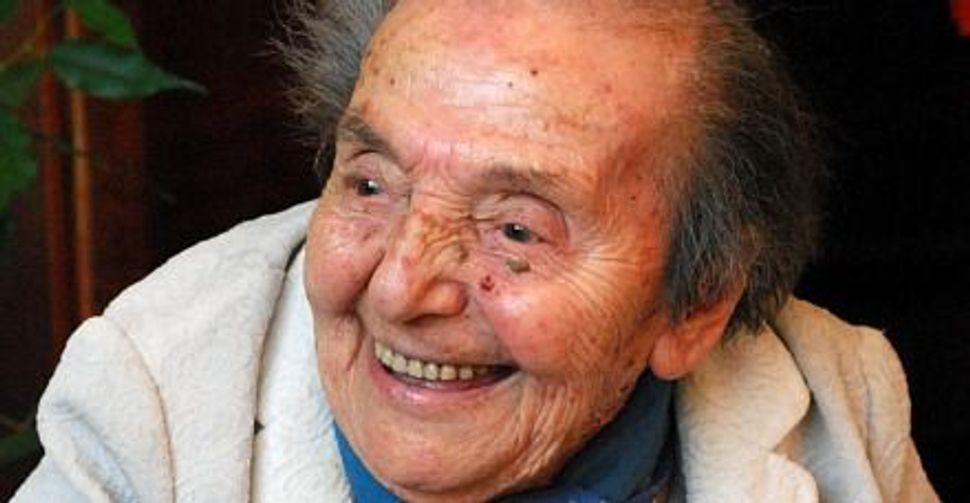 A Century of Wisdom: Lessons From the Life of Alice Herz-Sommer, the World’s Oldest Living Holocaust Survivor
By Caroline Stoessinger
Spiegel & Grau, 256 pages, $23 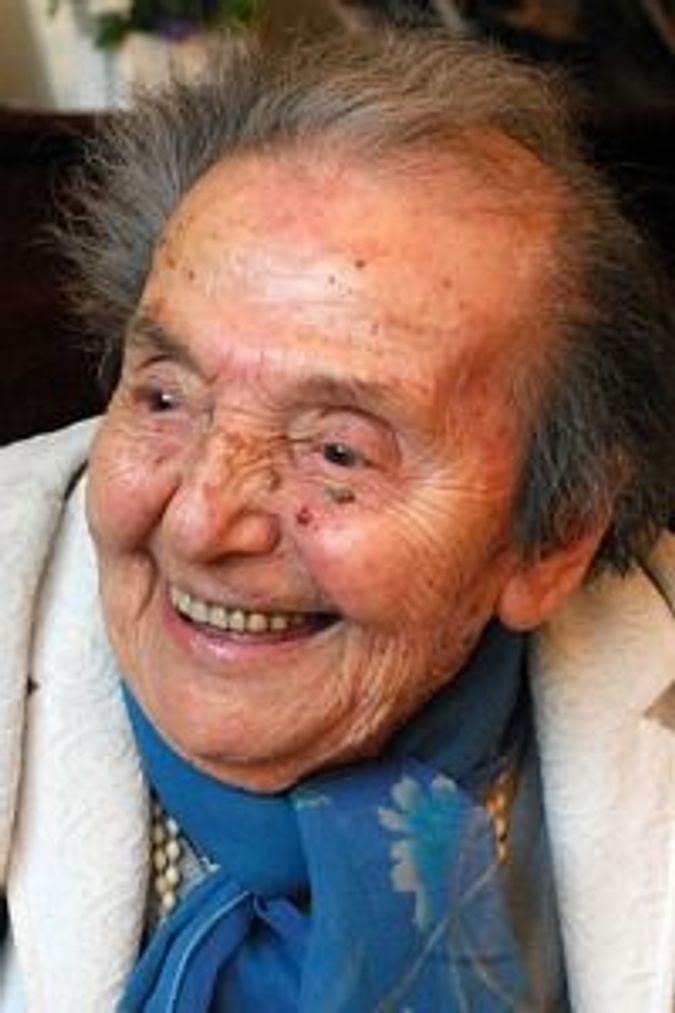 Let us consider the astonishing story of pianist Alice Herz-Sommer. Born in prewar (that is, pre-World War I) Prague, Herz-Sommer survived Theresienstadt, made aliyah and finally settled in London. Along the way, she crossed paths with such world-historical figures as Gustav Mahler, Franz Kafka and Golda Meir. Now 108, Herz-Sommer is renowned for her optimism — and for being the world’s oldest living Holocaust survivor.

Caroline Stoessinger recounts all this in “A Century of Wisdom,” and I hope the reader will forgive me for feeling a little trapped. Given all of the above, how could I say anything bad about the book? How could any critic possibly be objective about it?

Maybe it’s best, before evaluating the book itself, to say more about its estimable subject. Herz-Sommer was born in 1903 to a merchant father and a cultured mother who were friendly with Thomas Mann and Rainer Maria Rilke, as well as Mahler and Kafka.

Herz-Sommer remembers Kafka as kind, indecisive and always “dressed for the office.” He was a regular at the house; he came to a Passover Seder and helped the kids search for the afikomen, the hidden matzo. One summer day, he took young Alice and her twin sister, Mitzi, for a hike; over a lunch of “magic sandwiches,” he told stories about “wild, imaginary beasts” (stories not recounted by Stoessinger, alas).

As an adult, Herz-Sommer built an enviable life for herself, one of hard work and modest comforts, friendship and art. She established a career as a teacher and concert pianist: Stoessinger reports that Max Brod, another family friend, wrote “glowing” reviews of her performances. In 1931 she married Leopold Sommer, a kind-hearted businessman. Their son, Rafael, was born in 1937.

It all ended in 1939, when Hitler’s army marched, unopposed, into Czechoslovakia. Brod had convinced Herz-Sommer’s sisters to immigrate with him to Palestine, but Herz-Sommer had been reluctant to leave behind her aging mother (her father had died in 1930, from natural causes).

In 1942, Herz-Sommer’s mother was sent to Theresienstadt. A year later, Herz-Sommer and her family followed.

The Nazis advertised Theresienstadt as a “spa town” where cultured Jews lived in relative comfort. In reality it functioned as a transit camp where Jews were housed before deportation to death camps like Auschwitz. It was also a labor camp. Stoessinger writes that Herz-Sommer “split mica chips for war production — hard and dangerous work for a pianist’s hands.”

But a rich cultural life did exist in the camp. Rafael, who showed an early talent for music, sang in “Brundibár,” a children’s opera; Herz-Sommer herself performed more than 100 times, usually in solo recitals played from memory.

“Music was our food. Music was life,” Herz-Sommer says in “A Century of Wisdom.” But music brought more than spiritual nourishment. Her talent caught the attention of a young German soldier, who contrived to keep her from being deported to Auschwitz. 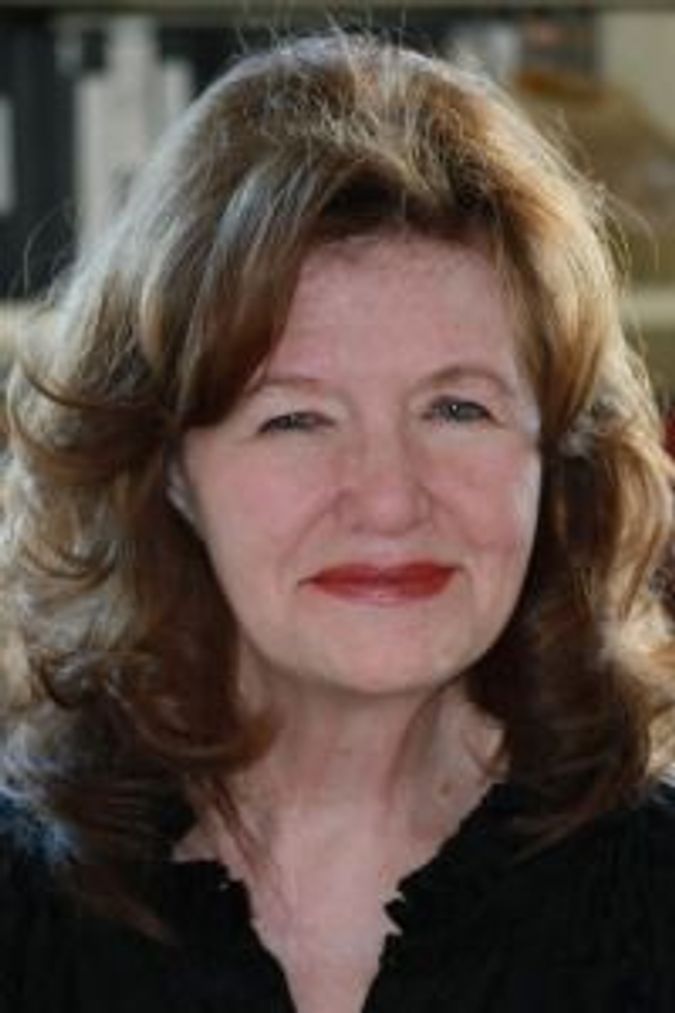 Herz-Sommer was also fortunate (if such a word is appropriate in this context) in that Rafael was permitted into the women’s quarters. His mother’s proximity fostered a sense of security in the boy, as did her cheerfulness: “Never did I let my son see my fear or worry. Laughter was our only medicine.”

Soviet soldiers liberated Theresienstadt in May 1945. By then, Leopold had been deported to Auschwitz and then Dachau. A few days before Dachau’s liberation by American soldiers, he died of starvation and exposure.

And yet, Herz-Sommer’s remarkable optimism made it through the Holocaust intact.

Back in Prague, she developed feelings for Michael Mares, a heroically outspoken journalist; even after the Communists threw him in jail, she believed she could have a future in Czechoslovakia. Finally her sisters convinced her to leave, and she immigrated to Israel in 1949. In Jerusalem she re-established a life based on the piano. Brod sent her students; she performed; she hosted informal Sunday recitals. One Sunday, Meir, who lived nearby, helped peel potatoes for goulash.

Rafael studied cello at the Paris Conservatory and eventually took a prestigious teaching job in England. In 1986, Herz-Sommer moved to London to be close to him and his two sons. In 2001, after performing in Israel, he died suddenly of an aneurysm.

“The only time that my son gave me pain was when he died,” Herz-Sommer says. But she seems incapable of dwelling on this or any sorrow. Although she doesn’t get out much anymore, she has troops of friends, and she still practices the piano with ferocious discipline.

And she’s achieved a kind of fame. In 2004 she appeared in “We Want the Light,” a documentary about the complicated relationship between Jews and German music. A 2007 book, “A Garden of Eden in Hell,” recounted her life story; it was recounted again in 2010, in a 50-minute television documentary, “Everything Is a Present.” Most bizarrely, in January of this year, self-help guru Tony Robbins interviewed Herz-Sommer.

Which leads me back to “A Century of Wisdom.” With so much of Herz-Sommer’s life already documented, I have to wonder if (dare I say it?) another book was necessary. Especially since this one feels (God forgive me) padded. There are long passages of historical episodes — about the shameful expulsion of ethnic Germans from postwar Czechoslovakia, about the Eichmann trial — that could have been addressed with a couple of paragraphs. There are testimonials from her students, as well as inspirational quotations. There are recipes.

Another troubling aspect of the book: When I poked around the Internet to learn more about Herz-Sommer, I found out that “A Century of Wisdom” is categorized by its publisher as “self-help.” So I guess Robbins isn’t the only one who sees a connection between the Holocaust and self-actualization.

Even more depressing is Herz-Sommer’s Facebook fan page, which is really a marketing tool for another book about her. Or I should say a previous book: “A Garden of Eden in Hell” is being republished in April with a friendlier title, “Alice’s Piano.” I think it’s time someone stepped forward and told some of these folks: “Thanks very much. Let’s leave Alice alone for a while.”

But let’s follow Herz-Sommer’s example and end on a positive note. First, by all accounts she seems like a lovely woman who has led an exceptional life. And second, I really did learn something important by reading “A Century of Wisdom.” It came in the last line of the book, and I took it as a challenge, something that I hope to be able to say in my old age: “When I die I can have a good feeling. I believe I lived my life the right way.”