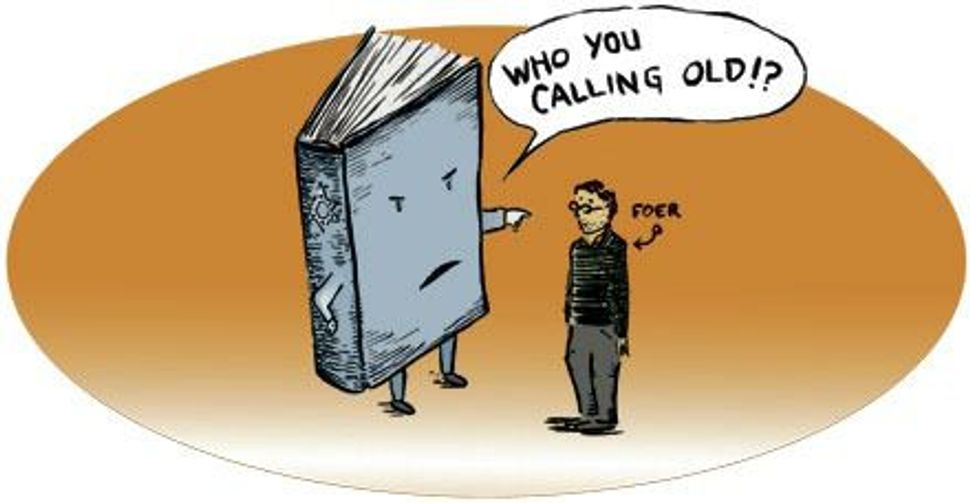 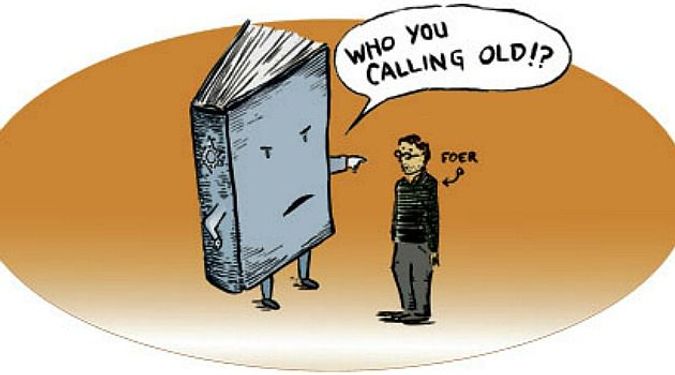 Last week I dealt with the New American Haggadah, edited by novelist Jonathan Safran Foer. A few days after writing the column, I noticed an op-ed by Foer in The New York Times in which he discussed the new Haggadah in light of his evolving relationship with Jewish tradition. Speaking about how raising children has affected this relationship, he wrote:

“Like every child, my 6-year-old is a great lover of stories, but none more than those from the Bible. So between [his] bath and bed, my wife and I often read to him from children’s versions of the Old Testament. He loves hearing those stories, because they’re the greatest stories ever told.”

It’s odd, I must say, to find a Jewish writer who has come to value the Hebrew Bible referring to it by its Christian name of “the Old Testament.” As has been pointed out ad infinitum, there can only be an “old testament” if there is also a new one — and it is precisely the claim that there is a new one that marks Christianity’s break with Judaism. To speak of “the Old Testament” is therefore to make a verbal concession to this claim that Jews who take their Judaism seriously should want to avoid.

Ironically, however, the very concept of an “old” and “new” testament is an “Old Testament” one. It goes back to several verses in the 31st chapter of Jeremiah, which read in my slightly altered version of the King James translation: “Behold, the days come, says the Lord, that I will make a new covenant [Hebrew b’rit ḥadasha] with the house of Israel and with the house of Judah. Not according to the covenant that I made with their fathers in the day that I took them by the hand to bring them out of the land of Egypt, for that covenant they have broken…. But this shall be the covenant that I will make with the house of Israel: I will put my law in their inward parts and write it in their hearts, and will be their God, and they shall be my people.”

The Hebrew word b’rit, accurately translated by the King James as “covenant,” is known to many unlettered Jews from the term b’rit mila, the “covenant of circumcision,” the “bris” of Ashkenazi Jewry. In the Christian interpretation of Jeremiah 31, first found in Paul’s Epistle to the Hebrews, Jeremiah’s “new b’rit” refers to the coming of Jesus, at which time the “outward” law, the ritual commandments given at Sinai, will be replaced by an “inward” law of faith and love. For Christianity, the “New Testament” is the record of this replacement.

And yet if b’rit means “covenant,” why doesn’t Christianity call its scriptures “The New Covenant” and the Hebrew Bible “the Old Covenant”? Indeed, foedus novum, “new covenant,” is how the fourth-century church father Jerome translated Jeremiah’s b’rit ḥadasha in his Latin Vulgate, which became the Catholic Church’s official Bible. On the other hand, in his Latin translation of the Epistle to the Hebrews, which was originally written in Greek, Jerome has novum testamentum or “new testament.” And in the Vetus Latina, the Christian translation of the Bible into Latin that preceded Jerome’s, Jeremiah’s b’rit ḥadasha is also rendered as novum testamentum, not as foedus novum. How is all this to be explained?

For an answer, one has to turn to the Septuagint, the pre-Christian Jewish translation of the Bible into Greek, made in third-and-second-century BCE Alexandria. There, Jeremiah’s b’rit is translated as diatheke, a word generally meaning “last will and testament,” but also signifying “covenant” in Alexandrian Greek. Apparently unaware of the Alexandrian usage, the anonymous translator of the Vetus Latina, who knew no Hebrew and was working solely from the Septuagint, rendered diatheke as testamentum, Latin for “last will and testament,” while counting, so it would seem, on its closeness to testimonium, “witness” or “testimony,” to give it a broader connotation. And although Jerome, who did know Hebrew, changed this to foedus in Jeremiah, he stuck with the Vetus Latina’s testamentum in his translation of Paul’s epistle. He did so because this fit Paul’s understanding of diatheke, which was that of the “eternal inheritance” of redemption bequeathed by Jesus as his legacy to mankind.