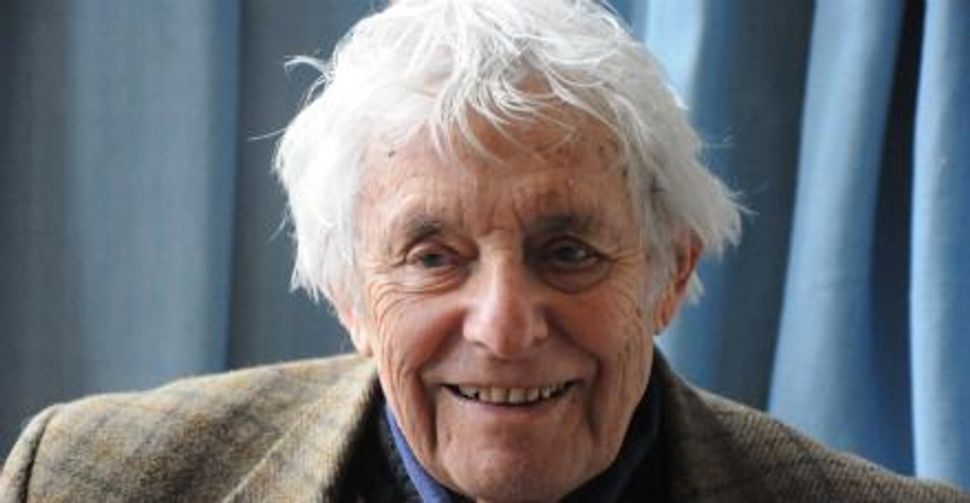 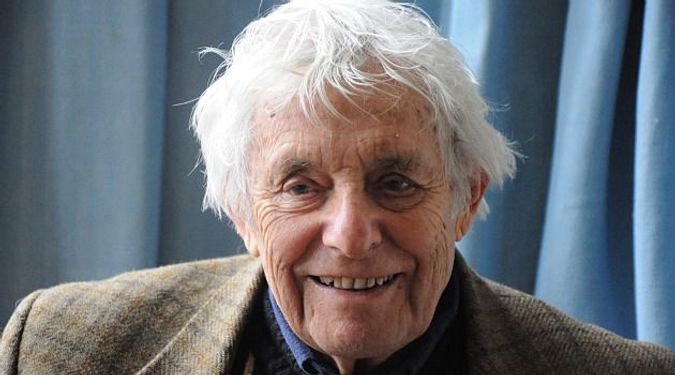 Love Will Survive: The career of Welsh-Jewish poet Dannie Abse is still going strong at age 88. Image by Paul Gogarty

Though “What will survive of us is love” comes from his captious contemporary, Philip Larkin, the line might stand for the life and career of Welsh-Jewish poet Dannie Abse. Having turned 88 last September, Abse was appointed Commander of the Order of the British Empire, or CBE, in the 2012 New Year Honours, “for services to poetry and literature.” With a new collection, “In Extra Time,” out in April from London’s Enitharmon Press, as well as a January reprint of his enchanting anthology, “Ode to Love: 100 Poems of Love & Lust,” from Portico Publishing, Abse is a benevolently omnipresent caregiver in verse, an appropriate status given his longtime day job as a pulmonologist at a chest clinic in London.

His 1954 autobiographical novel, “Ash on a Young Man’s Sleeve,” and 1974 memoir, “A Poet in the Family,” are redolent with warmhearted Yiddishkeit, describing how although he came from an artistic Jewish family (his cousin was Swansea artist Leo Solomon), Abse faced paternal opposition to devoting his life solely to literature. Respecting his father’s wishes left Abse “chasing two hares” — medicine and writing — for decades until his retirement as a doctor, in 1989. “A Poet in the Family” explains that as a small boy, Abse had

but the vaguest conception of the difference between Christian and Jew…. “Who’s Jesus Price, mama?” I asked. “Not Price, son,” my mother said. Once again she explained to me that, as far as Jews were concerned, Jesus was not the son of God. “A good man,” my mother insisted, as if she knew him personally, “but not divine, not the son of God. Do you understand?” My mother knew many things. She could speak Welsh as well as English, Yiddish as well as Welsh. Some of the “wise” sayings from Welsh and Yiddish she loosely translated into English. I know them still — but I am not quite sure, even now which proverbs are Welsh, which Yiddish.

In “Ode to Love,” Abse expresses much familial affection, including a wedding poem in praise of his wife, Joan, who died in 2005, and a poem titled “Bonds,” written by his friend, British-Jewish poet and translator Elaine Feinstein, in tribute to her husband. Abse is too aware of human behavior, though, to include only admirable paramours. His own translation of Heinrich Heine’s “A Woman” features a naughtily misbehaving protagonist and her peccant boyfriend:

At six in the morning they hung him high
— For fooling and thieving he had to die.
At seven o’clock he lay stiff in his shroud;
And she quaffed red wine and laughed aloud.

Laughter is a major element of Abse’s artistry, along with never holding a grudge. This all becomes clear in his introduction to a poem, “Jealous Adam,” by Czernowitz-born Yiddish author Itsik Manger as translated by Jacob Sonntag, who founded London’s The Jewish Quarterly. In his note, Abse relates with gentle wit his first meeting with Manger, in the 1940s: “Lubricated with vodka, [Manger] promptly punched me on the jaw because I was young and wrote poetry!”

Many another poet would have held a lifelong grudge, but not Abse, who doubtless learned forbearance from his two eminent brothers: Wilfred, a psychotherapist, and Leo, a solicitor who became an influential Member of Parliament, representing the Welsh industrial town of Pontypool. (Abse also had a sister, Huldah, who died last year in France at 98.) After hearing the news about his CBE appointment, Abse’s first thought was of Leo, he confided to BBC Radio during an interview at his home in London’s Golders Green. Leo Abse, who died in 2008 at 91, never received any such honors, despite a lifetime of public service, perhaps because he raucously supported some causes decades in advance of most people, such as his vehement 1960s defense of gay and lesbian rights.

Leo Abse was known for basing speeches in parliament on the psychoanalytical research findings of his brother Wilfred, a mainstay of the University of Virginia’s Department of Psychiatry from 1962 until 2000. Wilfred Abse published widely on such subjects as hysteria and group therapy, and Leo Abse applied what he understood of these findings to the political turmoil of modern Britain, as in his “Margaret, Daughter of Beatrice: A Politician’s Psychobiography of Margaret Thatcher,” which Jonathan Cape published in 1989. Boldly going where not even the recent Meryl Streep movie went, Leo Abse made much of Thatcher’s omission of her mother’s name in her official entry in “Who’s Who.” To him, this signified that Thatcher had been “denied her mother’s breast” as an infant, a denial that later, as secretary of state for education and science, Thatcher inflicted on the British people by notoriously cutting the time-honored free milk program for schoolchildren. The act earned her the nickname of “Snatcher Thatcher.”

In 1996, Leo Abse followed this volume with “Man Behind the Smile: Tony Blair and the Politics of Perversion” from Robson Books, diagnosing Blair as “suffering from emotional and psychological incontinence.” Leo’s posthumously published “Old Testament Stories With a Freudian Twist,” out in 2010, was equally dramatic if less directly ripped from the headlines.

Old Testament stories with a Freudian twist might describe a certain amount of Dannie Abse’s subject matter, as featured in his 2003 “New and Collected Poems” from Hutchinson. Yet Abse writes with notably more linguistic refinement and grace than are found in his brother’s brash outbursts. In his 1940s poem “Delilah,” Abse depicts the biblical temptress in psychological torment, remorseful over her treatment of Samson. Claiming that her “dreams were ever guilty,” Delilah remonstrates with the fallen hero: “Now speak no more, dear giant, in my head / your words shriek however softly, / speak no more Samson, you are dead, / and I am punished and alone in Gaza.”

Another quintessentially well-honed Abse poem that seems to breathe easily, confirming his natural inclination for both writing and his medical specialty, is “Shmelke,” from the 1990s. It was inspired by an anecdote from the life of Shmelke of Nikolsburg, a noted 18th-century Galician Hasidic rebbe. By praising himself in front of a mirror, and “uttering absurdities,” Shmelke grew immune to being over influenced by praise from others. When the now much-praised Abse received news of his CBE, he first thought of his brother’s feisty rebelliousness and weighed whether or not to refuse the award. Since Abse’s life and art are a thanksgiving, ultimately loving gratitude won out, as in his late poem “Valediction”: “In this exile people call old age / I live between nostalgia and rage. / This is the land of fools and fear. / Thanks be. I’m lucky to be here.”

Listen to him discussing his CBE on BBC Radio.