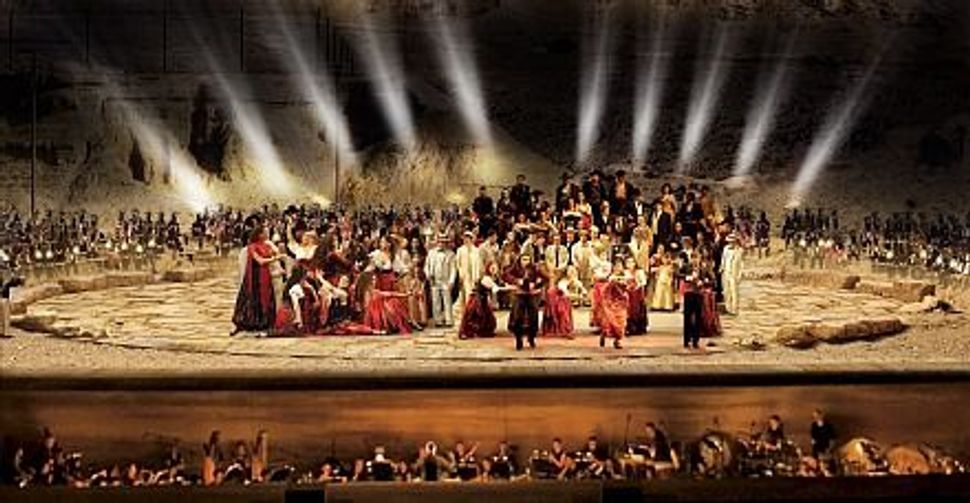 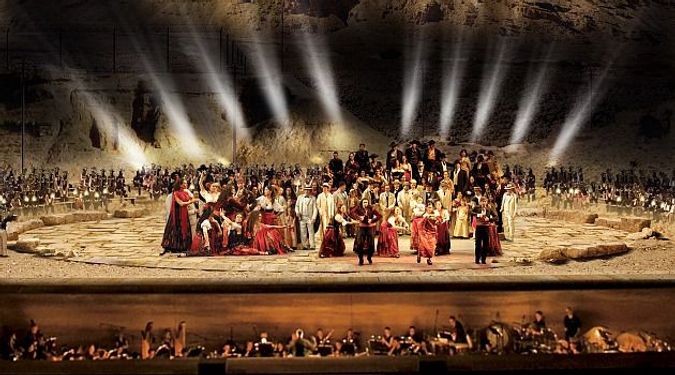 Five Festivals: The annual Dead Sea opera festival is only one of the summer festivals going on across Israel in 2012. Image by courtesy of masada dead sea opera festival

Tourists heading to Israel hit an all-time high in the first quarter of 2012. From January through March, 637,200 tourists arrived in Israel, up 2% compared with the same period last year.

While part of the uptick is due to factors out of Israel’s control, such as economic recovery, large numbers of tourists are being drawn by cultural and sporting events. That’s especially the case during the summer, when Israel’s festival season kicks off with hundreds of offerings for all tastes and interests. From the Galilee in the north to Eilat in the south, here are the Forward’s top five picks for summer festivals:

Remember those childhood tales about the magic cup that never runs dry — and holds whatever beverage you most desire? Well, from July 30 to August 2, the Israel Museum in Jerusalem (www.imj.org.il) will make that myth a reality for grown-ups.

At the Israeli Wine-Tasting Festival, participants can pay 80 shekls, or about $20, for a glass at the entrance, and representatives of 55 Israeli wineries will keep it topped all night. Many wineries erect stalls and mock cellars for the event, where winemakers and connoisseurs chat about production methods.

Attendees are invited to relax in the museum gardens, which are normally closed at night, and even explore some museum exhibitions. There will be jazz bands, cheese tastings and stalls selling food from Jerusalem restaurants. Most of the wines, and all of the food, will be kosher.

“We find that increasingly, in recent years, the wineries bring their very best wines, which means that you can end up drinking $50 or $100 bottles,” said Ran Toren, the festival organizer.

Toren, who owns three wine shops in Jerusalem, launched the festival with a friend in 2004. “It was [during] the Second Intifada, and we just wanted to do something enjoyable for the people of Jerusalem,” he recalled. Today, the Israeli Wine-Tasting Festival is a major event on the calendar of kosher wine enthusiasts, attracting 15,000 people, some 30% of whom typically come from abroad.

Celebrating its 25th anniversary, the International Klezmer Festival (www.klezmerf.com or for information, 011-972-4-6927509) fills the stone buildings and winding alleys of Safed with music in August. Safed, in the Galilee, is known as Israel’s mystical town, making it a charming setting for klezmer. “With its beautiful streets and history of Kabbalah, Safed has a very special energy, and when it is brought to life with music, it takes on a really special atmosphere,” said Chanan Bar-Sela, the festival’s artistic director.

The festival will feature eight stages with different acts starting on the hour. At a “Klezmerim for Kids” stage, children can try klezmer instruments and watch demonstrations of unusual instruments. Youngsters can also enjoy a magic show, storytelling and plays. Adults can take part in workshops and music-themed tours. The finale of the festival will take place at Yad Vashem (www.yadvashem.org) in Jerusalem, where performers will pay tribute to the music and musicians lost in the Holocaust.

Entrance to the International Klezmer Festival concerts is free, thanks to national and local government funding. The festival will begin on August 20 and run until August 25 in central Safed, with shows from 1 p.m. daily. Performances are open to all. There are also jam sessions where members of the general public can play. The festival will be followed by “Clarinet and Klezmer in the Galilee,” a seminar and master class given by prominent Israeli klezmer musician Giora Feidman.

Jazz enthusiasts can catch 75-minute performances each day of the Red Sea Jazz Festival (www.redseajazzeilat.com.) The four-day event, which starts on July 30, presents some 32 performances by 11 international and 10 local groups, playing in various indoor and outdoor locations in the resort city of Eilat. Ticket prices have not yet been set. Stages are erected in some of the most stunning locations in the resort city.

“For me, it was all about the chance to bring together different things I love,” said Micha Grin, a Londoner who attended last year’s festival. “I got to do water sports during the day, enjoy kosher dining out, which I wouldn’t at a music festival outside Israel, and take advantage of the great performances.”

At nearly all performances, audiences have a view of the Red Sea as they enjoy the music. “We really try to use the surroundings to contribute to the atmosphere of the event,” said festival spokesman Yaron Cohen.

Red Sea Jazz, which is in its 26th year, last year began running a winter festival, as well.

From June 6 to 14, Jerusalem’s Old City walls will turn into giant screens for cutting-edge art created from light. The Jerusalem Light Festival (www.lightinjerusalem.org.il) will feature light-themed installations from around the world. Some will be static; others will be animations designed to bring a smile to tourists’ faces. For example, the star of last year’s festival was “Meir,” a 10-foot projection who was constantly trying to climb the city walls.

In addition to light installations, the festival will feature shows and performances from around the world, which will take place at outdoor venues across the Old City from nightfall until the early hours of the morning. Most of the events are free; others cost about $20. One of the biggest acts will be Mayumana, the massively successful Israeli dance act that has been widely compared to Stomp, Cirque de Soleil and De La Guarda. The troupe blends visual arts, dance and rhythm into its acts and has performed for more than 5 million people since its formation in 1996.

Not only does the festival create a fun experience for visitors, it also helps the Jerusalem Municipality solve a serious problem: The Old City is simply not large enough to contain increasing pedestrian traffic during peak season. “We hope to get 10 million tourists a year visiting Jerusalem within 10 years, but the Old City is small,” said Elad Kandel, festival producer and municipal tourism official. “By lighting it up, we enable it able to receive visitors for more hours of the day and increase its capacity.”

You cannot find a much grander setting for performances than the ancient Jewish fortress of Masada. From June 7 to 12, opera enthusiasts will gather there for the third annual Masada Dead Sea Opera Festival (www.carmen-at-masada.com). The prices vary based on the festival package chosen.

The centerpiece will be Georges Bizet’s “Carmen,” in which a free-spirited gypsy, Carmen, sings about freedom as she falls in love with the soldier José and then with Escamillo, the toreador.

The opera is led by Israel Opera conductor Daniel Oren and stars Georigian mezzo soprano Anita Rachvelishvili. The production involves 2,500 people, 750 of whom will perform onstage. The set requires some 30 tons of equipment to be flown in from abroad.

In addition to “Carmen,” festivalgoers can enjoy performances in a variety of musical styles at Masada, including appearances by Israeli singer-songwriter Idan Raichel. The musician is renowned for blending different genres, from classical to Sephardic, in his Idan Raichel Project.