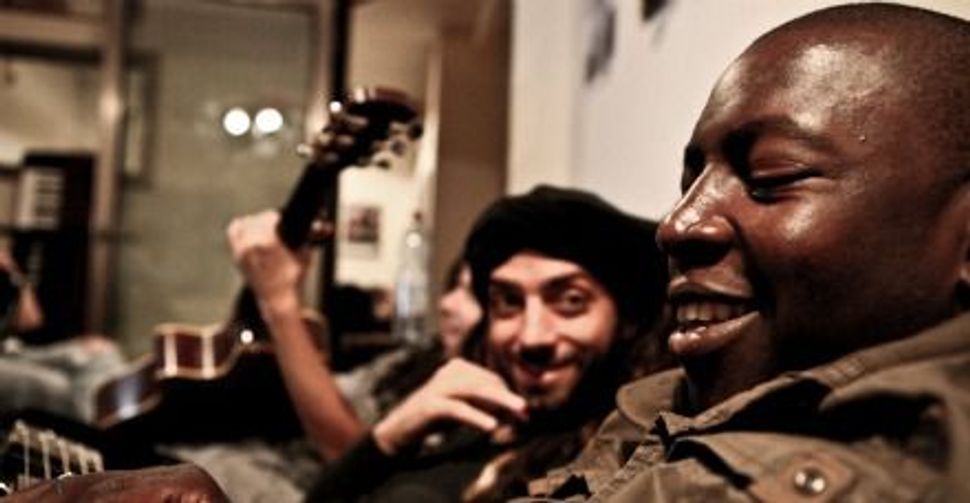 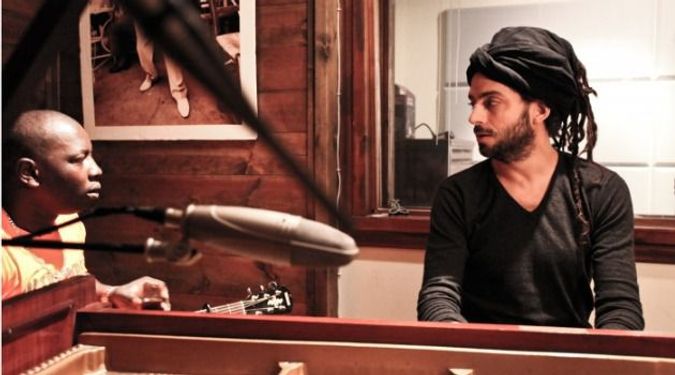 Musical Meld: Not every cross cultural collaboration pans out as well as the team-up of Idan Raichel and Vieux Farka Toure. Image by nitzan treystman

When I heard that a West African-Israeli collaborative venture called the Touré-Raichel Collective was going to be performing this month at City Winery, an upscale venue in lower Manhattan, I had serious misgivings. Was I curious? You bet. Was I optimistic? Not in the least.

My wariness had nothing to do with the band’s hyphenated headliners. Touré is Vieux Farka Touré, son of the late world-music icon Ali Farka Touré. Touré père, a Songhai guitarist from the vast northern region of Mali that was recently seized by nomadic rebel and Islamist forces, played an updated version of traditional Malian music that sounded to many Westerners like an exotic form of the blues. Touré fils might lack some of his father’s gravitas — the elder Touré cut his teeth on Songhai spirit possession music, and he never lost that supernatural intensity — but he may be an even more gifted guitar player.

Raichel, meanwhile, is Idan Raichel, an Israeli pop star with extremely wide-ranging tastes. Though strongly marked by the Middle Eastern vibe that characterizes so much Israeli music, Raichel’s work also draws on Latin American and African sounds, and the keyboardist and composer has worked with artists from Colombia to Cape Verde.

So what, you might ask, could possibly go wrong? In a nutshell, plenty.

African music covers a ridiculously large amount of territory, both geographic and stylistic. Collaborating happily with Rwandan or Ethiopian musicians, as Raichel has done in the past, does not guarantee success when attempting to mate (musically speaking, of course) with a master of the Malian desert blues. And while some people see broad relationships between Jewish and African music, I’m not so convinced.

Some artists, like the Israeli-born wind player Oran Etkin and the American guitarist Jeremiah Lockwood, have managed to combine Jewish and West African elements with varying degrees of success. But I’ve always thought of those experiments as curiosities rather than as proof of general aesthetic compatibility. As a recent performance by the all-female Guinean drum ensemble, Nimbaya, confirmed, large swaths of African music have nothing whatsoever to do with any kind of Jewish performance tradition. (The group performed as part of the family-oriented “Just Kidding” series at Symphony Space in New York, and the sight and sound of a dozen women beating the hell out of a bunch of djembes and xylophones elicited squeals of delight from the underage crowd.)

I was also not entirely reassured by the Collective’s media-friendly back story. Raichel and Touré met by chance at a German airport in 2008. Raichel wrangled an invitation to play keyboards with Touré at a show in Spain, and the two subsequently performed together at the Tel Aviv Opera House in 2010. That, in turn, led to “The Tel Aviv Session,” an impromptu recording of original songs employing Malian rhythms and Israeli melodies — songs that now form the basis for the band’s live performances. The group also includes Malian calabash player Souleymane Kane and a rotating cast of Israeli electric bassists, making for an evenly split team of Israeli Jews and Malian Muslims.

Charming? Certainly. But two gigs and a studio jam session do not a marriage make, and the possibility of vague, world-music noodling seemed very real.

Within a few seconds of taking the stage in New York, however, the Collective did much to assuage those fears. The quartet was remarkably cohesive, especially when it stayed close to Touré’s Malian roots. It so happens that Raichel used to play along with Ali Farka Touré’s recordings while serving in the Israeli army band, and he therefore came pre-loaded with a Touré-friendly keyboard style.

By reaching into the piano and dampening its strings, Raichel was even able to mimic the chunky, funky sound that Vieux Farka Touré sometimes extracts from the lower register of his instrument — a sound inspired, no doubt, by the traditional ngoni lute that his father played as a young man.

That made the first half of the show a very Malian affair, which was nice, since Malian music is some of the most righteous stuff around: driven by infectious rhythms, anchored by hypnotic bass lines and shot through with elaborate improvised melodies. For the most part, Raichel played the role of deferential accompanist, accommodating himself to Touré’s distinctive voice while adding just a touch of his own jazzy, Near Eastern persona to the mix.

Admittedly, things did fall apart somewhat when the Israeli contingent began to assert itself more and a string of guest artists descended on the stage. The Malian singer Awa Sangho was delightful, but Oran Etkin barely had time to warm up his clarinet, and Alex Terrier’s slickly executed soprano sax licks seemed entirely out of place. Yet, if the group lost some of its drive and focus, the evening never quite devolved into the kind of train wreck that can occur when well-meaning musicians from different worlds extend the hand of friendship only to discover that they do not, in fact, have much in common.

That might be because Touré, like Raichel, was willing to venture out of his own musical sandbox and play in someone else’s for a while. But it also has something to do with the fact that if Raichel and Touré don’t speak precisely the same musical language, they do speak mutually intelligible ones. And there is good historical reason for that.

The Songhai Empire that once ruled northern Mali was a major sub-Saharan Islamic state where both Arab and Jewish traders did brisk business. (Its sizable Jewish community was driven underground in the 15th century by an Islamic version of the Inquisition, but the Malian historian Ismael Haidara, founder of an organization called Zakhor — Hebrew for “remembrance” — has traced the Jewish origins of many Muslim families in the region, including his own.) Extensive contact with the Arab world left a deep imprint on Malian music in general, creating similarities that are easy to hear, from keening, melismatic vocals to filigreed melodic ornamentation as finely etched as Arabic calligraphy.

Such musical features also are common to traditional Middle Eastern and North African Jewish music, and for the same reason, just as they are to the melting pot of Arab and Near Eastern Jewish music that is modern Israeli pop. “It was really moving to see every person in the Opera House standing and clapping for a Muslim artist who was coming to Israel to play his music, not afraid of any boycotts. It wasn’t a political statement, it was a musical one,” Raichel told The Jerusalem Post. In fact, it was both: The Touré-Raichel partnership is a symbol of how much the global phenomena we call Jewish and Islamic culture have in common, and of how harmoniously they can combine when given the chance.

So in the end, my qualms about the Collective — that it might be weak at best, or a well-meaning artistic catastrophe at worst — proved unfounded. Instead, the concept worked surprisingly well, both because the big-eared musicians behind it are clearly trying hard to accommodate one another and because they actually have something to build on.

Alexander Gelfand is a regular contributor to the Forward, a recovering ethnomusicologist and a lapsed West African drummer.