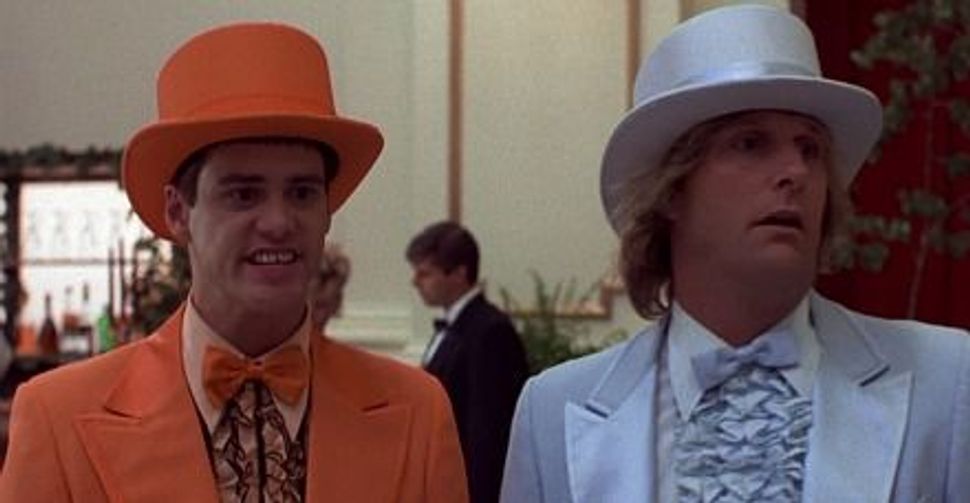 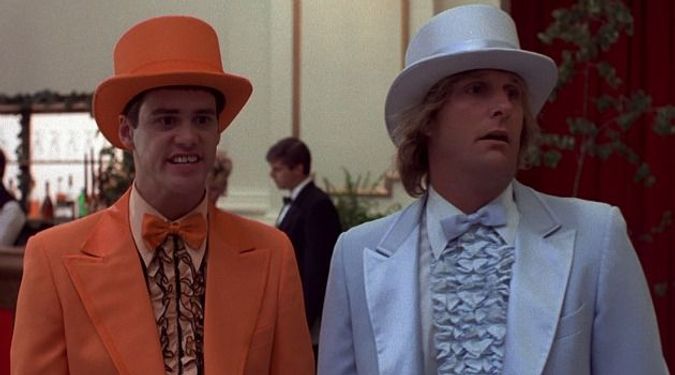 Dumb and Dumber-er: Philologos hunts for what determines the usage of the comparative form of adjectives. Image by new line cinema

Rabbi Richard Hammerman of Caldwell, N.J., writes about my column of May 4, in which I said it was “pleasanter” to contemplate the origins of the expression “finger-lickin’ good” than it was to contemplate an Iranian nuclear bomb:

“I always enjoy your columns and learn something new and often useful from them. But ‘pleasanter,’ not ‘more pleasant than’? Perhaps you were caught up in the slangy context of the article.”

Was it wrong of me to say “pleasanter”? Rabbi Hammerman’s question got me thinking about an issue I had never thought about before. Is there any rule that tells us when the comparative form of an adjective is made by adding “-er” and when by being preceded by “more”? If there is, I’ve never come across it in any book of English grammar or usage. And yet every language has many rules that aren’t conspicuous enough for the grammar books to mention or for native speakers even to be aware of. A high percentage of the sentences we utter are partly formed by such unconscious rules, in the absence of which we would be forced to make constant decisions that would slow down our speech considerably. What, then, is the rule governing “pleasanter” verses “more pleasant”?

Did a rule suggest itself from these examples? Indeed, it did. It went: Comparative adjectives are formed with -er from all one-syllable words, such as “quick,” “slow,” “soon” and “late,” or from words of two syllables ending in “y,” such as “sunny,” “cloudy,” “happy” and “merry.” In all other cases, they are formed by putting “more” in front of them. Such a rule explains why we don’t say “He’s more quick than I am,” “That joke is more funny,” “She’s become depresseder over the years” or “That’s the methodicaler approach.” We automatically avoid such usages without having to think about them.

Since “pleasant” isn’t a one-syllable word, or a two-syllable word ending in “y,” Rabbi Hammerman would appear to be right: I should have said “more pleasant” rather than “pleasanter.” But why, then, do I rebel against this conclusion and still feel that “pleasanter,” while not excluding the possibility of “more pleasant,” is perfectly good English? Can it be that the rule I have formulated is inexact? Are there more-than-one-syllable adjectives not ending in “y” that take “-er,” too?

But what’s the rule that tells us which two-syllable adjectives not ending in “y” can take “-er” and which can’t? As hard as I tried, I couldn’t come up with one. It’s true that certain sound patterns seem more likely to produce such words. “Simple,” “humble,” “subtle,” and “gentle” all have the same ending, as do “mellow,” “shallow” and “hollow” — but “quiet,” “handsome,” “stupid,” “clever” and “pleasant” do not. If we say “quieter,” why can’t we say “silenter”? And if we can say “nimbler” instead of “more nimble,” why can’t we say (we never would) “agiler” instead of “more agile,” or (we wouldn’t either) “Farmer Brown’s land is fallower than Farmer Jones’s,” just as we say, “The water at this end of the lake is shallower than at that end?” Perhaps one of you can figure it out. I haven’t been able to.

Can it be that there simply is no rule for the comparative form of two-syllable adjectives not ending in “y,” but simply a relatively small number of such words that can take “-er,” each of which has to be learned as a case in itself from the experience of hearing other people use it? And is the only reason that “pleasanter” sounds right to me and not to Rabbi Hammerman that I have heard others use it and he hasn’t? Or is there some other factor at work here that I can’t put my finger on? If you have any thoughts about it, let me know.