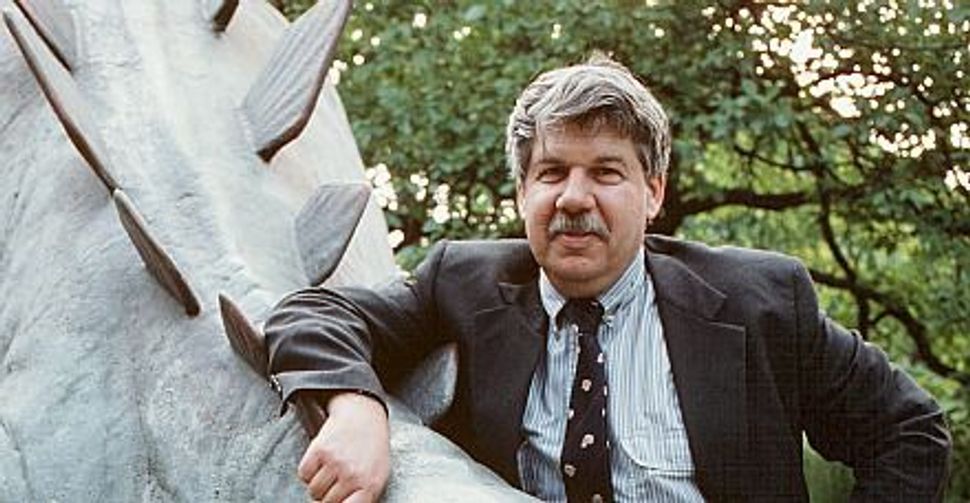 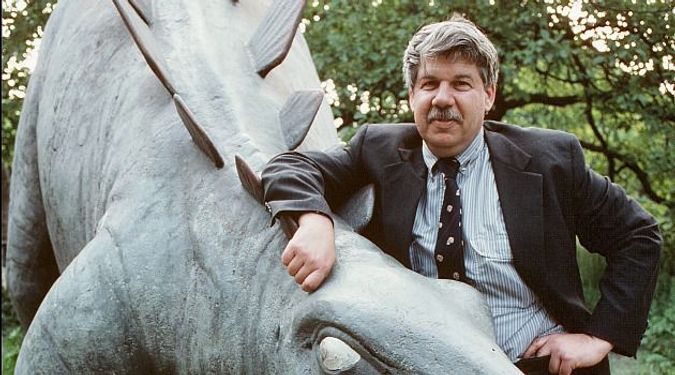 Fear and Fascination: Stephen Jay Gould was seized with fear, and fascination, when he first saw the giant dinosaurs at the American Museum of Natural History. Image by getty images

May 20 marks the 10th anniversary of the death, at age 60, of evolutionary biologist and popular author Stephen Jay Gould. That’s an excellent excuse to relish seven paperback reprints of his work, out last fall from Harvard University Press. Included are “Dinosaur in a Haystack: Reflections in Natural History” and “I Have Landed: The End of a Beginning in Natural History.” Gould’s books are distinctive for their moral concerns, which are derived directly from the author’s strong Jewish background.

One essay in “Dinosaur in a Haystack” describes how in 1944, at age 3, Gould understood World War II as a personal “fight between my daddy and a bad man named Hitler.” After his father, court stenographer Leonard Gould, returned from military service, he took his son to New York’s Museum of Natural History, where they explored the collection of dinosaur skeletons. Gould had a shock that determined his future career path, as he later told one interviewer, when a “man sneezed, and I thought the tyrannosaurus had come to life and was about to devour me. But at that moment, the fear — I just let fascination creep in.”

Fear and angst would also draw the young Gould to an item on his parents’ bookshelves: Hitler’s “Mein Kampf” in Ralph Manheim’s 1943 translation. Gould felt anguish at merely touching this volume, as “Dinosaur in a Haystack” explains.

My parents bought [“Mein Kampf”] before my father left to join the battle. Throughout my youth, I stared at this volume on my parents’ shelves, taking it down now and again — more to experience the frisson of touching evil than from any desire to read.

Both instances of childhood trepidation would resonate through Gould’s life, as he became the quintessential biologist-after-Auschwitz, marked by the creative anxiety to understand and explain a scary world where either dinosaurs ruled the earth or the more recent horror of the Holocaust could occur. In the same chapter, Gould addressed how in the notorious 1942 Wannsee Protocol, in which plans for the Holocaust were drawn up and rationalized, Adolf Eichmann misused the Darwinian term “natural selection” to describe how Jews should be, and indeed would be, massacred. Gould’s life was based on the beauties of science and on the particular appeal of how Charles Darwin’s discoveries correspond to realities in the natural world. He reacted violently to finding Darwin cited in this context, addressing the reader:

Perhaps you do not see the special horror of this line (embedded, as it is, in such maximal evil). But what can be more wrenching than the violation of one’s own child, or the perversion for vicious purpose of the most noble item in a person’s world?… What could be more unnatural, more irrelevant, to Darwin’s process, than the intricately planned murder and starvation of several million people by human technology?

In Gould’s agonizingly heartfelt plea, the trauma is fresh, and the metaphor of child rape is aptly violent for how Nazi pseudo-science was used to support policies of extermination. From his father’s professional experience in courtrooms, Gould possibly absorbed the sense of justice that permeates his essays, making them about human morality from an ethically Jewish point of view as well as about natural science.

This optic was essential because for Gould, the Holocaust was not a remote historical tragedy. In “I Have Landed,” he observes: “I need hardly mention the searing events of my parents’ generation to remind everyone that current acceptance [of Jews in society] should breed no complacency.” Although he was a music lover and a fan of Johann Sebastian Bach, Gould notes, “I recoil from Bach’s anti-Semitic Passion texts because they express the worst aspects of our common nature, and because these words have wreaked actual death and havoc.” In another recently reprinted book, “Leonardo’s Mountain of Clams and the Diet of Worms,” Gould asks how it is possible that throughout European history, cultivated Germans could “promote such iniquity [of anti-Semitism] of their own free will (and with apparent moral calm and intensity of supposed purpose)?”

Convinced that if it happened once, it can possibly happen again, Gould composed a loving tribute in “I Have Landed” to his maternal grandparents, Irene and Joseph Rosenberg, who arrived at Ellis Island in 1901. Evoking their attempts to adapt in the New World, including when Irene Rosenberg won a contest on Yiddish radio by guessing correctly that America’s fattest president was William Howard Taft, Gould found larger meaning in his forebears’ early struggles. As his grandparents’ children also toiled at humble jobs to pay for his own education, Gould suggests that his family’s intergenerational progress “somehow mirrors the larger way of all life.”

To savor this familial progress requires watchfulness, and “The Jew and the Jewstone,” another chapter in “I Have Landed,” explores a 1641 German handbook of medical remedies, a prior example of pseudo-science used to foster racial hatred. The so-called Jewstone, really the spine of a fossil sea urchin found in abundance around the Holy Land, was used to treat ailments. The handbook’s author parenthetically claims that “by his secret rules, [the Jew] is granted permission to kill the goyim, that is the Christians, with impunity, without censure, and without pangs of conscience.” Gould realized how such claims “often allowed evil people to impose a greater weight of suffering upon the world by misusing the technological power that flows from scientific advance.” He was optimistic, however, that “new technology might best speed the gospel of peace and prosperity through better knowledge allied with wise application rooted in basic moral decency.”

The reprinted volumes from Harvard University Press reflect the voice not just of a scientist, but also of a mensch. Gould addresses the nonscientific but essential question of how to ensure that the Holocaust does not recur. He recommended “vigilance and humility,” the latter being especially important for scientists. Gould quoted from the book of Isaiah to evoke his vision of a world in which “our human wolves would dwell in peace with lambs, for ‘they shall not hurt nor destroy in all my holy mountain.’”

This peaceable vision was marred last year, when The New York Times reported a controversy over another Gould book. “The Mismeasure of Man,” originally published in 1981 and revised in 1996, cites one 19th-century Pennsylvania scientist who, Gould charged, measured skulls erroneously and misused data to calculate human intelligence. Gould was repelled by the comparative intelligence testing of races. The latter pseudo-science, he explains, was used to keep immigrants — not unlike his own grandparents — from entering America. In 2011, a group of scientists in Pennsylvania re-measured some of the same skulls and claimed that the original study was accurate and unbiased. The Times article, accompanied by a gloating editorial, quoted one Columbia University scientist, who called Gould a “charlatan.”

This harsh term is also applied to Gould on far right-wing websites, by anti-Darwinians and anti-Semites, so it is fortunate that John Horgan, a writer for Scientific American, leaped convincingly to the late author’s defense. If Gould made a mistake, as scientists often do — even Einstein and Newton were not always correct — his precious legacy as a writer is part of the shelf of wisdom literature for our time.