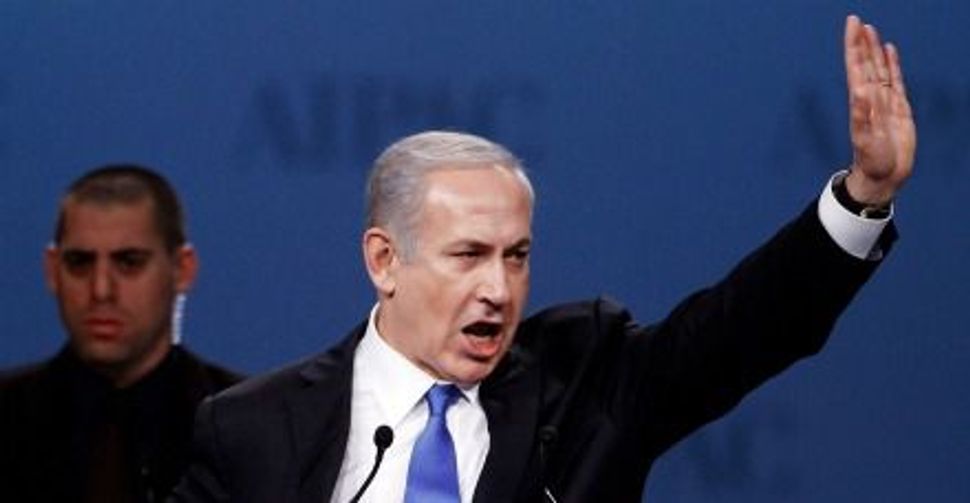 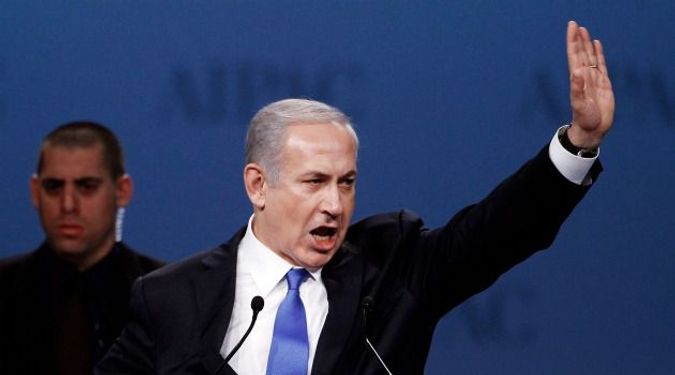 Not Yuck, Yok! A columnist blasted Benjamin Netanyahu for failing to deal with the issue of West Bank settlements. He didn?t mean to say it was gross. Image by getty images

The daily English edition of the Hebrew newspaper Haaretz, which also appears in an Internet version, has always struck me as a prodigious feat of translation. Day after day — or, more precisely, night after night — a battery of anonymous translators, working like galley slaves under enormous time pressure, takes the Hebrew paper, itself in the process of going to press, and puts a significant part of it into fluent, readable and accurate English in time for it to make the early morning delivery trucks. Hats off to them.

And yet, working under such conditions, the Haaretz translators inevitably commit some bloopers now and then. An amusing one occurred in the May 14 paper, in a column by Akiva Eldar. The pro-Palestinian Eldar, who criticized the Kadima party for joining Benjamin Netanyahu’s coalition government without insisting on the revival of the stalled Israeli-Palestinian peace talks, was made by his translator to say: “There is no mention [in the Kadima-Netanyahu agreement] of freezing building in settlements or of tearing down the West Bank outposts. And the Arabs’ peace plan — yuck!”

Was Eldar declaring that the Arab peace plan was yucky? Actually, no. The word mistakenly translated as “yuck” was the Hebrew yok — an exclamation meaning “There’s no such thing” or “Fuhgeddaboudit!” As I wrote in passing in a column many years ago, yok comes from Turkish Malta yok, “There is no [such place as] Malta,” which I explained then as follows:

“In the year 1645, the story goes, the Ottoman sultan Ibrahim the Mad ordered his fleet to attack the Christian island of Malta in the western Mediterranean. Upon receiving the order, however, Ibrahim’s chief admiral, fearing such a move would end in disaster, placed a candle on his naval map, allowed the wax drippings to fall on the little island until they covered it, declared to his adjutants, ‘Malta yok,’ and sailed off to attack the Venetians in Crete instead.”

I didn’t bother to inquire at the time whether there was any truth in this story — which, although it is quoted in many places, sounded none too likely. Now, a little research has convinced me that it’s indeed legendary. Malta is a small island, but the Turks knew of it only too well, having invaded it 80 years earlier, in 1565, and been driven off by its rulers, the Knights Hospitallers, with 30,000 dead. It was one of the most crushing defeats in Turkish military history, and telling your officers less than a century later that no such place existed would hardly have cut the mustard with them.

Nor, in 1645, did a Turkish fleet set out for Malta. What did happen was that a year previously, Maltese warships had attacked a Turkish convoy of pilgrims on its way to Mecca, killing or enslaving all its passengers, and the enraged Turks used this as a pretext for going to war against their traditional Mediterranean rivals the Venetians, accused by them of aiding the Maltese. Raising an armada of more than 400 ships and 50,000 soldiers, they spread rumors that their target was Malta so as to throw the Venetians off-guard, and then they sailed for Venetian-governed Crete, which they conquered after a bitter campaign.

The conclusion would seem to be obvious: The story of Malta yok began as a joke or tall tale pretending to explain why the Turks never launched their rumored 1645 assault on Malta. Strengthening this assumption is the fact that the story exists in other versions, too. According to one, a Turkish squadron sent to reconnoiter Malta was unable to find the island and reported back to the Sultan in Constantinople that it didn’t exist. According to another, a similarly incompetent Turkish sea captain, who far from being told to attack Malta had been dispatched on a good-will mission there, uttered the words. Clearly, we are not dealing with a real historical event.

Was the story originally told by the Turks about themselves? Or was it told about them by non-Turks like Russians and Greeks, who have the expression Malta yok in their languages, too? This depends on which version was the original one. If it was that of the clever Turkish admiral who blotted out Malta on the map to avoid a second disastrous landing there, the tale probably started with the Turks. If, on the other hand, it was one of hapless Turkish navigation, it was in all likelihood invented by someone else.

In any event, Hebrew, into which Malta yok was probably introduced by Ladino speakers from Turkey or the Balkans, is, as far as I know, the only language in which the “Malta” is generally dropped, leaving only the “yok.” Is there any chance that Akiva Eldar will ever write a column in praise of the Netanyahu government? Yok! It’s a word used less by younger Israelis than by the generation of their parents, which may be why Haaretz’s translators didn’t recognize it, but it has a fine old history and I’d hate to see it disappear.