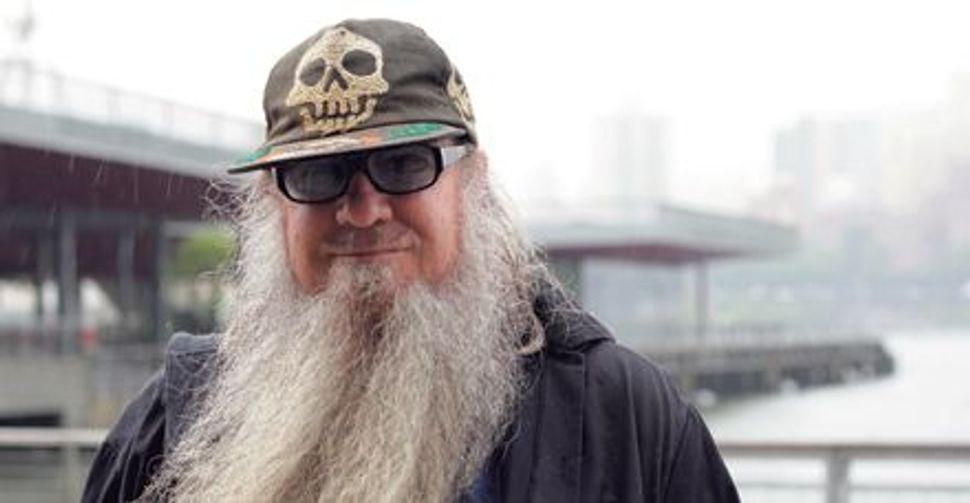 The president of the New York Tattoo Society is an unlikely figure to launch what may be the most ambitious publishing venture ever to cover the Jewish Lower East Side. Clayton Patterson, a non-Jew whose long beard could be mistaken for that of a biblical patriarch, is the editor of the three-volume “Jews: A People’s History of the Lower East Side,” a project now nearing completion.

Patterson, who has been a fixture of the neighborhood since moving to New York City in 1979, has been working on the book since 2005. While the Lower East Side is known for having been home to millions of Jewish immigrants in the early 20th century, his book focuses on the life of the neighborhood after most of those immigrants left, and on the effects of recent gentrification.

“The genius of most of America was attached to cheap rent and an inexpensive lifestyle,” Patterson told the Forward on a rainy Thursday afternoon. “Whether it be Madonna or Jackson Pollock or Jimi Hendrix or Rabbi Moshe Feinstein — all of these people were able to develop their ideas and their theories and their work because they had the time to deal with it. At $3,000 a month, you just don’t have time to grow and develop.”

In Patterson’s sprawling and raucous 1,300-odd pages, Feinstein and other legendary Jewish figures rub shoulders with lesser-known characters. Someone looking for Allen Ginsberg might stumble upon Lionel Ziprin, a poet who studied the Zohar, fell in love with the same woman as Marlon Brando, entertained Thelonius Monk, received a flattering letter from T.S. Eliot and was the grandson of mystic rabbi Nuftali Zvi Margolies Abulafia. Ziprin’s friend was musicologist Harry Smith, best known for his seminal Anthology of American Folk Music, who donated the world’s largest paper airplane collection to the Smithsonian National Air and Space Museum.

A still unknown Philip Glass is described as directing movers to carry musical equipment to and from his sixth-floor walk-up. Educational Alliance students, like sculptor Louise Nevelson and artist Ben Shahn, make cameo appearances, as do film titans Louis B. Mayer and Samuel Goldwyn, on their way to transforming American popular culture.

“I’m not sure if most Jews are aware of how diverse the Jews are,” Patterson said of the characters that fill his history. “Individuals who came through here changed the history of America countless times.”

Though Patterson finished compiling most of the book’s content in 2007, he has been trying to raise money for its design, printing and distribution. In November 2011 he succeeded in netting $13,000 from 72 backers by using the fundraising website Kickstarter.com, and now he is in negotiations with printers to produce the work. He hopes to have it completed in the next couple of months.

Patterson distinguishes his project from the landmark book “World of Our Fathers: The Journey of the East European Jews to America and the Life They Found and Made,” published in 1976. He said that the work, by Irving Howe with principal researcher Kenneth Libo, had a narrative point of view, while his own volumes allow more recent voices to speak for themselves. And speak they do: In about 160 essays, artists, rabbis and writers cover subjects ranging from shtieblekh to the shvitz.

The first volume, which focuses on the area below Delancey Street, was co-edited by Yeshiva University sociologist Mareleyn Schneider, who also contributed articles on such subjects as collector and archivist Danny Stein, late congressman Leonard Farbstein, and Jewish recipes using organ meats and “other awful animal inedibles.” Another contributor is Suzanne Wasserman, director of the Gotham Center for New York City History at the City University of New York’s Graduate Center. “I can’t think of anything like it, with its mix of memoir, nonfiction and interviews,” she said of the book. “It’s got a little bit of everything.”

The work that Patterson has done as a photographer, artist, local historian, documentary filmmaker, activist, collagist, curator, archivist and organizer is too vast to fit into any one category. The embroidered baseball caps that he has designed with his partner, Elsa Rensaa, have been worn by artist David Hockney, actor Matt Dillon and filmmaker Gus Van Sant, and he decorated a jacket for Mick Jagger. His Essex Street loft — once a sewing factory — contains hundreds of thousands of photographs as well as collections of street stickers and ephemera such as empty heroin bags. As an asphalt anthropologist, he documents graffiti as though it were his native tongue.

Patterson, 63, grew up in Calgary, Alberta, where he studied art and design, taught in a small country high school and once brought a sheep to class to show how a sweater is made. After moving to New York, he gained notoriety for filming the 1988 Tompkins Square Park Riot, in which police clashed violently with protesters and park habitués.

He has also had a longtime involvement with the neighborhood’s Jewish community. In the 1990s, Patterson poured his energy into helping the 8th Street Shul, an institution that welcomed an eclectic group of worshippers who may not have felt accepted in a mainstream Orthodox congregation. For his role in helping to save the building, Patterson was elevated to the synagogue board. “Meshuga, right?” he asked during our interview.

This interest is reflected in his history. It includes entries on institutions like the Congregation Chasam Sopher, on Clinton Street, whose eternal light used to be turned off to prevent burglary. The book also includes a history of the Forward building at 175 East Broadway, by Yeshiva University librarian and curator Shulamith Berger, titled, “The Forward’s Edifice Complex.” In early days, when the office was on Duane Street, the reader learns, Forward typesetters “brought their lunches from home and hung them on sticks over the gas fixtures. As the food warmed up, smells of Lithuanian, Galician, and Romanian cooking filled the shop.”

Over the years, the Lower East Side has continued to exercise a tremendous pull on the popular imagination. Wasserman captures such sentimentalism in describing Sammy’s Roumanian Steak House: “Customers get to relive the poor Eastern European immigrant past in an expensive restaurant on one of the East Side’s most not yet gentrified streets…. The Lower East Side became a site of Jewish identification, eventually even for those who had never lived there.”

Patterson, meanwhile, has been conjuring additional topics for future volumes, from unions to a Jewish herb seller he runs into on First Avenue. He would also like to publish a volume about Puerto Ricans on the Lower East Side. Ambling through the neighborhood recently, he strolled over to a printer on East Ninth Street, carrying a mock-up of his latest project: a coloring book of Lower East Side legends, of which he may well be one.

Gary Shapiro contributes to the Heard & Scene page of The Wall Street Journal.