‘Girls,’ Sex and the All New JAP 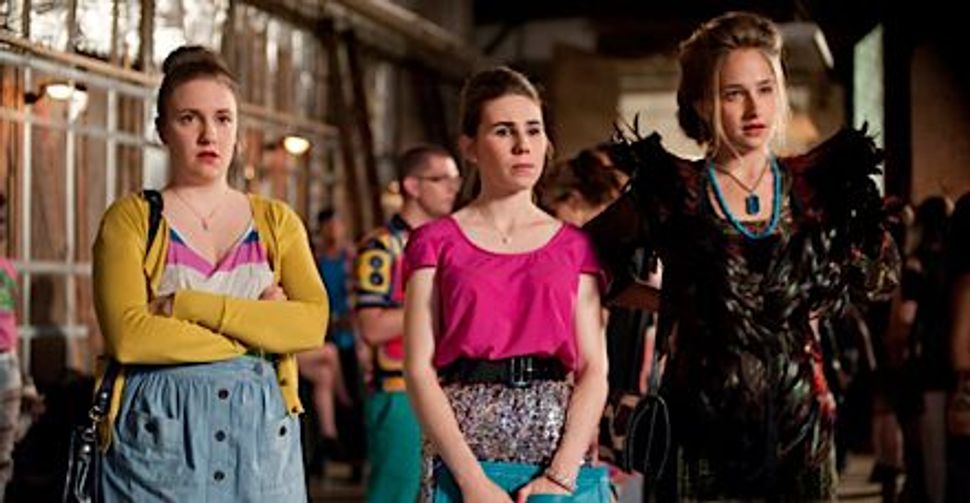 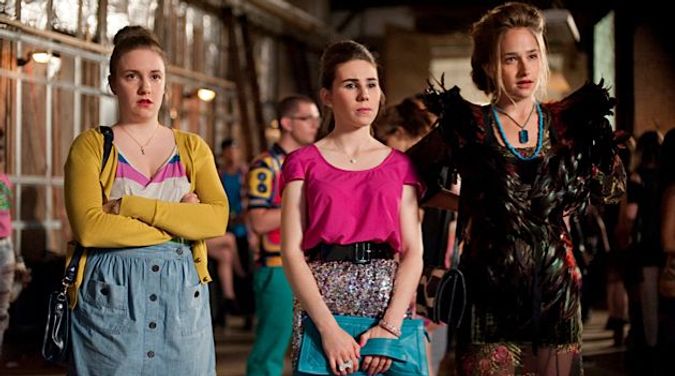 Not So Simple: Shoshanna Shapiro, center, played by Zosia Mamet, is more than the sum of her allowance. Image by JoJo Whilden/HBO

Within her first two minutes on screen, it’s evident that Shoshanna Shapiro is a Jewish American Princess. From perfectly coiffed hair to a pink Juicy Couture tracksuit to her admission that her parents are paying $2,100 a month for her Nolita apartment, Shoshanna, one of the four protagonists on the HBO show “Girls” — which finished its first season June 17 — seems like the latest incarnation of a long-running stereotype. She says “obvi” more often than the Federal Communications Commission should allow, and when she’s not complaining that her outfit is “at least 6 months old,” she’s lazing around her plush apartment. When she accidentally mistakes crack for weed in the season’s seventh episode (“Welcome to Bushwick a.k.a the Crackcident”), a mutual acquaintance, Ray, is annoyed at being left to watch over her. Though he’s only just met Shoshanna (and she’s ridiculously high), he can tell what kind of girl she is. “I’m not a f**king JAP day care,” he says. And can you blame him?

Some critics have dismissed Shoshanna as a flat character, or “comically overbroad,” as Gawker’s John Cook wrote. Others go further, seeing something “malicious” in her portrayal. In comparison with the other three leading characters on “Girls,” Shoshanna “seems to be sitting around, waiting for them to show up and use her as a punch line,” Miriam Krule wrote on Jewcy. Such criticism, however, isn’t entirely fair. Along with others on recent TV shows, Shoshanna emerges as a more emotionally complex and empathetic character than her one-dimensional pop cultural forebears. Indeed, she marks a critical evolution of the JAP stereotype.

To understand the significance of Shoshanna, deftly portrayed by Zosia Mamet, it’s important to consider the history of the JAP character in books, TV and film. Marjorie Morgenstern of Herman Wouk’s 1955 novel “Marjorie Morningstar” and Brenda Patimkin of Philip Roth’s 1959 novella “Goodbye, Columbus” set the stereotype in postwar America, though neither book used the term “JAP” specifically. But both characters were depicted as materialistic, vapid and dependent on their fathers’ finances, qualities that became embedded in subsequent portrayals.

Over the next decade, the JAP image became so pervasive that in 1971, Julie Baumgold’s article “The Persistence of the Jewish Princess” appeared on the cover of New York magazine. Baumgold defined Jewish princesses by their sense of entitlement, their self-absorption and their overconfidence in their subpar beauty. “For one thing, she expects,” Baumgold wrote. “Clops and blows come from Above, but still she expects. It isn’t mere hope; it is her due.”

In addition to being spoiled daddy’s girls, JAPs were portrayed as obnoxious, loud and lacking sexual appeal. JAP jokes proliferated, reinforcing stereotypes about resistance to cooking and housekeeping, incessant whining and indifference to sex. Whatever once made these princesses desirable to Roth’s and Wouk’s male characters had by this point disappeared. Perhaps, overwhelmed and repulsed by their own overbearing mothers — as in Roth’s “Portnoy’s Complaint” — Jewish men, along with popular culture, viewed these women with sexual disdain.

Movies and television also played up the crass, one-dimensional JAP for laughs. There was Lila Kolodny (played by Jeannie Berlin) in the 1972 film “The Heartbreak Kid,” a boorish, unpassionate bride whose husband left her while she was incapacitated by sunburn during their honeymoon. Elaine Lefkowitz (played by Dinah Manoff) of the late ’70s to early ‘80s TV show, “Soap,” was an obnoxious, demanding and bossy princess whose father pawns her off on an unsuspecting, and then repulsed, husband. Gilda Radner’s recurring character Rhonda Weiss on “Saturday Night Live” was a vapid ditz who spoke with a grating Long Island accent and was obsessed with presents from her wedding shower. Perhaps the television character most commonly associated with the JAP stereotype was Fran Drescher’s Fran Fine on the 1990s show “The Nanny.” Fran’s nasal whine, love of shopping and general lack of decorum drove the plots and jokes of the series.

At first glance, Shoshanna Shapiro is just the latest JAP doll on this long conveyor belt of stock figures. She is a major source of comic relief on the show, and is more of a caricature than any of the other characters. Her fanatical obsession with “Sex and the City,” and her declaration that her British cousin Jessa Johansson is “so f**king classy” for not being on Facebook, draw instant laughs. Yet each episode also reveals other layers to Shoshanna’s character that go beyond the stereotype. It’s not that she is any less of a princess as the series progresses; she still loves her clothes, her parentally funded apartment, and her Camp Ramah memories. But she also displays a vulnerability and earnestness that was notably lacking in previous JAP characterizations.

The evolution is especially apparent in scenes involving sex. A common stereotype was that Jewish American Princesses lacked all sexual feeling, or saw sex solely as a trade-off for the material comforts of marriage. And in fact, until the season finale, Shoshanna is the lone virgin on “Girls.” Her first sex scene is with someone she met at a Jewish sleep-away camp, and she is clad in a perfect set of high couture matching bra and panties. Yet Shoshanna’s virginity is a source of anxiety, shame and desire rather than an indication of disinterest. When her sexual advances are rejected because she is a virgin, Shoshanna squeakily responds, “I’m the least virginy virgin ever!” Though the line has a ridiculous, Valley girl quality to it that infuses the scene with humor, there is also emotional texture in Shoshanna’s insecurity. Sex is perhaps the one thing this princess doesn’t have, and wants more than anything else.

Shoshanna is not the only JAP on TV that goes beyond a flat, stock character. Rachel Berry on the TV series “Glee,” played by Lea Michele, is known for her self-involvedness, impatience and sense of entitlement. Rather than whine for a mink coat or a gold wedding band, however, Rachel uses these qualities to move closer to her goal of becoming a Broadway star. She makes good on her kvetching through commitment to her professional dreams.

On the cable show “Mad Men,” Jane Siegel is another recent example of the evolved JAP. Played by Peyton List, Jane oozes selfishness after her marriage to advertising agency partner Roger Sterling. She vacillates between behaving like a spoiled child and a frigid goddess, and as her marriage crumbles she demands a new apartment in exchange for a business appearance. But when it becomes clear that Jane desires a new home because she cannot bear the memories of her relationship with Roger, her desperation and regret become painfully sympathetic.

In addition to imbuing JAP characters with complexity, these depictions also represent a reclaiming of identity. With a tongue-in-cheek sense of humor, they go so far as to embrace materialism, entitlement and other princess qualities. Carrie Bradshaw of “Sex and the City,” though never formally identified as Jewish, bears some JAP signifiers: She is obsessed with shopping, hates the outdoors and doesn’t like to cook. None of these traits comes across as negative, but instead they are all presented in the context of Carrie’s humor, intelligence and sensitivity. Rather than force Carrie into the obnoxious and sexually unappealing stereotype of the past, these qualities shape her glamorous and whirlwind lifestyle. They are part of her charm and make her one of the most iconic characters in television history.

This is not to say that all of popular culture, or even television, has now embraced the evolved Jewish American Princess. Turn on Bravo, and every Jewish woman on a “Real Housewives” series seems like a living punch line for the corniest jokes. Materialistic, pampered and lazy, they embody the most obnoxious and obvious JAP traits. Ironically, it’s reality television rather than scripted that can’t seem to let go of the caricatures. Worse than grotesque, these one-dimensional women seem archaic.

Such outdated characterizations are doing everyone a disservice, and not just because they’re wrong. Depicting Jewish women in such crass ways is bad not only for Jewish women, but also for television. Even with many of the stereotypes intact, the JAP character can be emotionally layered and compelling to watch — a fact evidenced by Shoshanna Shapiro and her peers. The Jewish American Princess may be with us for a while, but that doesn’t mean she’s got to stay the same. We’ve just got to let her evolve.

Emily Shire is the chief researcher at The Week magazine and a freelance writer. Find her work at emilyshire.wordpress.com

‘Girls,’ Sex and the All New JAP