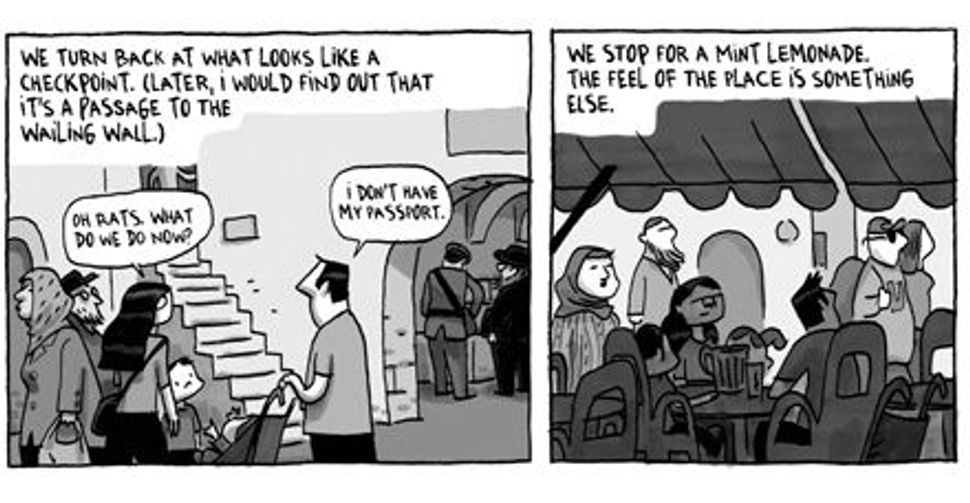 A city so religiously and historically intense that it’s got its own eponymous syndrome for visitors who flip out under pressure, Jerusalem is the unequivocal go-to destination for anyone wanting a look at the world’s epicenter of multi-faith fanaticism. An inspiration and a battleground for the religiously and, more recently, nationally inclined, Jerusalem has long attracted pilgrims from the three Abrahamic faiths who trek there to live, to pray, to eat and to conquer.

Chronicles of travels to the holy city are legion and have, over the centuries, become a distinct literary genre. A new and novel entry into this category is Quebecois cartoonist Guy Delisle’s “Jerusalem: Chronicles From the Holy City,” the first such chronicle told in graphic novel form. In it, Delisle, author of a number of fascinating visual travelogues to such places as Burma, Shenzhen and Pyongyang, takes a visual stab at his year living in Jerusalem.

Rendered in Delisle’s trademark variation on ligne claire, the visual style made famous by Hergé’s “The Adventures of Tintin,” the images carry the reader through the author’s quotidian experiences in the holy city. But Delisle isn’t a religious pilgrim — in fact, he’s an atheist who is more interested in history than in achieving revelation. As a result, his sketches of historical sites, which are often drawn in richer detail than most of the regular narrative panels, create engaging visual markers that dot the story.

But don’t delude yourself that Delisle is a steely adventurer, hungry for action. He spent a year in Jerusalem only because his wife, who works for the French nongovernmental organization, Doctors Without Borders, happened to be stationed there. While taking care of their two kids and leading occasional comics workshops, he documents their stay in the holy city.

One of the unusual aspects of Delisle’s story is that he and his family live out the year in the Arab East Jerusalem neighborhood of Beit Hanina. This fact should make it interesting, especially for Jewish readers who might be in unfamiliar territory. But the sad reality is that the East Jerusalem Delisle describes is actually kind of boring. In fact, he sums it up quite nicely in a conversation with an airport security agent who asks if he likes living there. “Not really, no,” Delisle says. “There’s no playgrounds, no cafes, nothing but garbage. I didn’t think Jerusalem would be like that. I’m disappointed, to tell you the truth.”

The reality that Delisle comes to understand is that Beit Hanina is in Jerusalem, but it’s not the Jerusalem he expected. The neighborhood is an ex-patriot shtetl in the Arab section with a sizable American and European population, but it’s a lot less livable than Pisgat Ze’ev, the settlement neighborhood across the street. The latter has a big mall and, to Delisle’s delight, shredded wheat, which he avoids buying because he doesn’t want to support the settlers. But as he leaves the mall, the sight of Muslim women in niqabs, loading up their cars, confounds him. This is but one of the many contradictions he finds in Jerusalem’s political, religious and cultural maelstrom.

One of the strange advantages of Delisle’s tale is that he arrives very much as an innocent abroad, with few preconceived ideas: He seems to know nothing about the region other than the fact that everyone appears to hate each other. At one point, he ends up chatting at a party with the nuclear whistleblower, Mordechai Vanunu, but has no idea who he is, and, as with most matters, Delisle doesn’t seem to care. Though his views are influenced by the fact that his wife and most of their friends are politically engaged and work for NGOs active in the occupied territories, he remains aloof, casually interested in things, but not too interested. When he’s not stuck taking care of his kids, he simply wants to go off on his own and sketch ancient sites.

What this means for the reader is that between trips to the Dome of the Rock, the Western Wall (anachronistically translated as “The Wailing Wall”) and Mea Shearim, among others hot spots, there are a lot of panels dealing with child care logistics and shopping excursions. The comic irony is that despite being in a place of fascination and conflict, Delisle seems to prefer going shopping or sitting in cafes to hanging out with the ladies of the peace activist organization Machsom Watch or giving a poorly attended comics workshop in Nablus. When invited into a yeshiva to dance and drink on Purim, he demurs; when he travels to the Dead Sea, he doesn’t feel like going in; when he visits the Church of the Holy Sepulchre during a Greek Orthodox celebration, he leaves because he doesn’t like the crowds.

Delisle’s indifference is strange, but also funny. He is with friends and family at the Jerusalem Zoo when his wife receives a call about Israeli planes bombing Gaza. She immediately begins to mobilize the Doctors Without Borders team and tells the group to head home quickly. Delisle’s response, as everyone rushes away, is, “What about the baby tiger?”

Delisle can’t avoid some aspects of the situation, like the traffic jams created by West Bank checkpoints and the prayer call of the muezzin, both of which annoy him. He is also introduced to some of the complexities of Israeli and Palestinian life, like the Israeli Arabs who live in Pisgat Ze’ev, or how West Bank Palestinians shop in settlements or work for settlers. But his interest doesn’t have much depth, and he doesn’t ask too many questions.

This is too bad, because Delisle seems like an amiable, self-effacing guy. It’s a feature that comes through in his work, which makes for an enjoyable but not terribly compelling read. Although he sometimes makes an effort to explore and understand, you get the feeling he’d rather be back home in Quebec.