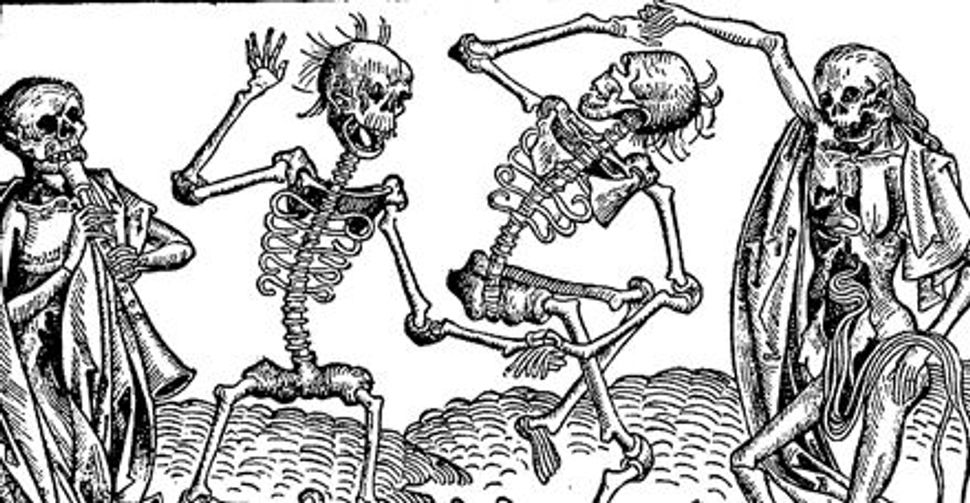 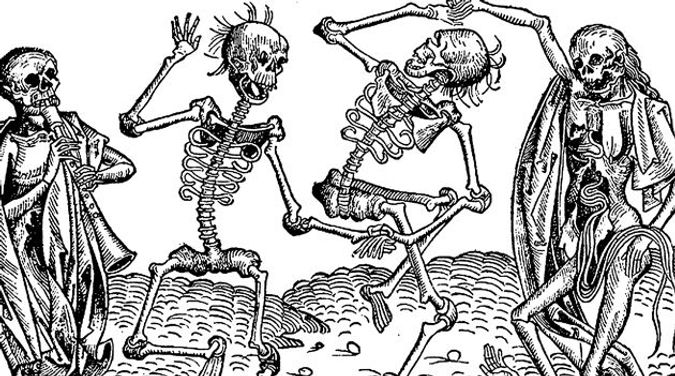 Moshe Waldmann has sent me an email about my July 20 column dealing with how Yiddish sometimes uses different words when referring to Jews as opposed to gentiles. One example given there was the verb mekaber zayn, to “bury” (from Hebrew kavar), which is reserved by Yiddish for Jews, and Mr. Waldmann wonders whether this verb might have something to do with the word “macabre.” Alternately, giving as his source the Free Online Dictionary, he suggests that “macabre” could be related to “Maccabee.” The reason for believing this, the Free Dictionary explains, is that “macabre” comes from the French danse macabre or danse macabré, also known in medieval times as the Dance of Death, and that “the Maccabees were Jewish martyrs who were honored by a feast throughout the Western [Catholic] Church, and reverence for them was linked to reverence for the dead.”

Sounds far-fetched? Actually it isn’t, even if the entry for “macabre” in The Free Dictionary is no model of accuracy. There are in fact three scholarly theories about “macabre,” of which the Maccabee theory, although one may be permitted to have one’s doubts about it, is the most commonly accepted.

Let’s start with some background. First, medieval Catholicism and the Maccabees. The First and Second Books of Maccabees (the first originally written in a long-vanished Hebrew version, the second by a Jew in Greek) tell the story of the second-century-B.C.E. Maccabean revolt against the tyrannical Antiochus, which produced the holiday of Hanukkah. While neither book made it into the Jewish biblical canon and both were subsequently lost to the Jewish people, both were included in the Catholic Bible, where they remain to this day. Chapter 7 of Maccabees II tells graphically of the grisly murder by Antiochus’s troops of seven brothers for refusing to desecrate the Torah by eating pork. Traditionally known as the story of “Hannah and Her Seven Sons,” even though the mother in Maccabees is nameless, it was taken by the church as a prefiguration of the martyrdom of the early Christian saints by the Romans, and the seven brothers were given the title of “the holy Maccabean martyrs.”

As for the Dance of Death, it originated sometime in the Middle Ages as a Christian pageant akin to the medieval morality plays. In it, individuals from the highest to the lowest walks of life were approached one by one by the figure of Death and summoned by him until a long line of them was formed and danced away with him. Starting in the early 15th century, the Dance of Death became a popular subject for paintings, the first of which, called “La Danse Macabré,” was painted on the wall of the cemetery of Les Innocents in Paris. Even earlier than that, however, in 1376, the French poet Jean le Fèvre had used this term in a poem in which he proclaimed, “Je fis de Macabré la danse,” “I did the dance of Macabré,” by which he meant, “I nearly died.” The term first appeared in English in 1426, when John Lydgate, in a translation of another French poem describing the tableau at Les Innocents, wrote: “I toke on me / To translaten al / Owte of the frensshe / Macabrees daunce.”

And now for our three theories:

1) Macabré is a corruption of “Maccabee” and refers to the seven brothers who went to their deaths. Cited in support of this view is a Latin text, dating to 1453, that speaks of the Dance of Death as chorea Machabaeorum, “the dance of the Maccabees.” Moreover, there is a narrative poem by the French troubadour Chrétien de Troyes in which Judah Maccabee is called “Judas Macabré.”

2) Macabré is a French surname that probably belonged to the painter of “La Danse Macabré.” In favor of this hypothesis is the fact that the surname Macabray did exist, two Jean Macabrays appearing in the medieval registry of the French city of Besançon.

3) Macabré derives from Arabic makbara, “cemetery,” from the verb kabara, “to bury,” a cognate of Hebrew kavar. Cited on makbara’s behalf are such Portuguese variants for “cemetery” as almocabra, almogávar and almocouvar, borrowed from Arabic during the long Arab presence in the Iberian Peninsula.

All three theories have their Achilles’ heels. Against Theory 1 it can be argued that, precisely because they chose to be martyrs, the seven brothers are improbable symbols of human beings led unwillingly to an inexorable death. To Theory 2 it can be objected that there is not the slightest indication that there ever was a French painter, or any Frenchman connected to the Dance of Death, named Macabray. Theory 3 forces us to assume that the term danse macabre reached Europe from Portugal via Spain, from both of which countries it then disappeared, when all the evidence points to a French origin. The great Spanish lexicographer Corominas, in his Diccionario Etimológico de la Lengua Castellana, derived Spanish macabro from French macabre and not vice versa.

Theory 3 strikes me as the least likely. Theories 1 and 2 seem equally plausible. Moreover, since the French surname Macabray may very well come from Macabré for “Maccabee” as used by Chrétien de Troyes, the Maccabees could be behind macabré in either case. That would indeed make “macabre” one of the relatively small number of words that the English language ultimately owes to the Jews.