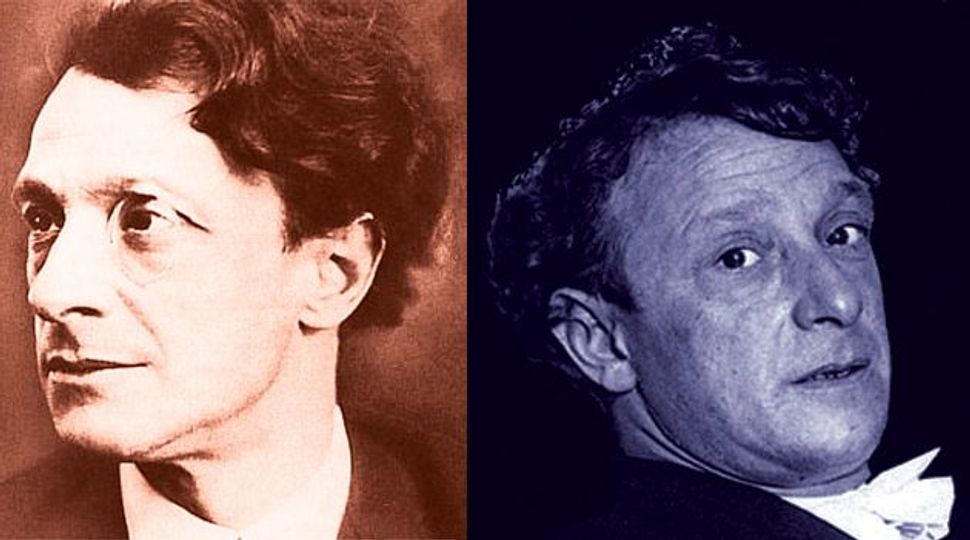 On the Origins of Jewish Self-Hatred
By Paul Reitter
Princeton University Press, 176 pages, $26.95

What do we talk about when we talk about Jewish self-hatred? That’s the question Paul Reitter tackles in his new book, “On the Origins of Jewish Self-Hatred.” After tracing the first appearances of the term “Jewish self-hatred” in interwar Germany, and filtering out contemporary polemics, he looks for what remains. The precipitate, achieved through a painstaking literary decanting of both primary texts and secondary scholarship, is odd as well as remarkable.

“Jewish self-hatred,” according to Reitter, originally meant something positive. It was not simply internalized prejudice, nor was it a club with which to beat your political opponents. Rather, it was a distinctive, ironic and redemptive way of being: “the capacity through which the Jews could teach the world how to heal itself.”

If that inversion sounds like intellectual alchemy, it helps to know something about the topsy-turvy world of fin de siècle Austro-German journalism, or of what was much the same thing, fin de siècle Austro-German Jewry. Those circles were at once headily intellectual and intensely petty. You might switch cafes to woo a potential lover, but the result could be a mind-expanding exposure to “anti-patriarchal psychoanalysis.” Everyone — Reitter’s cast includes such luminaries as Martin Buber and Sigmund Freud — knew everyone. Writing for this small, connected elite, journalists produced “feuilletons”: belletristic, baroque essays in self-referential, insider codes.

As a result of this involution, anti-Semitic tropes and stereotypes — like everything else — had many meanings. Compared with the feuilletonists, debates over “hipster racism” seem like child’s play (and if you don’t know what “hipster racism” is, well, at least you have a taste of the allusive obscurity involved in the feuilleton). Reactionary anti-Semites, for instance, constantly attacked the “Jewish press” for its supposed decadence and immorality. If you wanted to attack journalists, whether you were a folkish nationalist or a hard leftist, anti-Semitism was a handy way to signal your opposition — even if you couldn’t care less about the Jews.

In his first book, “The Anti-Journalist: Karl Kraus and Jewish Self-Fashioning in Fin-de-Siecle Europe,” published in 2008, Reitter rehabilitated German-Jewish journalist and sometime anti-Semite Karl Kraus on such grounds. Employing anti-Semitic tropes and arguments, Reitter argued, didn’t mean Kraus was a mindless bigot anymore than graduate students toting books by Slavoj Žižek actually share the Slovenian philosopher’s radical politics: They are symbols or styles, the intellectual equivalent of a handbag. And like handbags, anti-Semitism could be worn self-consciously and ironically.

In “On the Origins of Jewish Self-hatred,” Reitter attempts to plumb similar ironies within the work of two other German-Jewish thinkers: gay satirist Anton Kuh and philosopher Theodor Lessing. Kuh saw Jewish self-hatred as a form of Jewish election. Exile and neurosis, ancient in origin, seemed to Kuh to be the defining characteristics of a burgeoning modernity. Thus the Jews were to be a cultural vanguard of guilt and shame, and the rejection of “family, marriage and a vengeful God.” Kuh rejected both assimilation and Zionism as reactionary; instead, he wanted to convert Germans to Jewish self-hatred.

Reitter’s reading of Lessing is less clear. Lessing, according to Reitter, also understood that self-alienation, so long a Jewish condition, was spreading with industrialization to the rest of the world. In one memorable passage, self-hatred is described as a disease. Jews have suffered terribly, but they are now resistant and immune, and the “younger peoples” who are newly afflicted can learn from the Jews. Exactly how they are supposed to do so remains fuzzy: Reitter harps on the fact that Lessing’s 1930 book on the subject, “Jewish Self-hatred,” contains many passages that can be read as “self-help.” But Reitter does not make explicit the content of that advice. On that point, the reader will have to help herself.

And therein lies the chief frustration of “On the Origins of Jewish Self-Hatred.” It is an ambitious book. Reitter apparently intends, as he promised in an earlier, programmatic essay titled “The Jewish Self-Hatred Octopus,” to provide the framework for a history of Jewish self-hatred from “Anton Kuh and Karl Kraus through Theodor Lessing, Clement Greenberg, and Philip Roth, all the way to ‘The Simpsons.’” The result is a hodgepodge, maddeningly compressed, touching on but not fully developing the term’s background in prewar Germany, its use by Kuh and Lessing and its contested meanings today. Along the way, there is an excursus on different types of conceptual history and sustained and intricate critiques of Reitter’s scholarly peers. There is even a paragraph suggesting that Philip Roth continued the positive use of “Jewish self-hatred.” Thankfully, we have been spared “The Simpsons.”

Reading Reitter’s book, I occasionally had the suspicion that the author was himself writing a feuilleton. He writes colloquially but not clearly. (A short story “got [Thomas] Mann into some hot water”; a scholar who tries to define Jewish self-hatred “isn’t yet ready to give up on up on the phrase,” though others have “moved on.”) “Notwithstanding various differences, [contemporary scholar Shulamit] Volkov sounds quite a bit like Lessing channeling Kuh as she works with ‘Jewish self-hatred’”: That already confusing sentence actually appears in the first third of the book, before any sustained discussions of either Kuh or Lessing have been broached. Hyperbolic questions punctuate the narrative. One chapter, discussing Lessing’s rejection of Freud’s theory of the Oedipus Complex on the grounds that he hated his mother, too, begins by asking, “Could there be a sadder objection to psychoanalysis?” The question suggests Reitter has not talked to many neurotics.

To make sense of this book thus requires talmudic focus and concentration. “The Anti-Journalist” was well organized; perhaps the narrowness of a quasi-biographical subject helped. “On the Origins” hints at a way of making sense of Jewish difference, exile and the odd position of post-emancipation Jewry that is different from the well-known options. But this message is likely to be badly misunderstood by all but the most devoted readers (An early reviewer fallaciously likened Reitter to the horrid, Israeli-born anti-Semite Gilad Atzmon.) To borrow (and slightly distort) one of the reactions to Kuh’s 1921 book, “Jews and Germans”: “What good is all the wit in the world if you’re only talking to five acquaintances?”

Raphael Magarik is a freelance writer, luftmensch and soon-to-be Dorot fellow in Israel.