Gore Vidal and the Jew He Loved 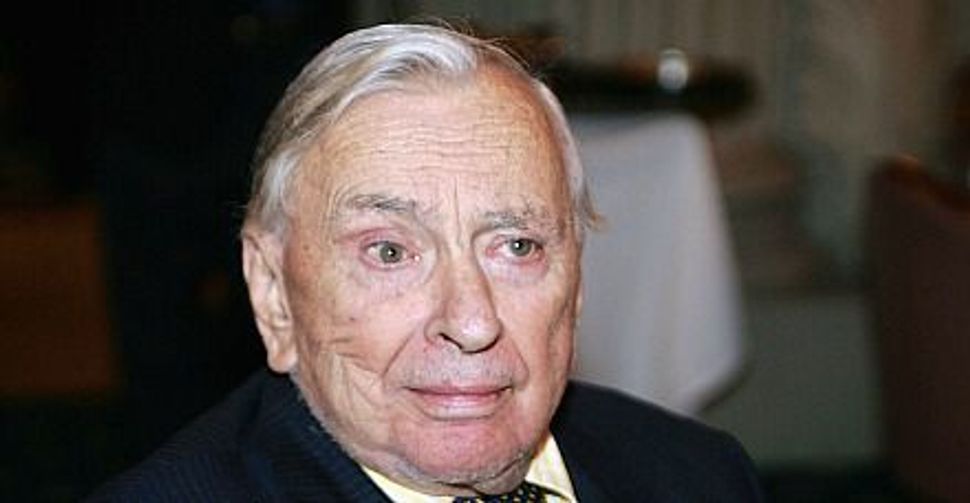 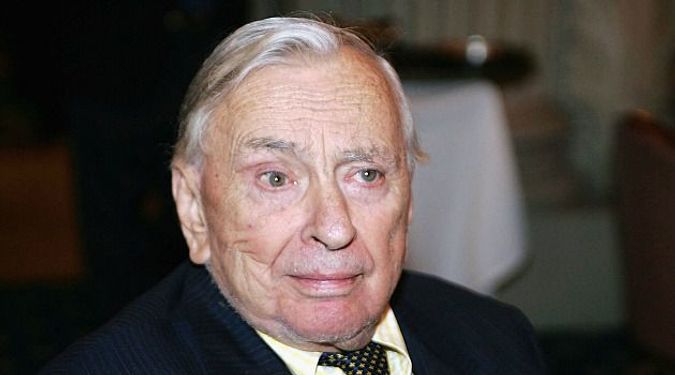 Even before the novelist, essayist, screenwriter, and playwright Gore Vidal, who died on July 31, is buried in Washington, D.C’s Rock Creek Cemetery alongside his life companion Howard Austen, bloggers have hastily called Vidal an anti-Semite. The reality is more complex.

Vidal will be remembered not for his political views, but his historical novels such as “Lincoln” and “Burr,”, plays (later filmed) such as “The Best Man,” which recently enjoyed a Broadway revival, and screenplays, co-writing William Wyler’s “Ben Hur” (1959) and adapting Paddy Chayefsky’s play “The Catered Affair” (1956).

The last-mentioned reveals a rarely-seen side of Vidal, in its empathetic view of domestic life and the struggles of companionship. From 1950 until 2003, when Austen died of cancer, he — an American Jewish advertising copywriter — and Vidal lived together. Indeed, it was Vidal who suggested that since Auster could not find a job on anti-Semitic Madison Avenue, he change his name to sound more goyish. As Vidal recalled decades later to interviewer Amy Goodman on the public access TV show “Democracy Now”:

[Howard] was turned down by every advertising agency — and he had graduated from NYU — because it was a Jewish name. Can you imagine? He was rejected because he was Jewish. And I said, “Well, this is silly.” I said, “Change the ‘R’ to an ‘N.’” So he became Howard Austen, which has caused a lot of confusion to biographers, but immediately he was hired at Doyle, Dane & Bernbach, a very good house. Amazing to think how recently all that was still in effect.

Practical effectiveness in the face of bigotry was a trademark of Vidal’s durable literary and journalistic careers, as well as successful Hollywood and Broadway stints. Vidal was accompanied by Austen, who was no mere domestic accessory. “Liberation: Diaries Volume 3” the final volume of journals by Christopher Isherwood, out in May from Chatto & Windus, with U.S. publication still to be announced, makes this clear. At a 1970s dinner chez Vidal and Austen in California where other guests included the German Jewish-born superagent Sue Mengers, Isherwood burst into an anti-Semitic rant, to which Austen took immediate and lasting exception. Despite the depth of their acquaintance and the height of their literary esteem for Isherwood, he was not forgiven for a long time.

Vidal could enjoy caustic disputes, such as the televised 1968 squabble during the Democratic Convention with William F. Buckley, Jr. whom he called a “crypto-Nazi,” later claiming that he meant to say “crypto-Fascist.” This accusation preceded Buckley’s proposal in “The New York Times” that all AIDS patients be tattooed, which struck some observers as reflecting not just Fascist ideas, but also Nazi ones.

Despite his sophisticatedly mediatized one-upsmanship, Vidal retained unexpected ties to childhood naivety. Vidal’s most telling essays include appreciations of childrens’ writers such as E. Nesbit, Edgar Rice Burroughs and L. Frank Baum. Vidal was so devoted to the last-mentioned Oz author that he wrote an unproduced 1960 teleplay for Groucho Marx of Baum’s 1896 nonsense fantasy “The Surprising Adventures of the Magical Monarch of Mo and His People.”

Vidal sometimes resembled an Oz dweller, especially after the late 1960s when he realized the American literary dream, dating back to Henry James and William Dean Howells, of dwelling in Italy. There he lived in a hilltop eyrie on the Amalfi coast, where distinguished guests were photographed by Austen, the results gathered in a 2009 book from Abrams Publishers, “Gore Vidal: Snapshots in History’s Glare.” which furthered the impression of Vidal as a lofty aristocrat whose pronouncements were not anchored in real life. Vidal not only resembled one of Federico Fellini’s lunar screen characters, he actually appeared in Fellini’s 1972 film “Roma” as an expatriate “American writer” and “illusion-maker” named Gore Vidal who was in Italy to wait and watch as “everything ends.”

This apocalyptic view, which Vidal would explore in his novel “Kalki” (1978), possibly led him to alliances with such fringe figures as the murderer Timothy McVeigh, the so-called “paleoconservative” Bill Kauffman, and the anti-Zionist Israel Shahak. In a preface to Shahak’s “Jewish History, Jewish Religion” (1994), Vidal praised the author’s “satirist’s eye for the confusions to be found in any religion that tries to rationalise the irrational.” Satire is hardly the first requirement for approaching the subject of today’s Middle East, though Vidal was, of course, a past master of satiric prose and fictional lampoons.

Considerably more valid than his satirical timing were Vidal’s polemics — produced for Jewish editors, The Nation’s Victor Navasky and The New York Review of Books’s Robert Silvers and Barbara Epstein — to condemn right-wing Jewish journalists. While few readers found anti-Semitism in Vidal’s mock claim that the Hotel Hilton Kramer must be some kind of Catskills resort, some did complain about Vidal’s response to a 1970 Harper’s Magazine article by Joseph Epstein, termed by Harper’s editor Midge Decter an “elegant and thoughtful account,” which stated that if Epstein “had the power to do so, [he] would wish homosexuality off the face of the earth, because [he considers] it a curse, in a literal sense.”

Decter’s own homophobic 1980 article “The Boys on the Beach” provoked Vidal’s response that “since these [Jews] are going to be in the same gas chambers as the blacks and the faggots, I would suggest a cease-fire and a common front against the common enemy, whose kindly voice is that of Ronald Reagan and whose less than kindly mind is elsewhere in the boardrooms of the Republic.” The implicit plea for good fellowship is belied by Vidal’s comparison of Norman Podhoretz and Decter’s attacks on minorities to Max Naumann, the assimilationist German Jewish patriot who in 1932 argued that Jews should support the Nazi party.

Vidal himself could be guilty of insensitivity to minorities. In a 2010 disavowal in Vanity Fair by an erstwhile ally, Christopher Hitchens deplored Vidal’s “very, very minor tendency to bring up the Jewish question in contexts where it didn’t quite belong.” In 1970, CUNY linguistics professor George Jochnowitz wrote a letter to the editor in response to Vidal’s review of David Reuben’s “Everything You Always Wanted to Know About Sex: But Were Afraid to Ask,”, in which Vidal derided both the “Jewish/Christian God” used to oppress gay people, and Reuben’s “manner which shifts in a very odd way from night club comedian to reform rabbi.”

Jochnowitz pointed out that Vidal was “totally wrong to suggest that condemnation of homosexuals is a Jewish tribal peculiarity… In fact, Mr. Vidal, your tribe continued to burn homosexuals for centuries and centuries after my tribe had stopped stoning them. Christianity has been independent of Judaism for almost all of its history. Vidal ignores this when he persists in using terms like “Jewish/Christian God” to refer to the repressive side of Western civilization.”

An even more vehement repudiation of Vidal’s light-hearted japes in serious contexts came in 1973 from Israel Kapstein, a Brown University English professor. Kapstein had been mocked by Vidal as collateral damage in a review of novels by one of Kapstein’s former students, Watergate conspirator E. Howard Hunt. By taking on journalists and writers well able to defend themselves, in his vast literary output Vidal was unfair and indeed wrong at times, but to condemn him once and forever as an anti-Semite trivializes the term.

Watch him in the 60s, discussing Ronald Reagan’s record of supporting racist politicians.

Gore Vidal and the Jew He Loved