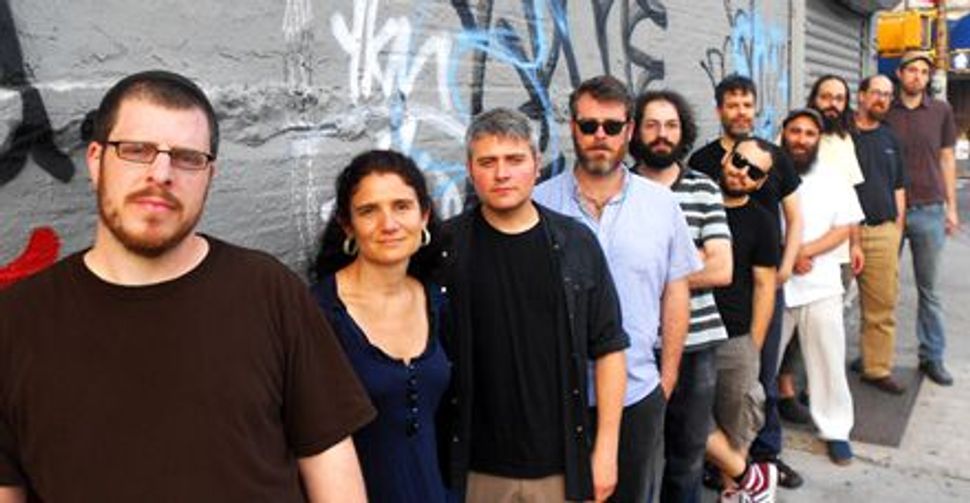 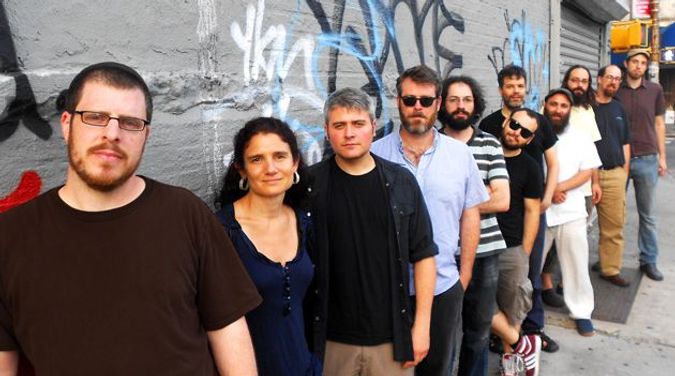 Fela Anikulapo Kuti and Shlomo Carlebach are not an obvious pairing.

The first was a Nigerian musician, political activist and devotee of traditional Yoruba religion who married 27 wives simultaneously, was jailed for his aggressive criticism of the Nigerian government and died of AIDS after a lifetime of inspired rabble-rousing. The second was an American Orthodox rabbi and musician who joined the Lubavitcher Hasidic sect, founded a countercultural Jewish commune in San Francisco in the 1960s and evolved into a cuddly icon of inclusive, participatory Judaism.

Nonetheless, as guitarist and composer Jon Madof recently proved at an open rehearsal of his latest ensemble, Zion80, held at The Stone, John Zorn’s experimental music venue in Manhattan’s East Village, the two deceased icons get along pretty well.

Zion80 takes melodies by Carlebach and clothes them in original arrangements inspired by the work of Kuti, inventor of the hugely influential style known as Afrobeat. (Zion80 is a riff on the name of Kuti’s last band, Egypt 80.) Madof explained the genesis of the idea in an email to the Forward:

I was getting ready to take my kids to shul one Shabbat last year, and I started singing a Carlebach tune to myself with an Afrobeat rhythm (probably because I had been listening to Fela a lot the day before). I thought about other familiar Carlebach tunes, and they all seemed to work. As soon as I figured out that nobody had done a similar project already, I went for it!

A group practice session by a 12-piece band that started on a whim might not sound like something you’d necessarily want to sit through, especially since Zion80 was scheduled to play a full-fledged performance later in the evening, as it will every Monday night through September. But this one was well worth it.

For one thing, the group is so good that the expected mishaps — missed cues, blown endings — hardly diminished the quality of what transpired. There was little to distinguish the rehearsal from the performance, except that the latter contained fewer interruptions and less spoken commentary.

For another, those comments shed light on the process by which Madof is constructing this unusual combination of neo-Hasidic melodies and Afro-pop arrangements: altering harmonies, expanding forms and making plenty of space for improvisation. And the interruptions gave listeners a chance to reflect on just how unusual that combination is, and how well it seems to work.

Kuti and Carlebach lived in different musical worlds. Kuti’s Afrobeat, a product of Ghanaian highlife, American funk and personal genius, was a densely textured, polyrhythmic confection in which horns, percussion, keyboards and guitars all played interlocking parts, just like the instruments in a West African drum ensemble or one of James Brown’s ’60s-era bands.

Carlebach was a singer-songwriter whose stock in trade was crafting hummable tunes inspired by Hasidic nigunim, those wordless, suitelike melodies that serve as vehicles for ecstatic communion with the Divine.

On the surface, this hardly seems like a recipe for great success. But as it turns out, anything sounds good recast as Afrobeat, especially when played by a band assembled from the Downtown and Jewish elite.

Many of the musicians in Zion80 are separated by considerably fewer than six degrees, having played together in progressive Jewish-themed ensembles like Pitom, and Madof’s Rashanim trio; with Jewish name brands like Matisyahu and the Klezmatics, or in various other groups that deal in improvised and world music, such as Balkan Beat Box, Slavic Soul Party and Beat the Donkey. Together they bring a flexibility and range of experience that further enliven an already rich combination of styles.

The tunes — Carlebach staples like “Pischu Li” and “V’Shamru,” “Ein K’Eloheinu” and “Lecha Dodi” — will be familiar to anyone who has suffered through a sing-along with a guitar-wielding rabbi or one of his many avatars: the Jewish summer camp counselor, the synagogue retreat leader. But you might not recognize the melodies since Madof’s Kuti-esque settings have so thoroughly transformed them.

Dancing in place before the band, signaling the musicians with brief gestures and tapping his noggin when he wanted them to return to the “head,” or top of the form, Madof steered a course between intense rhythm-section workouts and contrapuntal trumpet-and-saxophone fanfares, sprawling introductions and airtight grooves. He called up horn punches that evoked the slightly sour ones on Kuti’s seminal records from the late 1960s and early ’70s, summoned sweetly tangled guitar lines and swirling organ accompaniments, and bopped his head, grinning, at the intricate web of rhythms spun by conga player Marlon Sobol (Shem’s Disciples) and kit drummers Aaron Alexander (Midrash Mish Mosh, the Klezmatics) and Yoni Halevy (The Apples, Spokinn Movement) — rhythms anchored by the monumental basslines of Shanir Blumenkranz (Pitom, Edom, Rashanim).

And then there were the solos: Jessica Lurie’s blistering bebop-to-free jazz baritone saxophone triptychs, Peter Hess’s expertly overblown tenor forays, Ben Holmes’s and Itamar Borochov’s contrasting trumpet meditations, and Brian Marsella’s flamboyantly virtuosic outbursts on the Farfisa organ. “I think they used Farfisa on the original Afrobeat recordings,” commented my friend Jehu Goder, a bass player who used to tour with a Zairean pop band. “But not like that.”

The highlight of the evening — and possibly of my entire week — occurred toward the end of the rehearsal, when guitarist Eyal Maoz, of Edom, took a left turn off “Tov L’Hodot” and wandered into a thicket of loops, distortion and pure noise. It was beautiful. It was unexpected. It was Zion80 in microcosm.

Alexander Gelfand is a recovering ethnomusicologist, a lapsed West African drummer and a regular contributor to the Forward.