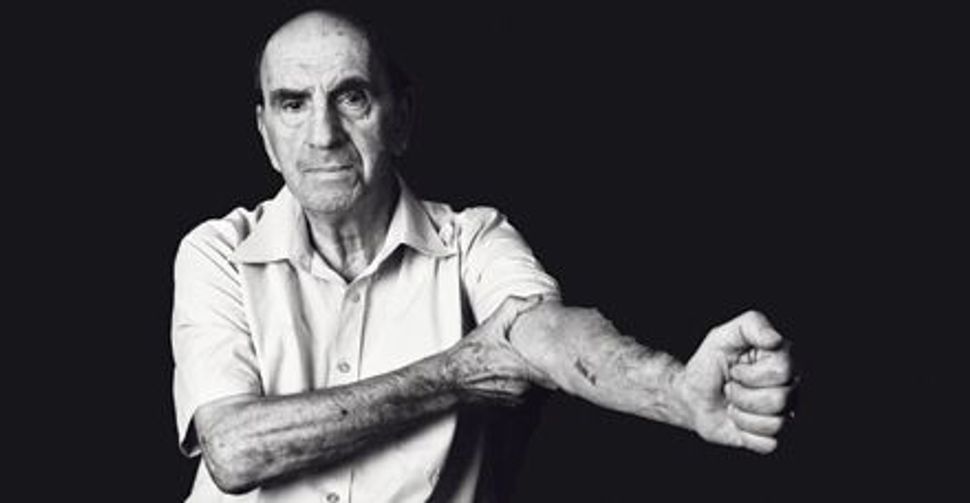 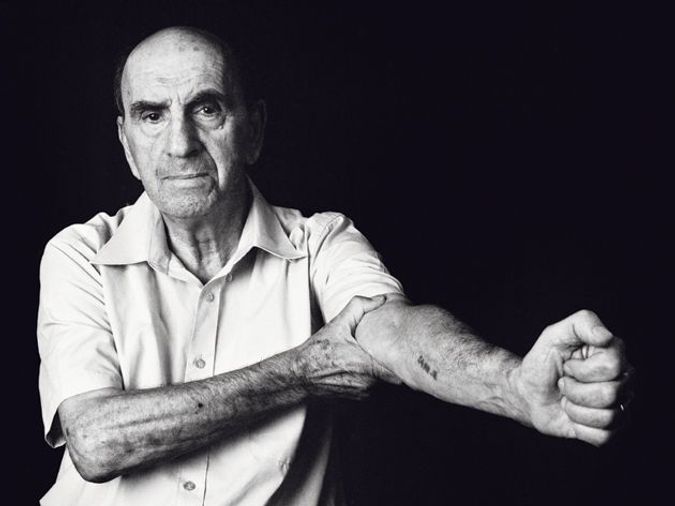 Three years ago, an elderly patient came into an emergency room in northern Israel complaining about chest pain. When a young doctor, Dana Doron, examined her, the woman pulled up her sleeve, pointed to a tattooed number on her arm and asked, “Do you know what is it?” She then proceeded to talk for an hour. The next day, the woman’s daughter came in to apologize. “Each time that my mother wants to talk about her number, she goes to an emergency room and complains about chest pain,” she said.

This experience made Doron consider how Holocaust survivors with tattooed numbers think and talk (or don’t talk) about this physical mark of the past. Her thoughts led to a desire to commemorate the survivors, and then to capture them on camera — to create images that will become, as she says, “a time capsule.” Doron asked her friend Uriel Sinai, an Israeli photojournalist, to take pictures of survivors with their numbers exposed. He agreed, but it soon became clear to both of them that what they needed were not just images, but also the stories and the relationships that the survivors shared with them. Sinai got out his video camera and started filming. The result is a beautiful and moving film — “Numbered” — that premiered in July at the Jerusalem International Film Festival.

The film opens with a quotation from Primo Levi: “With time, my tattoo has become a part of my body. I do not display and do not hide it. I show it unwillingly to those who ask out of curiosity, readily and with anger to those who say they are incredulous. Often, young people ask me why I don’t have it erased. This surprises me: Why should I? There are not many of us in the world to bear this witness.” Through its remarkable visual poetry, “Numbered” lets other, lesser-known survivors’ voices tell us their stories.

The documentary provides no linear narrative and no historical explanations. Instead, the film intercuts stories of several survivors, told by them and their families. Handsome, cocky Daniel ran away from the Nazi bullets in the ghetto. Since then, he has considered himself “superior” — because he owes his life only to himself. Artistic, thoughtful Gita protected her children from her grief, singing to them enchanting songs of her native Macedonia, as she was crying silently inside. Zoka, a shopaholic, uses clothes to protect herself from the memories of cruelty and the enduring sorrow. These and other people kept their numbers. They incorporated them into their present as a reminder of a painful but also victorious past. For them, the mere fact of their survival, and then of finding love and raising families after Auschwitz, is a victory. Their love stories are the most moving aspect of the film.

Others chose to erase the numbers. In the early days of the State of Israel, those with tattoos on their arms faced a terrible stigma. Ruth was a journalist who felt that the moment people saw her number, they knew (or rather assumed they knew) more about her than she did about them, so she had her tattoo surgically removed. Another survivor kept his tattoo, but in a lifetime in Israel he never wore a shirt with short sleeves.

Survivors didn’t have a choice about their tattooed numbers; those were forced on them in the camps, often with pain and violence. But today, their children and grandchildren, the second- and third-generation survivors, are choosing to be marked with a tattoo, replicating the numbers on their bodies. A middle-aged woman who just lost her father recalls that his number was incorporated into the very fabric of their life: The family used it for lock codes and passwords; the number became part of everyday routine. When the woman’s father passed away, she had his number tattooed on her leg. A young grandson of Abramo, a survivor from Thessaloniki, had his beloved grandfather’s number tattooed on his arm, in the exact same place as Abramo. “Is this so that they don’t forget?” the old man asks him. “So that I’ll never forget,” his grandson answers.

The film is stunning for the physicality of its images. Often, an image of a survivor fills up the whole screen, with only darkness for a background. The camera does not shy away from close-ups of the old faces, old bodies, old arms; the sight of human flesh is overwhelming. Through Sinai’s remarkable cinematography, people on screen become almost palpably present. Black-and-white still portraits of survivors punctuate the colored moving footage. Not only do we see the stills, but we also witness the very act of photography, when survivors pose for the camera to tell their stories. And then — a burst of a photoflash, a click of a shutter, and a stark image freezes on screen.

Sinai explained why they use still photography instead of voiceover: “We didn’t want a plot, a traditional narrative, so the fact that I am photographing the survivors on screen was the organizing principle of the film.” The physicality and the embodiment of images were so important for Sinai that for this project, he set aside his digital equipment and took pictures on actual film, “so that something physical and concrete will remain as a result of our work.”

But the film is more than just a physical monument. Through its deliberate and emphatic depiction of the filmmakers in the act of creating tangible memories for the future, “Numbered” joins the new generation of Holocaust documentaries that explore how the event might survive through generations. Along with other recent Israeli films, such as “Don’t Touch My Holocaust,” “A Film Unfinished” and “A Documentary About the Holocaust,” “Numbered” does more than tell survivors’ stories — it also pushes us to rethink the very nature of memory and the possibilities of representing national trauma and personal pain.

Olga Gershenson is associate professor of Judaic and Near Eastern studies at the University of Massachusetts Amherst. Her new book about the Holocaust in Soviet films is forthcoming from Rutgers University Press.