Composer Who Rocked the ‘Cradle’ 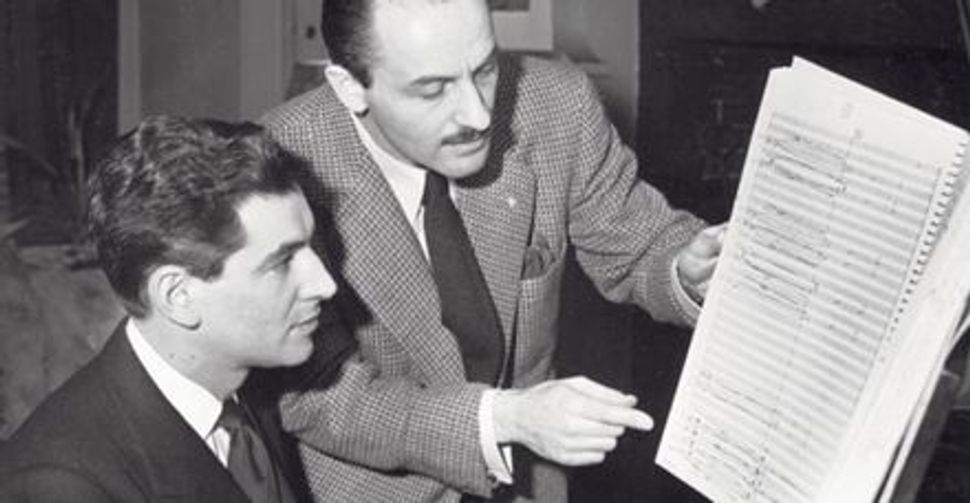 Image by Courtesy of The Library Of Congress 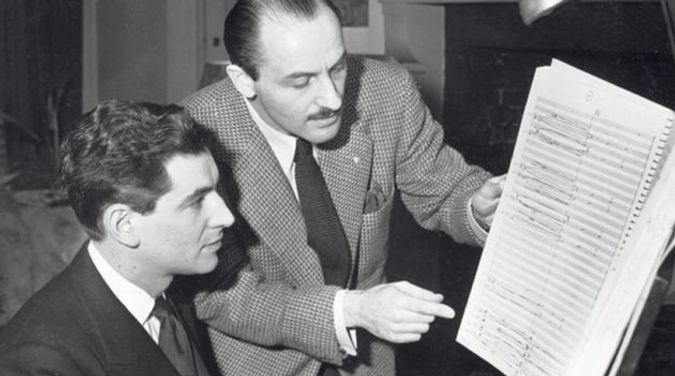 A Pair of Steins: Marc Blitzstein (right) led a more down-to-earth existence than that of his friend and fellow-composer Leonard Bernstein. Image by Courtesy of The Library Of Congress

A brilliantly researched new biography by Howard Pollack, “Marc Blitzstein: His Life, His Work, His World,” out soon from Oxford University Press, is shining light on how one 20th-century American Jewish composer expressed his identity as a politically active leftist without abandoning Yiddishkeit. Marcus Samuel Blitzstein, who was born in Philadelphia in 1905 and died in 1964 in a gay-bashing incident while on holiday in Martinique, wrote the 1930s agit-prop musical about a steel strike, “The Cradle Will Rock,” as well as “Regina,” a gripping 1940s opera adapted from the Lillian Hellman play “The Little Foxes.” Yet he is probably best remembered for his 1950s English-language version of the Bertolt Brecht-Kurt Weill “The Threepenny Opera,” which had a long run off-Broadway at Greenwich Village’s Theater de Lys and in subsequent stagings.

Americanizing a musical interpretation of 1920s Berlin decadence for a new audience, Blitzstein produced an unexpected pop hit by changing the Brecht-Weill “Morität,” a wryly ironic version of a medieval murder ballad, into that dashing anthem of criminal cool, “Mack the Knife.” In the latter song, Blitzstein made many changes. Brecht’s original reference to one Jewish victim, “And Shmuel Meier is gone / as well as many a rich man / and Mack the Knife has his money / but nothing can be proven,” was de-ethnicized by Blitzstein into a “Louie Miller,” who disappeared “after drawing out his cash.” The notion of a Jewish murder victim, especially with a German context, had a difference resonance in 1920s Berlin than in post-Holocaust New York. By changing Shmuel Meier to Louie Miller, Blitzstein the lyricist and translator altered names just as many foreign-born American Jews did at the time: to sound more assimilated. At the Theatre de Lys production, some gifted Jewish performers indeed had adopted stage names for career purposes, such as Charlotte Rae (born Charlotte Rae Lubotsky) and Bea Arthur (born Bernice Frankel).

Amid such transformations between Old World and New, Blitzstein’s Americanized sensibilities retained ambiguous ties to European Yiddishkeit. This was reflected in his bumpy relationship with Weill, who warily considered that Blitzstein’s “The Cradle Will Rock,” with its social significance and mock church chorales, mimicked Weill’s own stage works. Blitzstein in turn had mixed opinions of such Weill productions as the opera-oratorio “The Eternal Road,” a 1937 work that warned the New York audience of anti-Semitic persecution in Germany. Blitzstein termed it “Weill’s best score, and also his most uneven.” In a lecture describing a previous Weill work, “The Czar Has His Photograph Taken” (1927), Pollack quotes Blitzstein as saying, “[Weill’s] music is essentially ugly because it is characterless; yet he is clever enough to keep the rhythms always going, they have push and go.”

Having studied with the great Austrian Jewish composer Arnold Schoenberg in the 1920s, Blitzstein wrote to friends, complaining that Schoenberg’s musical taste was “for me, highly faulty and frequently vulgar…. He would make of music an inert, dead pattern, fit only for the laboratory.” In a lecture, Blitzstein contrasted the French Jewish composer Darius Milhaud with Schoenberg, stating that in the former’s works, “we always get the sense that the musician is leading his theory, and is not being led by it.” Yet with time, Blitzstein, whose own works were praised by Schoenberg, grew to admire some of his teacher’s output, particularly Schoenberg’s high-strung avant-garde vocal work “Pierrot Lunaire” (1912) and his powerful String Quartet No. 3 (1927).

Gradually resolving tensions with such older composers, Blitzstein also explored Jewish tradition for artistic inspiration. Around 1930, he began composing an Old Testament ballet, “Cain,” which remains unpublished and unperformed in its final orchestral version. For a while, Blitzstein developed the ballet with Bialystok-born choreographer Benjamin Zemach, a mainstay of the Habima Theatre. Pollack notes that a “certain Jewish quality subtly informs the music.” Blitzstein had praised Zemach in the pages of the quarterly review Modern Music for his “rich, full tradition… rooted in the race.” Performed only in piano versions in the past decade, Blitzstein’s “Cain” is among his numerous hitherto-overlooked works that deserve revival today.

Another such work was created after a 1962 visit to Israel, where Blitzstein was invited as part of an “Israeli-American Dialogue” during which David Ben-Gurion and other notables spoke. Blitzstein told Jerusalem Post reporter Helga Dudman, “I certainly didn’t come looking for a home — but in a way I’ve found one.” Starting Hebrew lessons, Blitzstein jotted down notes in his private journal about a then-current project: “Have to be jewish (sic) to feel for Sacco-Vanzetti (or it doesn’t hurt).” The two Italian-born anarchists Ferdinando Sacco and Bartolomeo Vanzetti were executed for murdering two men during a 1920 armed robbery in South Braintree, Mass. Blitzstein, like most progressives of the day, saw the execution of humble immigrants as a travesty of justice.

Instead of completing the Sacco and Vanzetti project, which remained a mere fragment, Blitzstein launched into a new effort with more overt Yiddishkeit. As a guest teacher at Bennington College, in Vermont, Blitzstein was enthused about stories written by fellow faculty member Bernard Malamud. Blitzstein eventually selected two of Malamud’s tales to transform into short operas, “Idiots First” and “The Magic Barrel,” although both would remain unfinished.

In the first, a terminally ill Jewish man tries to stave off Death personified in order to make arrangements for the care of his mentally handicapped son. In the latter, a rabbinical student becomes the lover of a prostitute. These unorthodox themes inspired Blitzstein, and enough of “Idiots First” was written before the composer’s untimely death that a representative performing version could be completed by Kansas-born pianist-composer Leonard Lehrman, a Blitzstein maven and devotee.

Lehrman’s completion of “Idiots First,” first performed in 1974, has won consistent praise, whereas his 2003 version of Blitzstein’s “Sacco and Vanzetti” drew some critical ire, since Blitzstein left so little original music to guide the choices made by Lehrman, despite his experience with the late composer’s idiom.

Blitzstein has always attracted talented and devoted admirers, including his longtime friend Bernstein, whose ever-glamorous manner differed from Blitzstein’s down-to-earth lifestyle. In a 1964 letter to his sister, which is now in the Library of Congress, Bernstein, by then living on Park Avenue and in Fairfield, Conn., as the New York Philharmonic’s maestro, mourned Blitzstein’s murder at the hands of three sailors in a sexual pickup gone wrong. Noting that the cause of death was first revealed to be an auto accident and later revised to a beating by sailors, and at last the “blessed word robbery was mentioned, Bernstein added with anguish, “We pray the story gets no murkier — or should I say clearer?” He concluded, “Marc is dead, & I’ve lost an arm.”

Unlike Bernstein, Blitzstein ferociously courted Mack the Knifes in real life, and paid with his life for this unfortunate, if artistically inspiring, predilection. Quintessentially Jewish and American, Blitzstein deserves a place in the musical pantheon not far from his fellow gay Jewish leftist and celebrator of the common man, Aaron Copland.

See Micki Grant performing “Joe Worker,” about a brother who was killed on the job, from a 1964 off-Broadway revival of “The Cradle Will Rock” here.

From the same production, watch Jerry Orbach perform the final song, “The Cradle Will Rock” here.

Composer Who Rocked the ‘Cradle’