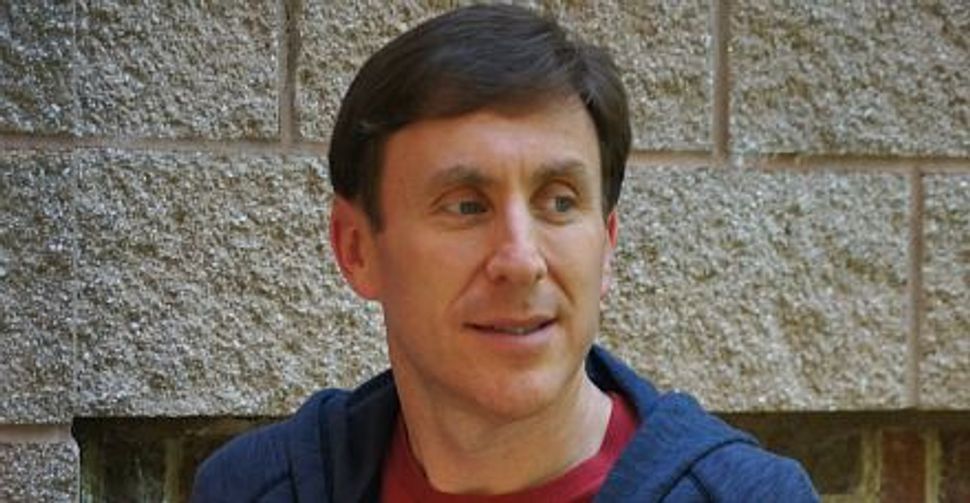 When I stepped into the living room of Jonathan Tropper’s large house in the unpretentious Westchester suburb of New Rochelle, I had a nervous pause: Had I caught him at a bad moment? It looked like he had just moved in, and most of his furniture hadn’t yet arrived. The walls were bare, and there was little in the room aside from a sofa, a piano and a pile of books. 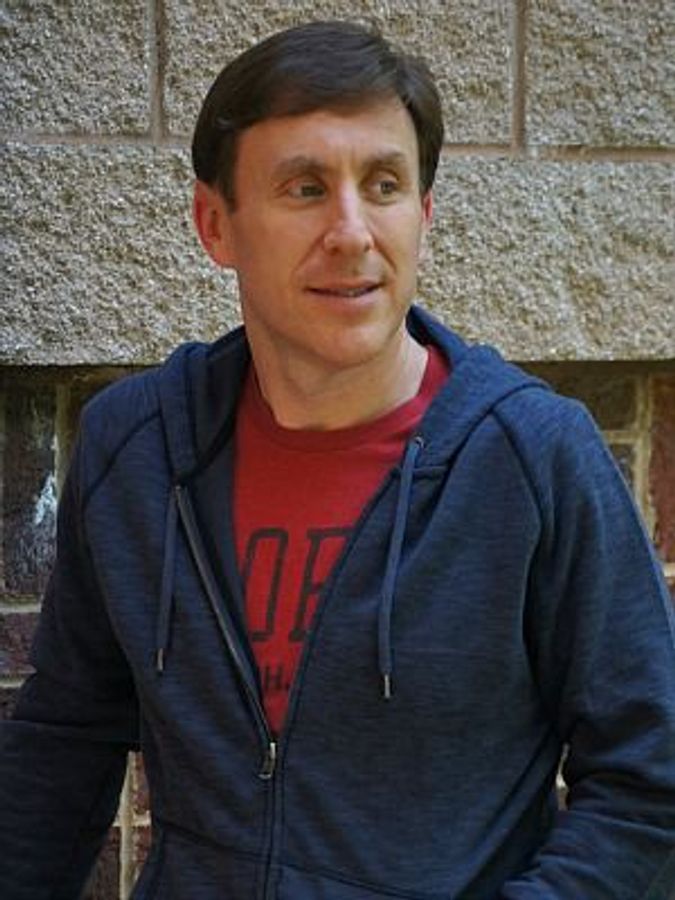 “I’ve actually been here six months,” the 42-year-old author assured me half-apologetically, as he emerged from his home office near the front door. “I just haven’t had time to decorate.”

For a cheat sheet on Jonathan Tropper’s literary oeuvre, check out this post in the Arty Semite blog.

Well, to be fair, Tropper has been busy. He’s preparing for a major promotional tour for the release of his sixth novel, “One Last Thing Before I Go,” and he’s also been commuting to a soundstage in Charlotte, N.C., where he is overseeing the shooting of “Banshee,” a TV crime-noir drama he co-created for Cinemax with writer/director David Schickler, author of “Kissing in Manhattan,” and developed with Alan Ball who wrote “American Beauty” and “Six Feet Under.”

In Tropper’s house, there are a few deeply personal touches: for example, a favorite oil painting of a young boy, which his father gave him, hangs over a fireplace. But there is not much else downstairs. The upstairs bedrooms of his three kids — a 13-year-old son who was bar mitzvahed in January, and two daughters, 10 and 5 —are the only fully-finished rooms. “I’ve put my children’s comfort as my top decorating priority,” Tropper said. “With my schedule, everything else has to wait.”

All Tropper’s comic novels, including the new one, feature a man in crisis as the protagonist, and it’s hard not to look at the author in these barren surroundings without wondering whether he’s another one of the troubled males that have led more than one critic to refer to him as the American Nick Hornby. In the new novel, Drew Silver is a Jewish middle-aged ex-rocker who is a crummy husband and an equally crummy dad. He has so royally messed up his life that he is almost relieved to be diagnosed with a terminal illness. Might there be a whiff of autobiography in Silver? Did Tropper, like Silver in his youth, use the band for meeting women? Tropper smirked. “Well, I played piano in a covers band, but that didn’t especially help with girls. There is never a piano around after the shows. Guys with the guitars were the ones who got lucky,” he said.

Back when he was a kid at Camp Morasha, a co-ed Modern Orthodox sleepaway camp in the Poconos, Tropper played piano for all the camp musical productions. During rehearsals, his homesick younger sister Dassi would run to him and he would hold her tight.

In New Rochelle, I asked Tropper to play the piano for me. He told me to make a request and I went with “Piano Man.” Tropper knows it by heart. 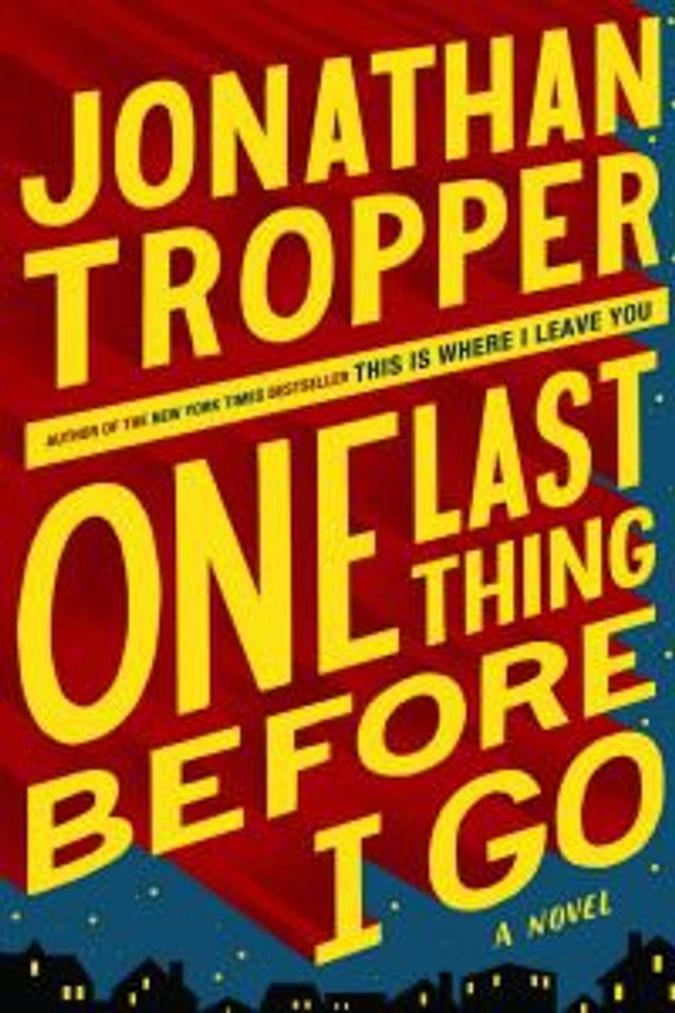 Born and raised in the upper-middle-class Bronx neighborhood of Riverdale, a 20-minute drive away, Tropper relishes the suburban normalcy of New Rochelle — especially now that he is newly divorced from his wife, a former nursery school teacher with whom he says he maintains an amicable relationship. She lives just a few blocks away, so the children don’t have to travel far during pass-off; Dassi Lewis, the sister he used to comfort at sleepaway camp, lives three doors down and is helping him through the transition. Her kids go to the same school as her brother’s, and all the children attend services together. Tropper’s parents still live in Riverdale.

Although Tropper’s parents are big readers, they are not major creative types that he could turn to for off-the-beaten-path career guidance. Yeshiva University, where he earned his undergraduate degree in English literature, was not exactly the prime spot to network with aspiring novelists. He received a master’s degree in creative writing at New York University.

Were there were any professors who thought he would be the Next Big Thing?

“None,” he answered emphatically, after a small laugh.

Despite the lack of encouragement, Tropper had a stubborn fantasy of making a literary splash, even as he dutifully worked for his father’s company, Fieldstone Displays, which later merged with Pacific Northern. He worked in marketing for watch companies such as Tag Heuer and Omega. If you search the Internet, you can still read some of the press releases he wrote.

Tropper’s first published book, “Plan B,” a 2001 romp about four 30-year-old college buddies kidnapping a fifth, initially sold bupkis. The big turning point came in 2005, when “Everything Changes,” his third novel, was sold to Tobey Maguire’s film production company. Finally he could leave the family business, and that made Tropper an anomaly in a family that was more conversant with the commercial than with the artistic side of the American Jewish experience. His grandfather, Abraham Tropper, founded Central Notion in 1947 to distribute safety pins, snaps and hooks and eyes. According to Crain’s New York Business he was still showing up at his office in 2008, at age 97.

“He’s 101 now, still around,” Tropper said with a laugh. “Not going to the office anymore, though!”

For a while, as far as Tropper himself was concerned, “showing up to the office” meant a daily commute to Steven Spielberg’s summer mansion in the Hamptons. He smiled ruefully at the memory. “In 2009 I had gotten the rights back to my novel “The Book of Joe,” and I decided to adapt it myself. On the strength of that, Fox 2000 hired me to adapt the Mary Chase play ‘Harvey,’ which of course was the basis for the Jimmy Stewart movie. It fell apart, but who can regret that?”

Currently, Tropper is consumed with “Banshee,” which will premiere this January. The premise: “A convicted felon gets out of jail after 15 years and fakes his identity to become sheriff,” Tropper said. Schickler, Tropper’s co-creator and writing partner on “Banshee,” is another 42-year-old. They met at a party thrown by mutual friend, James Frey, infamous author of “A Million Little Pieces.” Schickler, a practicing Catholic, quickly realized they were both novelists from strong religious backgrounds with a yen for action movies, and they decided to join forces. Schickler and Tropper had planned to pitch their ideas together, but as it happened, Tropper found himself in Los Angeles with a rare opportunity to pitch the idea for “Banshee” directly to Alan Ball.

“By the time Jonathan had walked to the parking lot, Alan had called Jonathan’s agent to say he wanted in,” Schickler said.

“I love that in his books and screenplays, Jonathan’s characters get 100% sucked into crisis,” said Greg Yaitanes, Banshee’s showrunner, who held that position on the TV show “House,” as well. Yaitanes, who was famously one of Twitter’s six original investors, doesn’t want for money but said he started “stalking” “Banshee” a day after hearing about it, hoping he could possibly direct.

Dassi Lewis recently visited her big brother on set in Charlotte: “There was an entire building just for the show,” she told me. “Everyone was coming up to him constantly. Wardrobe, casting, art department. ‘Jonathan! What do we do about this?’ Everyone wanted his opinion. Jonathan was the guy in charge. I was in awe.”

Once he’s finished with the first season of “Banshee,” Tropper has a slew of projects awaiting him. “The Book of Joe,” originally optioned in 2004 by Brad Pitt’s Plan B Entertainment is now being produced independently by Tropper with Ed Burns. The 2005 book “Everything Changes,” originally optioned to Maguire, just got independent financing; Tropper is writing and producing the screenplay, and Paul Rudd is attached to co-produce and star. Tropper’s script for “This Is Where I Leave You” is at Warner Bros., and he is working on it with “Rock of Ages” director Adam Shankman. He’s also working on a pile of scripts, including one based on Steve Martin’s novella, “The Pleasure of my Company.” And Dutton has just announced a new deal on an as-yet-unwritten novel.

While we spoke, Tropper moved one of his daughter’s toys away from the middle of the kitchen floor — tripping hazard. Given everything that’s happening in his career, these should be the gladdest days of his life. I resisted the temptation to give him a hug, for he doesn’t look like an entirely glad man. Above all the success looms the long shadow of divorce. Perhaps in the past, he had to fashion out of his imagination a Tropperesque man in emotional crisis, but now it seems as though he no longer has to make such a creative leap.

The current novel shows a darker side of him than his previous ones, he admits, even if it is a largely comic mediation on loneliness. “This book is different,” he said. “I’m playing with regret and redemption, and the simple truth that one can never control the end result of their lives. But in a way that goes down easy, I hope.”

Laurie Gwen Shapiro, Emmy-nominated director, is executive producing “The Manor,” an upcoming documentary about a Jewish family that owns a strip club, and directing “The Lowline,” about the world’s first proposed underground park on Manhattan’s Lower East Side.