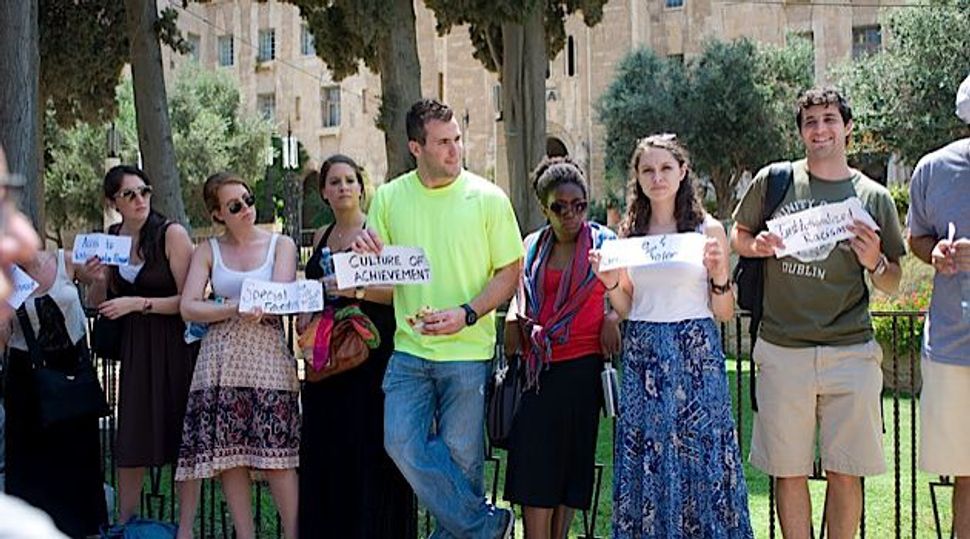 In Class: American educators learn with, and from, their Israeli counterparts. Image by Reality/TFA

In recent years, American educators have had growing opportunities to gain a window into the Israeli education system. The programs have somewhat different aims, but all foster a dialogue between educators from Israel and the United States — two countries that have similar struggles with issues of poverty, diversity and exclusion. A concurrent aim is to provide a more nuanced view of Israel to Americans, one that is neither hypercritical nor overly forgiving.

One such program is Kesher Hadash, or “New Connections,” a semester in Israel offered by the Davidson Graduate School of Jewish Education at the Jewish Theological Seminary. Kesher Hadash, which started this past spring, arranges a remarkably wide range of encounters for future Jewish educators, from meetings with settlers to visits with Palestinians. Students also visit local schools, study Israeli curricula and take “Diversity in Israeli Society,” a workshop attended by Jewish and Arab Israelis.

“The purpose of Kesher Hadash is to train a cadre of Jewish educators with a specialty in Israel education,” Dr. Alex Sinclair, a program administrator, told the Forward in an email. “[We believe] that engagement with Israel should include all of its rich and multifaceted diversity, including aspects that are frustrating, difficult and challenging. We believe that this results in a more robust relationship with Israel than if we were to try to sugar-coat or skate over those tough questions.”

Nina Yeske, who attended Kesher Hadash last spring, enjoyed this approach. While she defines herself as “an unapologetic Zionist,” she believes that the program showed her how to bring frank discussions into her own classroom. “I am into the idea of educating a student to come up with their own views,” she said. “Let’s get them to a point where they have enough information to make an argument. It’s not about the advocacy trend. It’s important to educate kids to think for themselves.”

Yeske, however, professed mixed feelings about the Israeli education system. On the one hand, in her experience, special education students were too isolated and their teachers were unprepared: “Most of the teachers did not have special ed certification, and it showed.”

On the other hand, she liked that Israeli schools were less rigidly structured. “Balagan is the best word for Israeli schools,” she said, using the Hebrew word for “fiasco” or “chaos.” “We could learn to relax a little bit in our own educational system. We don’t need to control every little detail.”

Dana Levinson had a stronger reaction to the lax structure of Israeli schools. For Levinson, student teaching at Yachad Modiin, a high school between Jerusalem and Tel Aviv, was a “culture shock.” She saw a lot of truancy and disciplinary problems.

“From a teacher’s perspective it’s like a zoo,” she said. “Everyone’s yelling and screaming and throwing things.” But the problems were not insurmountable. “The good teachers work with it. You yell with them.”

Nevertheless, Kesher Hadash gave Levinson a new view on how to talk about Israel with students. She now believes that because American Jewish educators are “afraid of creating a negative relationship with Israel,” they are too focused on advocacy. But Levinson thinks that by bringing in multiple perspectives — much like she experienced with Kesher Hadash — “you can allow the learner to struggle with Israel. You can foster a loving relationship with Israel and create a student interested in the challenges of Israeli society.”

While Sarah Sechan also appreciated the multiple perspectives of Kesher Hadash, she found, ironically, that Israeli educators can be too rigid. Kesher Hadash students take classes at the David Yellin Academic College of Education in Jerusalem. According to Sechan, the instructors there “had a concrete outline of what they wanted to discuss. If the students didn’t give what [the instructors] wanted, they would redirect the conversation rather than letting it flow organically. I appreciated the directness. But sometimes you need to meet the class where they are.”

If Kesher Hadash helps American Jews gain a more nuanced understanding of Israel, REALITY Israel uses the country to help American educators better understand themselves. REALITY Israel, which began in 2009, is an intense 12-day trip to Israel for Teach for America corps members; a Jewish background is not a requirement. The tour includes visits to historical and cultural sites, discussions with local educators and social entrepreneurs and leadership seminars.

According to Adam Simon, the associate national director of the Charles and Lynn Schusterman Family Foundation (which sponsors the trip), Israel is “a microcosm of all the issues we have in the U.S., the same challenges around minority populations, the transfer of knowledge between generations, the opportunity disparity.”

Claudio Estrada, a teacher and administrator at a charter school in Los Angeles, said that the trip tested his “physical, emotional and spiritual abilities.”

As a Mexican American, Estrada was intrigued by the “struggles and barriers” in Israeli society. He saw parallels between the historical difficulties that Jews faced and those of his own community. But he also saw a parallel with Israel’s minorities.

“We met with conservative Arab community leaders and they were saying how … the historical narratives of the country are very pro-Israel,” Estrada said. He was reminded of Latinos in the United States.

As a career educator, Estrada paid special attention to the educational system in Israel. He found that Israelis were having “healthy conversations” about how best to integrate Hebrew, Arabic and English. “But I think now it’s time to start implementing ideas,” he said. He also criticized the hierarchical nature of the system: “They need to stop making top-bottom decisions and ask teachers what they need and what they want.”

But Estrada also believes that Americans can learn from Israel, especially in terms of social cohesion. He admires the love that Israelis professed for their country, and how the Israelis that he met wanted to “give back” to their country through social entrepreneurship or national service.

Both programs, to varying extents, expose American educators to the deep divisions in Israeli society — between Jews and non-Jews and among the various expressions of Judaism. This more forthright approach seems to be working: The participants of Kesher Hadash and REALITY Israel expressed a kind of warts-and-all appreciation of Israel, as well as enthusiasm for the programs themselves.

Adam Simon did admit that there was one aspect of his program with room for improvement.

“We run them hard,” he said. “People need to sleep more.”