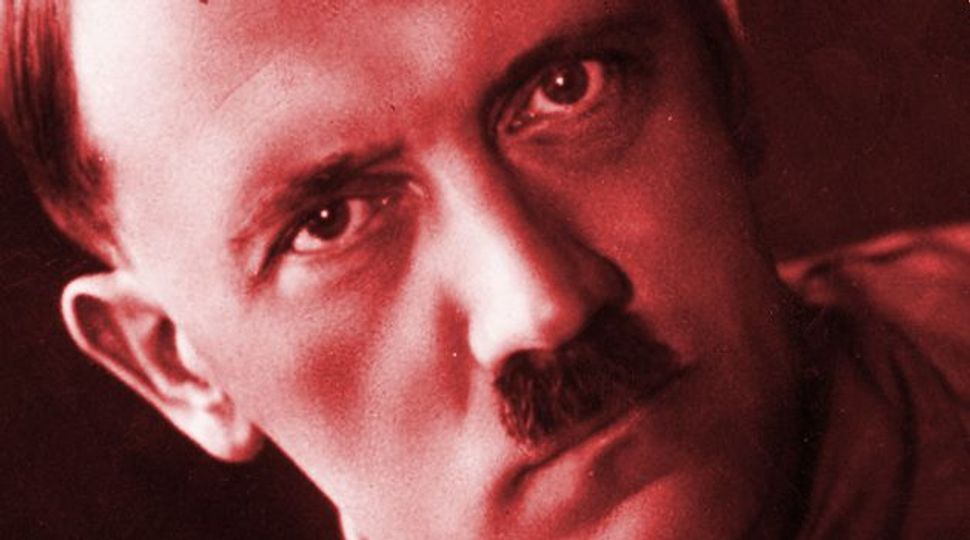 It Took the Jews: Hitler reportedly had difficulty expressing his emotional needs. Image by getty images

The Pursuit of the Nazi Mind: Hitler, Hess, and the Analysts
By Daniel Pick
Oxford University Press, 368 pages, $35

More than 20 years ago, Neal Gabler declared that Hollywood was the creation of Jewish immigrants from Eastern Europe. In his remarkable book “An Empire of Their Own,” Gabler in fact suggested that the Meyers and Zukors, carrying the accents and memories of their Jewish European origins, conjured not just the American film industry, but also “America” itself — a certain idea of America, to be precise, an idealized version of the country they had only just met.

“The Pursuit of the Nazi Mind,” it turns out, is not a war film produced by Hollywood during the 1940s. But Daniel Pick’s engrossing book nevertheless brings to mind Gabler’s work. His study focuses on the psychiatrists and psychoanalysts, many of whom were Jewish refugees from Germany and Austria, who were enlisted in the Allied effort to plumb the mind of Hitler and his henchmen. Applying Freudian analysis to subjects they never met, much less interviewed on a couch in their office for years, these immigrants invented a certain idea of Hitler.

Their creation, it seems, bore as close a resemblance to the real man as MGM’s “How the West Was Won” bears to the actual winning of the West.

Fittingly, the leading character in Pick’s account, Rudolf Hess, has been the subject of several films. (The best-known is “Wild Geese II,” a 1985 Hollywood film that starred a mentally frail Laurence Olivier in the role of Hess.) In May 1941, Hess, a member of Hitler’s closest circle, piloted an airplane to Great Britain and bailed out over Scotland. Though Hess presented himself as an honest broker between Germany and Great Britain, his astonished hosts instead concluded that he was a lunatic. Expecting to be welcomed by the highest echelons of the British government, Hess instead found himself labeled “an interesting diagnostic problem.” Quite literally, a Nazi basket case had dropped unexpectedly from the sky — the perfect specimen for better understanding the psychological underpinnings of Nazi fanaticism.

Over the course of Hess’s wartime imprisonment, his behavior grew increasingly bizarre. He suffered from a wide range of ailments, swung wildly in his moods and believed that the British were trying to poison him. Inevitably, his words and actions were no longer seen as the expressions of a merely criminal or evil man; they were now considered to be signs of mental illness. Though other diagnostic approaches existed, Freud had paved the great highway to the unconscious. This was especially true in Great Britain and America, particularly during the interwar period and the great migration of Jewish professionals from Central and Eastern Europe. The team that examined Hess, led by Henry Dicks — whose own roots were partly Jewish — was steeped in Freud; the case study they published in 1947, “The Case of Rudolf Hess,” borrowed heavily, if not exclusively, from the vocabulary of psychoanalysis.

Dicks and his team, it appears, rarely wondered about the conditions in which they studied Hess. To what degree were his symptoms the result of his captivity? Had Hess’s imprisonment helped to either create or cultivate elements of his hysterical behavior, his paranoid claims or delusional rants? Nor were Dicks and his team reluctant to move to the general case from the particular. The team’s profile of Hess frequently bled into a profile of an entire people, a diagnostic sounding of the German character that had allowed Hitler to happen. Hess was decidedly exotic, yet he nevertheless represented a culture that favored a “sado-masochistic, dominant-submissive cleavage or duality. The inability to resist successfully the father’s power, and the feeling of weakness or inferiority so created, [is] apt to result in a persistence of adolescent hero-fantasies.”

Pick carefully explains — though he does not ever really evoke — the desperate situation during the interwar period in which sane human beings found themselves. With the European stage ever more dense with charismatic and bloody-minded rulers, pretending to channel the desires and wills of their peoples, the need for explanation — some sort of rational handle on this great upheaval of the irrational — became imperative. Mussolini, Hitler and Stalin; fascism, Nazism and Stalinism, and xenophobism, racism and anti-Semitism were not simply subjects for academic conferences; instead, they represented existential threats to civilization. As a result, psychoanalysts and psychiatrists did not see themselves as afterthoughts of the war effort, nor were they seen as such by political leaders. To the contrary, they were key actors, engaged in the supremely important task of understanding how entire nations could fall under the spell of a madman.

That the answers of these analysts, though they all claimed the Freud mantle, differed so widely, did not undermine their conviction that their pursuit was scientific and useful. In fact, as Pick observes, the era was so steeped in the language of psychoanalysis that it bubbles up in the writings of the movement’s critics. Rebecca West, for example, impatiently dismissed the legion of psychiatrists at Nuremberg as “priests, doctors and warders” wrapped into one, but she nevertheless dipped into psychoanalytic parlance for her journalism. In a tragicomic twist, even the Nazis cited Freud. At Nuremberg, Hans Frank, the former governor of occupied Poland, confided to his psychiatrist that Hitler had difficulty with expressing his emotional needs. To nail home his point, he added, “Sigmund Freud, the last of the great German (sic)psychiatrists… pointed out the relationship between frustrated love and cruelty.” Frank’s future as a therapist was cut short, however, on the gallows at Nuremberg.

Of course, psychoanalysis was not the science it was reputed to be, and the terms it took for granted — the mind, the unconscious or the self — have since shown themselves to be the products of a specific historical mindset. A crucial element to this mindset, Pick notes, is the Jewish background of so many of its proponents and practitioners. So much has been written on this subject, and Pick clearly does not wish to join the bulging bibliography.

Yet his book raises an intriguing notion related, if only distantly, to Gabler’s Hollywood. Celebrated writers on the Nazi mind, like Bruno Bettelheim and Erich Fromm, or lead psychiatrists at Nuremberg, like Leon Goldensohn and Gustave Gilbert, were Jews whose families, or who themselves, were swept up in the 20th century’s waves of anti-Semitic terror. These “key researchers and analysts,” as Pick observes, “were directly the targets of the Nazi racial political fantasies that they studied.”

This neither dismisses nor denigrates the integrity of their work, nor the abiding insights it offers on the nature of evil. But it was also a form of creation that mirrors, in a glass darkly, the achievement of the Hollywood moguls. Whereas the Meyers created a past and present that existed only on Hollywood backlots, the analysts turned to a different kind of fiction to decode a present that all too horrifically was, and a future that must never be.