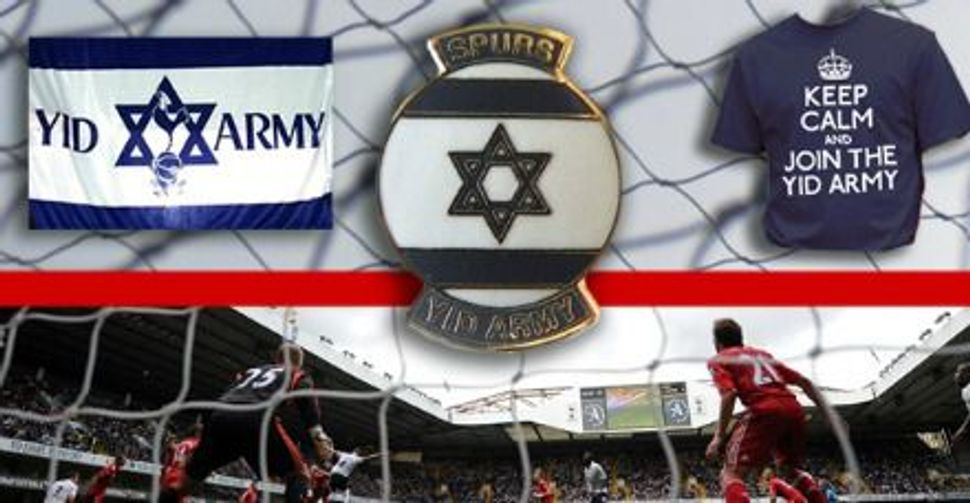 A pattern of rhythmic claps emanated from the upper deck of the Red Bull Arena in Harrison, N.J., as North London’s Tottenham Hotspur attempted to best the New York Red Bulls in a preseason exhibition soccer game this summer. But this was no average expression of fandom: Each round of claps was punctuated by a shout of “Yids!”

Add in the fact that the same fans had been cheering on Tottenham moments earlier with a variation on “When the Saints Go Marching In” — not to mention that none of the players on the field was Jewish — and the scene certainly could be mystifying to the uninitiated. Taken the wrong way, it might even border on offensive.

As one fan explained later that night, however, “There’s not an anti-Semite in this crowd.”

The team is properly known as Tottenham Hotspur Football Club, a member of the English Premier League. The team is called “Spurs” for short, but to the supporters who invaded the Red Bull Arena that night, it is exactly what the fan shirt proclaims it to be: “The Chosen Team.”

Tottenham fans began using Jewish references in cheering their team as a response to anti-Semitic taunts from rivals. In his 2004 book, “How Soccer Explains the World: An {Unlikely} Theory of Globalization,” Franklin Foer, a journalist and editor for The New Republic, wrote that in the 1960s, rival fans zeroed in on the fact that a large number of Hasidic Jews lived in the neighborhood surrounding Tottenham’s stadium, White Hart Lane. (Today the makeup of the neighborhood is much less Hasidic.) The fact that Tottenham has had many Jewish managers, chairmen (including current chairman Daniel Levy), and fans added fuel to the fire, said Danny Caro, sports editor of London’s Jewish Chronicle.

In response, Jewish and non-Jewish Tottenham fans alike have claimed the insults as a badge of honor. “Historically,” a club representative said, “the Y word chant has been adopted by Spurs fans as a ‘call to arms’ in order to own the term and thereby deflect anti-Semitic abuse. Both Jewish and non-Jewish Spurs fans use the Y word in what they consider to be an inoffensive manner.” (Spurs isn’t the only “Yid Army.” Holland’s Ajax Amsterdam has the same nickname, but for different reasons.)

Spurs fans are known to take their “call to arms” a few steps further. In the early 1980s, Jewish Tottenham fans responded to taunts from Manchester City supporters about their lack of foreskins by dropping trou en masse and showing off their circumcised members.

But the rival taunts have continued. Noah Schwartz, who became a Spurs fan at the age of 8 after his family moved to London, recalled cries of “Spurs are on their way to Auschwitz; Hitler’s going to gas ‘em again,” from fans of London rival Chelsea.

In recent years, anti-Semitism in English soccer has become a hot topic for debate. In April 2011, David Baddiel, a comedian, and his brother Ivor Baddiel, released a two-minute film calling on Tottenham fans to eradicate the Y word from their chants. The video sparked a flurry of online commentary about whether the moniker is truly anti-Semitic. (The word “yid” has a far more negative connotation on the other side of the Atlantic than it does in the United States.)

Fans seem to have a complex relationship with the “Jewish” team. Third-generation Spurs fan Daniel Conway (a London native now living in the New York area) says that when he hears non-Jewish fans aligning themselves with the Yid Army, it “makes me happy.” Schwartz was initially attracted to the club by a favorite player. “As soon as I found out that they were the Jewish club, that kind of clinched it for me,” he said.

Others disagree. “I’d say the majority want it to go away,” Caro said of Spurs fans’ use of the Y word. “As a Jewish football fan,” he said, “the word ‘yid’ is not something I want to hear at a football stadium.”

At the Tottenham-Red Bulls match on July 31, the crowd in the Spurs supporters section included Modern Orthodox Jews with yarmulkes and tzitzit, Conservative, Reform and secular Jews, and non-Jews of nearly every ethnicity imaginable. Most wore the club colors — navy and white — and when Welsh star Gareth Bale headed the ball into the net to tie the game in the 59th minute, Jew and non-Jew alike hailed the achievement with shouts of “Yiddo!” and “Yid Army!”

The scene evoked images from Tottenham’s home stadium, an atmosphere that Spurs fans in New York attempt to re-create on a regular basis during the season at O’Casey’s, a bar in Midtown Manhattan that hosts the “NY Spurs” club. Goalkeeper Brad Friedel, one of two Americans on the Tottenham team, was impressed with the support. “It seems to be growing,” he said.

Just how far Tottenham will get after last year’s fourth-place finish in the English Premier League and its near-inclusion in the elite Champion League remains unclear. But while debates over the Y word rage on, there’s no denying that the Yid Army is on the march.

Elliot Olshansky is a freelance writer living in Hauppage, N.Y.