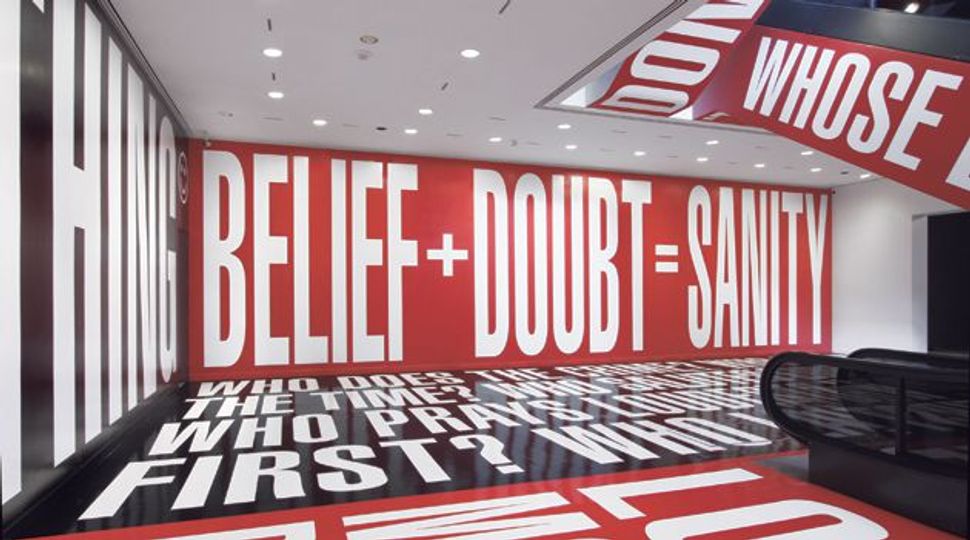 Black and White and Red All Over: At the Hirshhorn Museum in Washington D.C., Barbara Kruger?s texts are plastered to 6,700 square feet of walls and floors. Image by CATHY CARVER/Courtesy HIRSHHORN MUSEUM

When it was revealed in 2007 that Mother Teresa — widely regarded as a bastion of faith — doubted her religious beliefs, the public got a rare glimpse of a tormented, and distinctly human, life of paradox. The publication of Mother Teresa’s written communications exposed “a startling portrait in self-contradiction,” in which her private spiritual life was “an arid landscape from which the deity had disappeared,” David Van Biema wrote in Time magazine.

Faith and doubt are strange yet frequent bedfellows. While confronting a miraculous burning bush in Exodus 3, Moses doubts God’s ability to sway his fellow Israelites. And Jonah has no qualms about hiding in a ship cabin from an omniscient and omnipotent deity. So the pairing of belief and unbelief in the new exhibit “Barbara Kruger: Belief+Doubt” at Washington D.C.’s Hirshhorn Museum and Sculpture Garden shouldn’t be that startling. What is surprising, however, is how poorly the exhibit does anything more substantial than scratch the surface of a series of clichéd questions.

As visitors first step off the downward-bound escalator to see the exhibit, which occupies the lower level of the museum, they are confronted with the maxim, “Belief + Doubt = Sanity.” Like all the texts in the show, the words are presented as an equation consisting of bold, white, sans-serif text. Kruger’s texts appear on either black or red backgrounds, and are plastered to 6,700 square feet of walls and floor, as well as to the sides and bottoms of the two escalators.

At first blush, there may be profundity to Kruger’s statement, which shatters the binary of belief and doubt. But if one’s mind then wanders to all the insane people who have believed and doubted, or the insane people who have neither believed nor doubted, the exhibit is short on answers. The text adopts mathematical operations, but they are caricatures of algebra. Surely art owes no allegiance to science, but one may expect a more serious meditation on faith and unfaith from a museum that showcases the extensive and thought-provoking collection of the Latvian Jew Joseph Hirshhorn and houses, until 2014, this exhibit by Kruger.

Kruger was born to a Jewish family in Newark, N.J., in 1945, though in interviews she has presented herself as agnostic. She studied at Syracuse University, the School of Visual Arts and Parsons The New School for Design, and is an artist of considerable international renown. Seen as part of the second-wave feminism movement, she is often spoken of in the same sentences and exhibited in the same museum collections as such artists as Cindy Sherman and Jenny Holzer. Her background is in graphic design — she is a former head designer for the magazine Mademoiselle — and she has taught at California Institute of the Arts, the School of the Art Institute of Chicago and University of California, Berkeley.

The artist’s texts generally tend to question viewers about feminism, classicism, consumerism, and individual autonomy and desire. But, much like “Belief + Doubt = Sanity,” few of the texts pasted to the Hirshhorn walls and floors rise above the cartoony. “Look for the moment when pride becomes contempt,” one advises, while another one commands: “Believe anything. Forget everything.” Other texts wonder who is beyond the law and who wins, and one notes, “Money makes money.” A statement on the underside of an escalator, “Don’t look down on anyone,” is clever, as is, “It’s a small world but not if you have to clean it.” That last one appears on the floor under an escalator — no doubt a difficult and annoying place to clean.

In this exhibit, signs aren’t road posts pointing people in the right direction; they are the entirety of the environment. So, visitors walk around like the opposite of tourists in Manhattan. Instead of staring up at the skyscrapers and bumping into the locals who are trying to go about their business, Hirshhorn visitors stare at their feet trying to divine the inscriptions, which can be difficult to read. And it’s easy to start silently cursing fellow visitors who obstruct the view of the floor texts.

Ironically, the gift shop area might be the most interesting zone of the lower level at the Hirshhorn. It takes some flexibility and creativity to decipher the text, “Plenty should be enough” — it is blocked by a table of merchandise that, if the price tags are any indication, may require patrons to shell out more than plenty.

One question may stand out for those who are interested in the intersection of faith and art. On the floor beneath the initial “Belief + Doubt = Sanity” inscription, Kruger’s text asks, among other things, “Who prays loudest?” It would have been interesting for Kruger to meditate on Jesus’ charge in Matthew 6:5 leveled at the “hypocrites” who pray publicly so as to be seen. But, according to Glenn Dixon of the Hishhorn’s communications office, the closest thing Kruger has offered to a meditation on faith and unfaith, comes from an interview the artist conducted with Smithsonian.com. “In this country,” Kruger told her interviewer, “it’s easier to be a pedophile than an agnostic.”

Kruger may be agnostic, but any number of other doubters could probably have left viewers with far more provocative, and wittier, questions to ponder.