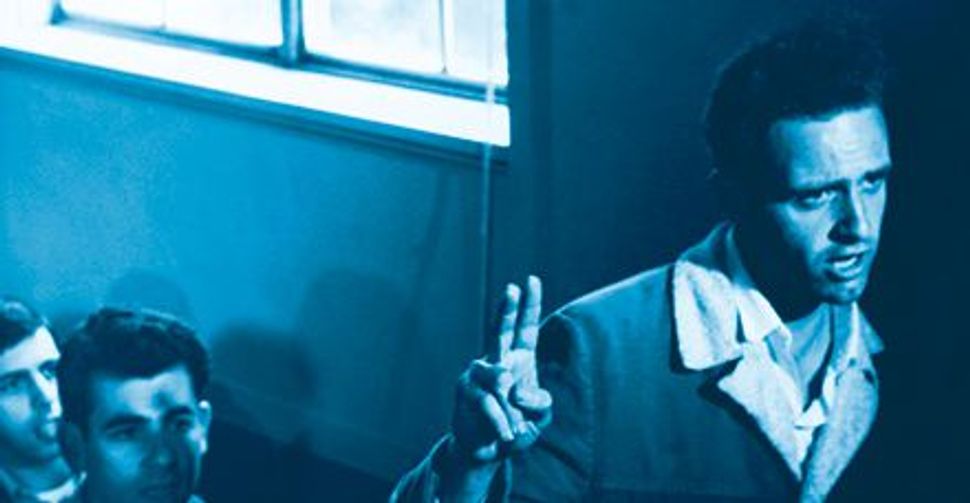 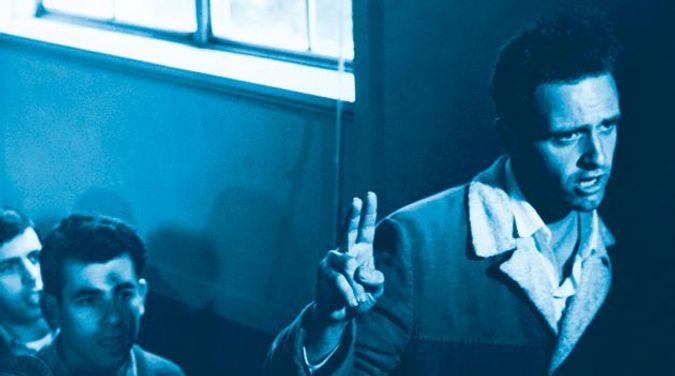 I Am Not a Radical: Mario Savio, leader of the Free Speech Movement, saw the civil rights movement as a way to respond to injustices such as the Holocaust. Image by Peter Whitney/Getty images

Though he had no way of knowing it at the time, Seth Rosenfeld was already working on his explosive new book “Subversives: The FBI’s War on Student Radicals, and Reagan’s Rise to Power” over three decades ago, before he’d even graduated from college, because of a phone call from his editor at his student newspaper.

The year was 1981. Ronald Reagan had just taken office as president, and Rosenfeld, a superannuated 25-year-old undergrad, was studying English and journalism at the University of California, Berkeley. The Daily Californian had obtained files from the Federal Bureau of Investigation under the Freedom of Information Act, most of them concerning bureau activities on campus during the ‘60s and ‘70s. Rosenfeld’s editor at the paper called him up — did he want to take a look? He soon found himself pushing a hand truck loaded with more than 9,000 pages of previously secret documents from the Daily Cal offices to his second-floor apartment a half a mile away.

Rosenfeld learned that the FBI had actively sought to undermine the Free Speech Movement, which had been protesting restrictions placed upon on-campus political activity, and which is often credited with sparking the nationwide student protests of the 60s. In fact, he found so much damning material in the documents that he made them his senior project.

But the files also seemed incomplete — pages missing, key information blacked out and an occasional handwritten memo that seemed to hint at deeper, possibly illegal FBI activities. So Rosenfeld sent out a request to the FBI for more files, thinking he’d have most of his answers in a few months. After graduation, the young reporter — who to this day claims that his college professors rather than his pre–bar mitzvah studies taught him to enjoy close scrutiny of obscure documents — freelanced for a few years, then worked as an investigative reporter for decades at both the San Francisco Examiner and the San Francisco Chronicle.

As for that FBI request, it took 31 years, five lawsuits, and more than a million dollars of taxpayers’ money (which is what Rosenfeld estimates the bureau spent fighting his lawsuits). But the bureau eventually released more than 300,000 pages of files. They reveal, in chilling detail, the extensive efforts of J. Edgar Hoover’s FBI to undermine, discredit, harass and investigate various men and women associated with radical campus groups, as well as previously unknown information about Ronald Reagan’s role as an FBI informant during his Hollywood years.

The book has been Rosenfeld’s lifelong project, his personal and professional “Moby Dick.” But there is nothing overtly Ahab-like about the soft-spoken 56-year-old when we meet in person at Caffe Mediterraneum, a few blocks from the Berkeley campus. “The Med,” as locals call it, is a former haunt of members of the Free Speech Movement, the Third World Front, the Black Panthers and other radical groups. It’s where Allen Ginsberg is said to have written “Howl,” and, according to the sign behind the register, it was also the birthplace of the café latte. Most important for Rosenfeld, it’s where he used to fuel up on cappuccinos while on deadline at the Daily Cal offices just up the block.

The walls are covered with photographs of sit-ins, riots and scruffy teenagers holding up signs lambasting the “pigs.” Flyers on a bulletin board advertise consciousness-raising sessions and meetings for Occupy Wall Street. A genial, unkempt fellow with his shirt tucked into his waist-high green sweatpants has already approached the table, requesting we vote for him in the upcoming mayoral election. With his khakis, navy blue blazer and brown leather oxfords, Rosenfeld is by far the squarest cat in the room.

He’s also the most ideologically subdued. When asked about his own politics, he politely demurs, claiming that his positions are “irrelevant,” instead aligning himself with the great muckraking tradition of Lincoln Steffens, Seymour Hersh, and Watergate reporters Bob Woodward and Carl Bernstein.

“I tried to rely as much as possible on the FBI’s own records and on official documents,” he says, stressing the importance of objectivity. “And then I spoke to people on all sides of the conflict.” He even corrects me when I refer to the passion that must have sustained his quest over the past few decades; describing it instead as “curiosity.”

Besides Hoover and Reagan, whom Rosenfeld never had the chance to interview — Reagan’s press people instead referred him to Ed Meese, who served as attorney general under Reagan and appears prominently in the book — the two chief protagonists of “Subversives” are Mario Savio, the troubled, charismatic leader of the Free Speech Movement, and Clark Kerr, the chancellor at UC Berkeley in the mid-’60s and Savio’s de facto chief antagonist within the administration.

The two men saw each other as ideological opponents. Kerr was in his 50s when Berkeley students began agitating for the right to distribute flyers and hold political meetings on campus. A true Cold War liberal, Kerr believed in freedom of speech but thought that politics — and therefore political activism — should be kept out of the university. In fact, Kerr had already incurred Hoover’s wrath by doing just that, when he refused to participate unilaterally in Hoover’s investigation of suspected Communists within Berkeley.

But Savio, a gifted 22-year-old graduate student from Manhattan’s Lower East Side, had spent the summer of 1964 in the Deep South with the Freedom Riders, watching local law enforcement turn police dogs and fire hoses on unarmed protestors. Three fellow riders, James Chaney, Andrew Goodman and Michael Schwerner, had been murdered in Mississippi. And perhaps most significant, Savio, who was born Catholic, had learned certain lessons from growing up in the shadow of the Holocaust.

“Savio had a very religious upbringing,” says Rosenfeld. “And one of the things that affected him growing up was the photos of Jews killed during the Holocaust. It made him question how people could acquiesce to such inhumanity and violence.”

Kerr, who died in 2003, told Rosenfeld that he’d “severely underestimated” the impact of the civil rights movement on the students of Berkeley. Kerr believed that politics should be kept out of the university environment out of principle, but many of the students who hadn’t risked their lives in the South that summer had still participated in various sit-ins and civil rights actions in the Bay Area.

“Savio saw the civil rights movement as a way of holding out hope,” says Rosenfeld. “A way to respond to obvious injustice such as the Holocaust.”

For Savio and the student protestors he helped inspire — not just in California but across the nation — the proven bad faith of American lawmakers in the South, the atmosphere of anti-Communist paranoia that had characterized the past decade and soon the escalating conflict in Vietnam rendered specious any division that university officials made between speech and action. As far as the protesters were concerned, Kerr was little more than a lackey.

We quit the café for a tour of the Berkeley campus, starting with Sproul Plaza, the site of some of the first and largest protests of the Cold War. We pass through the famous Sather Gate, where the words “Fiat Lux” (let there be light) are carved in steel. I ask whether Kerr and Savio, the liberal educator and the radical firebrand, could have found common ground if they’d met 15 years later and sat down for coffee. “It might have taken a lot longer than that,” Rosenfeld says. “There was quite a divide, and they were very far apart, years later.”

Ironically, Rosenfeld’s investigation has revealed that the two men had far more in common than they thought: Both were targeted by Hoover’s FBI, and both were professionally damaged by the bureau’s unlawful investigations. And both learned about the extent of the FBI’s interference with their lives through Rosenfeld. It was Rosenfeld who first showed Kerr documents indicating that Hoover had conspired to have him fired for not cooperating sufficiently with the FBI. Kerr was shocked. He had requested his own file years earlier and had been told it was unavailable. As for Savio, the FBI continued to keep his file open, and to investigate his activities, long after he had ceased all political activity and been declared a non-threat by the bureau’s own investigators.

While Kerr’s and Savio’s factions faced off against each other, the true subversives — the ones who sought to control the flow of information — turn out to have been the agents, provocateurs and informants of Hoover’s FBI, who operated freely with little or no oversight from the government of the democracy they had sworn to serve.

“One of the points of my book,” says Rosenfeld, his voice louder and clearer out in the open air of the quad, “is that the combination of secrecy and power is always potentially dangerous to democracy.”

We stop at Moffitt Library, a building that today also houses a student hangout called the Free Speech Movement Café. The building is locked, but in the late afternoon light we can see a poster-sized photo of Mario Savio through the window, and beneath it, Savio’s words: “To me, freedom of speech represents the very dignity of what a human being is. That’s what marks us off from the stones and the stars … as just below the angels.”

Sheerly Avni is a freelance writer based in New York and San Francisco.